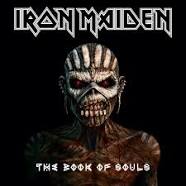 The latest 2 CD set from Iron Maiden, Book of Souls is packed with 11 tracks of absolutely epic Maiden material. Like all great CD’s, this double set will take a few listens to really take in everything offered to the listener. Book of Souls is everything that is Iron Maiden; Epic, Long Songs, Ridiculous guitar solos, over the top vocals with some of the best material the band has put out in quite some time.

CD 1, begins with If Eternity Should Fail which was written in it’s entirety by Dickenson. With an under current of a low rumbling, accompanied by a heralding keyboard, Dickenson’s voice echoes throughout, giving one the feel as if they stepped into a Mayan ruin from the album’s artwork.  The band kicks-in and we’re off into that epic Iron Maiden feel with dual guitar lines and those great Dickenson vocals. Near the middle of the song the band breaks with Nicko Mcbrain rolling around the toms, accompanied by Steve Harris on bass which really launches this song before returning to song’s main theme. Speed of Light is straight ahead Rock and Roll that is just begging to be played live. Dickenson enters with a wailing scream followed by killer guitar solos, dual guitar lines and an end that’s meant for the big stage, this one is gonna kill-it live.

The Great Unknown leads with Dickenson singing over guitars and bass lines that are the main melody of the song. It’s a steadfast steam roller with a driving chorus that is classic Iron Maiden. The song winds down as it began with an underlying synth, guitars, bass and Dickenson fading out on the last note.

The Red and The Black is the longest track on CD 1 and probably the most epic song on  the Book of Souls. As the verse guitars crunch and churn, another guitar mocks Dickenson’s every word. The lead-in to the chorus has somewhat of a poppish vocal with the “Whoa-oh-oh’s” chant but this gives way to a chorus of brilliant guitar and vocal lines. The songs sets itself apart from the rest of the 2 CD set with one epic, signature guitar line after another. This will be the pièces de résistance live. Absolutely brilliant.

When the River Runs Deep continues in true Maiden fashion with it’s double time verses and 1/2 time choruses. The guitar solo is intense in it’s double time phase and becomes stellar when it moves into the 1/2 section of the solo.

Book of Souls rounds out CD 1 starting with it’s gentle acoustic guitar that quickly becomes a heavy smack you down head cruncher. Half way through, the song is propelled by the shuffle groove guitar solo, complete with signature guitar and vocal lines.  Then almost without warning Dickenson re-enters for one line as he leaves you where you started with that acoustic guitar taking you into the last breath of CD 1.