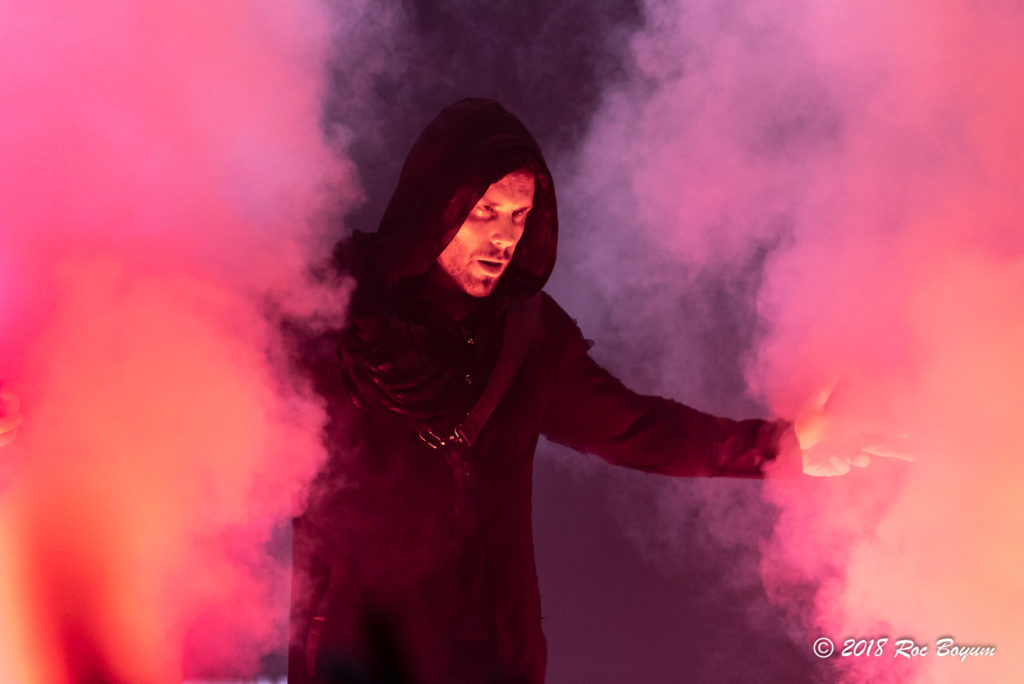 Kamelot,delivers a spellbinding show with support from Delain and show opener Battle Beast. 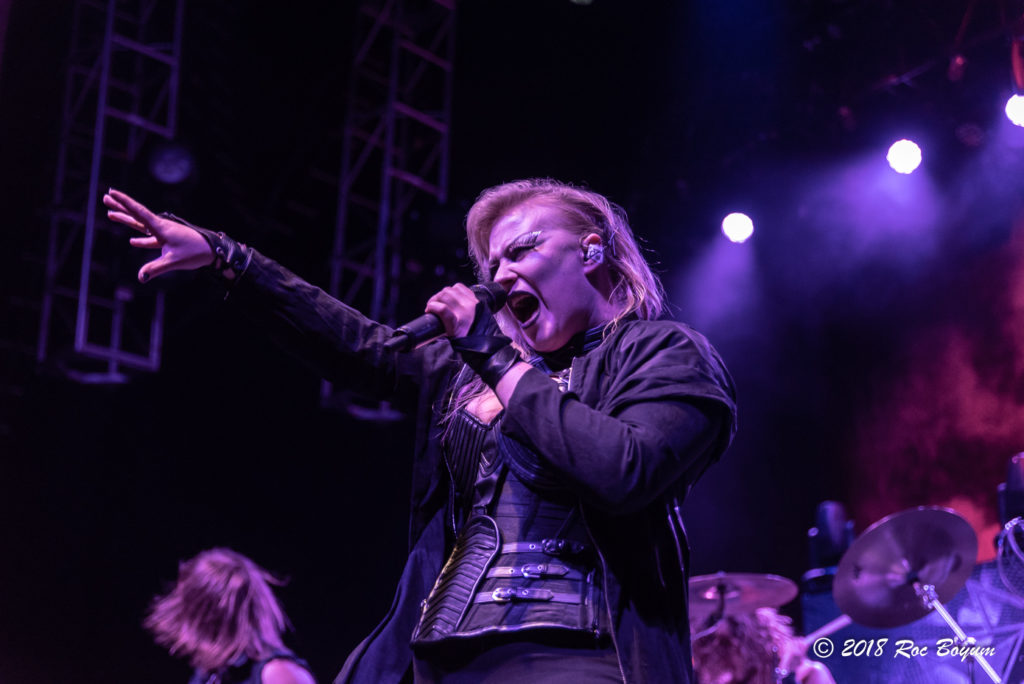 Finnish power metal masters Battle Beast, seized the audience and stage from their first song, Straight to the “Heart” from their latest 2017 release; LP Bringer of Pain. Fronted by vocal power songstress Noora Louhimo, these Finnish Power Metal masters thrust upon the audience a relentless force of infectious energy that incited fist pumping and head banging throughout their entire set.

For those unfamiliar with Battle Beast, the band’s musical force felt like a sucker punch. The crowd was a collective seething mass of thrashing bodies that were singing to every song. Those new to the Battle Beast party were left saying; where did these guys come from and what the HELL was that, I just got completely blown away!!!.

Be sure to check these guys out and join the Battle Beast army; you’re gonna have fun!

Check out the Battle Beast Photo Gallery from the City National Grove here! 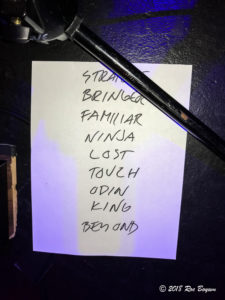 Delain, led by the illustrious vocals and dynamic front woman, Charlotte Wessels was up next. The band are no strangers to The City National Grove as evidenced by their serious Southern California following of intense fans who showed up in full support of this great band from the Netherlands. 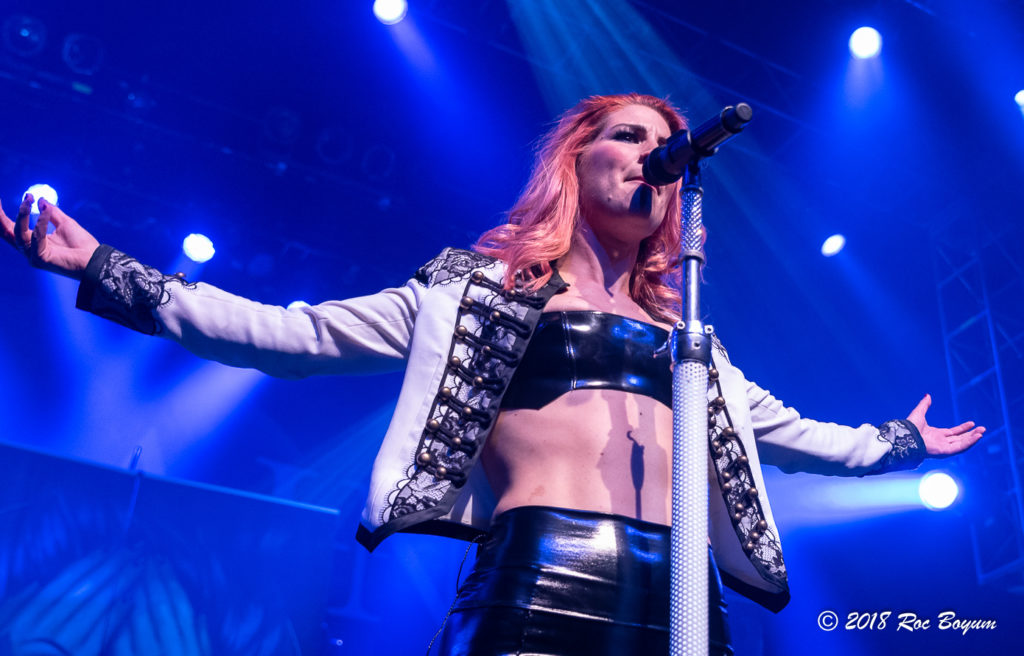 While Delain may not be quite as musically metal as Battle Beast, that didn’t really matter to this venue full of their truly dedicated fans who were wearing Delain T-Shirts and singing along with Wessel’s every word. On this night, the band presented a mood that seemed a little darker than on previous shows which suited the band and their devoted metal crowd with their non-stop horns in the air! Delain’s 10 song set was strong, including the fan favorites, Hurricane, Fire with Fire and of course, We are the Others from the 2012 LP of the same name; a song that was inspired by the tragic UK Sohpie Lancaster case.  A song that calls for acceptance no matter how you may differ from the… perceived norm! 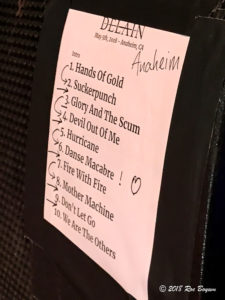 It was finally time for the Sorcery of Power Metal Masters Kamelot who are currently on tour in support of their April 6, 2018 release titled The Shadow Theory via Napalm Records. The Shadow Theory is gaining high praise from critics and fans alike and is definitely one of their best efforts to date! The LP is a 2 CD package with special guest artists, Lauren Hart-Once Human, Jennifer Haben– Beyond The Black and the LP’s acclaimed producer Sascha Paeth.

From a darkened room the stage was instantly lit up with flashing strobes and shooting plumes of smoke to the heavy/driving beginning of Phantom Divine from their latest LP The Shadow Theory. Cloaked in a Hoodie, lead singer Tommy Karevik emerged on stage to a sea of Horns from the the entire Anaheim Grove Audience. Much of the stage was obscured by smoke offering only mere glimpses of all who were performing. Additional vocals could be heard but exactly who was singing was not clear until all at once a clearing of the smoke revealed the soaring vocals of Once Human’s frontwoman, Lauren Hart. Kamelot and special guest artist Lauren Hart came out of the gate with a powerful intensity, exuding a mighty force that set a precedence for an incredible night to come. 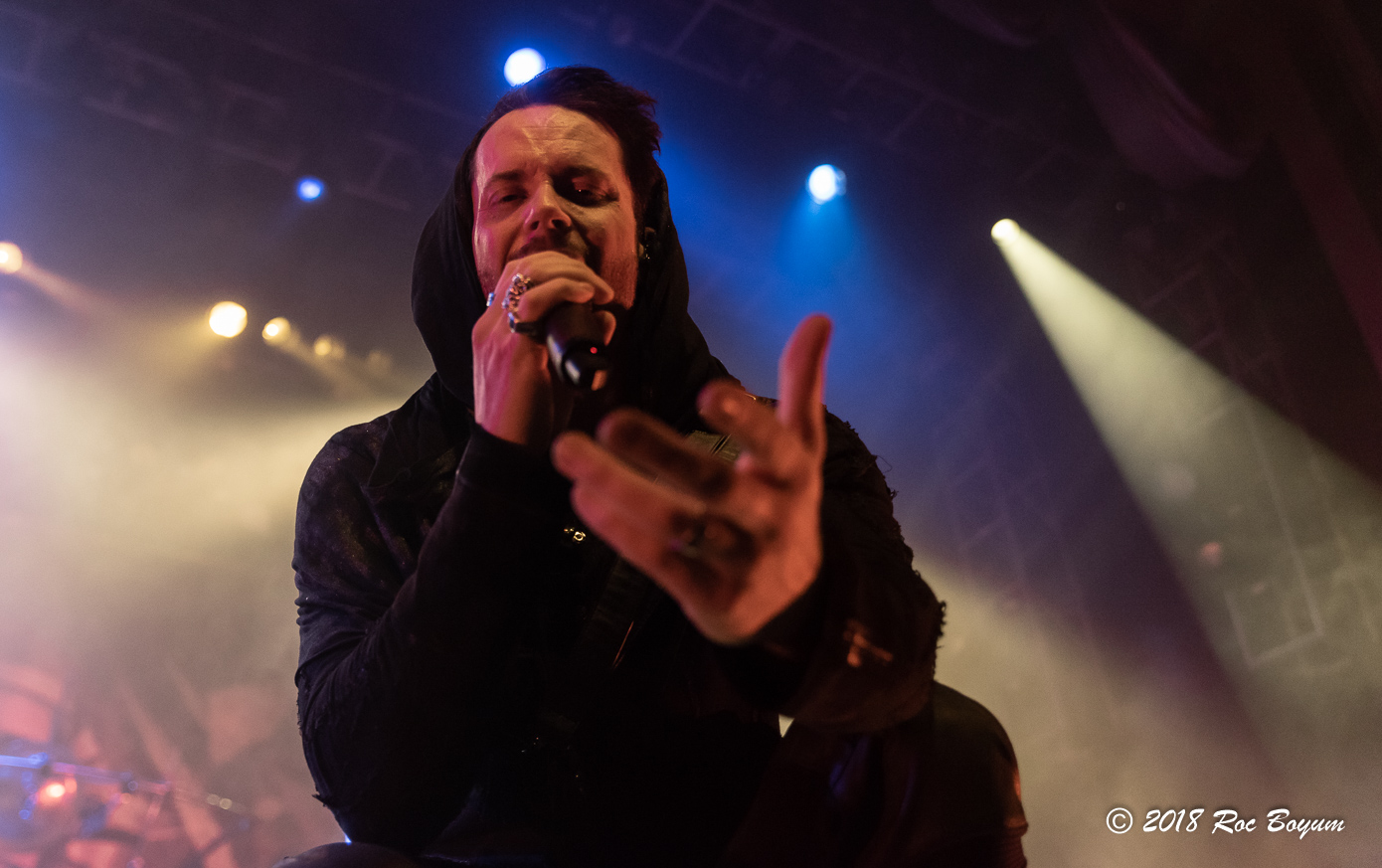 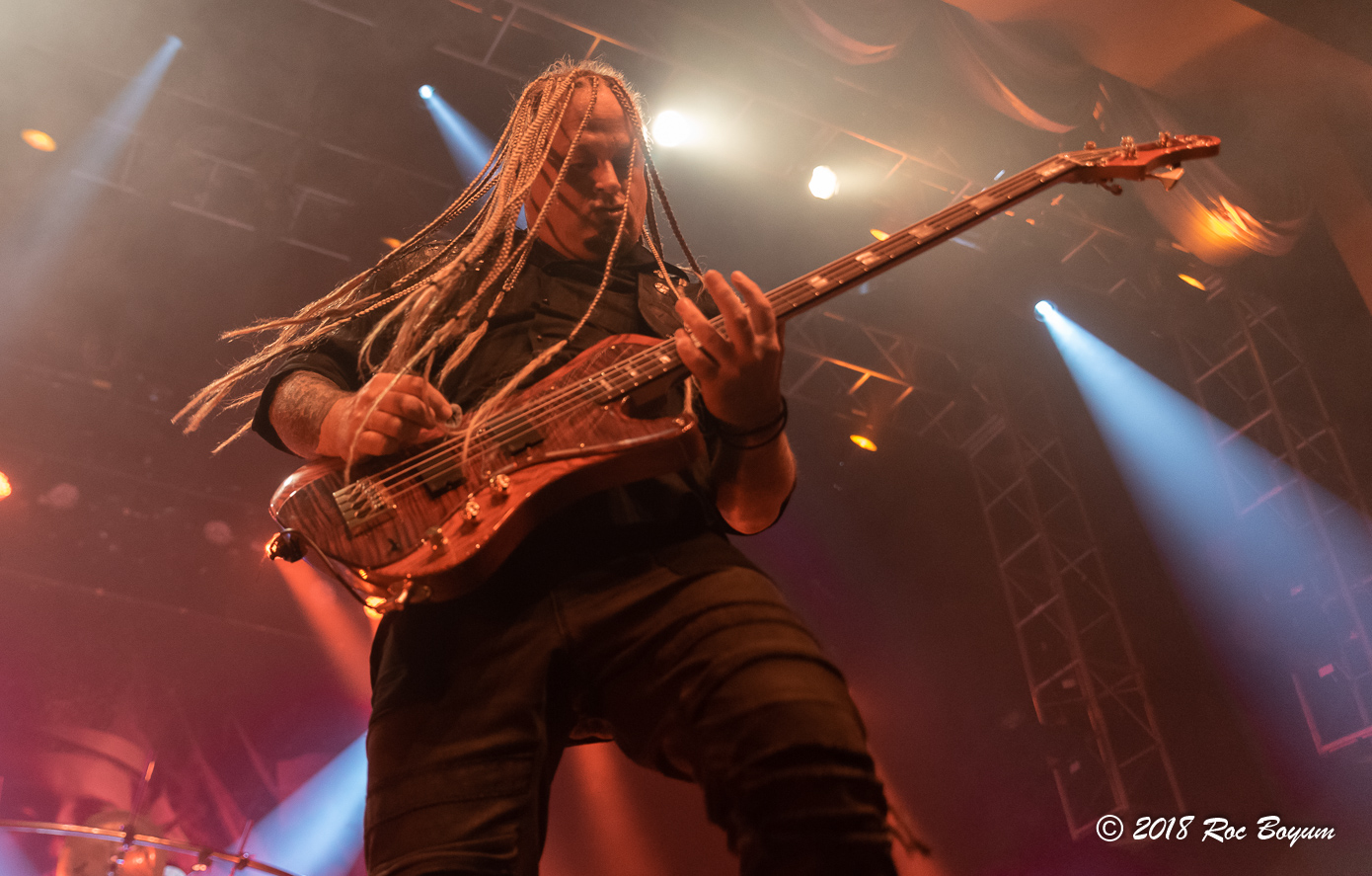 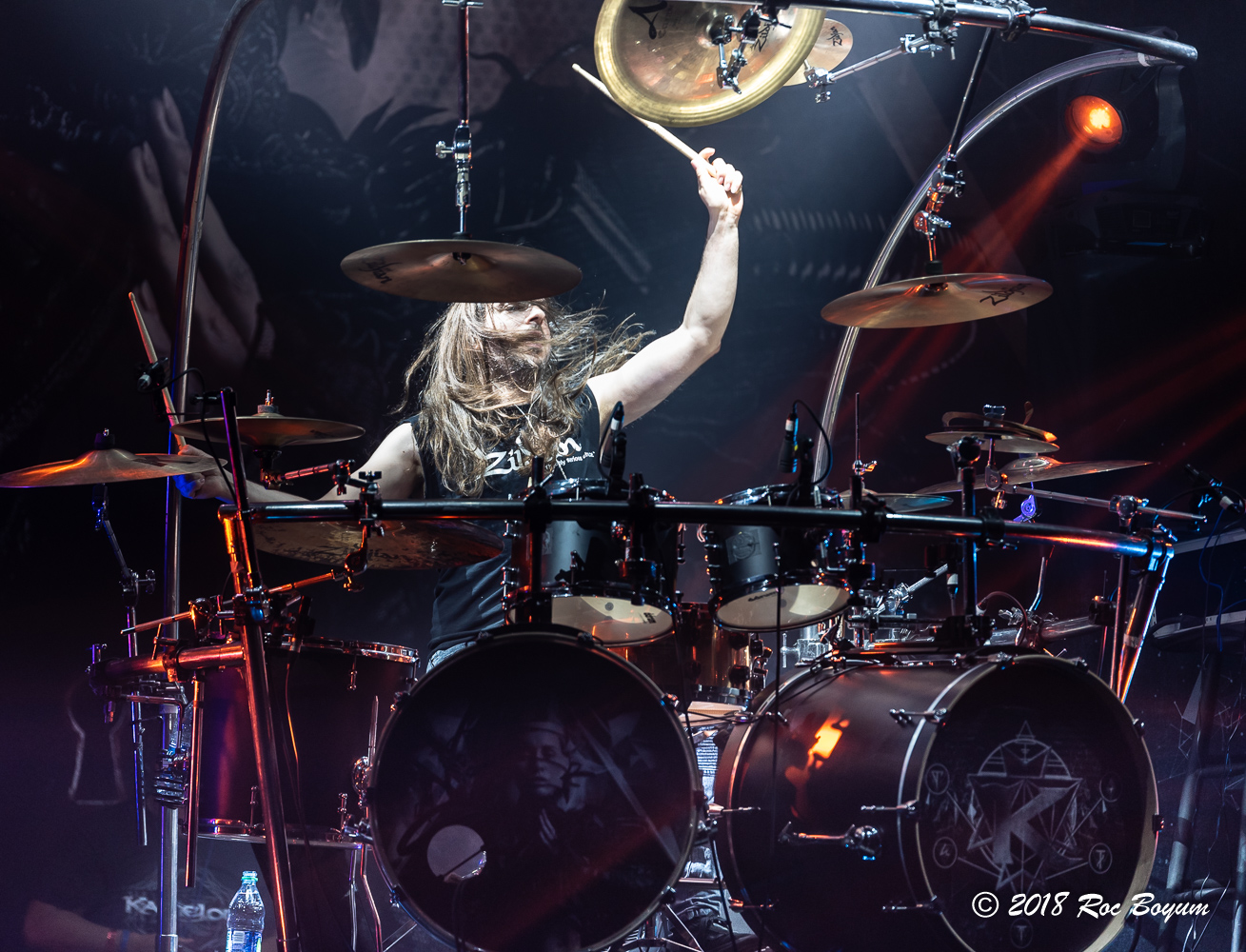 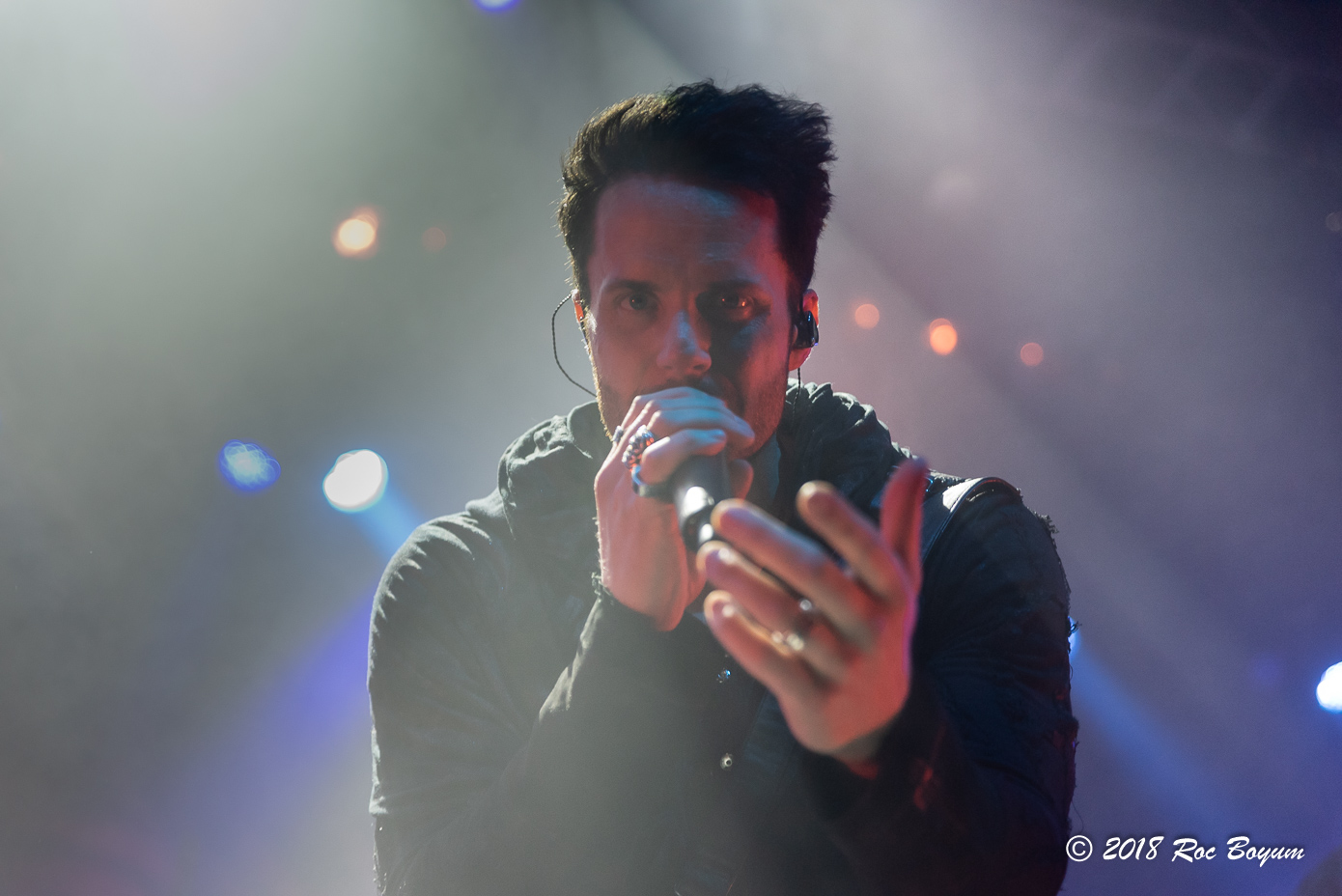 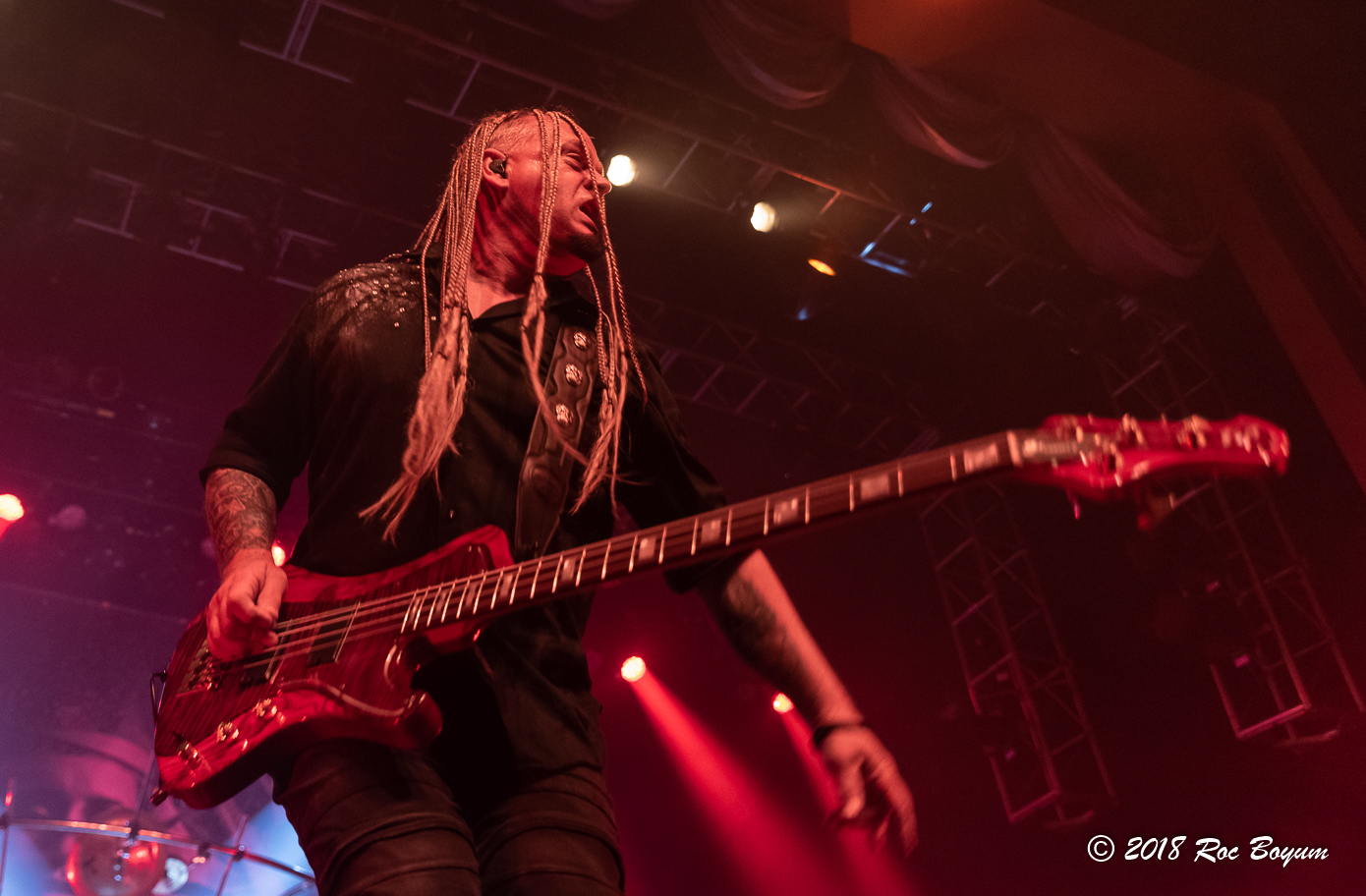 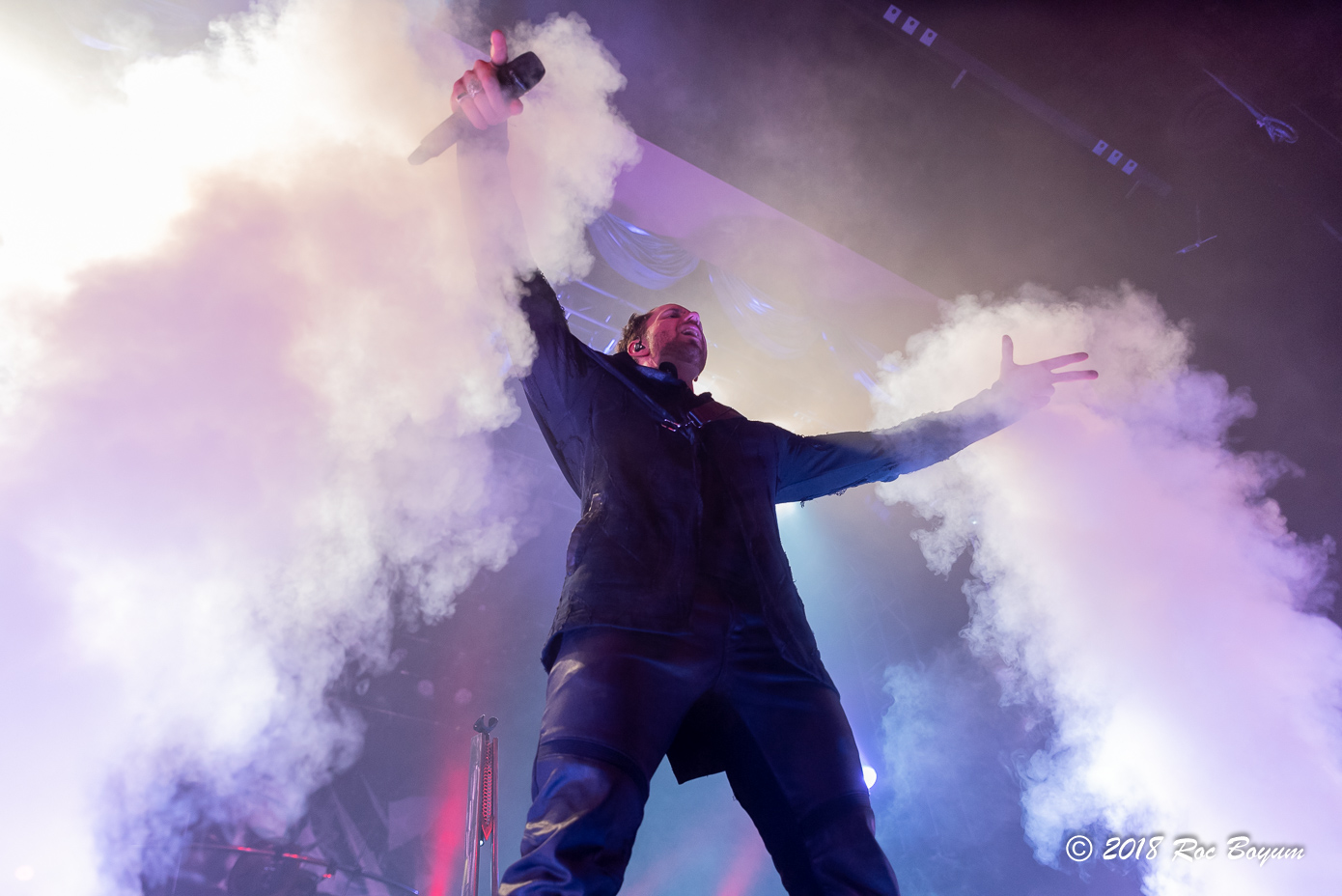 The band presented a 16 song set covering 7 albums while culling nearly 50% of the material from their Haven and The Shadow Theory LP’s respectively.

The awesome energy of the band seemed particularly high this night and propelling the forward is the new crazy new drumming force of Alex Landenburg. Landenburg replaced drummer Johan Nunez who was the intended permanent replacement for long time drummer Casey Grillo. Nunez unfortunately had to step down from the drum chair just three months after starting up with Kamelot. Nunez joined Kamelot in February of 2018 and was side lined in April of 2018 due to an unforeseen injury during their 2018 North American tour.

The Anaheim crowd must also be given credit for the band’s supercharged energy as they fired these guys up at every opportunity when the band asked them to cheer; especially when Karevik brought forth his imaginary “volume knob”.  Those familiar with Kamelot’s show know that at some point, Karevik will invite sections of the audience to roar louder and louder with each turn of this imaginary volume knob. This of course becomes a competition between the different sections of the audience to see who can respond with the loudest roar. The entire Anaheim audience was a winner this evening as all sections cheered and roared exceptionally loud, leaving the band with appreciative smiles. 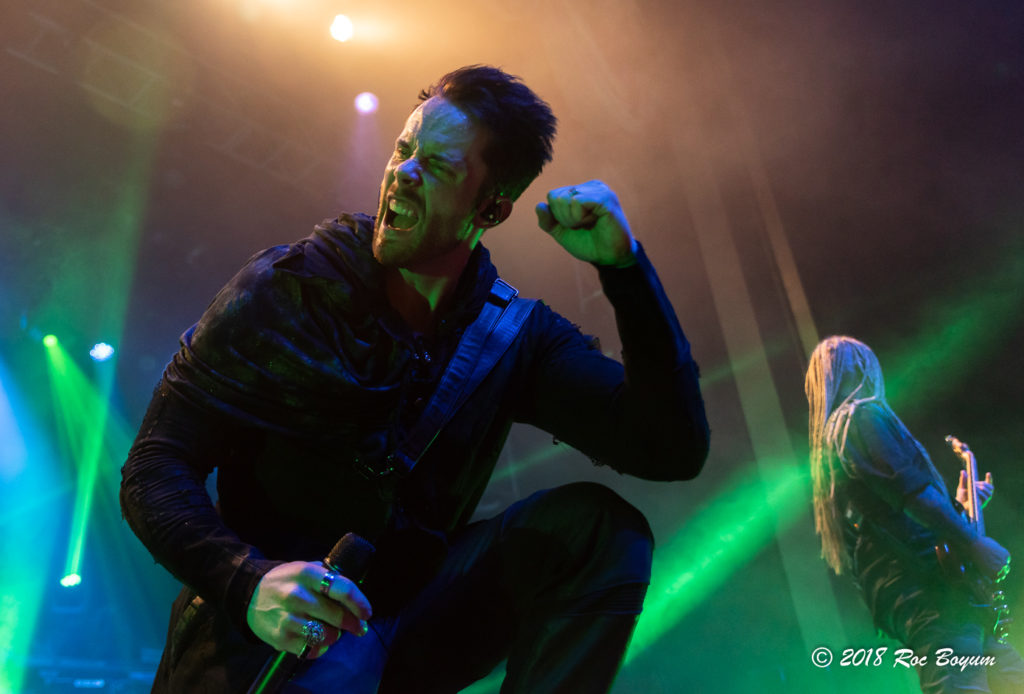 Karevik introduced the song Eysium by saying, we’re going to slow it down a bit and asked the audience to hold up their lights; the Grove became a sea of lighted cell phones waving back and forth throughout the song.  From there the band picked up the pace with Here’s to the Fall and Ravenlight before Alex Landenburg was a single lighted figure on stage who tore through a blistering drum solo, displaying a mix of great technique, heavy hitting and a solid dose of rock and roll entertainment! 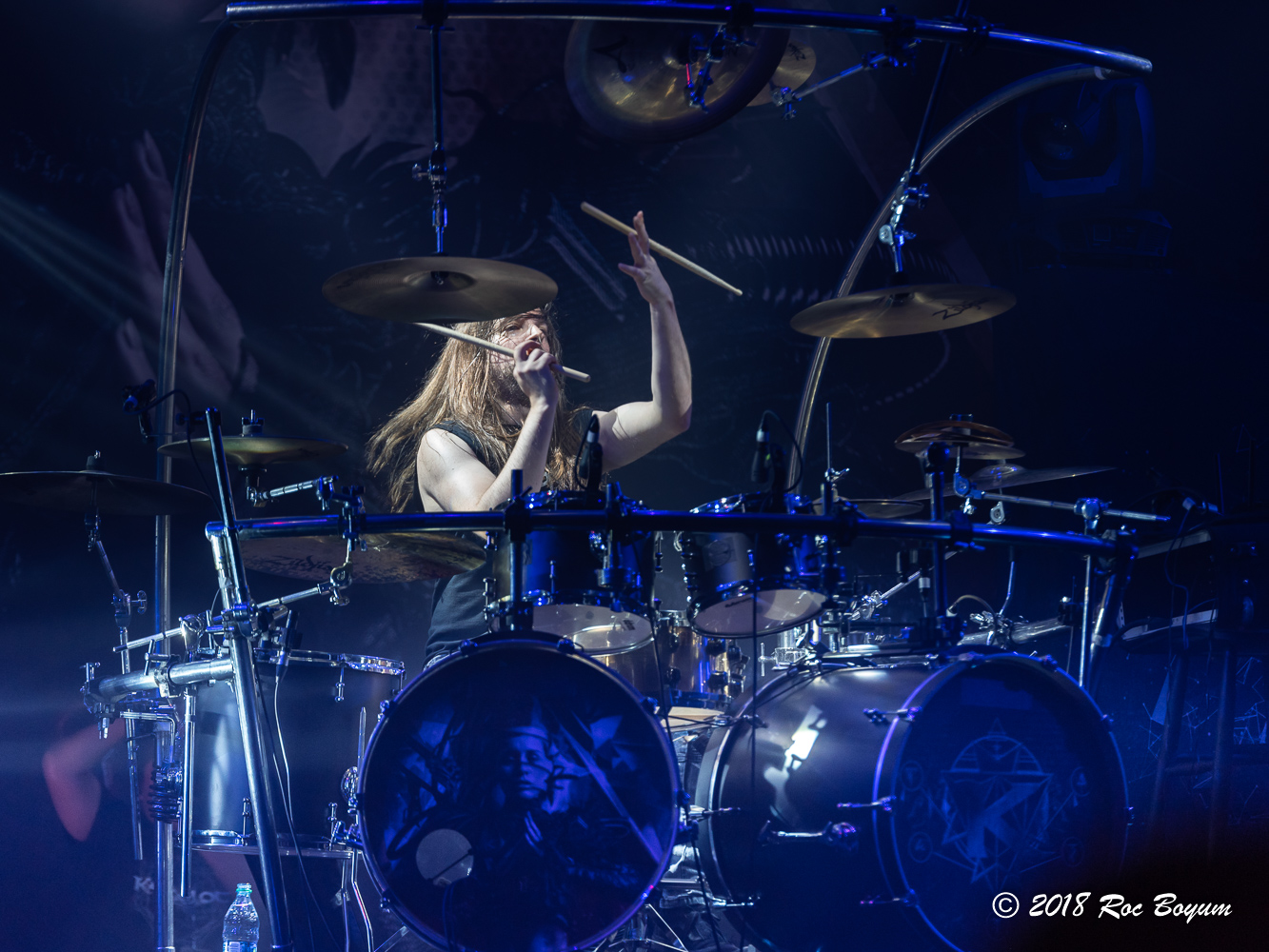 It was the guest artists that catapulted the Anaheim audience into a frenzy that tore through the venue with a frantic rage.  Charlotte Wessels-(Delain) sang a duet with Karevik on Sacrimony with additional vocals by Lauren Hart–(Once Human).Then all hell broke loose as guitar virtuoso Herman Li-(DragonForce) appeared on stage and joined forces with Kamelot and Thomas Youngblood on Forever for some truly burning guitar solos. The band finished the night with an awesome version Liar Liar from their Haven LP which featured Lauren Hart who took on the part originally sung by Allisa White-Gluz Arch Enemy. 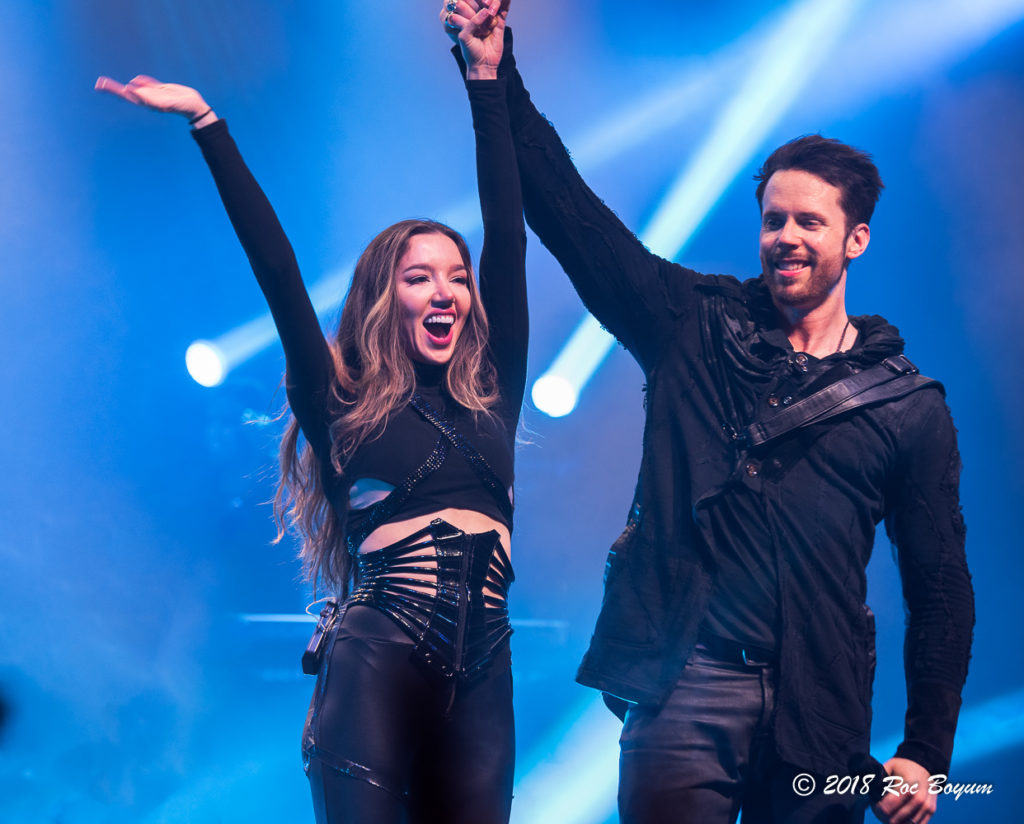 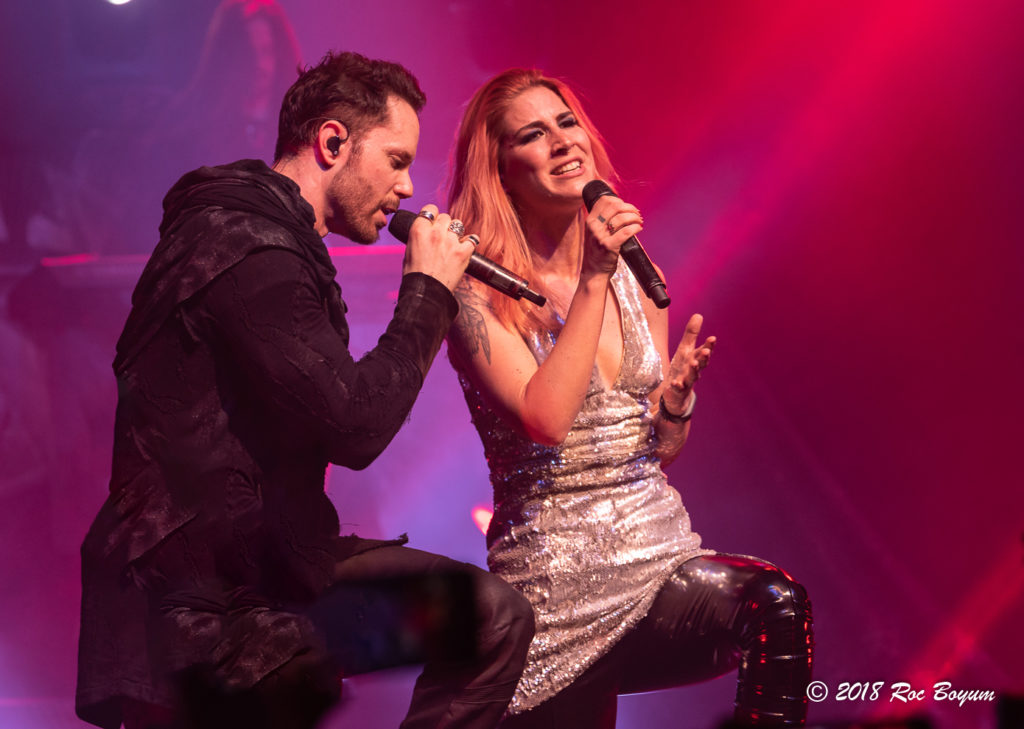 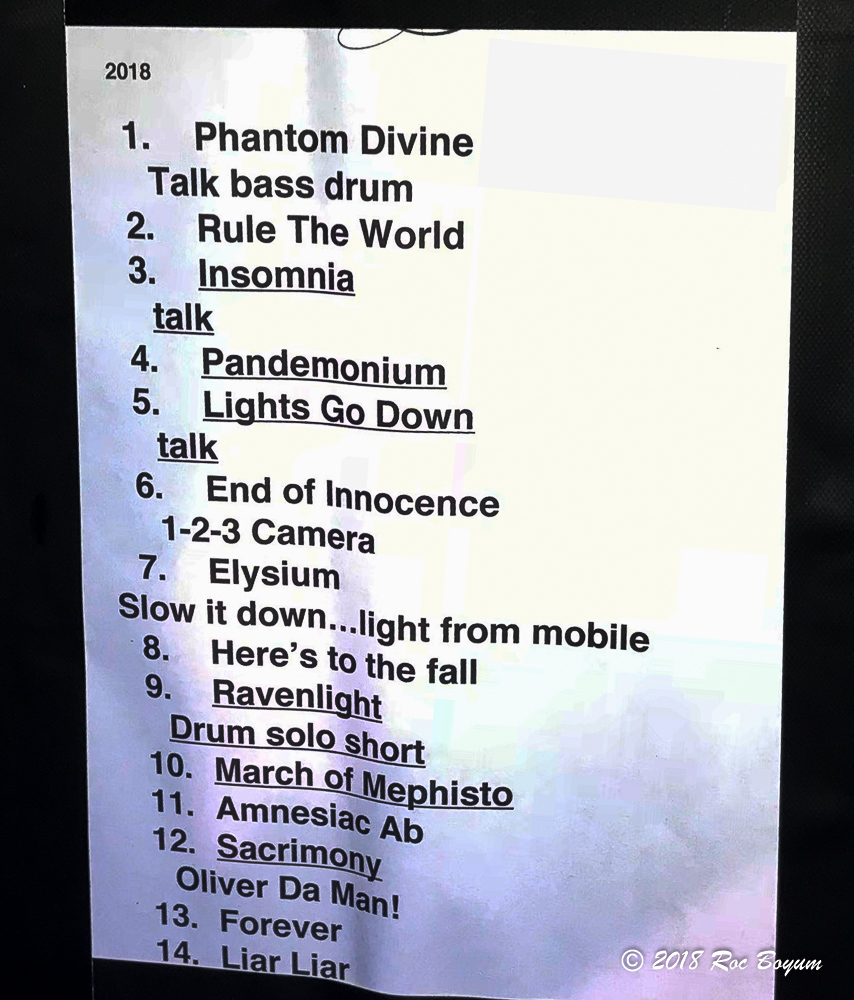