Apocalyptica are a rock/metal cello group that goes way beyond the confines of conventional thinking. That is to say, these guys are in no way a string quartet in the traditional sense. So, don’t expect a night of seated cellists playing chamber music; these guys are on their feet the whole time, rocking the hell out of their instruments! The three cellists are, Eicca Toppinen-band leader and lead cello, Perttu Kivilaakso,-lead cello, Paavo Lötjönen -rhythm/bass cello and they are also accompanied by jazz/rock drummer Mikko Sirén. In addition, they featured guest vocalist Franky Perez, on several songs.

The musicianship in this band is second to none without question, but that’s somewhat expected by most musicians who are classically trained. What’s unexpected, is how badass these guys can rock a cello; I mean a “cello” isn’t necessarily the first instrument that comes to mind when you think of a rock/metal string instrument. Although, to be honest, if you’ve ever heard of these guys, then you’re probably familiar with their first release, the groundbreaking 1996 LP titled, “Plays Metallica By Four Cellos” which is truly a brilliant LP and a not so subtle hint that these guys are not your average cello players.

This headline tour for Apocalyptica, was originally scheduled to commence in 2020 but was obviously canceled due to the global shutdown with their rescheduled 2021 tour falling victim to the same circumstances. Now, with the “new normal” settling in and tours opening up again, their headline tour is finally here with their special guest artist; the Italian Metal Masters, Lacuna Coil, and let me tell you; this show was definitely worth the wait.

Apocalyptica started their set with “Ashes of The Modern World” from their latest 2020 release, “CELL-O”. Under the guise of a darkened stage, came an eerie droning sound, and the pounding staccato accents of drummer Mikko Sirén that were simultaneously punctuated by flashing strobe lights that ushered in the beginning to “Ashes of The Modern World.” This instrumental starts off with a slow grinding badass half time groove in 4/4 that often sounds or feels like an odd meter; thanks to drummer Mikko Sirén with his over the bar line drum fill phrasing that can end on a downbeat of three in the next measure. Midway in the song, the tempo sparks into a driving double time rhythm that has all three cellists in a line at the front of the stage, bowing their cellos like Jimmy Page on steroids. The song concludes with a refrain of the song’s half time instrumental beginning with a badass heavy grinding rhythm that churns under the blistering solo by Perttu Kivilaakso that drives the song to it’s final rhythmic end.

The band then featured the next two songs, “Path “and “Grace” which are both brilliant instrumentals. As a special treat for the audience, singer Franky Perez joined the band on stage for the forth and fifth songs, “I’m Not Jesus” and Nothing Strong Enough” respectively. Singer Franky Perez offers an awesome dynamic change in the Apocalyptica set, with his masterful voice and impassioned words that aid in pushing the boundaries of their music. Jazz/rock drummer Mikko Sirén gave an amazing performance with his grooves and dynamics that followed the ebb and flow of their music perfectly. Sirén’s jazz influence gave his musical phrasing a particularly nice edge that contained counterpoint accents that were not always landing on the downbeat of “one” as in traditional rock drumming, all the while maintaining some serious rock drumming power that is always propelling the band forward.

The song “Shadow Maker” from their LP of the same title, features some dynamic Cello plucking breaks and great vocals by Franky Perez. Perez’s vocals in the song range form emotional to aggressive throughout, and are accompanied by Eicca Toppinen with some really nice backing vocals.

“Shadow Maker” is one of the bands’ most dynamic and intense rockers, and lyrically is about a “Svengali” figure, a “Shadowmaker”, who slowly chokes out your life with his gripping mind control. The song’s middle section goes into a ripping overdrive in double time that then changes into a rolling double bass drum triplet feel – all the while, Perttu Kivilaakso executes a screaming Cello solo over the top of the blistering rhythms. During the previously mentioned section, singer Perez comes around to the back of Sirén’s drum kit to join him on percussion. Perez, who did not want to miss out on the fun, unleashed an aggressive assault on the large percussive sheet metal cylinders that were suspended in the air behind the drummer to help propel the musical carnage. This section ends in a “rubato” time feel that gradually slows down to a final crashing end with a momentary period of silence that gives way to the acapella voice of Perez, who leads the band back into the song. The song finally concludes with the shouting vocal lyrics that are an insistent demand to, Back the Fuck UP, Back the Fuck UP; that are aimed at the “Svengali” character in the song’s video to take your “Shadowmaker” ways and, “Back the Fuck UP”!

The Apocalyptica experience would not be complete without a few brilliant metal covers by Metallica and Sepultura with the songs “Nothing Else Matters”, and “Seek and Destroy” by Metallica and “Inquisition Symphony” by Sepultura. The Sepultura cover was practically amazing with the cellists replicating and effectively executing the song’s guitar rapid fire 32nd staccato notes on cellos; how crazy is that! The song of course comes with the metal theatrics of head spinning by Toppinen and Kivilaakso, with Toppinen holding his cello over his head and playing vigorously. By the way, a cello isn’t necessarily that heavy to hold up but considering it’s bottom heavy, holding the damn thing over your head by the neck is probably most awkward and hell on your wrist, but hey; that’s all in the name of entertainment!

The two encore songs were “Farewell” and “In the Hall of the Mountain King”. The latter song is the only real classically derived piece music in their set which was originally composed in 1875 by the Norwegian composer Edvard Greig. This song is a classical piece that contains many of the grandiose hallmarks that we associate with classical music finales. The song has a coda or outro that harks back to the beginning musical theme in the song that continues to accelerate in tempo until the final crashing end. The song’s final ending includes huge cymbal crashes and deliberate string attacks that are synonymous with the over the top and dramatic classical endings, we’ve all come to know and love.

Don’t be afraid of the sophistication of the Cello! Get out there and see an Apocalyptica show now! Their show is a show like no other and a lot more metal than many metal bands out there – all the while exploding with some true musical excellence! 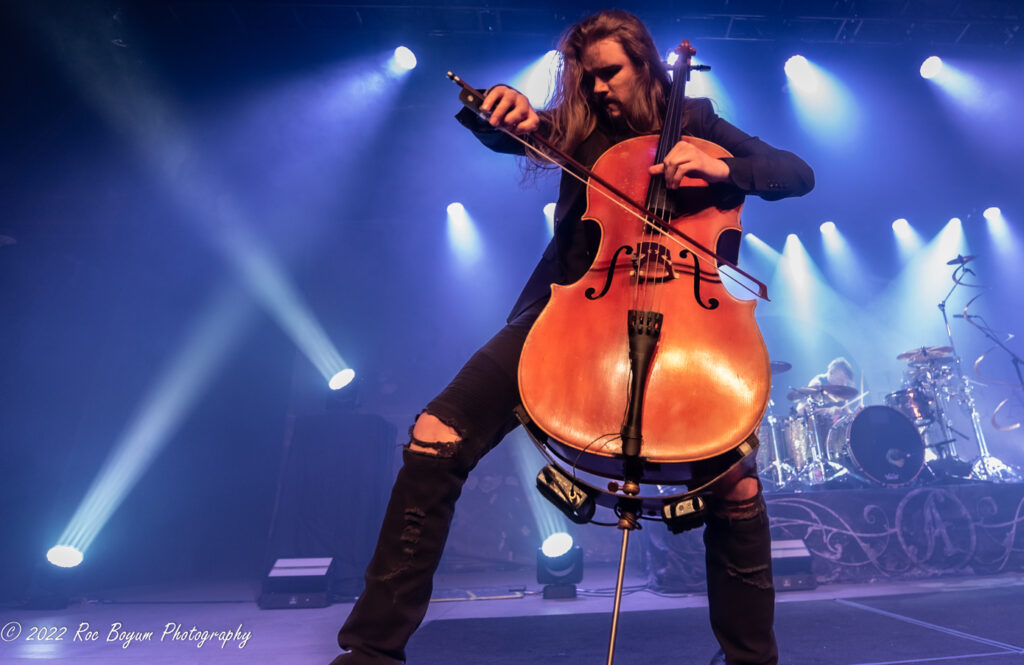 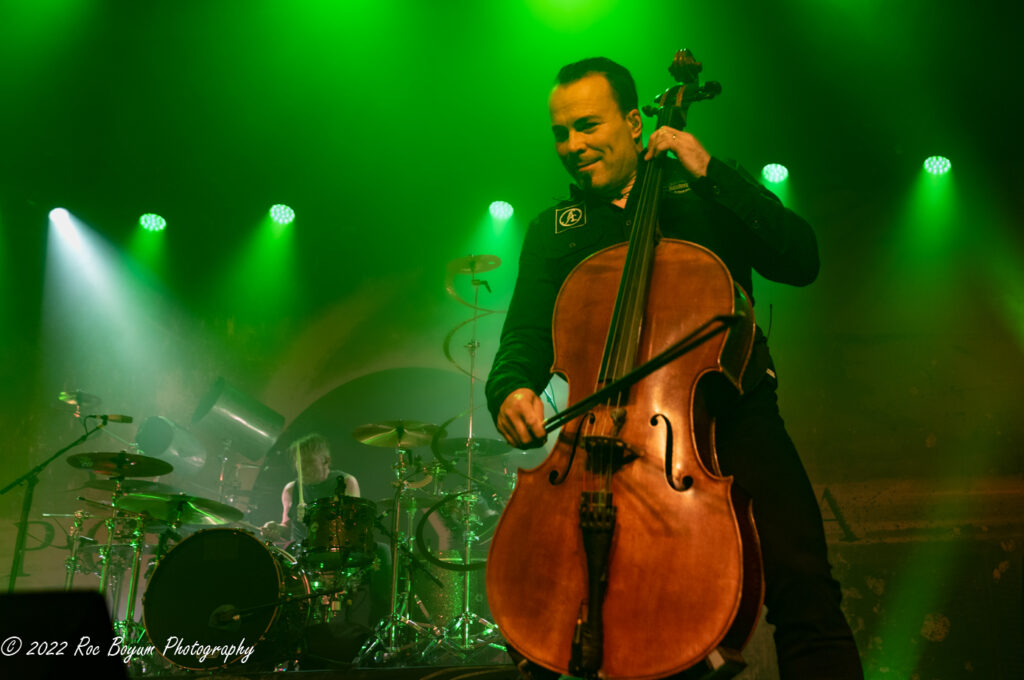 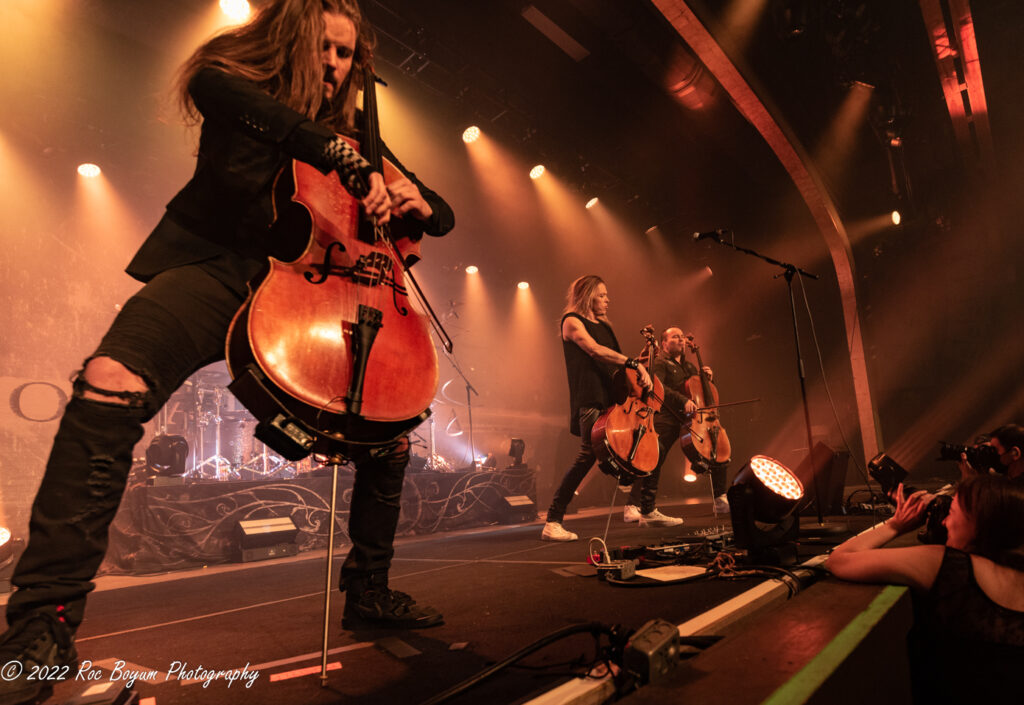 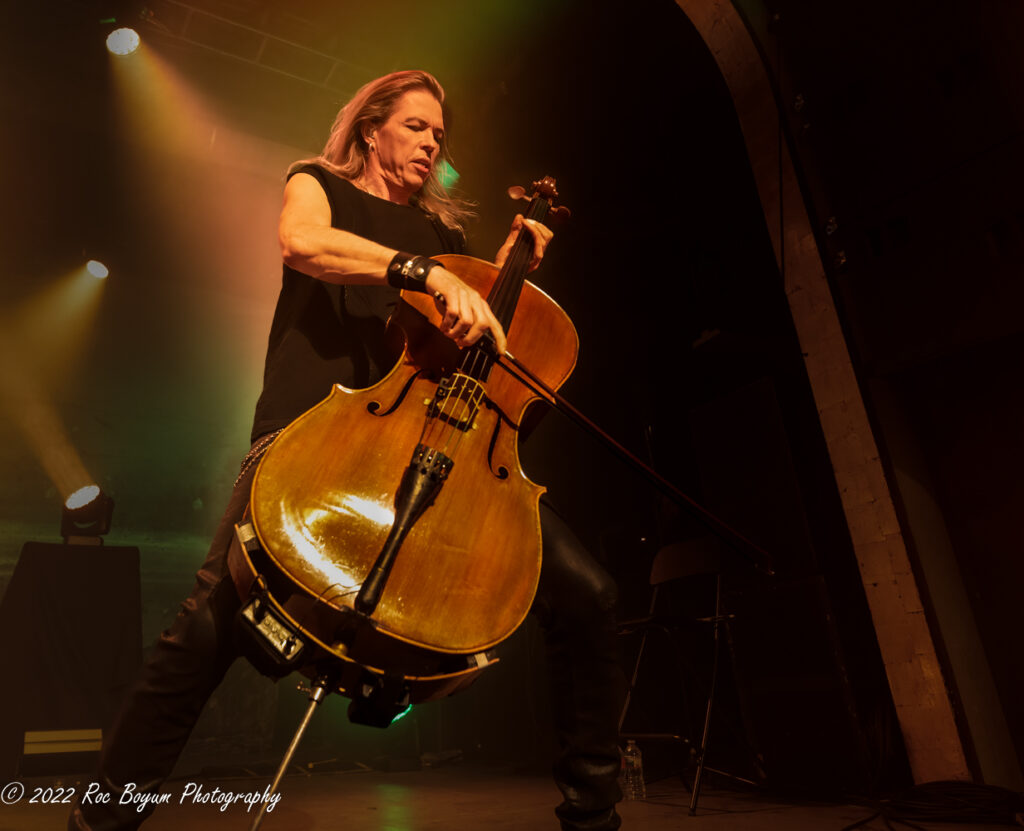 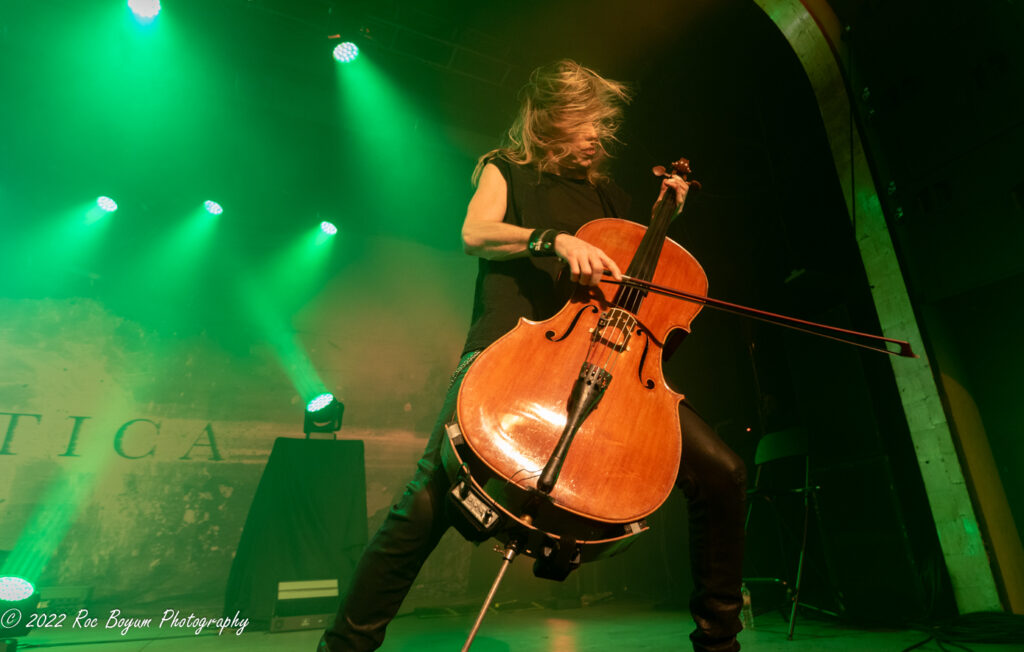 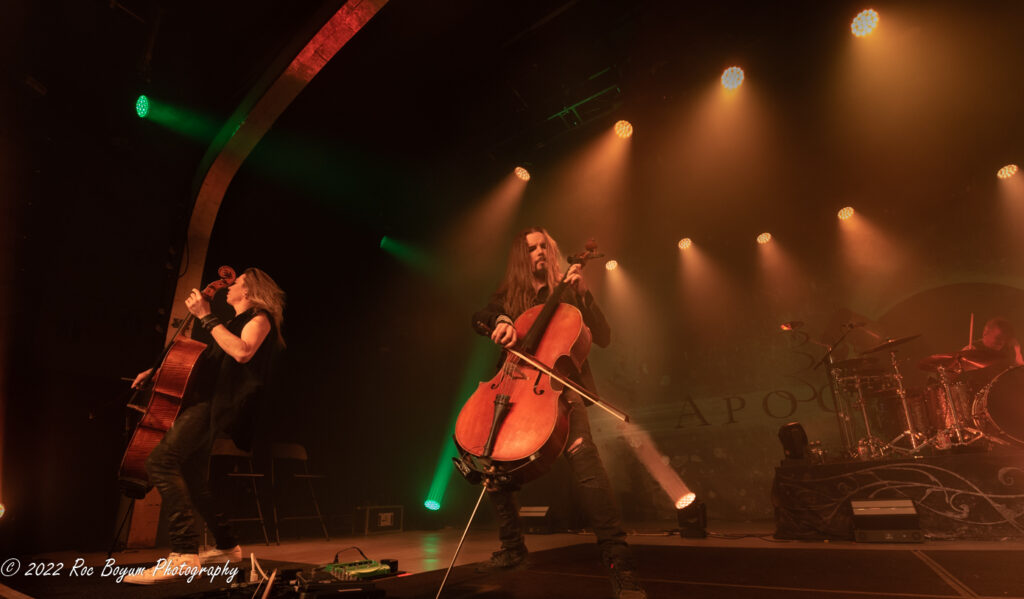 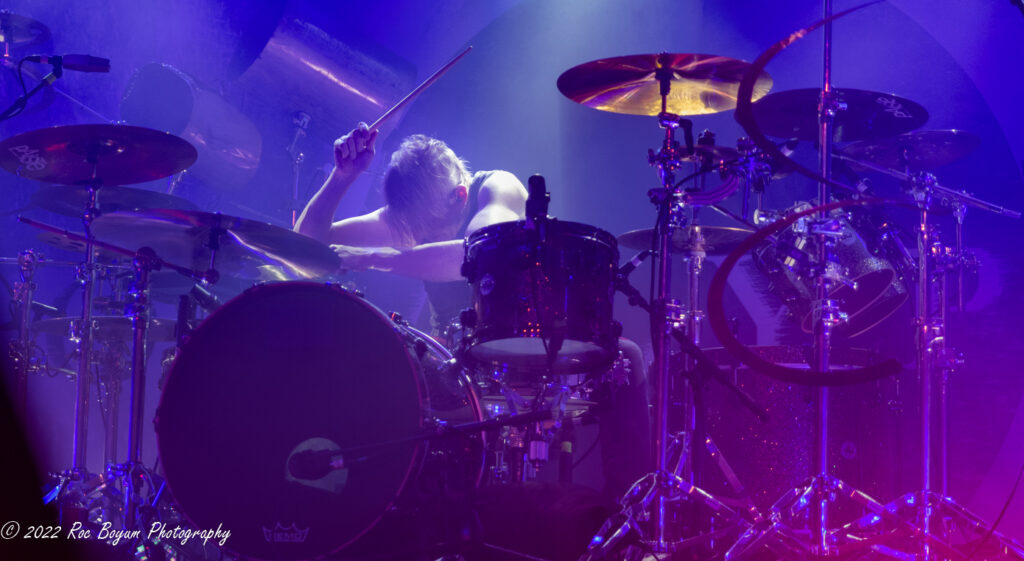 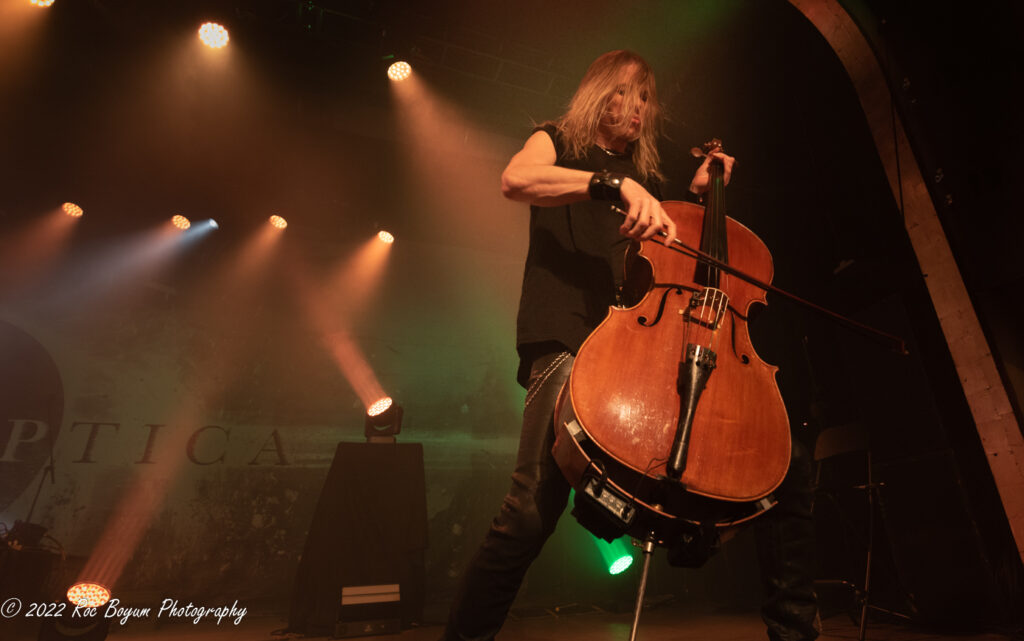 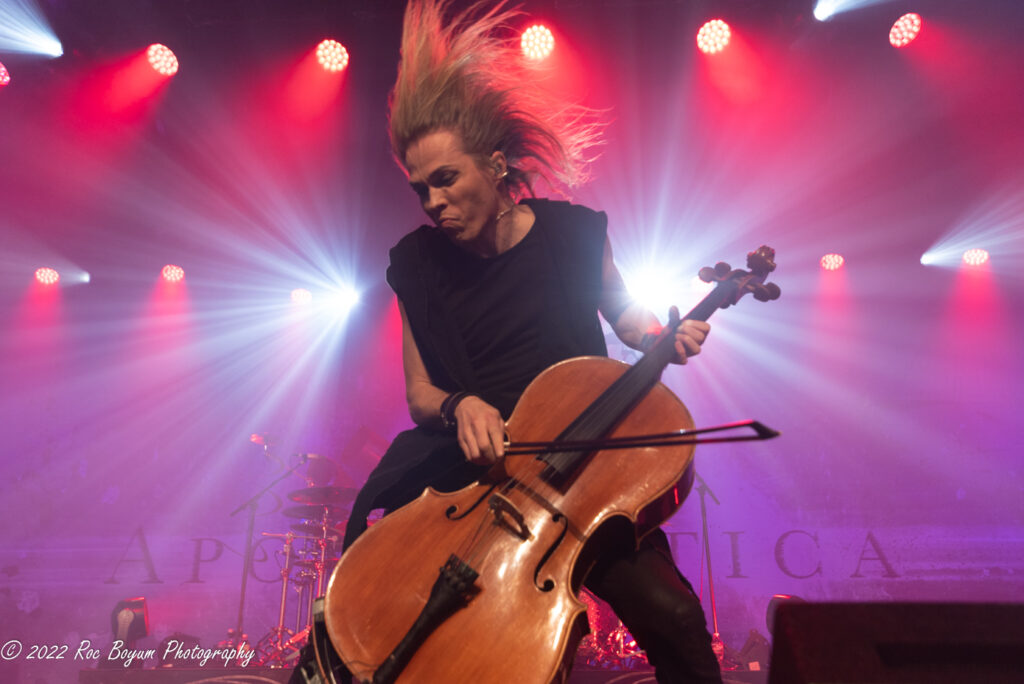 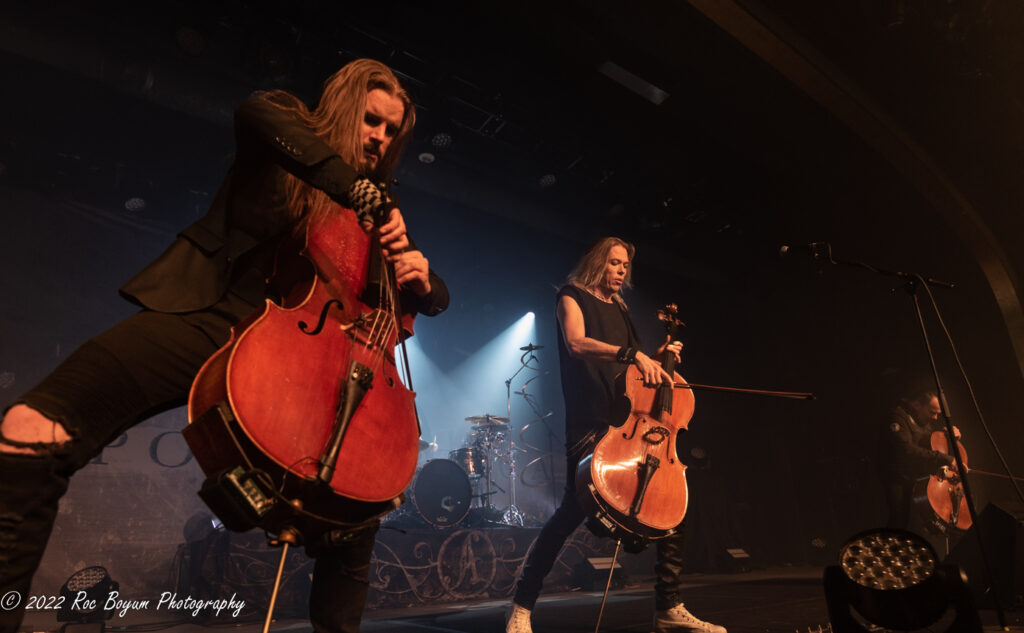 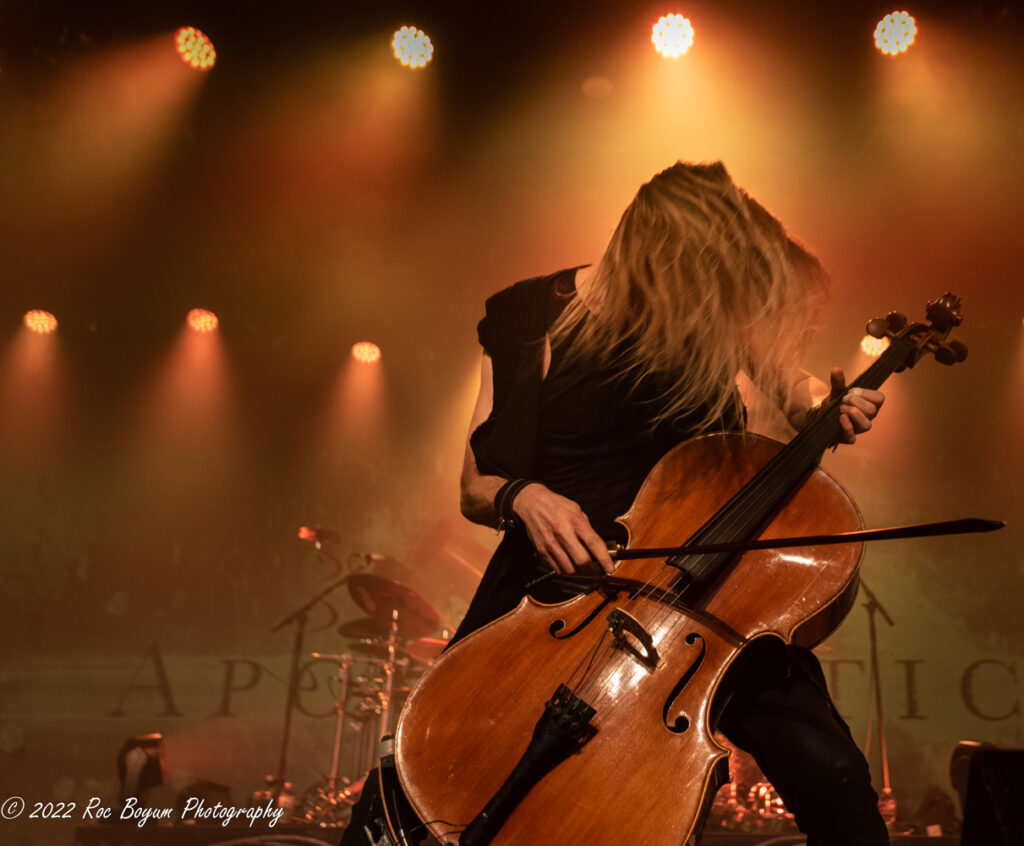 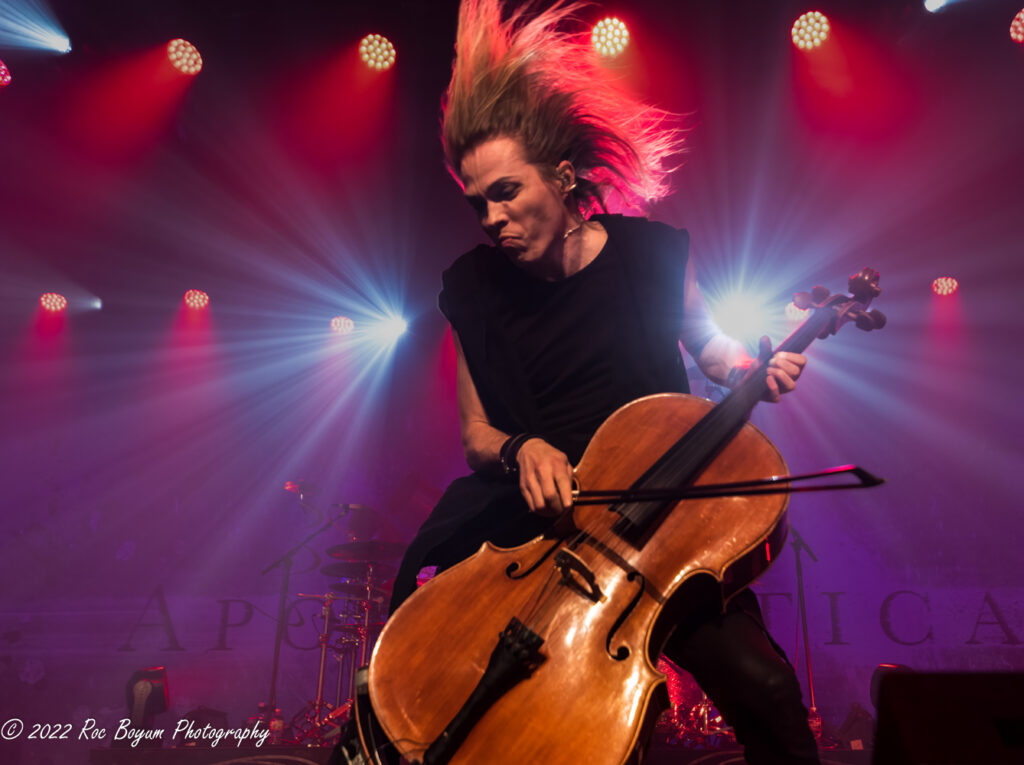 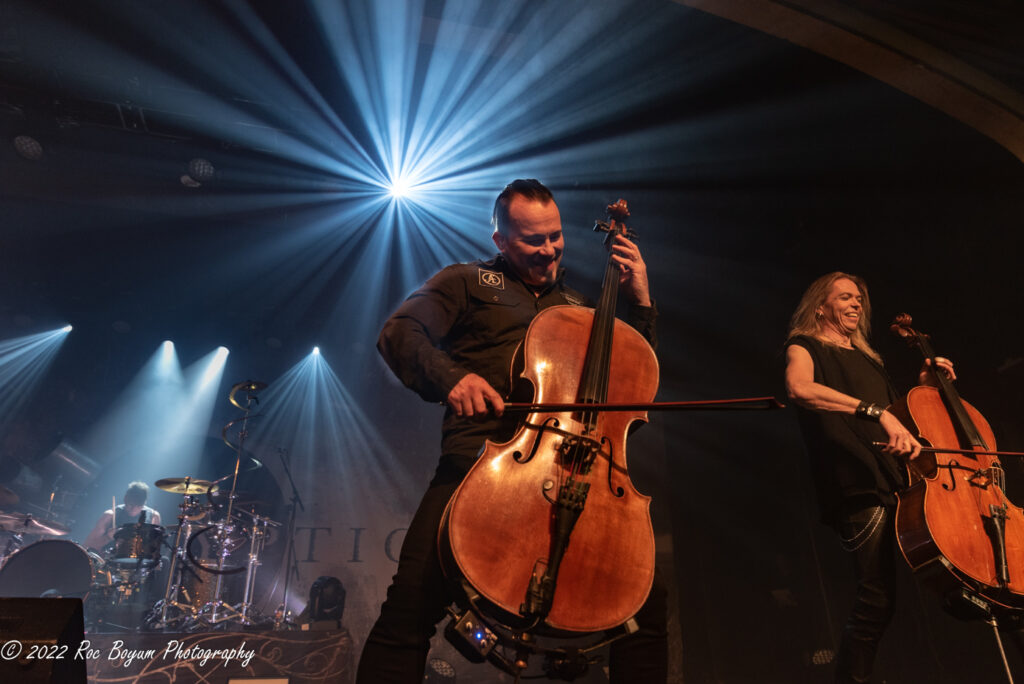 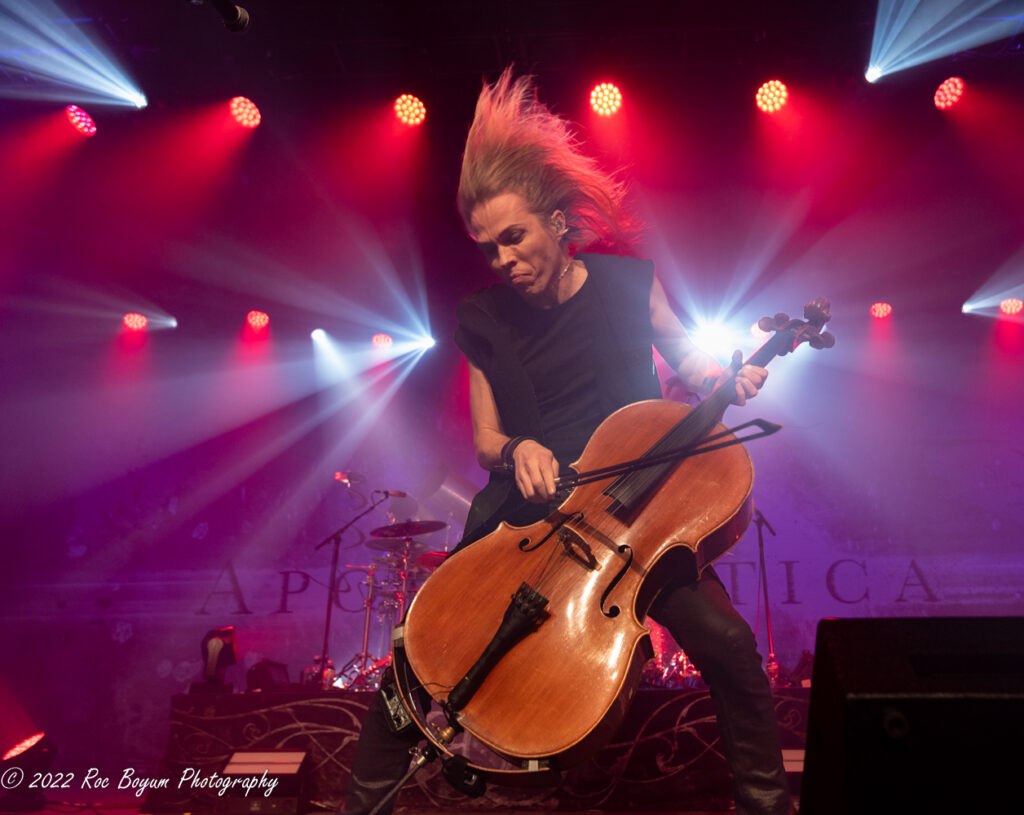 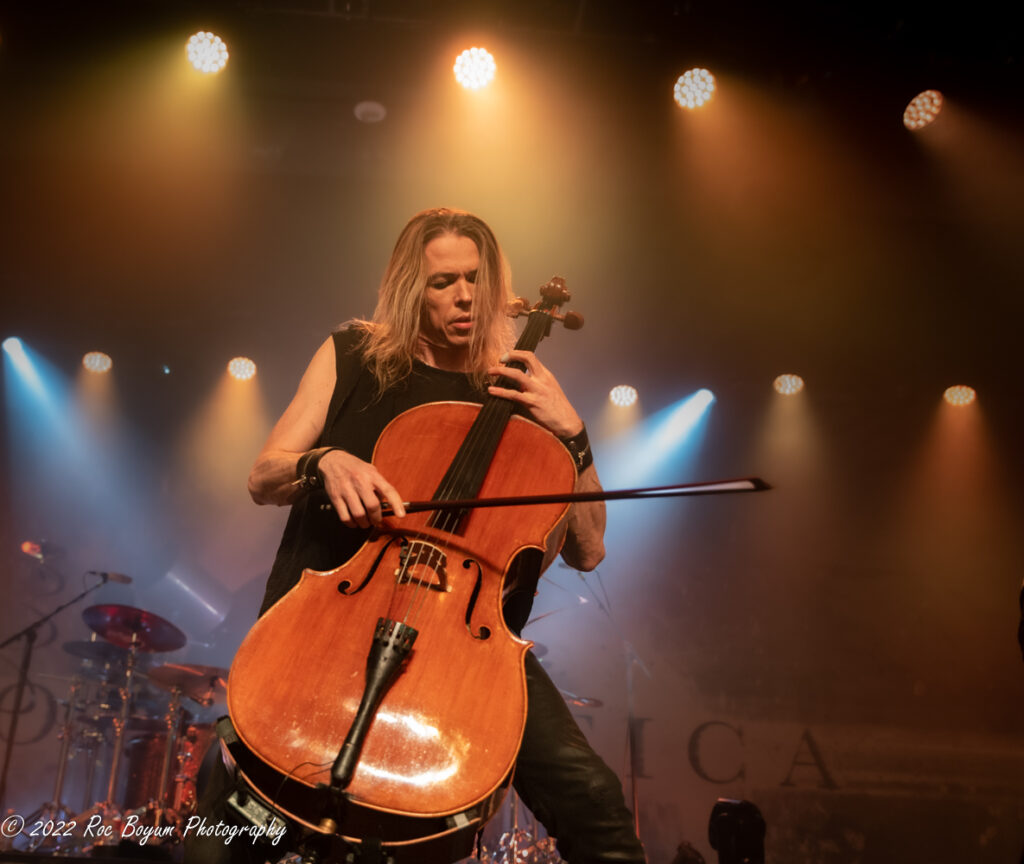 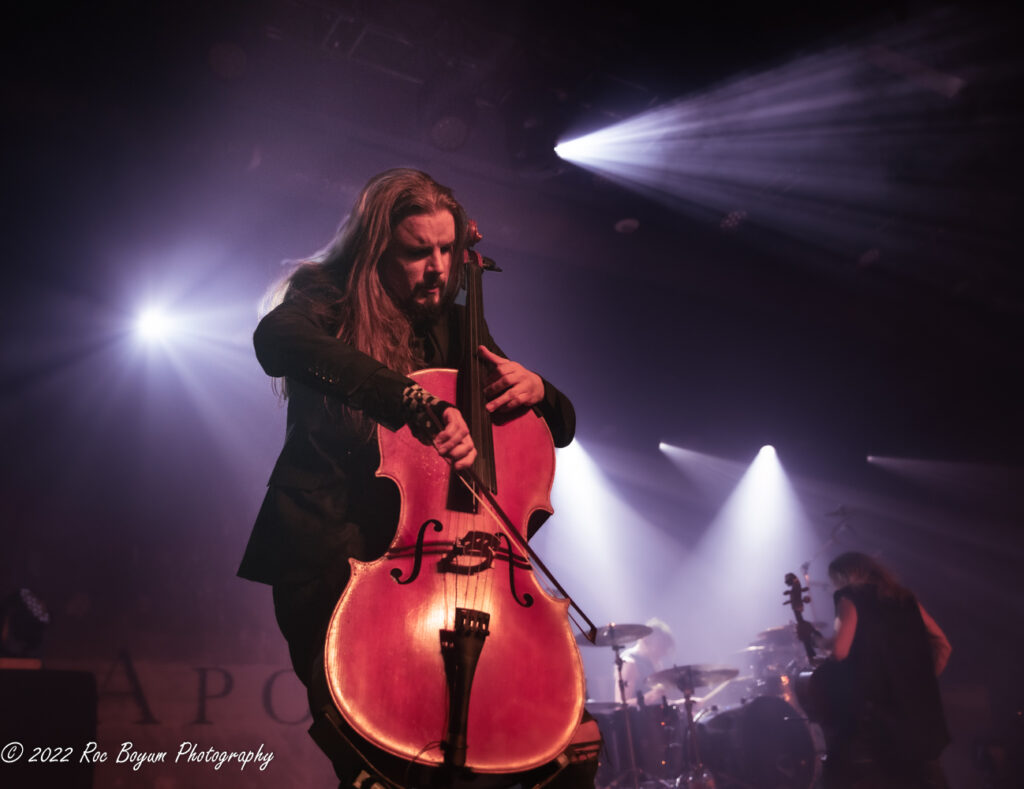 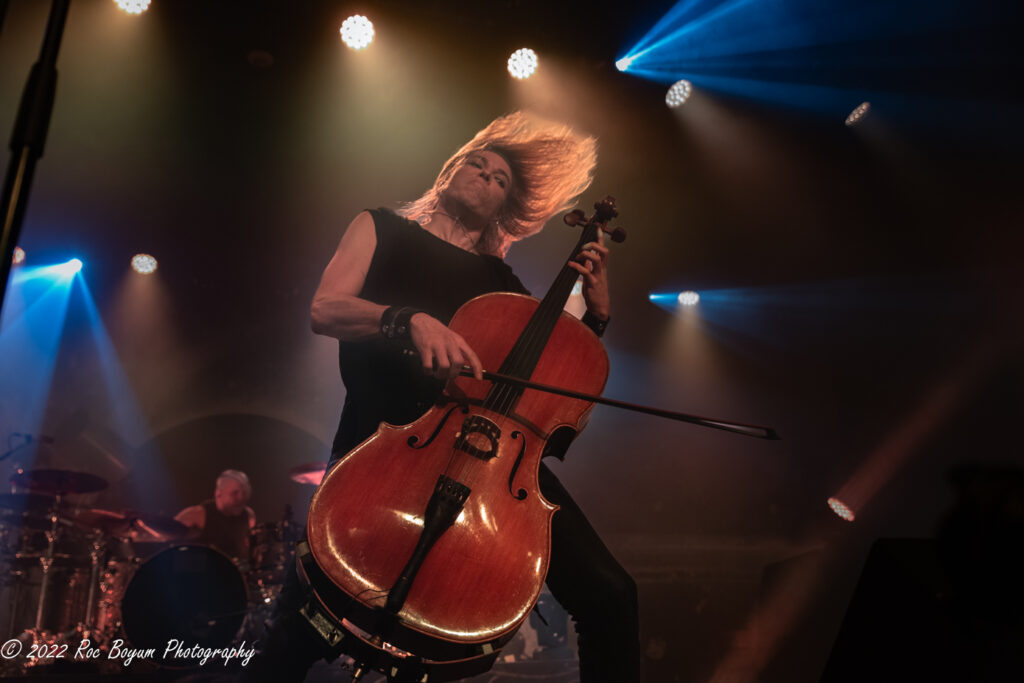 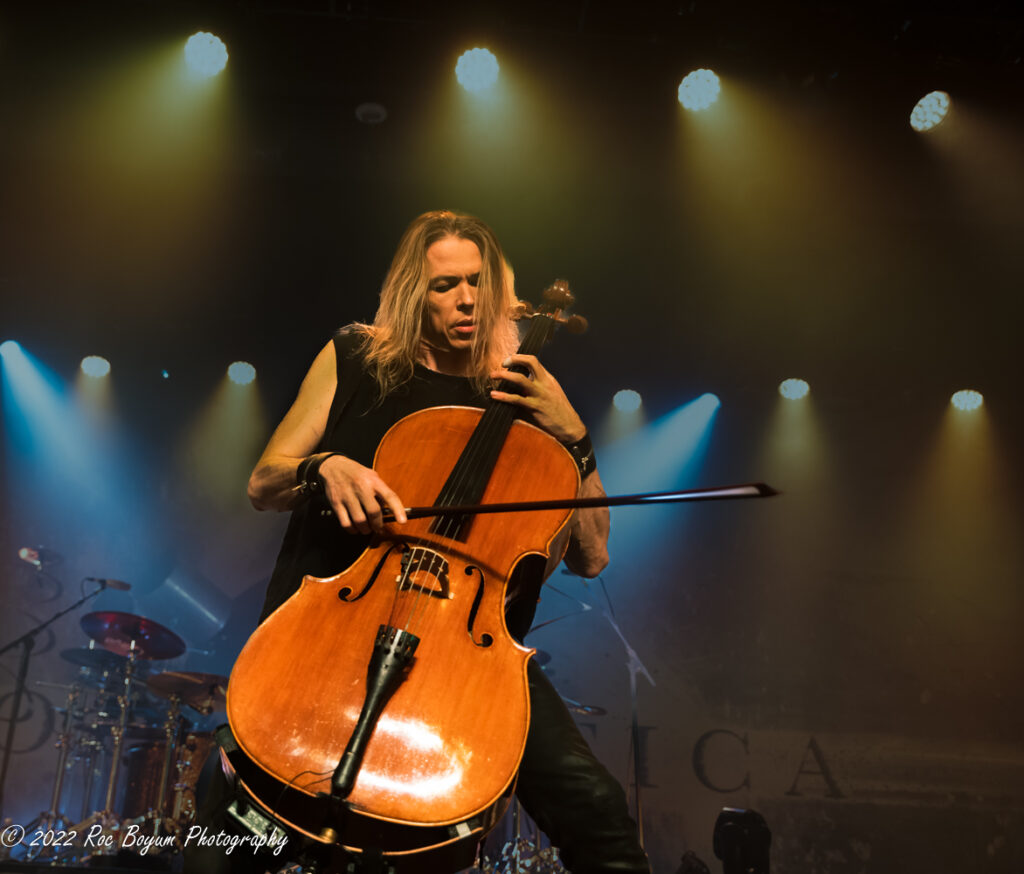 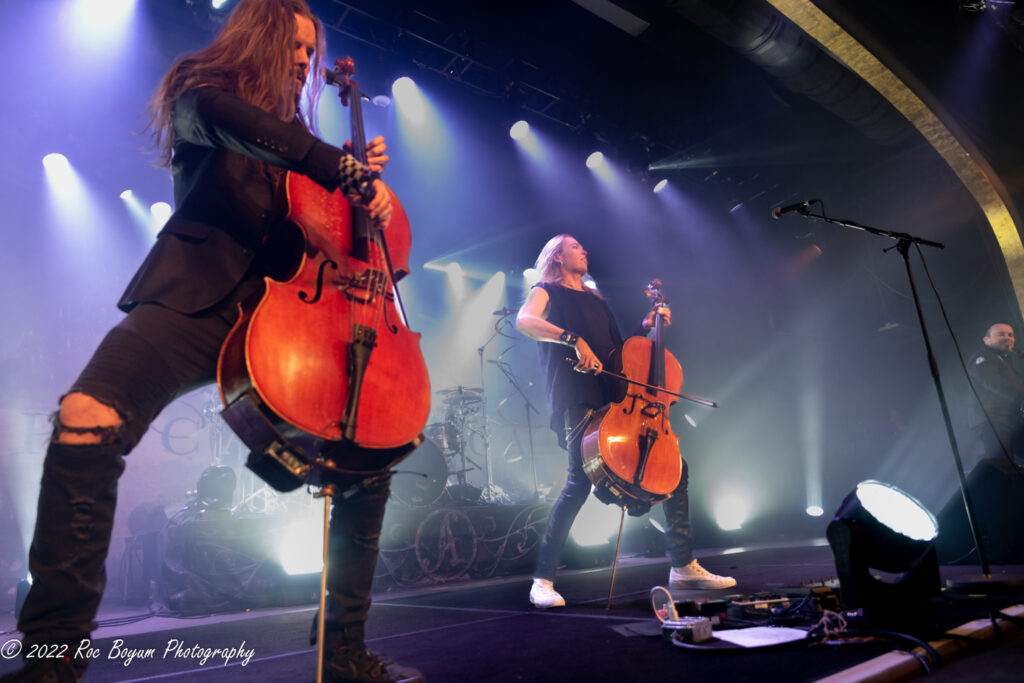 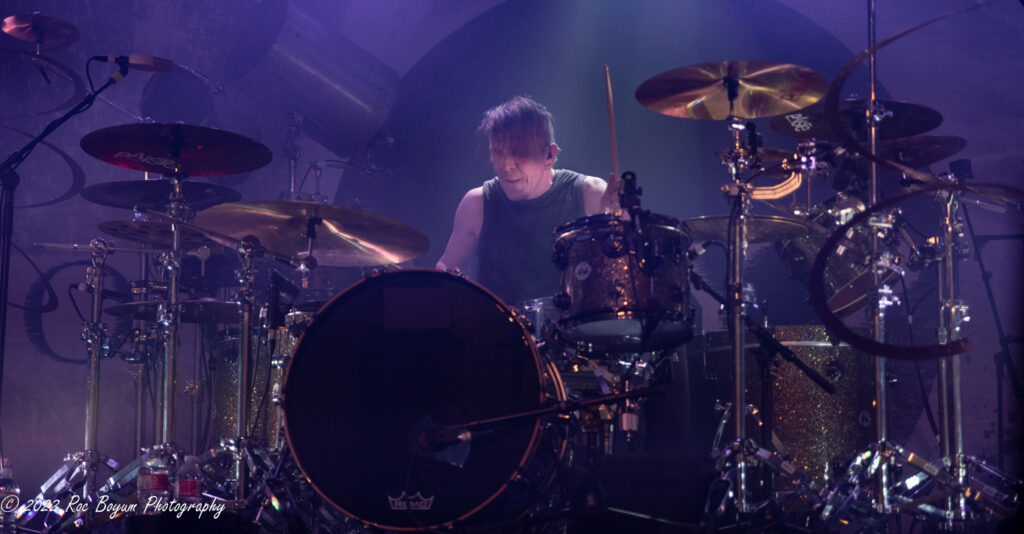 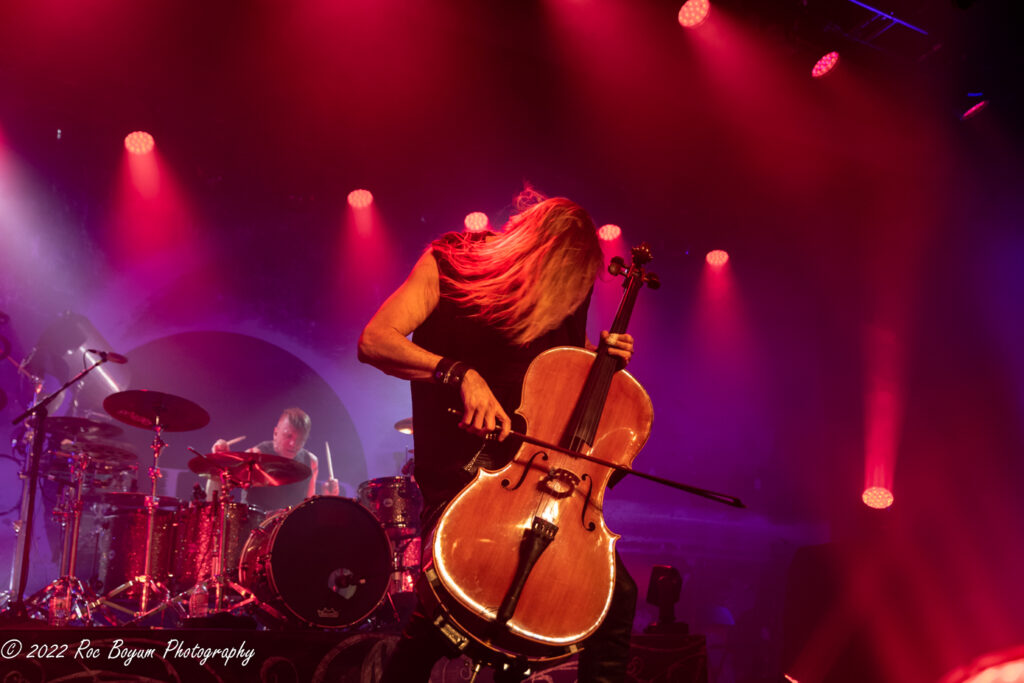 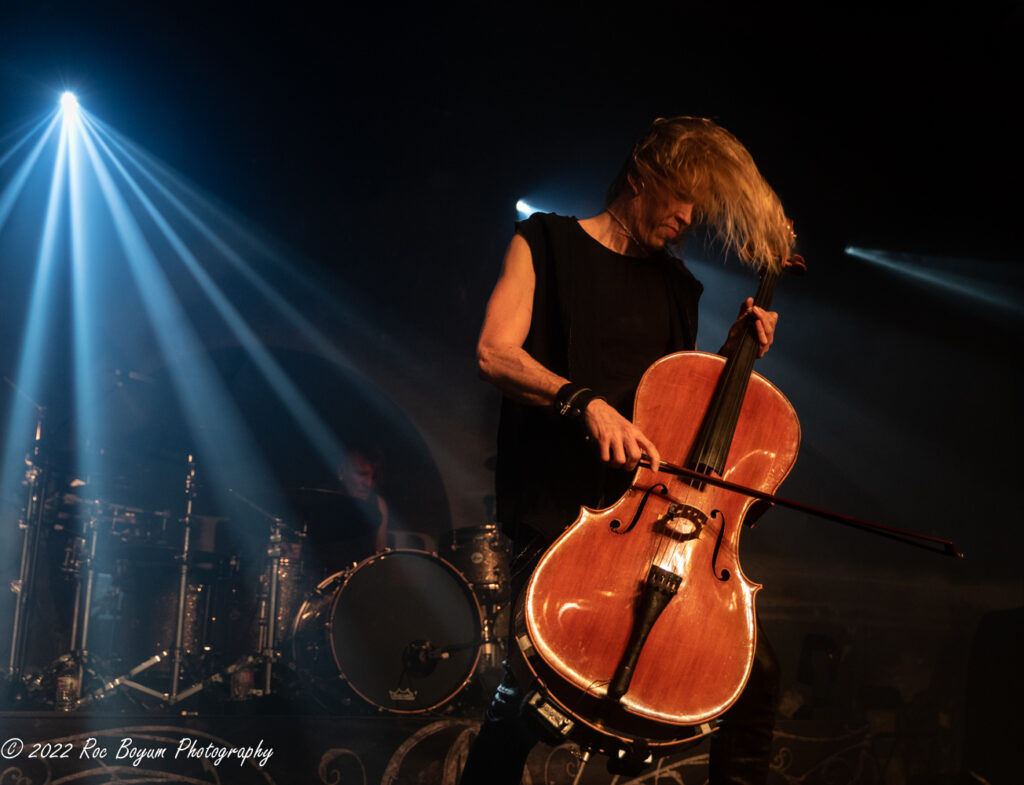 Ashes of the Modern World

I’m Not Jesus (with Franky Perez)

Nothing Strong Enough (with Franky Perez)

scream For The Silent

I’ll Get Through it (with Franky Perez)

I Don’t Care (with Franky Perez)

Nothing Else Matters (Matellica Cover)

In the Hall of the Mountain King (Edvard Grieg cover)