BRKN LOVE Rips It Up At The Marquee Theater Tempe Arizona

BRKN LOVE Rips It Up At The Marquee Theater Tempe Arizona

On Sunday July 25, 2021, BRKN LOVE hit the stage at the Marquee Theater in Tempe, Arizona, to an energized and crazy crowd; a sure sign that LIVE Music was back!  They opened the night for the headlining band Pop Evil and are currently scheduled to continue touring through December 11th 2021; not all shows are with Pop Evil.

BRKN LOVE is the brainchild of Justin Benlolo who is also the band’s, songwriter, guitarist and perhaps one of the best new rock vocalists to hit the stage in a long time! Benlolo, who is the band’s main songwriter, has drawn his influences from a plethora of many great bands, past and present.  Inspired by such musical greats as Soundgarden, Foo Fighters, Queens of the Stoneage, Led Zeppelin, and Black Sabbath to name a few; Benlolo has managed to craft songs that encompass the essence of the past fifty years of Rock music, while maintaining a unique sense of originality.

Fans of this band were lucky this night as BRKN LOVE played longer than they were scheduled to play, due to technical glitches that were beyond their control and they kept the crowd fired up and the party going. 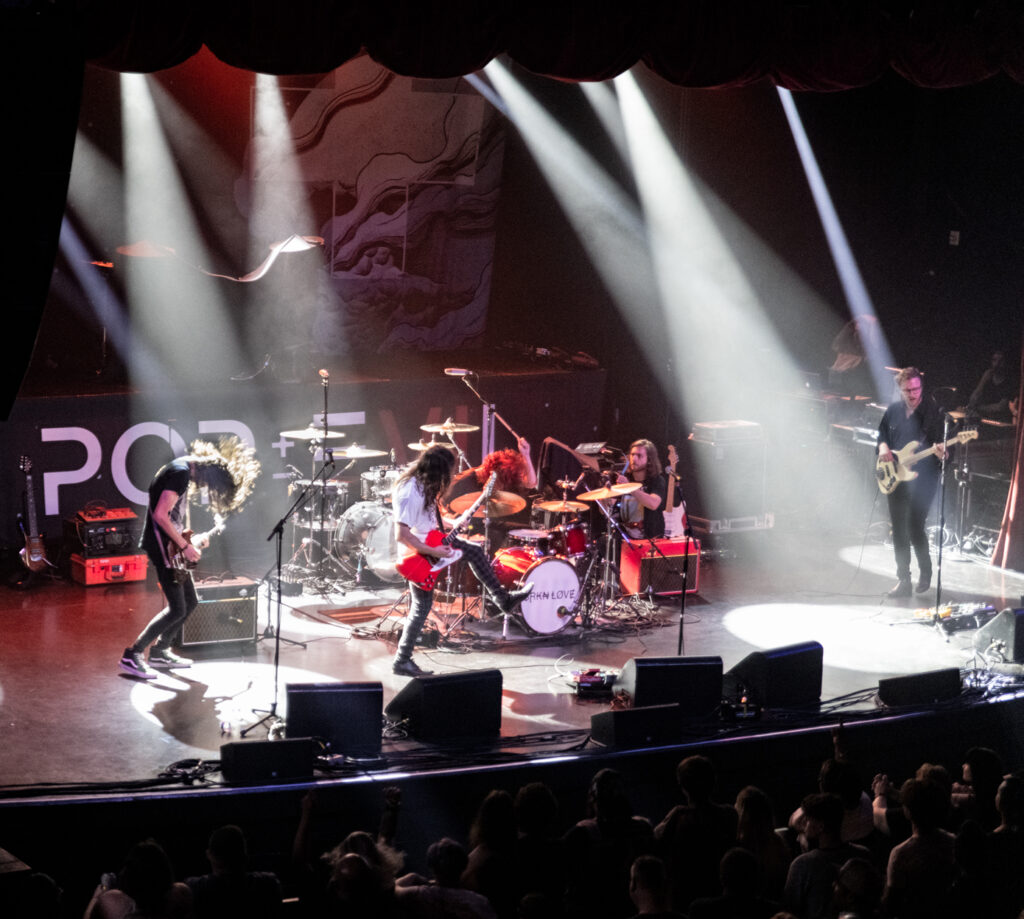 The band’s self-titled LP on Spinefarm Records was released on February 14, 2020 and was recorded live to tape; almost unheard-of these days!  Live to tape means exactly that; The band didn’t do multiple takes of each song and then splice them together to create that “perfect” take.

For this Marquee crowd, what you hear on record is what you get at a BRKN LOVE live show; so, it’s no surprise that the these guys kicked some serious ass live.  Benlolo’s vocals, are so good – that they are as good, if not better LIVE than on disc, and the band’s sound explodes on stage with a raw power, that is very difficult to find in a live show anymore.

BRKN LOVE played a powerful set with Benlolo engaging the audience throughout their show.  Their set also included a great cover of Black Sabbath’s War Pigs, which is of course a fan favorite and was a way to connect with those in the audience who might not be familiar with the band’s original material.

Another stand out moment of the night was during the Pop Evil set when Benlolo joined Pop Evil on stage for a cover of the Metallica classic, For Whom The Bell Tolls. Benlolo took center stage and gave this Metallica classic the blistering vocals you always wanted to hear in this song. With heavy guitars and blazing vocals, Benlolo and the Pop Evil band crushed the stage with the heaviest song of the night.

Keep your eyes on these guys! Grab their disc, check them out live, and if you can, catch them at one of the shows on this tour that they are headlining.

We have no doubt that this band will not be an opening act for very much longer. So, if you’re a fan of big chords, heavy melodic riffs and blistering vocals; get on board and join these guys for an interstellar ride into the future of R&R.

Check out the video for Shot Down below;

Check out BRKN LOVE are on tour with Pop Evil in 2021.