Hometown heroes Color Of Chaos made their long awaited return to a ravenous Marquee Theater Crowd on Saturday, December 10, 2022 in Tempe as direct support for 80’s rockers, LA Guns. COC could have easily been the headline act as these guys have a great following in the Phoenix metro area and the surrounding cities in Arizona – the energized Marquee theater was packed with their fans. Every band should get their chance at the big time and when these guys get on with the right promoter, they will be on an endless cycle of International touring and recording, and we predict they will quite possibly become a houshold name; they’re really that good! So, what sets these guys apart from their contemporaries you ask? They have brilliant musicians, but so does almost every other band out today and they have insanely incredible vocals, which is definitely a lot harder to come by these days! Their shows are off the charts with high energy that includes all the rockstar swagger (which is just inherent in their DNA and not just an act), creating the larger than life aura of their live shows. These guys are the REAL deal – So what do they have that other bands lack? GREAT SONGS!!! COC rises above other bands in their genre with songs that are extremely well written, with well crafted melodies and vocal lines, great musical intros, outros and extreme musical hooks and lines creating hard rockin’ – radio friendly songs which could make COC the next big thing! We still can’t believe that they’re not on a regular rotation with stations like 98 KUPD in Phoenix. But we predict a regular rotation is on the horizon for COC in 2023 – Heads up 98KUPD, be sure to be part of the COC invasion and get these guys on your rotation and your audience will not only thank you but you’ll be gaining a greater fan base in the process.

COC commands the venue and rocks every stage they play and tonight was no exception with a brilliant set of six songs that had everyone in the venue rockin’ hard. COC is a band of seasoned veterans who know that it’s the fans that keep any and every band alive, and so, before they played a single note, they came out throwing T-Shirts and guitar picks to the audience as a way of saying thanks to their fans for their support. In fact, throughout the night, drummer Danny Ott and singer Steve Carlson thanked the audience for coming out and supporting live music; now that’s a band of real people making real connections.

Opening their set with their, take no prisoners approach, the band hit The Marquee Theater audience hard with the heavy grind rocker “Hollywood ” from their full length LP, of the same name. This is a song that musically grabbed the audience by the throat and beckoned those who were in the back to start pressing forward to get a closer look at who and what was kicking out this killer sound that was coming off the stage.

The band continued with “Crucified” which starts off with guitarist Steve Favela churning out some great riff rock guitar lines who is soon joined by drummer Danny Ott and bassist Lance Eric for a groove that’s so heavy; it’s like a ton of bricks just came crashing down on you; FN brilliant. Singer Steve Carlson’s vocals on this track go from incredible wailing highs to grinding gravel in one fell swoop all the while he’s playing rhythm guitar; Rock and Roll perfection – how cool is that? FN damn cool for sure!

“Simple Times” is one of those anthem style tracks off their debut LP that had the entire venue singing along. From your first listen of “Simple Times” it sounds like a song that’s so familiar, like it was always your favorite song – yet something you haven’t heard before which is really quite hard to do – but these guys have got that magic vibe down and all the while making you feel great!

COC are known for their hard driving rockers like their next song, “Eva Destruction” which is yet to be officially released and one of the stand out songs of the night. This song is meant for the big stage with it’s screaming guitar riffs, over the top vocals, bass and drums that charge forward with a releantless furry and some sweet backups by bassist Lance Eric. Guitarist Steve Favela unleashes a solo with with a tornedic furry that leaves not one guitar fret untouched. Out of Favela’s solo, Carlson starts a chant of “Hey, Hey Hey“, that has the audience right there with him like one huge massive choir; brilliant!

The last song of the of their set, “Cynical” is a stellar rocker that is definitely a fan favorite and so far has only been released as a video. Live, the song starts off with drummer Danny Ott pounding out a four on the floor bass drum
groove that gives singer Carlson the opportunity to stir up some audience participation by asking everyone from the front of the venue all the way to the back to join in by raising their hands and clapping to the pounding bass drum rhythm. 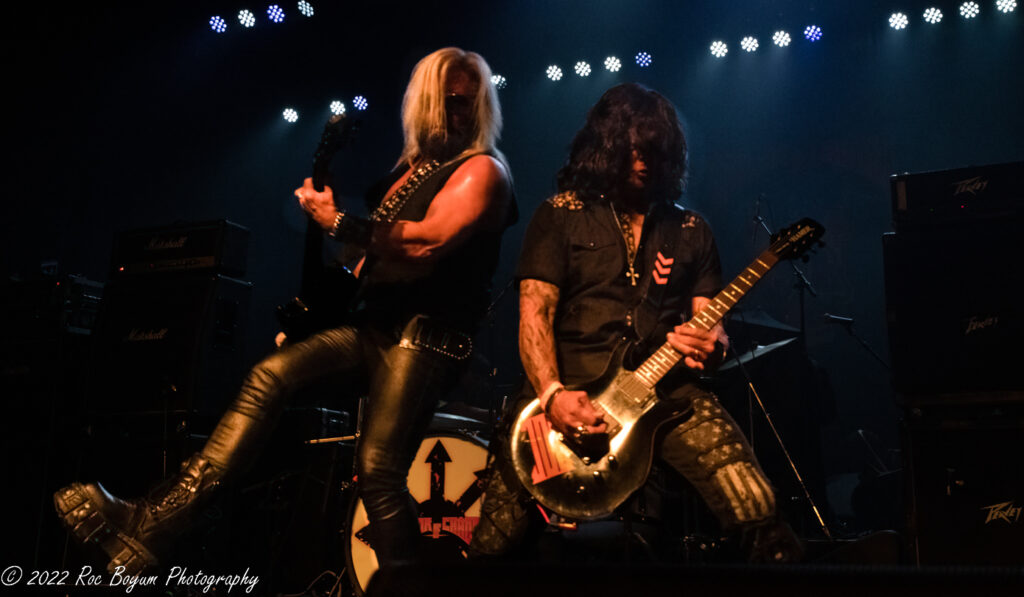 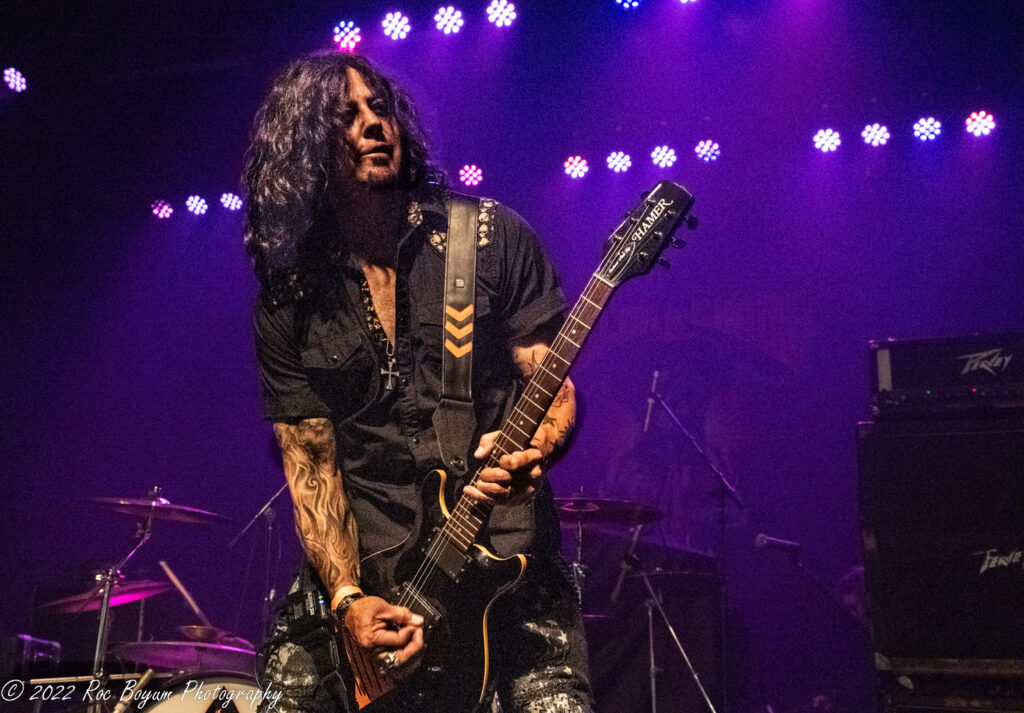 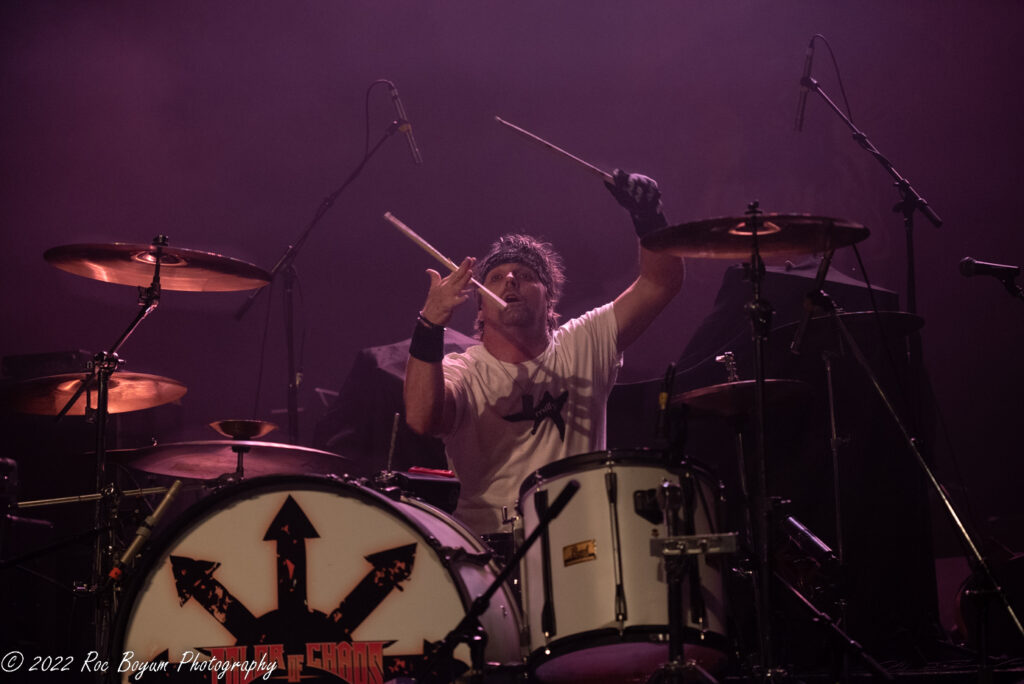 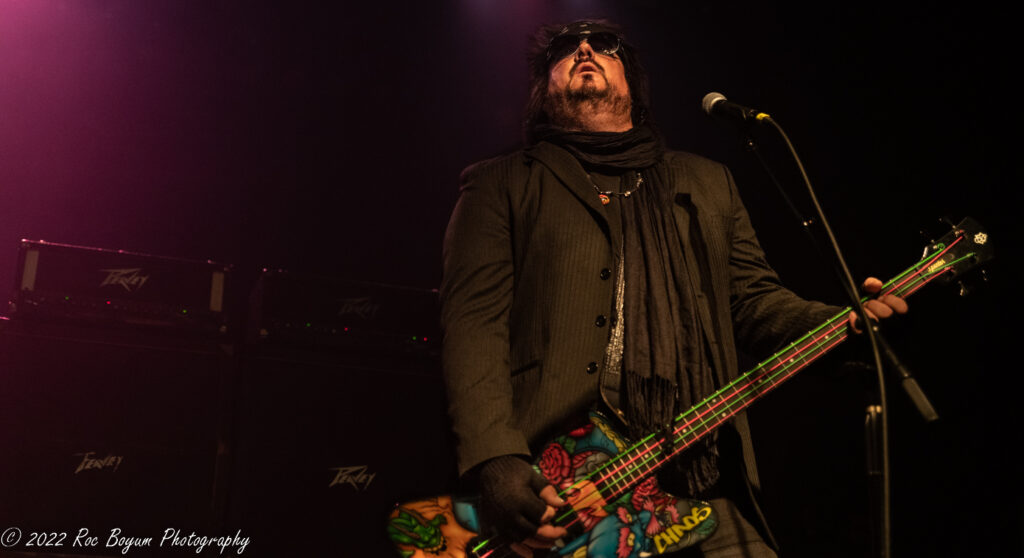 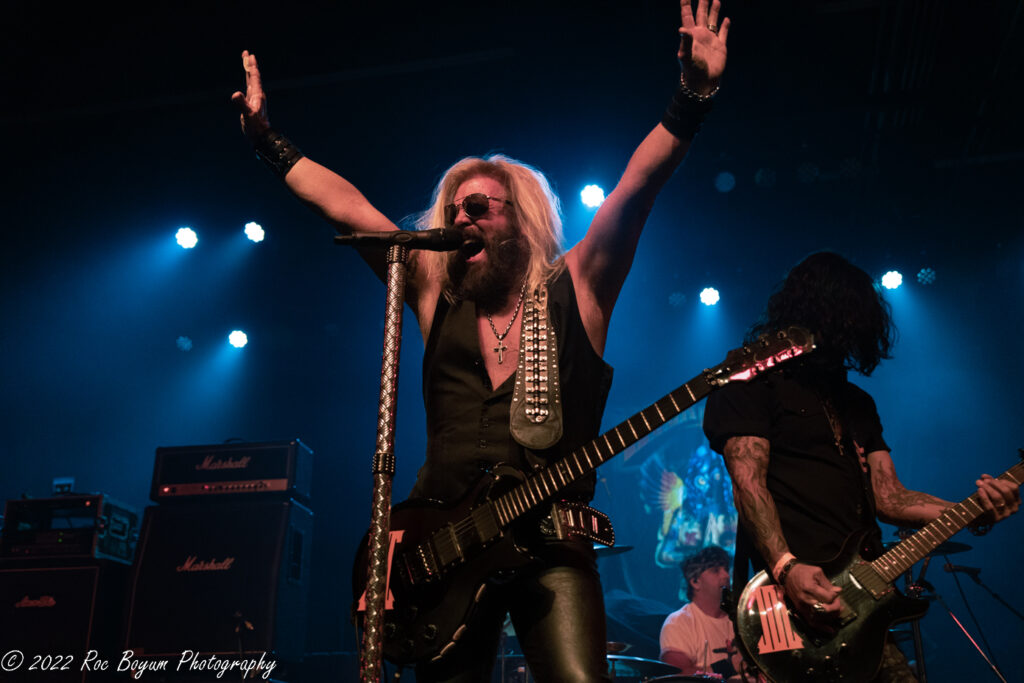 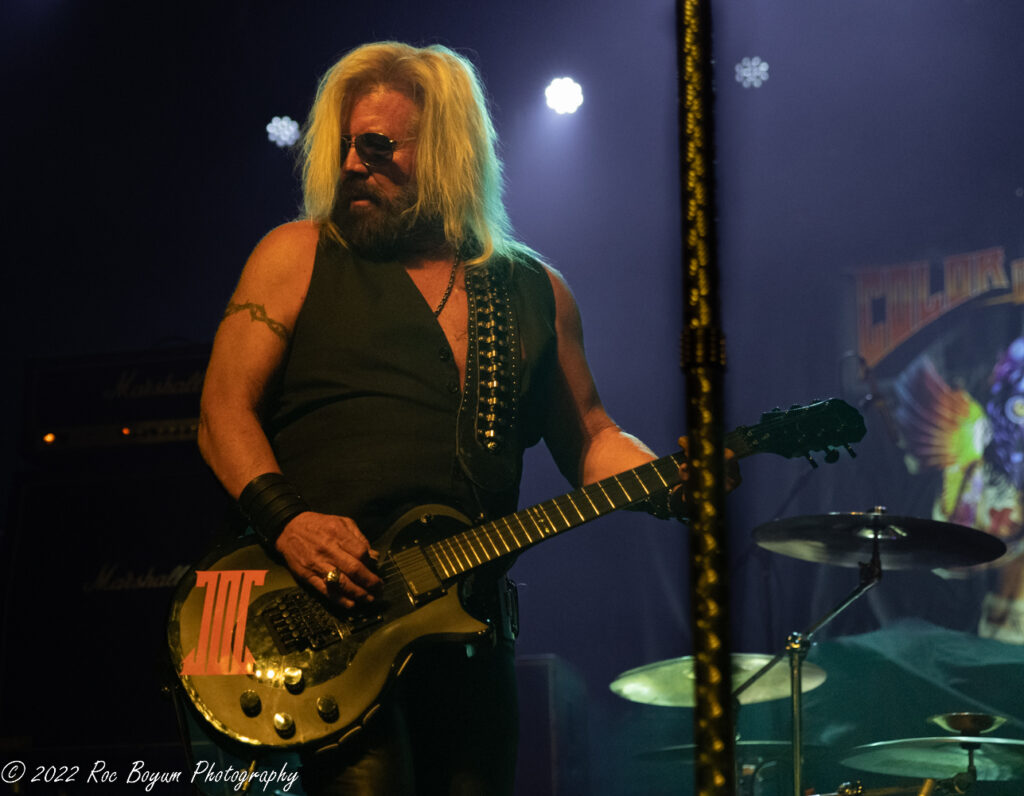 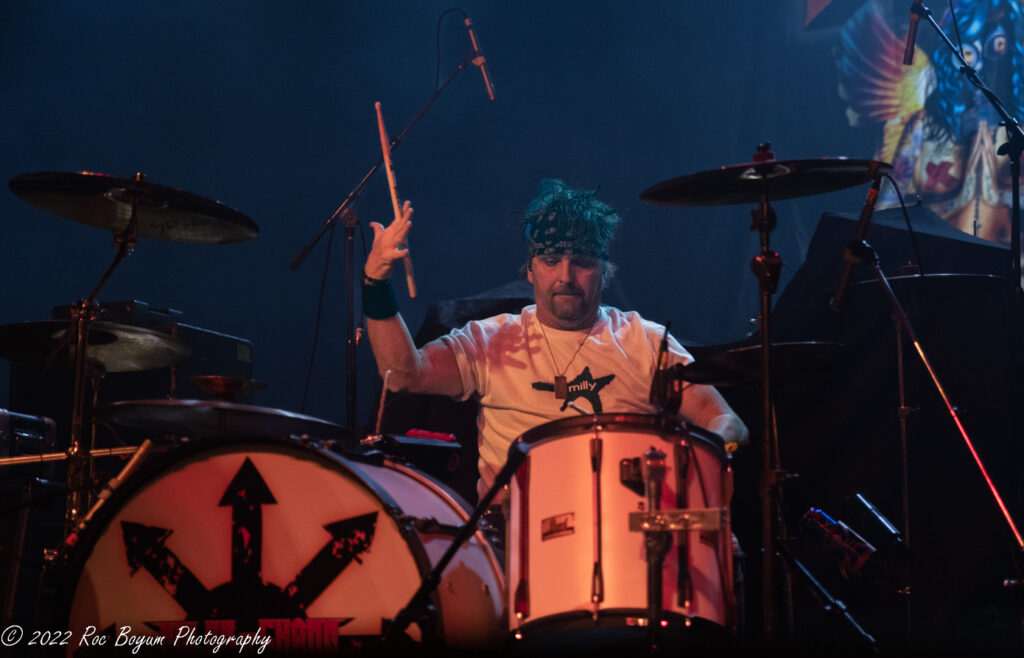 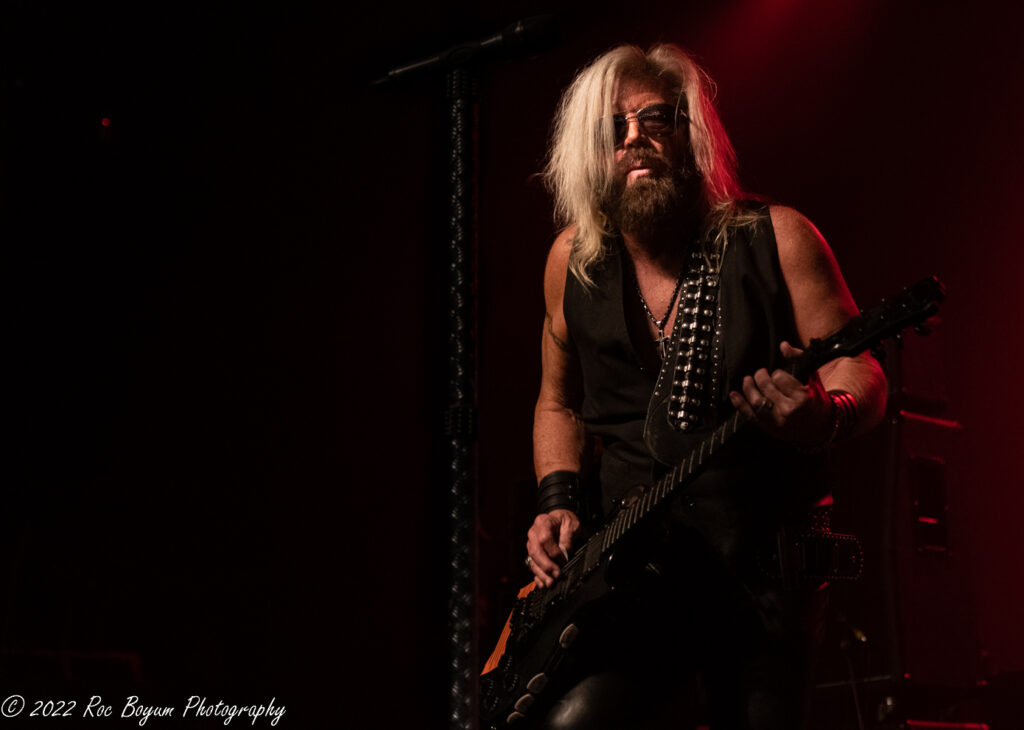 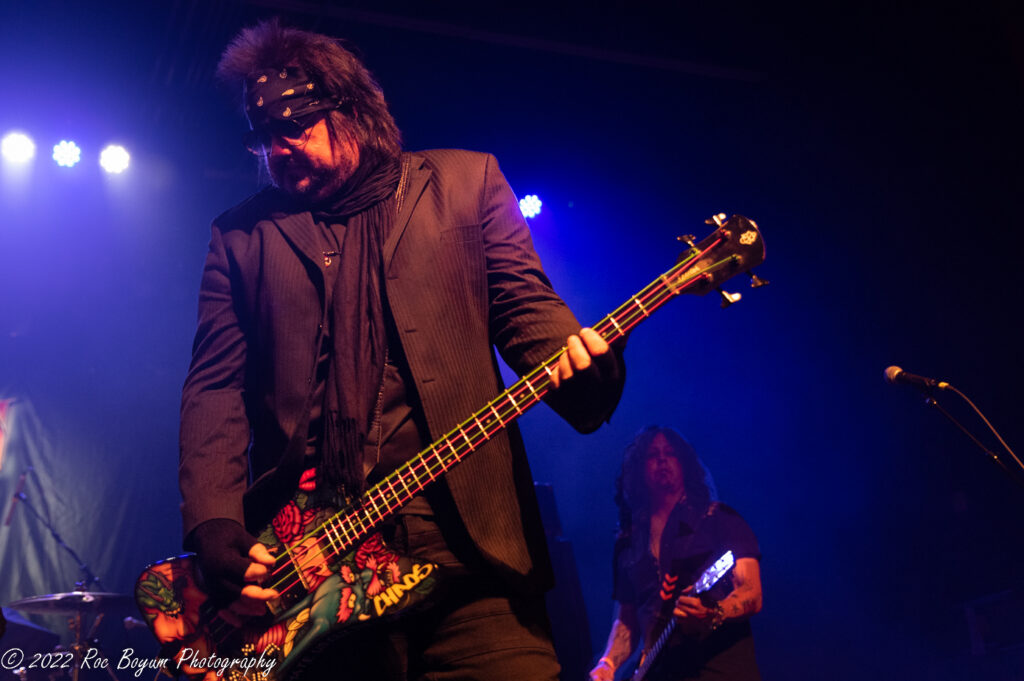 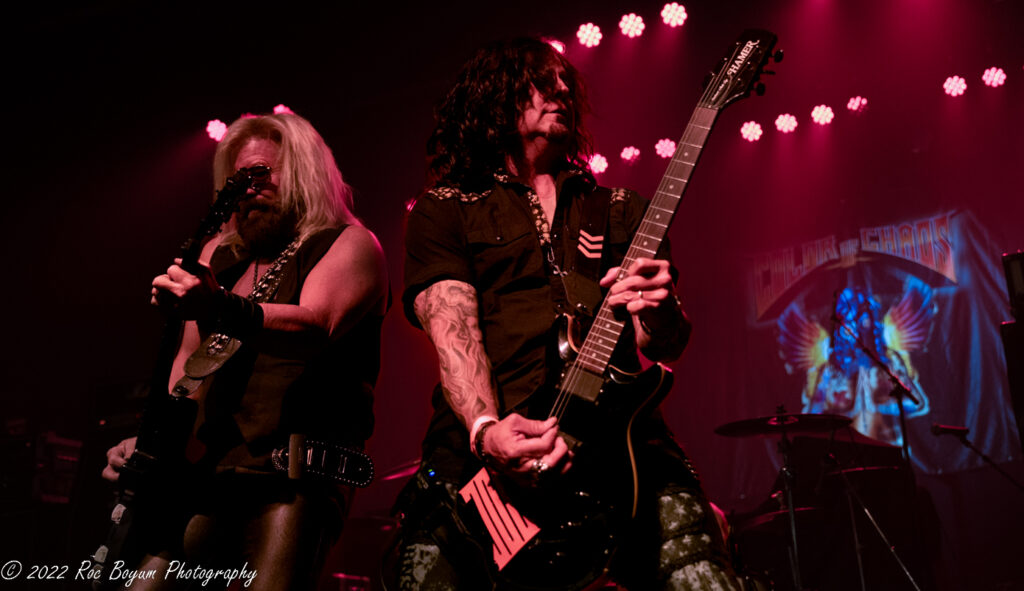 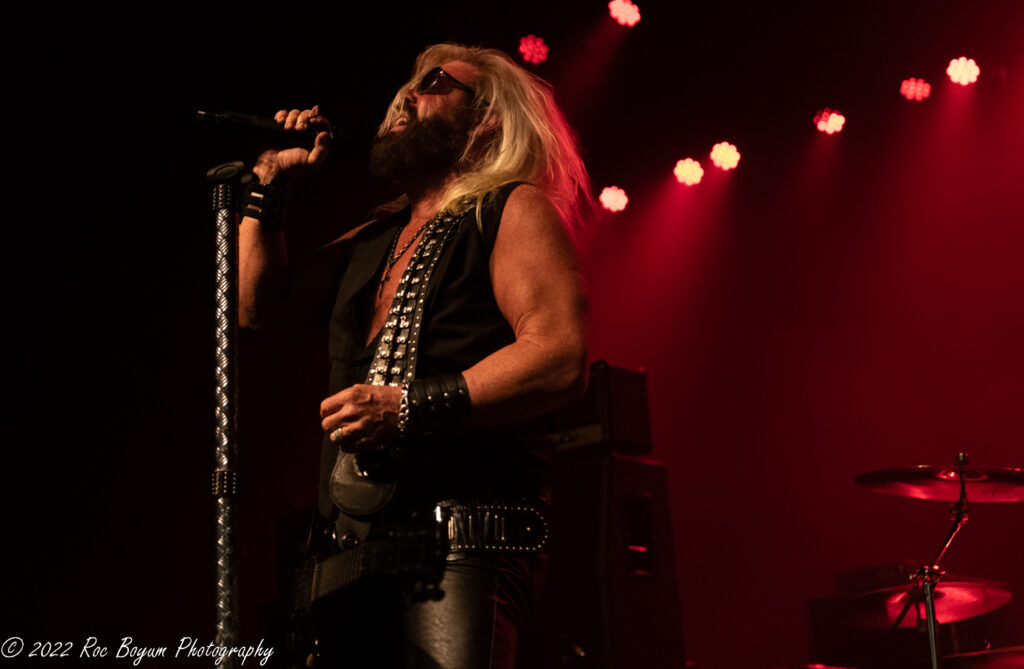 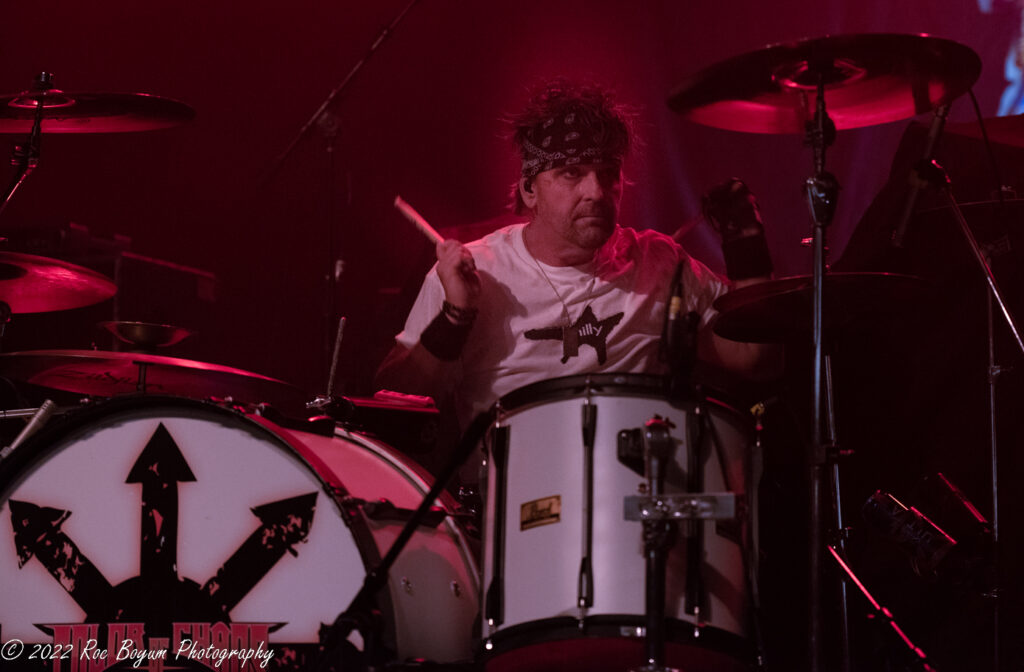 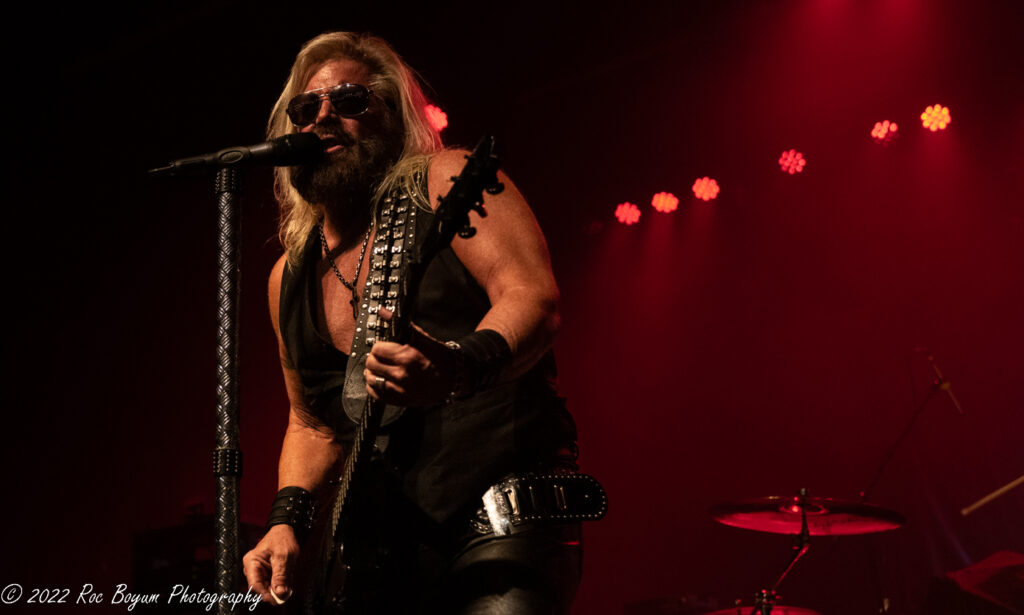 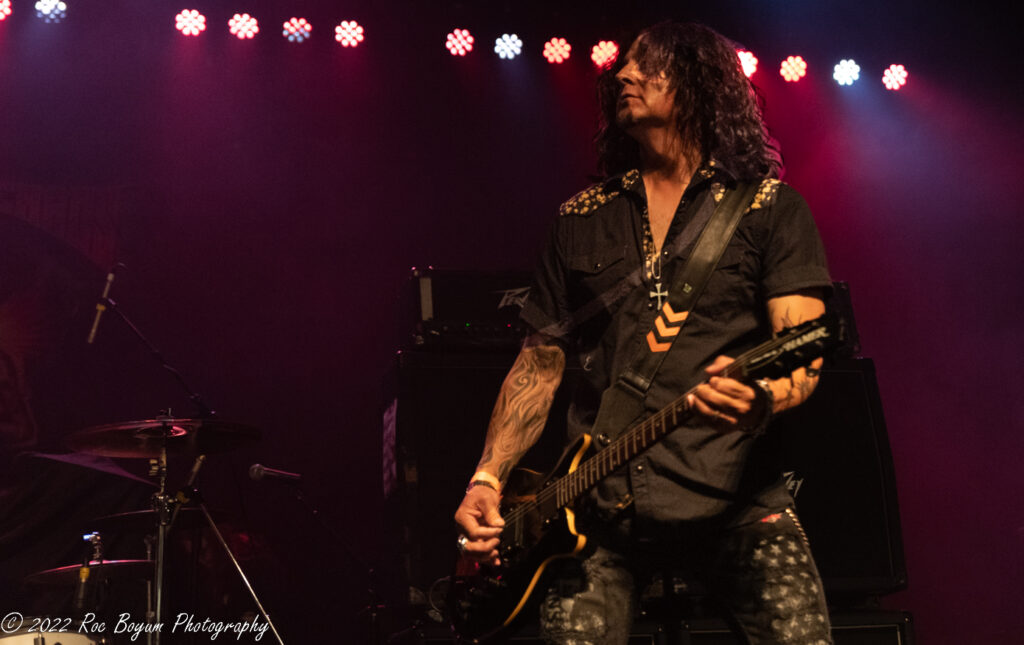 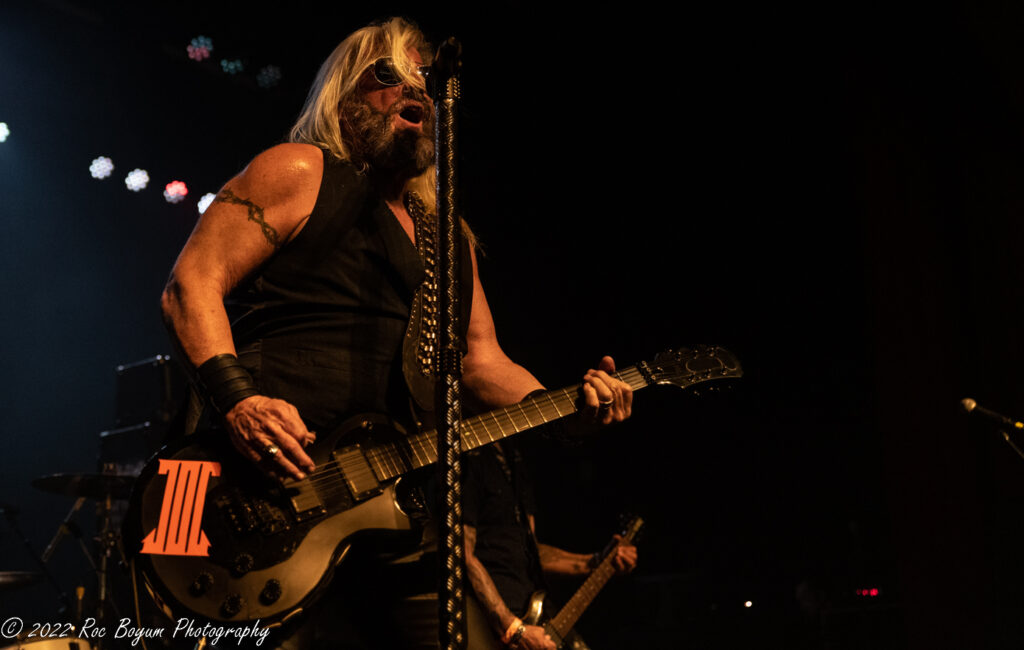 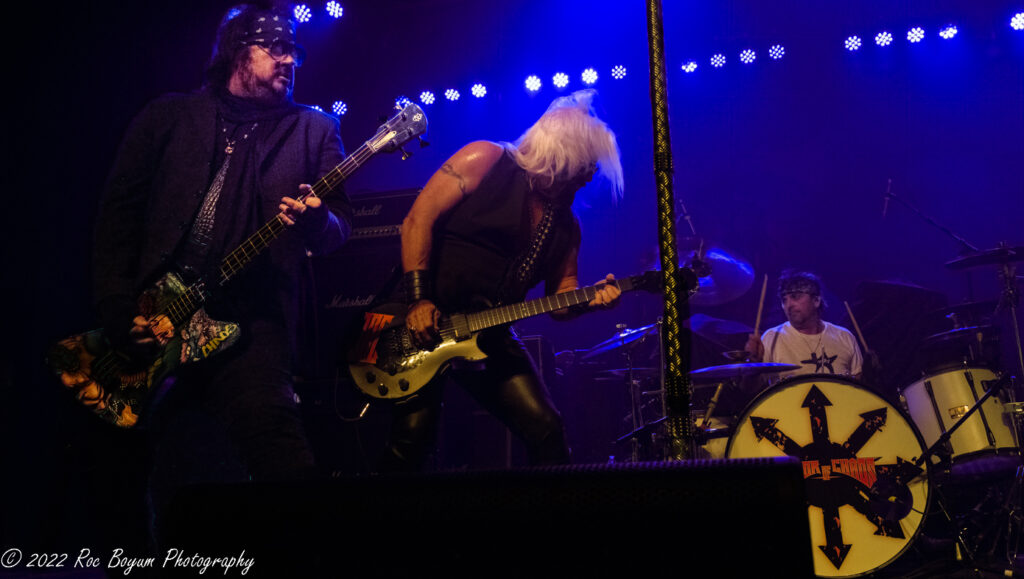 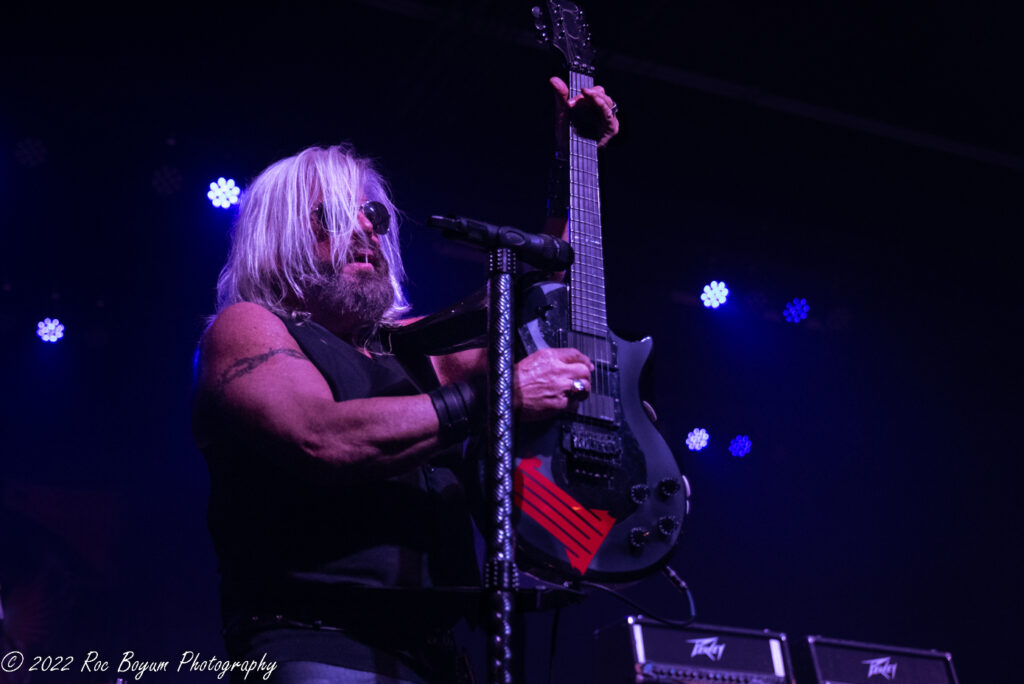