Disturbed descended upon Los Angeles with a sold-out show on January 11, 2019 at the Los Angeles Forum. The band hit the ground running with the collective intensity of a band that had been on the road for 2 months or longer, but this was only their third show; if you include their mini set on Jimmy Kimmel Live 1/10/19.

Disturbed presented a strong 17 song set to an insanely appreciative and enthusiastic crowd. The band culled the material for this tour from their entire studio catalogue with a couple of select and renowned cover songs like their version of the Genesis song Land of Confusion. Disturbed also presented their remake of the Simon and Garfunkel classic, The Sounds of Silence. Disturbed’s live performance of this classic song on Conan Live, March 28 2016 impressed writer Paul Simon enough to reach out to the band via email with these words:

“Really powerful performance on Conan the other day. First time I’d seen you do it live. Nice. Thanks.”

Draiman responded, “Mr. Simon, I am honored beyond words. We only hoped to pay homage and honor to the brilliance of one of the greatest songwriters of all time. Your compliment means the world to me/ us and we are eternally grateful.”

In addition to reaching to the band privately, Simon signed off on a post through his own social media accounts, directing fans to footage of the Conan performance calling it a “wonderful rendition.” Check out their dynamically bone chinning tribute below!

The band’s highly anticipated 2019 “Evolution” tour, is a world tour on a GRAND scale with amazing pyrotechnics, an incredible diamond shaped stage that extends out into the GA floor, a smaller “unplugged” stage that was situated between the main stage and the sound board. Disturbed also had a back screen that’s as large as they could fit into the LA Forum, which made for great viewing; even for those in nose bleed seats.

The band opened the show to a feverishly receptive audience with brilliant versions of Are You Ready, Prayer and The Vengeful One from their LP’S; Evolution, Believe and Immortalize respectively.

Throughout the night, the entire LA crowd was so relentless with their roaring appreciation for the band, that at one point lead singer, David Draiman was prompted to make this comment to the Los Angeles crowd;

“Maybe it’s just gotten better over the years but Holy Shit, you are just kicking my ass tonight”

The band continued with The Animal from their Asylum LP and a double punch from their debut LP “The Sickness” with Stupify, that was followed by an impassioned and impressive guitar solo from guitar heavy weight Dan Donegan, before the band dove into a slamming version of Voices; a song with a signature sound that exemplifies the band’s early roots. Next was the Genesis cover, Land of confusion, a track that many, including David Draiman, would say is out of character for Disturbed. Disturbed has the ability to take any song and make it something that is not only uniquely theirs but quite arguably better than the original; which is definitely the case with both, their studio and live versions of this iconic track.

Hold on to Memories was another track from their latest Evolution LP that was followed by entertaining solos from bassist John Moyer and drummer Mike Wengren respectively. 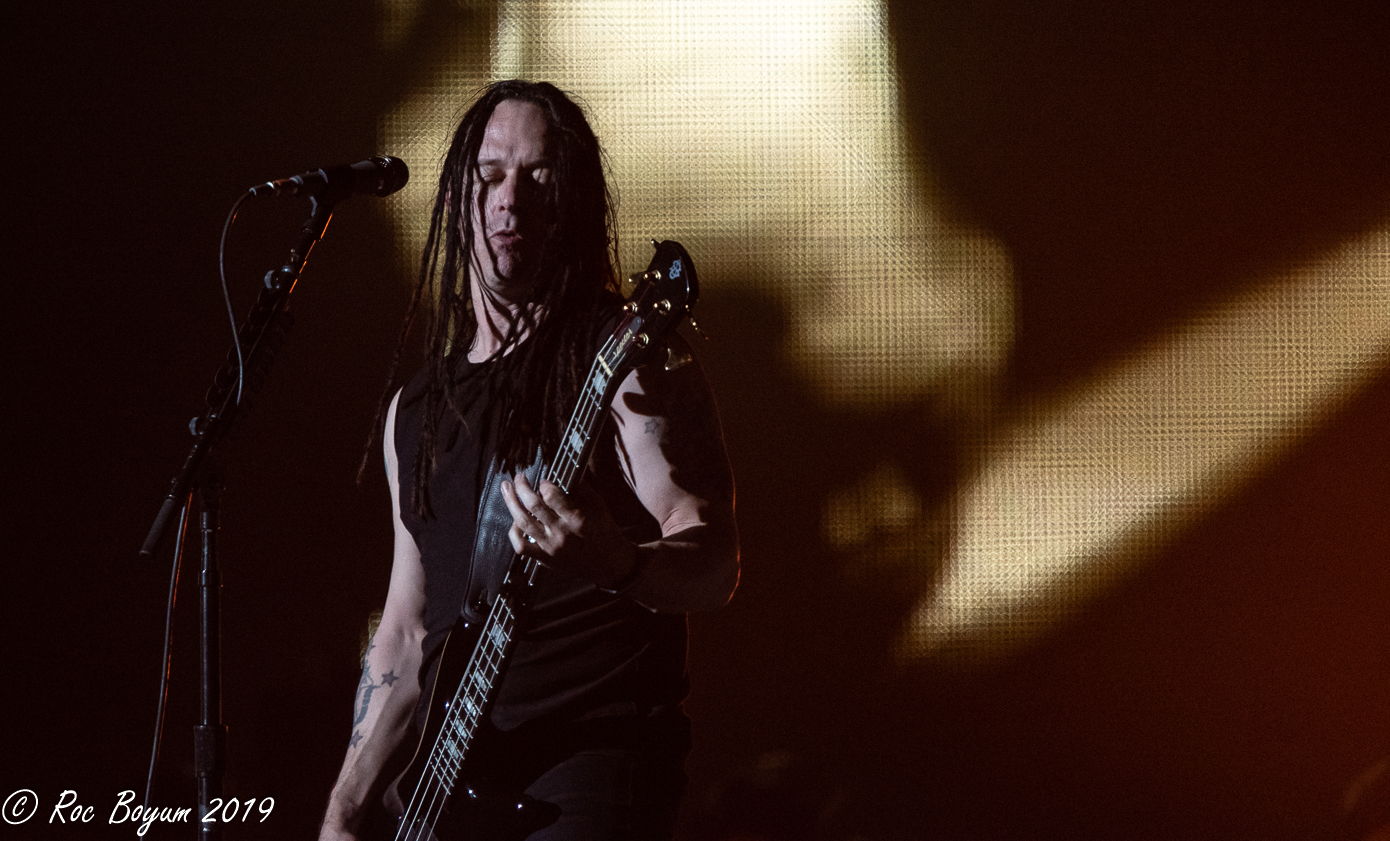 The Game, from their The Sickness LP followed, which highlighted possibly the loudest audience participation of the night. The song has an amazing chanting style chorus that was fueled by Draiman as he came off the main stage and onto the GA Floor to ignite and charge up the audience; creating what was quite literally, an incredible in-your-face sing along.

The next two songs were from their latest Evolution LP with, Reason to Fight and Watch You Burn, that were both delivered from the smaller “unplugged” stage. This not only imparted a more intimate atmosphere but gave those that were seated further away from the main stage an instant front row position.

Both, Reason to Fight and Watch You Burn are songs that are personal to the band. Reason to Fight addresses the sad realities of substance abuse, while Watch You Burn gives us an inside look into artist abuse by the music industry. An excerpt from David Draiman’s Evolution track by track guide in a recent Metal Hammer article, says it all!

“They’re very quick to use you up and throw you away.”

Draiman prefaced their “unplugged” set with a message on suicide prevention with these words;

“Take an active role to help those that you know are struggling with these demons. Don’t wait until you’re standing in front of a casket to feel sorry that you didn’t do something sooner. Smack them in the face, wake them up, I don’t care what you have to do,  because if you love them you should let them know, you’ll do what it takes to help them stay alive.”

For the next song, Disturbed brought forth a chilling version of their highly acclaimed remake of the 60’s classic, “The Sounds of Silence” originally sung by Simon and Garfunkel. The song was delivered from the main stage in a similar unplugged fashion as the previous two songs, only with some special instrument augmentation. Guitarist Donegan was on keyboards, drummer Wengren was on tympani and there were two additional musicians that were playing string instruments.  This instrumentation, while not as large as on Conan Live, consummated their embellished arrangement which in fact exalted the dynamic vocal range Draiman bestowed upon this classic song; sheer brilliance!!! The band finished their main set with two songs from their Indestructible LP-Indestructible and Inside the Fire. For the song “Inside the Fire”, Disturbed offered up some of the most spellbinding and ingenious pyrotechnics that we have witnessed to date, while simultaneously setting the bar for the future of concert pyrotechnics. They had several flash pots on either side of the stage that had ribbons poised above them. When a flash fire was set off, the fire from the pots ignited the above ribbons into long columns of fire that went up the ribbons from flash pots to their ends up to the catwalk; it was quite impressive and undoubtedly a tough prospect to get this pyrotechnic concept passed by the fire marshal!

Disturbed came back for a three song encore that included “The Light” where Draiman said; “This is usually where we ask for a little audience participation.”  Draiman then asked one individual on the GA Floor named “Daniel”  if he would like to come up and join the band. Since they couldn’t get the barricade open to let “Daniel” through, Draiman asked the audience to part the sea to allow “Daniel” to come around to the back of the stage.  The audience participated by chanting; let him through, let him through, let him through. When Daniel appeared next, he was on the floor, next  to the stage-backstage. Draiman went down to the GA floor to talk to “Daniel” and told him, “This one’s for you”, when Draiman emerged back on stage; the entire LA Forum crowd was chanting “Daniel’s” name, which brought a huge smile to Draiman prompting him to say;

“That’s the beauty of this music – see – it makes you stronger than when you came in!”

He also asked the audience to light up their cell phones, during the song’s chorus for the words; “The Light”. The sight of 18,000 lit cell phones across the Los Angeles Forum will leave an afterimage that will not soon be forgotten.

Next, was a brilliant version of the song “No More” from their latest LP, Evolution, which the band premiered for the first time at this Los Angeles show.

During the song “No More” the band displayed the song’s lyrics up on the big screen behind them to further echo the song’s message about the War Machine Fear-Mongers whose wheels continue to turn over the bodies of the innocent. Disturbed finished out the night with a head pounding version of “Down With the Sickness” from their “The Sickness” LP; where it all began for this band.

Disturbed is an incredibly positive band with an equally positive message that makes you think about the world as a whole, humanity and where you are in life. They also remind us of how we can better serve others and a mindset that can help everyone to realize the gratification of their goals.

If we can all hold on to these values and pass them on to others, the world will definitely be a better place for all of us, here and now, and for future generations to come. Hold On to Memories

A Reason to Fight

The Sounds of Silence

Down With the Sickness