GHOST Sells Out The Los Angeles Forum With Their First Ever Headline Arena Show In The USA on November 16, 2018!

For those who like to have their Halloween all year long, and are in the mood for ghoulish and devilish fun, you don’t want to miss this show!  Los Angeles turned out in droves to the LA Forum to witness this phenomenon known as ‘Ghost.”

GHOST brought their amazing theatrical stage show to a sold out Los Angeles Forum crowd with nearly 18,000 fanatic GHOST fans in attendance. This tour is known as, “A Pale Tour Named Death” which also marks a real milestone for GHOST, with this LA Forum show being one of the only two Headline Arena shows for the first time ever here in the States. The first show at the LA Forum on November 16, 2018 and the other show takes place on December 15, 2018 at the Barclays Center in Brooklyn NY.

For this tour, GHOST brings to the stage a theatrical presence circa 1970’s with their elaborate stage set-up that is fashioned like the alter of a Romanesque Church, complete with a full sized backdrop, that looks like a stained glass window in a church (only with a Ghost touch). This tour also differs from previous GHOST tours in that they have brought with them a much larger band. All the music is played by “Nameless Ghouls” actual live musicians in contrast to previous shows using computers and recorded tracks.

To give the fans an incredibly memorable experience, GHOST provided no support acts, thus giving the fans a full night of GHOST, and for this show they gave the fans two full sets that were presented as Act 1 and Act 2, for a total of 26 songs  with only a brief 15 minute intermission between the Acts…Brilliant!!! 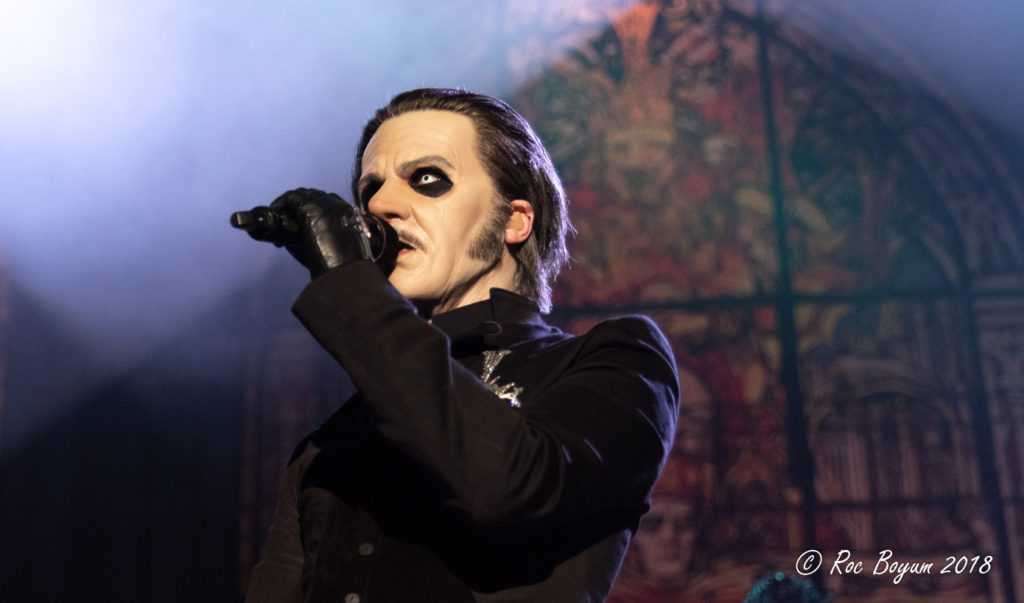 The show began with the venue completely darkened and the keyboard rumble of the first track “Ashes” from their latest Prequelle LP reverberating throughout the LA Forum, and the eerie chanting of children singing. With a simultaneous burst of light and sound the band kicked-in to the instrumental part to “Ashes” which gave way to a stage that was lit only enough, to silhouette the “Nameless Ghouls”. The band seamlessly dove into a thunderous version of “Rats” from Prequelle with the ring master himself, Tobias Forge aka Cardinal Copia bursting onto the stage, bathed in stunning white lights.

The Cardinal appeared on stage in his dashing attire as seen in the video for their hit song “Rats”. This elegant and debonair costume gives the Cardinal the ability to strut the stage effortlessly which was not as easily achieved in his previous Papa Emeritus character costumes. 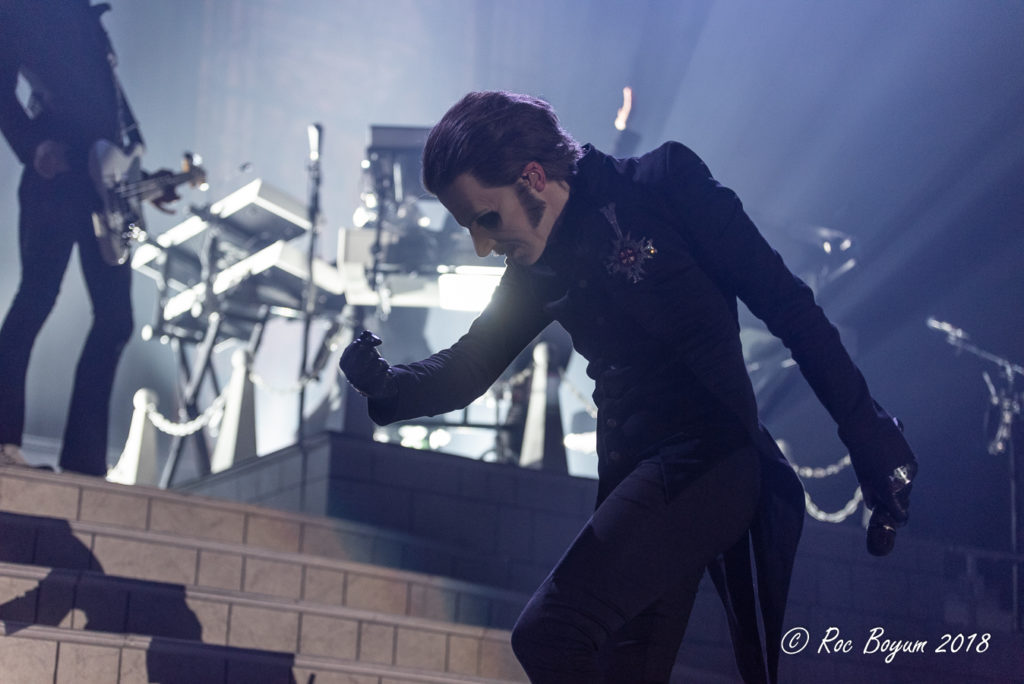 The band continued without hesitation, ripping through blistering versions of Absolution-(Meliora), Idolatrine-(Infestissumam), Ritual-(Opus Eponymous), Con Dlavi Con Dio-(Opus Eponymous), Per Aspera ad Inderi-(Infestissumam), Devil Church-(Meliora) before the two Nameless Ghoul guitarists squared off at either end of the stage for a dynamic and heavy guitar dual that lead into the beginning of Cirice-(Meliora). For the next song, Papa Nihil came out with his saxophone to join the band for a brilliant version of Miasma.

For the song Jigolo Har Megiddo, the Cardinal came out dressed in all white with his Tuxedo jacket with tails and addressed the audience in all his comedic grandeur:

You were supposed to do a really loud Friday night LA cheer, (crowd cheers) well the moment is gone, the moment is gone people….NO IT’S NOT!!!. One more time I think, let’s do this! I’ll just go over there, (pointing to stage right) and ah, I want to hear a really good cheer on my really “Bitchen” entrance OK? The stage lights went dark and the Cardinal said;

“So ah, are you ready? (the crowd cheers and the Cardinal continues) then be quiet, quiet, shhh, shhh, here I come (as he walks across the stage) he shouts…goooooo!!!” And all of the crowd erupts into a deafening roaring cheer. The Cardinal responds in all his humor saying; “Thank you, you shouldn’t have!”

To get the song started the Cardinal said, this is not a song that’s, going down but a song that’s about “going down”. This was also the only acoustic song of the night with all the guitar playing Nameless Ghouls huddled in a semi circle on the steps of the stage, very entertaining.

The band finished Act 1 with stellar versions of three songs from their Prequelle LP, Pro Memoria, Watch Image and Life Eternal. For Life Eternal the Cardinal made his way up to the platform at the back of the stage that spanned the entire width of the stage, giving the Cardinal the opportunity to take full advantage of the walkway by strutting from one end to the other while the audience sang to the song’s chorus. 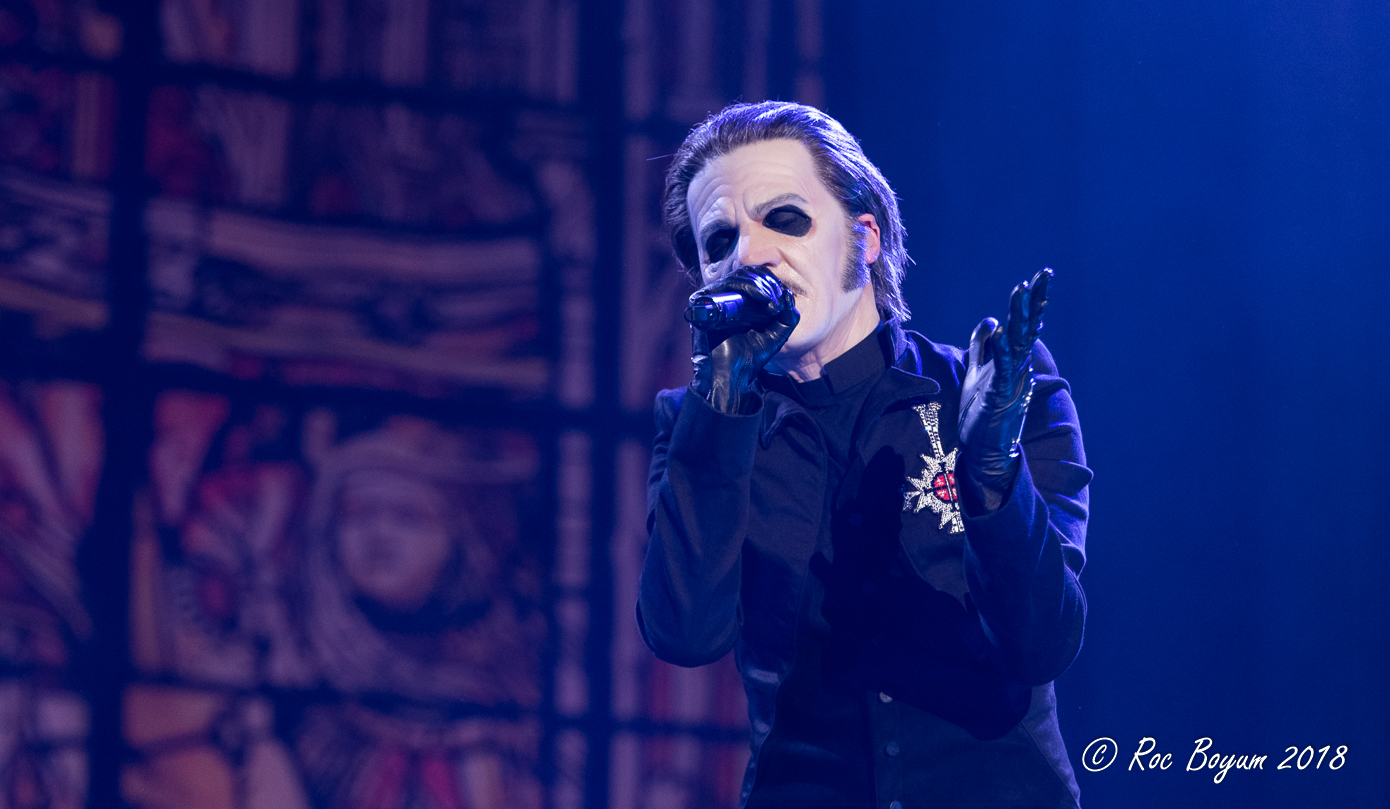 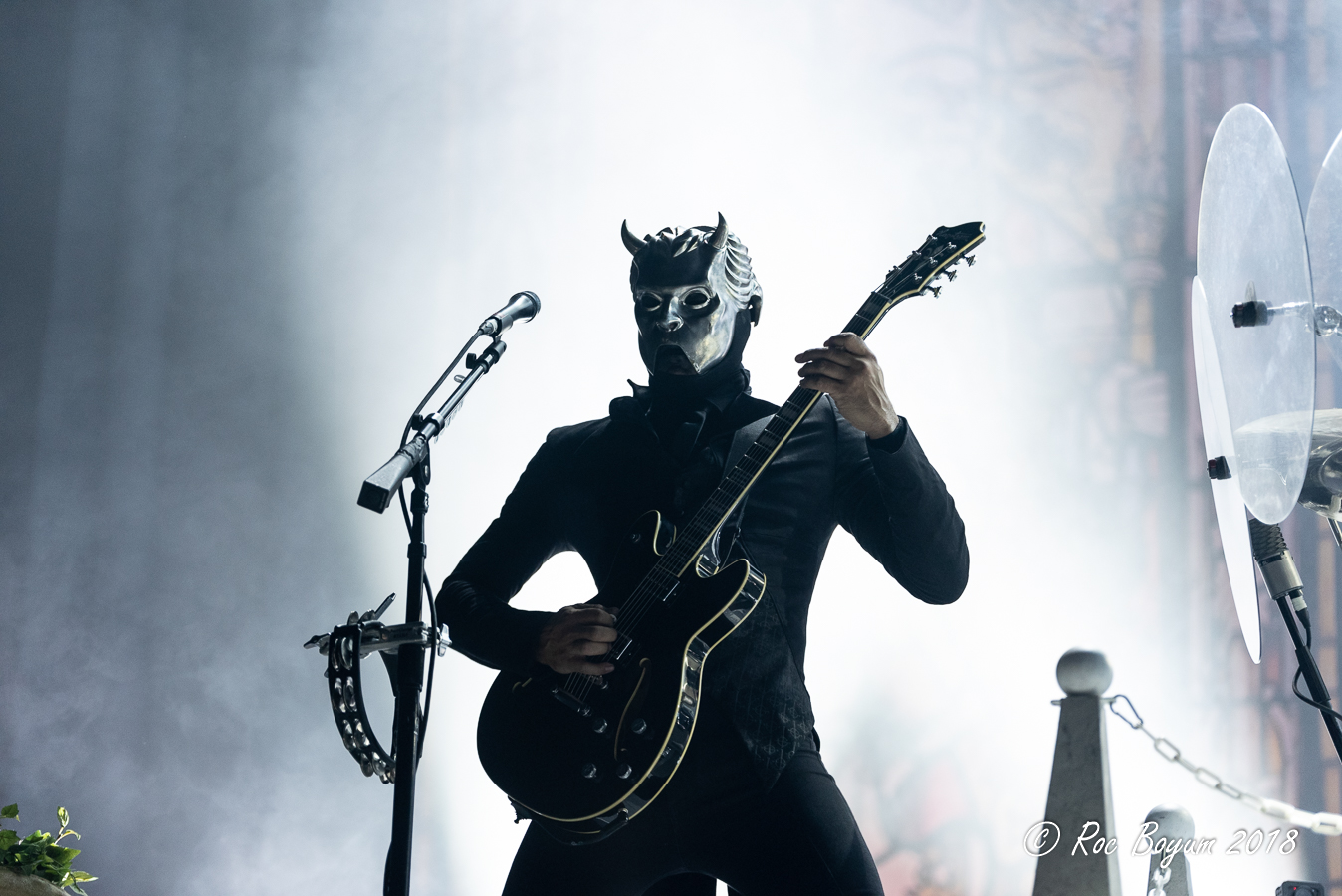 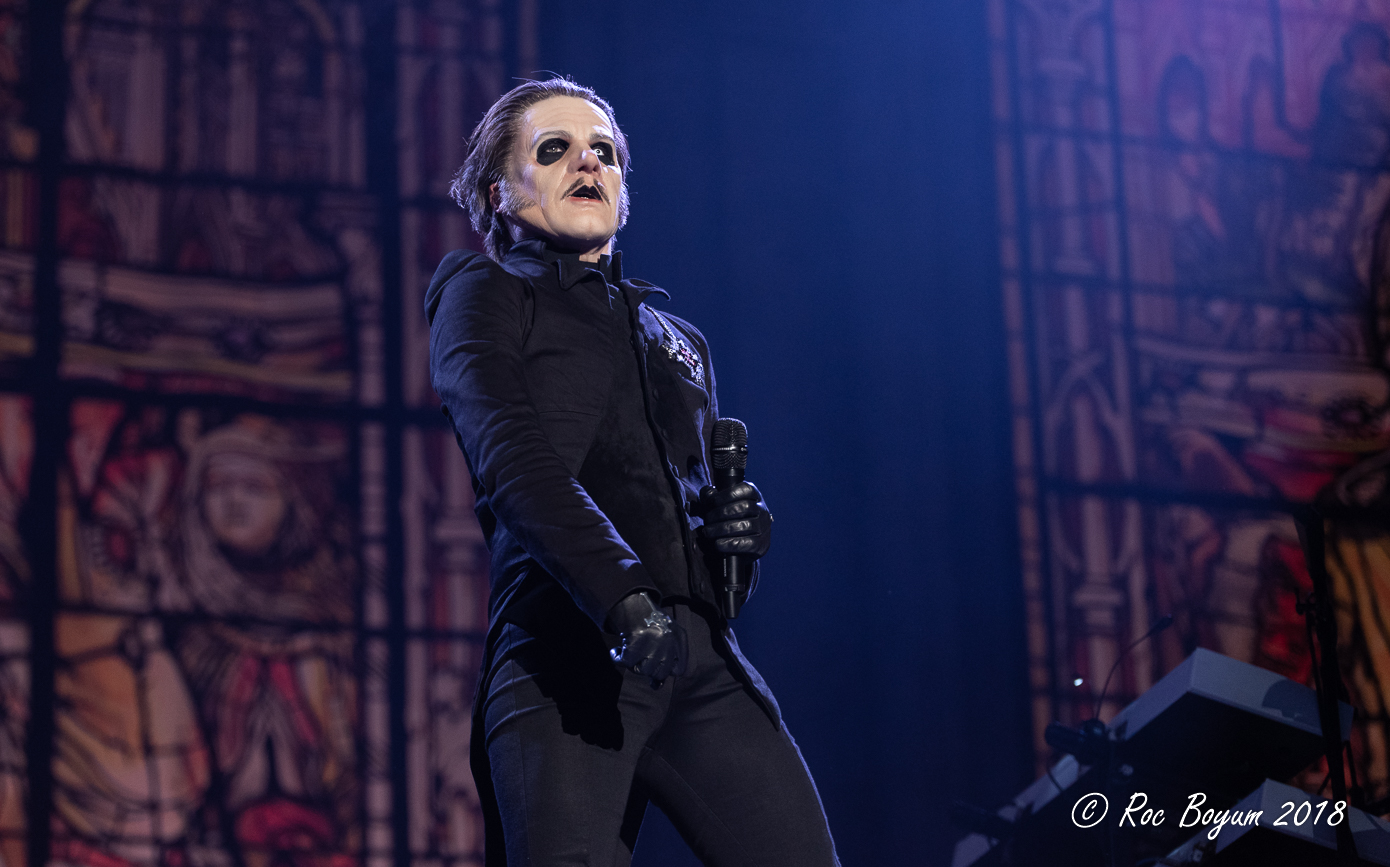 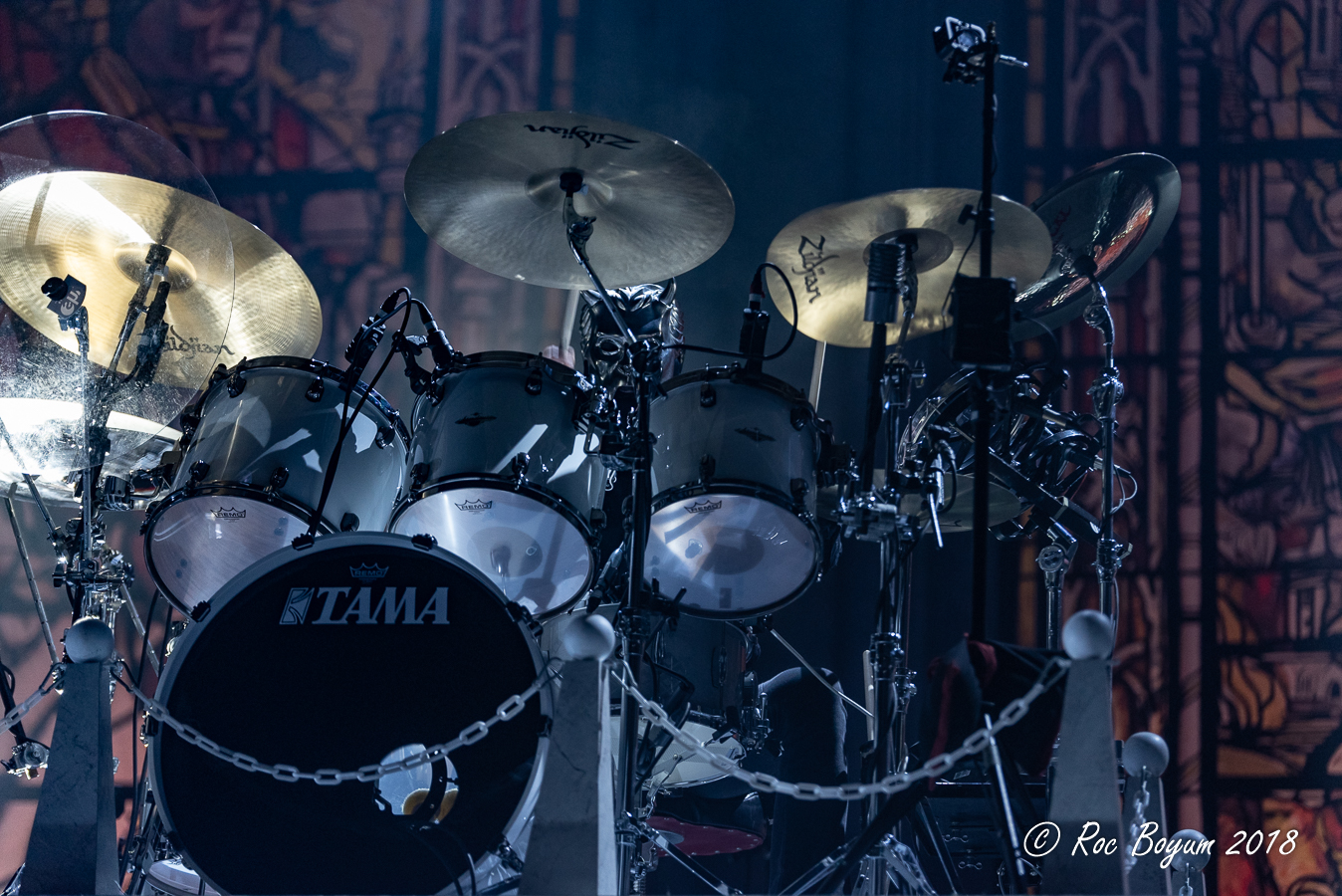 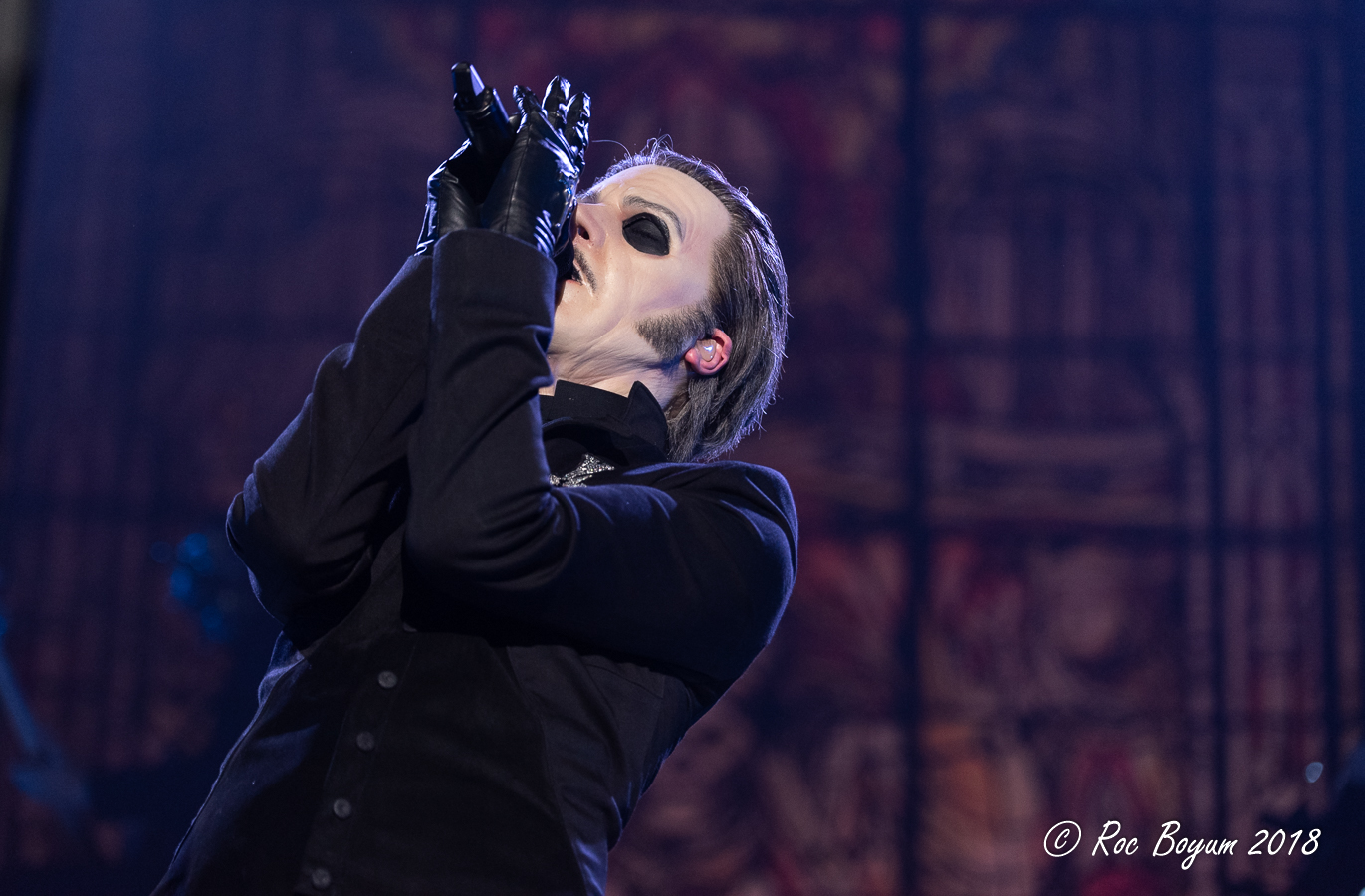 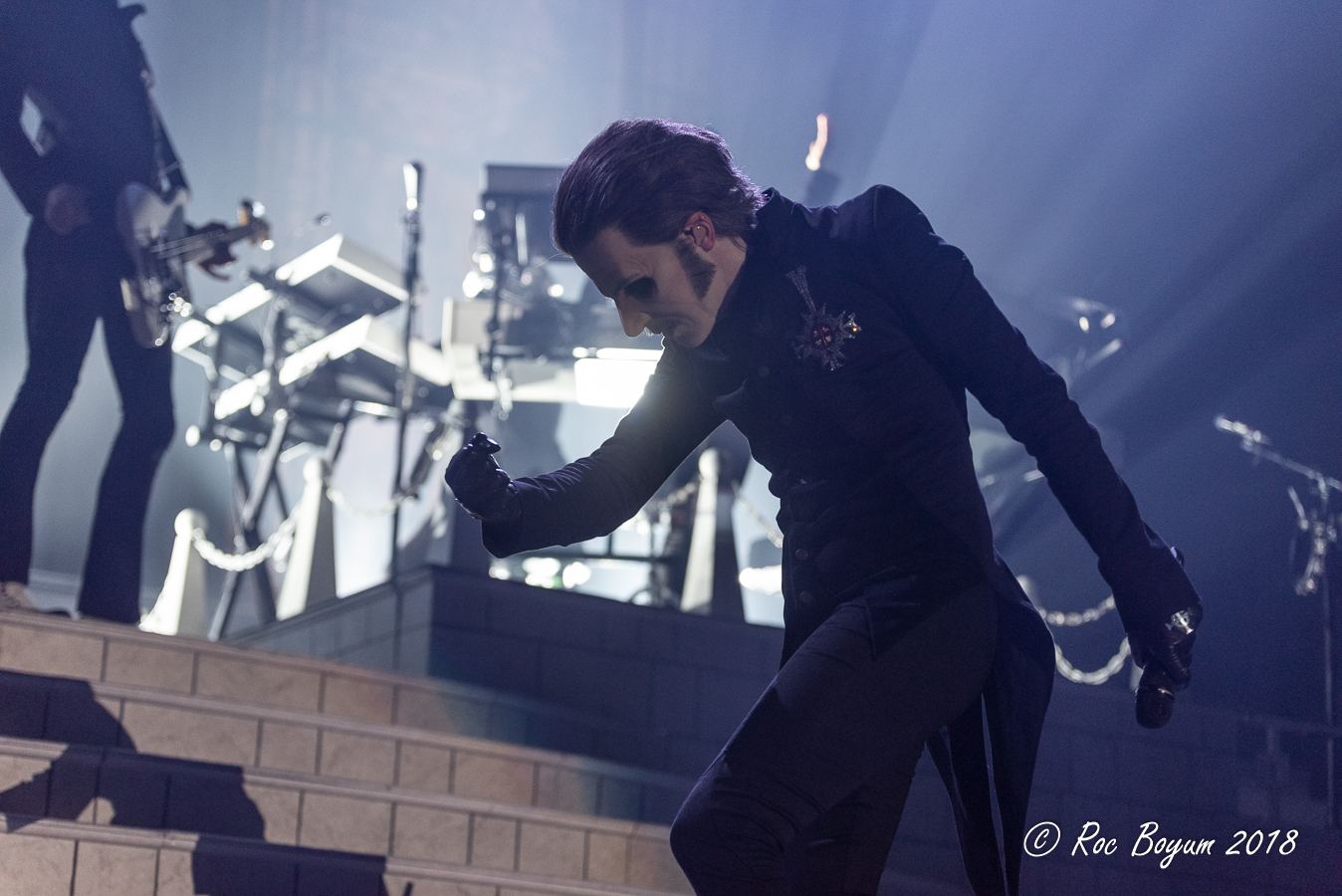 Act 2 opened with a darkened stage and spine-chilling music like you would hear in some type of 50’s horror movie. With a blast of green lights and an earnest guitar chunking away, the band launched into an Awesome version of Spirit from their Meliora LP; with the Cardinal, center stage and dressed in his Red robes. The band continued with another track from Meliora with the Nameless Ghoul, Master Ass Wobbling bass man grinding out the thunderous beginning to “From the Pinnacle to the Pit”.  The Meliora triple threat concluded with Majesty, a song that has a screaming guitar solo that was executed with brilliance by the Nameless Ghoul guitar player at stage right.

For Satan Prayer, the Cardinal came out appropriately dressed in his all black attire including a cape that was fit for a Count.

Year Zero came complete with red smoke on stage and fire blasts that seemed dangerously close to the Stained glass curtains that waved back and forth at the rear plank walk area at the back of the stage.

Mummy Dust came with a special introduction; here’s a shortened version of what the Cardinal said:

I know you didn’t come here to hear no Fucking ballads, we’re done with those ballads.
Did you expect to come here tonight to hear one song that is in fact so heavy, that it will Wobble Your Asses? Do You like to have Your Asses Wobbled??? (Crowd Erupts into a collective Cheer!) Here’s a song that’s so gosh darn Heavy, that it’ll tickle you “taints!” Do you like to have your “taints” tickled Los Angeles? (Crowd Erupts into a resounding Cheer!) Well I’ll tickle it real good!! the way you’ve never been tickled before!!!

The band blasted the roof off the Forum with a crushingly Heavy version of Mummy Dust!

For the cover of the Roky Erickson song, If You Have Ghosts, the Cardinal introduced each band member during the song’s breakdown by simply saying; and over here we have Ghooooul!!! The bass playing Ghoul received an extra special introduction as the Cardinal said; “and here’s the Master Ass Wobbler……Ghooooul!!!

The band finished the night with killer versions of “Dance Macabre”, “Square Hammer” and the Encore with “Montrance Clock”.

Yes, undeniably, GHOST  is an Amazing band and the Cardinal does indeed have a great sense of humor, a seriously loyal fan base and the expertise to put on one HELL of a show (pun intended), that’s for damn sure!!!

The GHOST setlist was:

From the Pinnacle to the Pit

If You Have Ghosts-Roky Erickson Cover