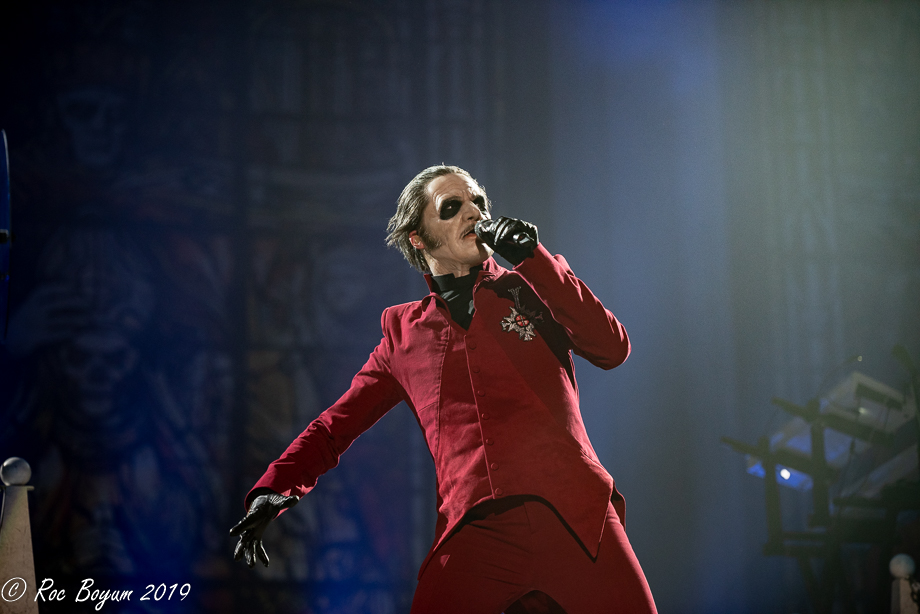 GHOST brings their Ghoulish magic with this, the second leg of; “The Ultimate Tour Named Death” just in time to usher in the fall and Halloween season. This incarnation of the tour continues with their previous elaborate stage set-up that is fashioned like a scene from a Romanesque Church, with a full sized backdrop, that resembles the stained glass windows in a church (only with a Ghost touch). The band cast consists of the Nameless Ghouls and ring master Tobias Forge.

For this outing, Ghost are hitting new and different markets from their first manifestation  of this tour, and this Rabobank Arena show in Bakersfield, CA was the first night of the tour.

This audience was so pumped and ready for Ghost, that way before the show came close to starting, the audience was cheering and whistling during the stage set routine by the stagehands and roadies. At one point in particular during the band’s stage setup, a giant audience uproar occurred. All the crazy audience outcry was surrounding the roadies attempt to untangle a knotted black curtain that is designed to conceal the roadies as they set the stage; unfortunately the curtain was not cooperating. After a bit of time and nearly the entire road crew working on the entangled mess, they successfully unfurled the knotted black curtain which evoked a resounding audience cheer. Upon their success, one concert goer yelled; You untangled the F..k out of that curtain! Yes indeed, these guys were pumped!!! 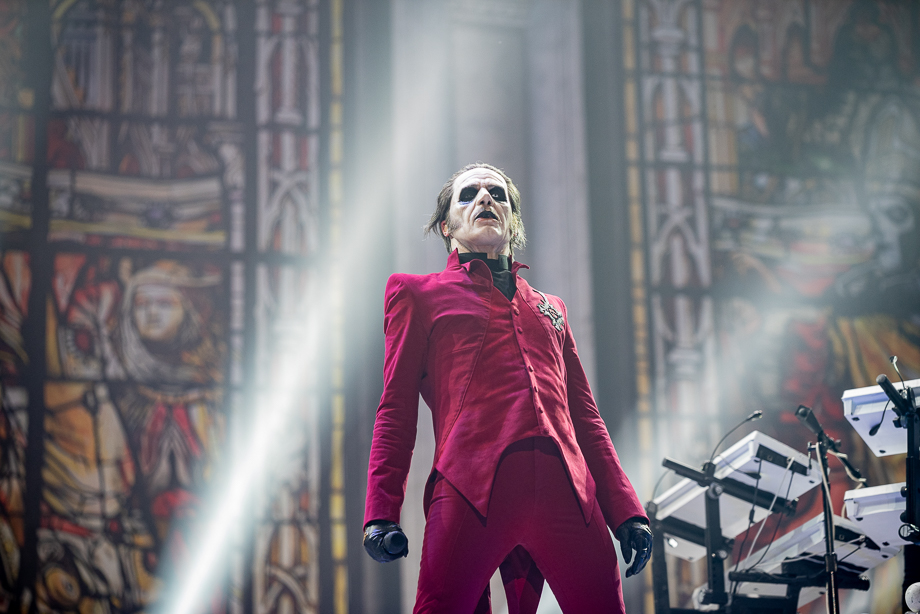 The show began under a shroud of darkness with the beginning of Ashes from their Prequelle LP, with it’s low keyboard rumble that reverberated throughout the venue. The children’s voices in the song added an eerie atmosphere to the anticipation of the band’s arrival. Then all of a sudden, the Nameless Ghouls appeared in a burst of light that punctuated the song’s power chords and was immediately followed by a succession of rapid firing strobe lights. The band seamlessly dove into a thunderous version of “Rats” from their Prequelle LP with the band’s ring master, Tobias Forge leading the entire audience into a sing-a-long of the song’s chorus.

The band continued their assault by ripping through blistering versions of Absolution-(Meliora), Faith-(Prequelle), Mary on a Cross-(Seven Inches of Satanic Panic), Devil Church-(Meliora) Cirice-(Meliora) before diving into Miasma-(Prequelle). Miasma is a new fan favorite that features Papa Nihil on saxophone who was jamming away in a mysterious shroud of smoke throughout his performance. At one point during his performance, Papa Nihil fell back, and was fortunately caught in mid air by a crew member. It was unclear whether he simply tripped, or if he was passing out from all the smoke that surrounded him; in any case; Papa Nihil jammed out the whole song without a miss, musically, right through to the end, brilliant!. 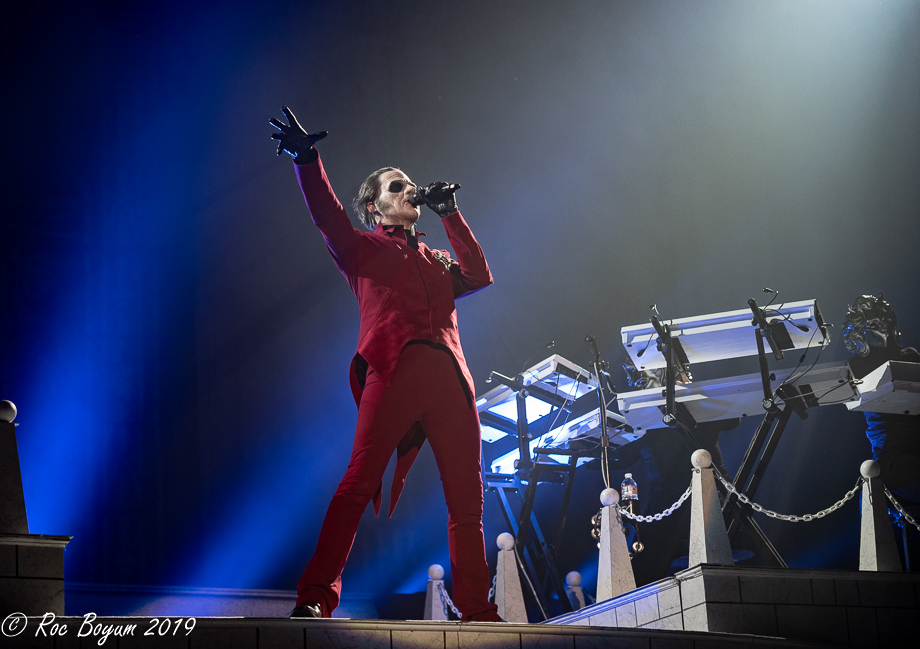 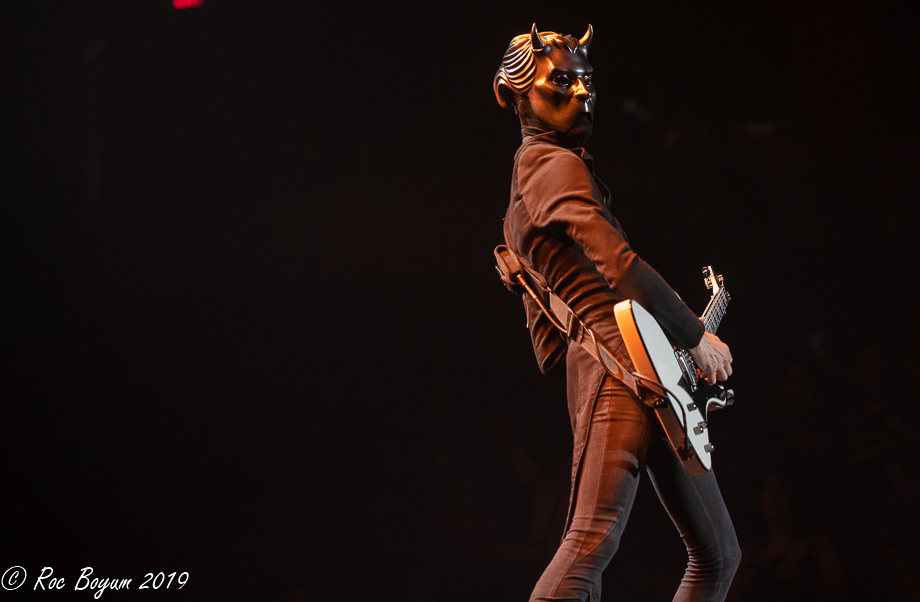 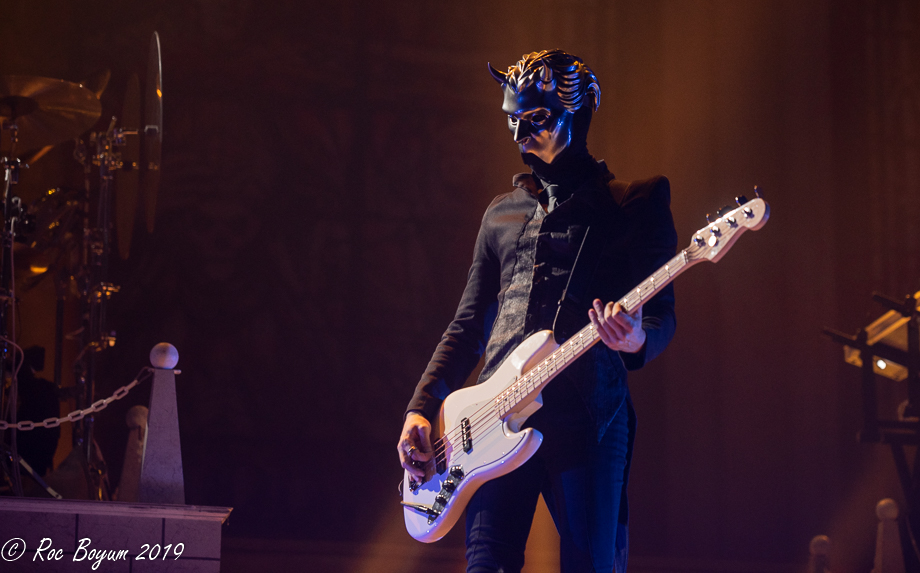 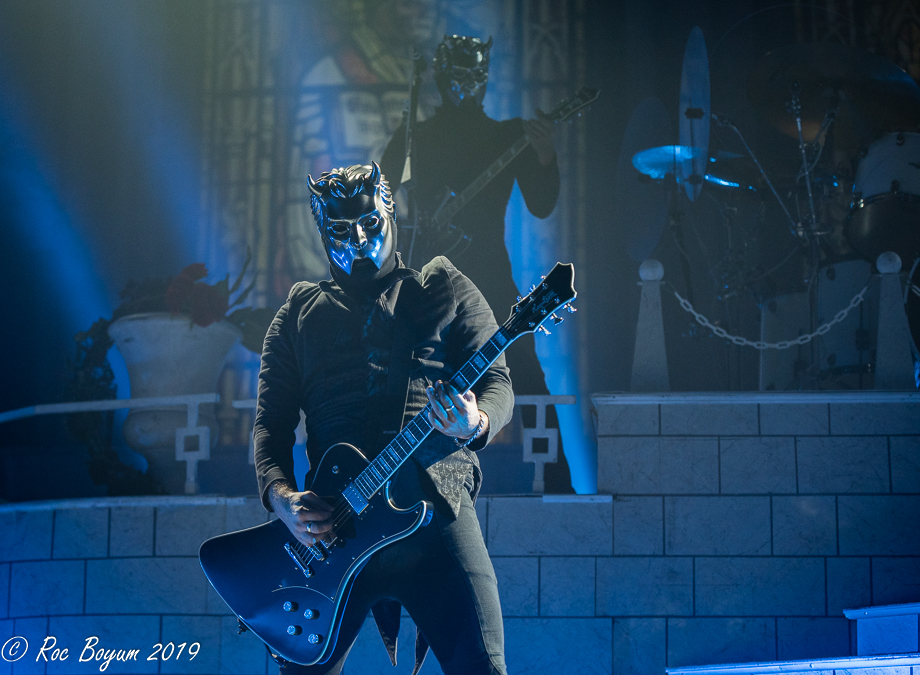 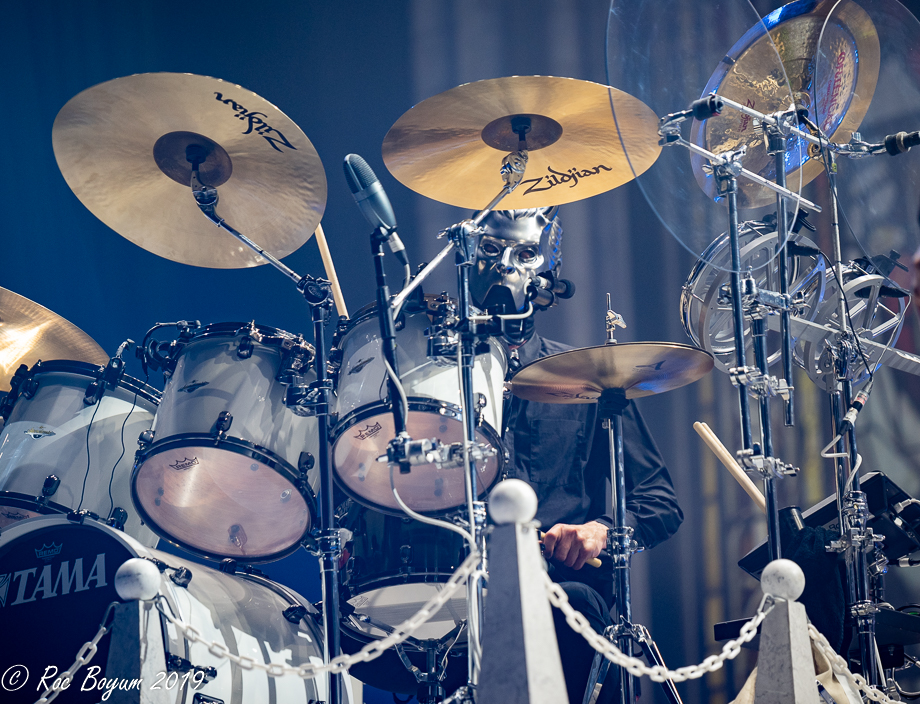 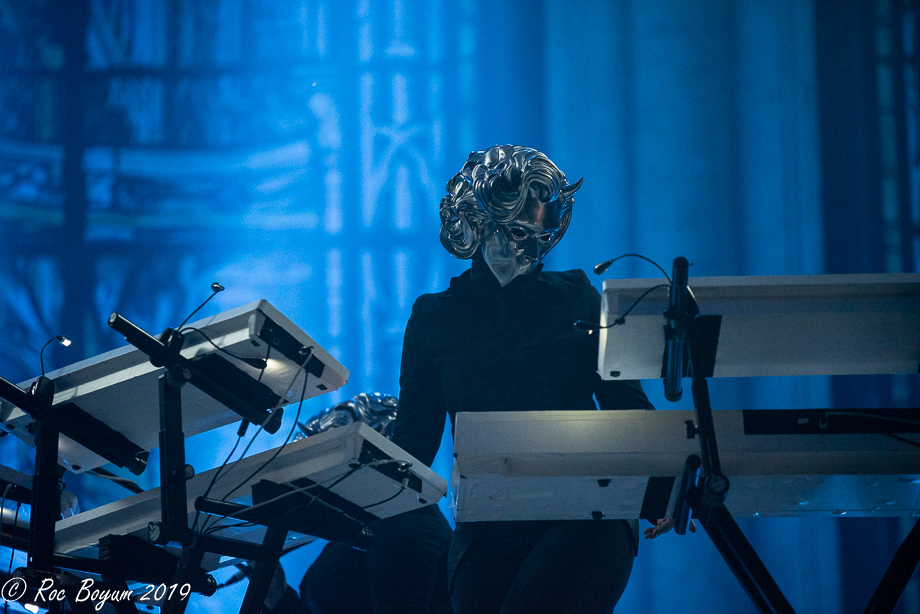 The band ripped through the next songs including Ghuley/zombie Queen, Helvestesfonster, and Spirit before diving into Pinnacle. During Pinnacle, the entire audience joined in, to sing the chorus lines; From The Pinnacle to the Pit! The song also came with a couple surprise explosions that got everybody’s attention…Great Fun Indeed! 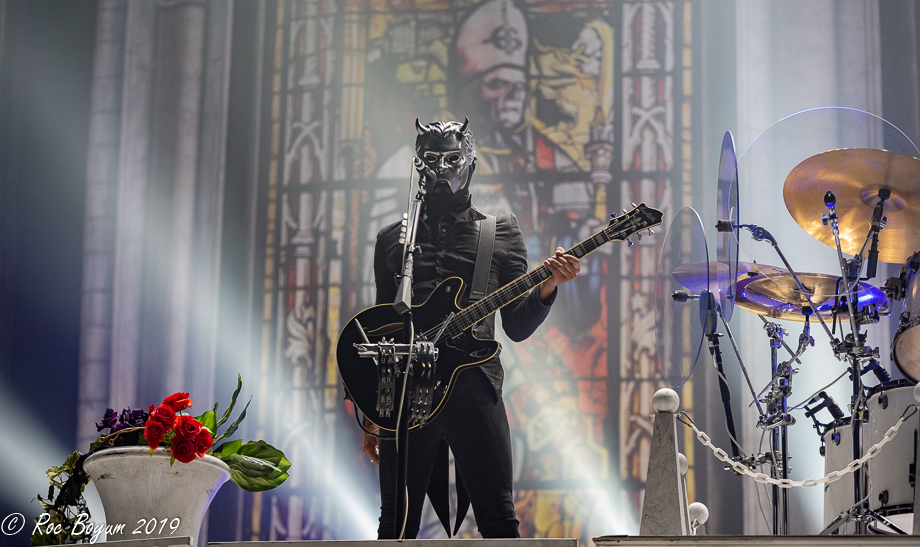 Year Zero received one of the loudest audience sing-a-longs, and the next song Mummy Dust was introduced by the Cardinal, who asked: Do you want something really rough?

Mummy Dust was absolutely the heaviest song of the night and concluded with a Mummy Dust confetti shower that rained over the audience and was then followed by the debut of Kiss The Goat Prequelle.  Dance of the Macabre from their Prequelle LP received the greatest audience participation of the night with everyone singing; Just wanna be, Just wanna bewitch you in the moonlight.  The final song of the night was a pounding version of Square Hammer from their Popestar LP. Square Hammer started off with some great strobes and flash pots, and the Cardinal at the top of the stage alter stairs. The song concluded with a fireworks waterfall and the Cardinal blowing kisses of appreciation to the audience as he walked from one side of the stage to the other.

Ghost definitely puts on one “Hell” of a show and Tobias Forge, aka The Cardinal, is a uniquely entertaining front man who throws in just the right amount of humor to make their show an incredible concert experience. 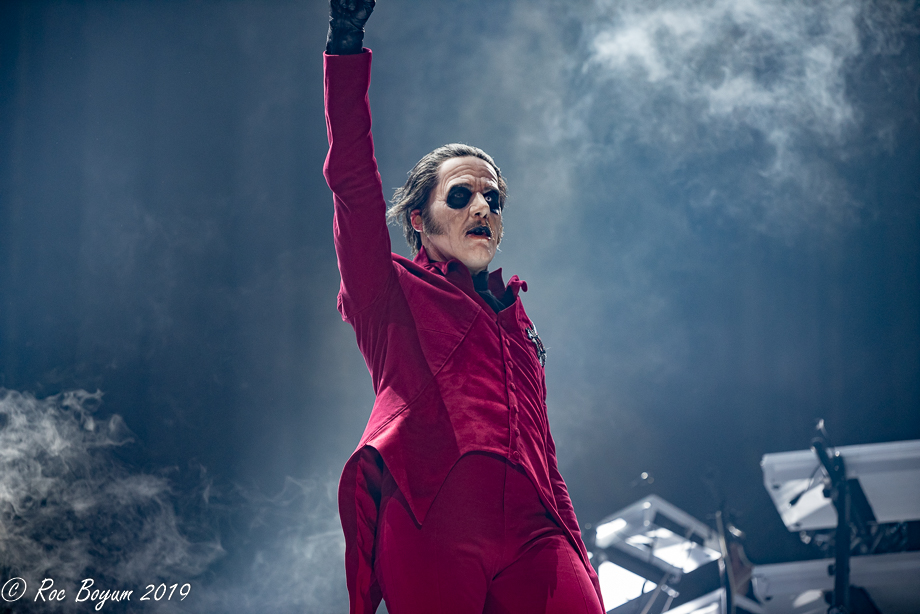 Check out everything Ghost here!