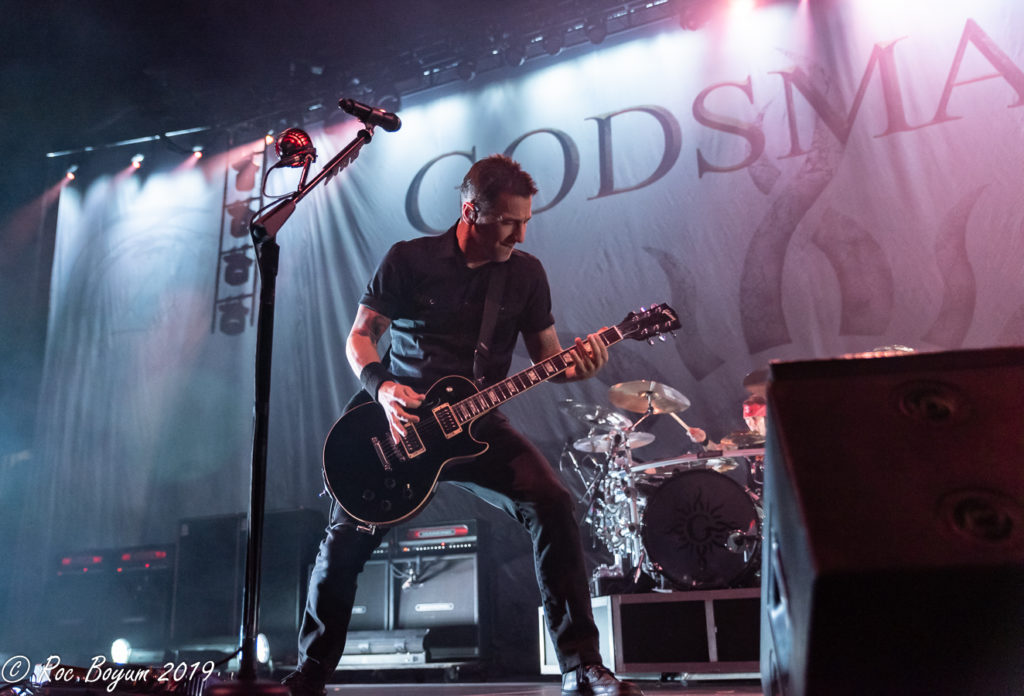 Godsmack are an ALT/Hard Rock band that has released a total of seven LPs to date, three of which are certified Platinum (1,000,000 sales each) and another two LPs that have been certified Gold, (500,000 sales each). The band is fronted by the master and multi-talented musician, Sully Erna. Erna is not only the band’s frontman/singer but he also quite impressively plays guitar, piano and is one hell of a drummer; yes, drummer.

Before Godsmack entered the stage, they fired up the audience with a brilliant recorded medley of songs including, Queen’s, We Will Rock You, Rush’s Tom Sawyer and The Beatles Hey Jude. The band played an extensive 14 song set, culling songs from five of their seven studio LPs. They unleashed six songs from their latest “When Legends Rise” LP, and eight more from the LPs, Godsmack (1998), Fearless (2000), Awake (2003) and The Oracle (2010).  The band opened with the heavy tribal drum intro off the title track to their LP, When Legends Rise. The song Unforgettable from When Legends Rise received one of the loudest sing-a-longs of the night. 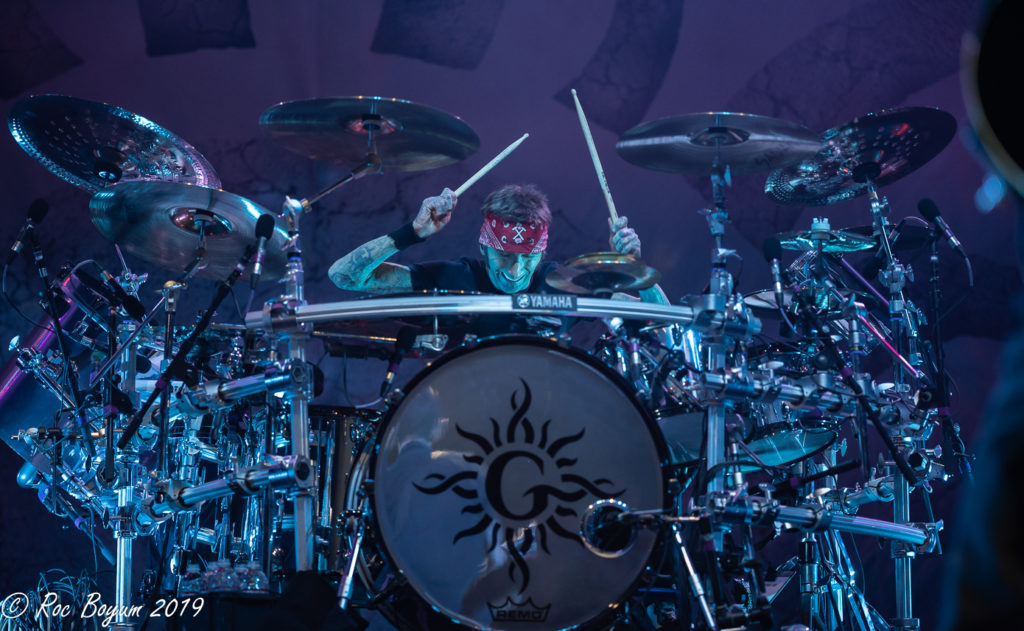 The band is well known for their highly entertaining duo drum solo that features singer Sully Erna and drummer, Shannon Larkin. For this incarnation of their drum battle titled, Battlla de los Tembores, Larkin’s drum kit rotated on a track from his position at center stage out to stage left.  Sully’s drum kit was hidden from view behind the main stage curtain and came wheeling out on a track that brought his drums to the front of the stage with the two drum kits facing the audience. The two master percussionists dished out some Latin/Rock grooves that had Larkin wailing away at his drums with sticks in hand while Sully engaged his drums like a mad percussionist, playing the drums “Bonham style” with just his hands. The two drum kits then rotated to bring the drummers face to face. Facing each other, the two drummers continued with their Latin/Rock grooves while tossing their sticks high into the air and tossing them back and forth across the stage to each other like a crazy juggling team. For their conclusion, the drummers were joined by bass-man Robbie Merrill and guitarist Tony Rombola to assault the audience with a medley of songs that included, AC CD’s Back in Black, Areosmith’s, Walk This Way and Metallica’s, Enter Sandman. They concluded their “tour de force” drum exhibition with a song that is synonymous with virtuoso drum fills; Rush’s, Tom Sawyer. The drum fills in Tom Sawyer as executed by Neil Peart have not only inspired drummers the world over but have beckoned drummers of all styles to step up to the plate, push the boundaries of their drumming and carry the torch for their generation. Considering that Peart’s drum fills are the most emulated “air drum” fills in history, it was an incredible sight to see the Rabobank Arena filled with a mass of flailing air drumming arms making this the perfect complement and nod to one of the greatest progressive rock drummers of all time; all hail the Professor!!! 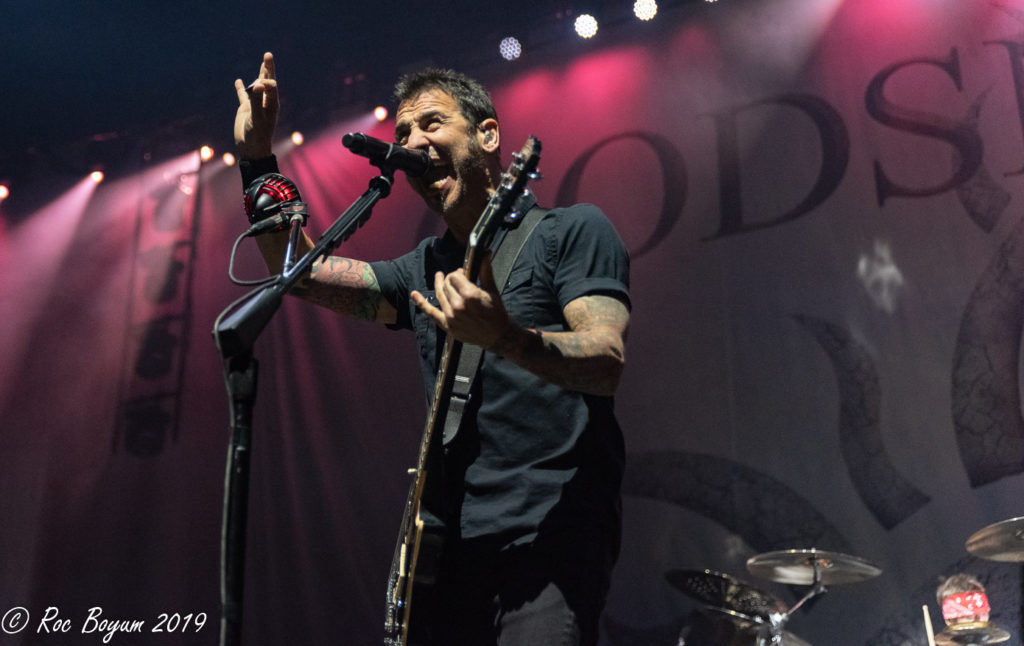 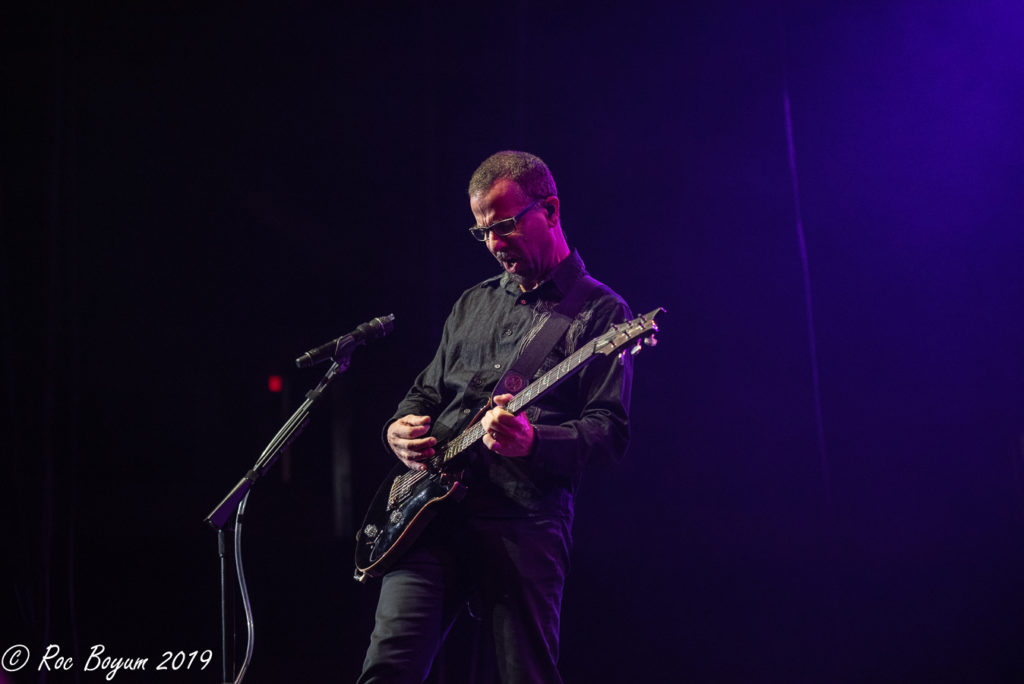 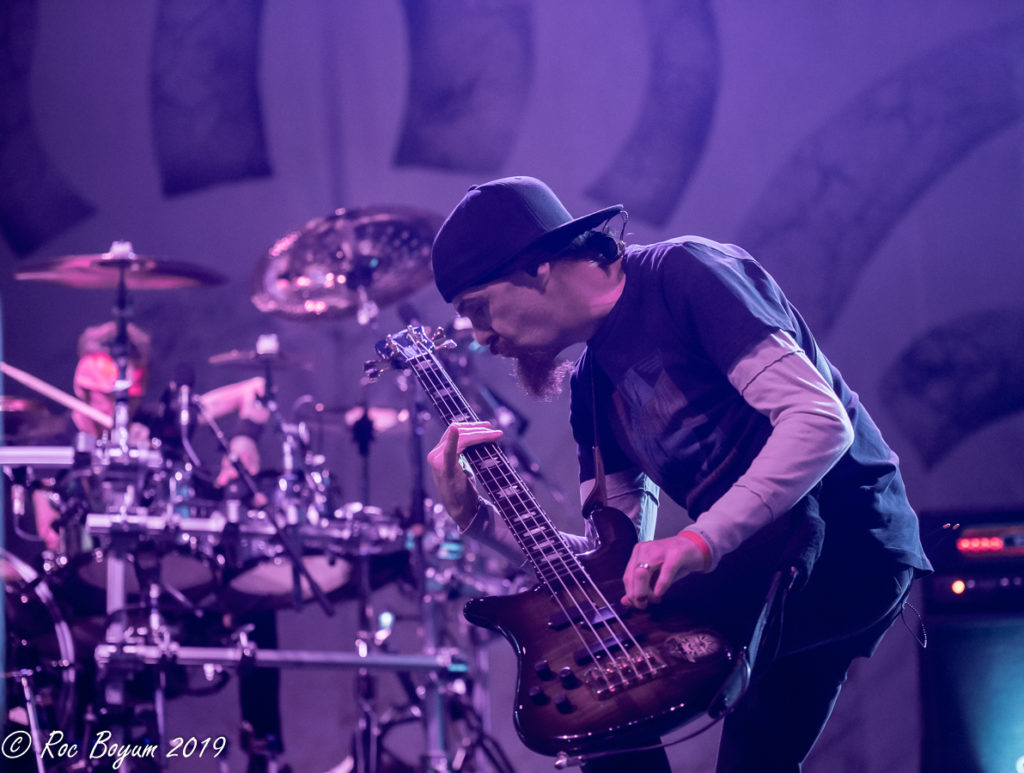 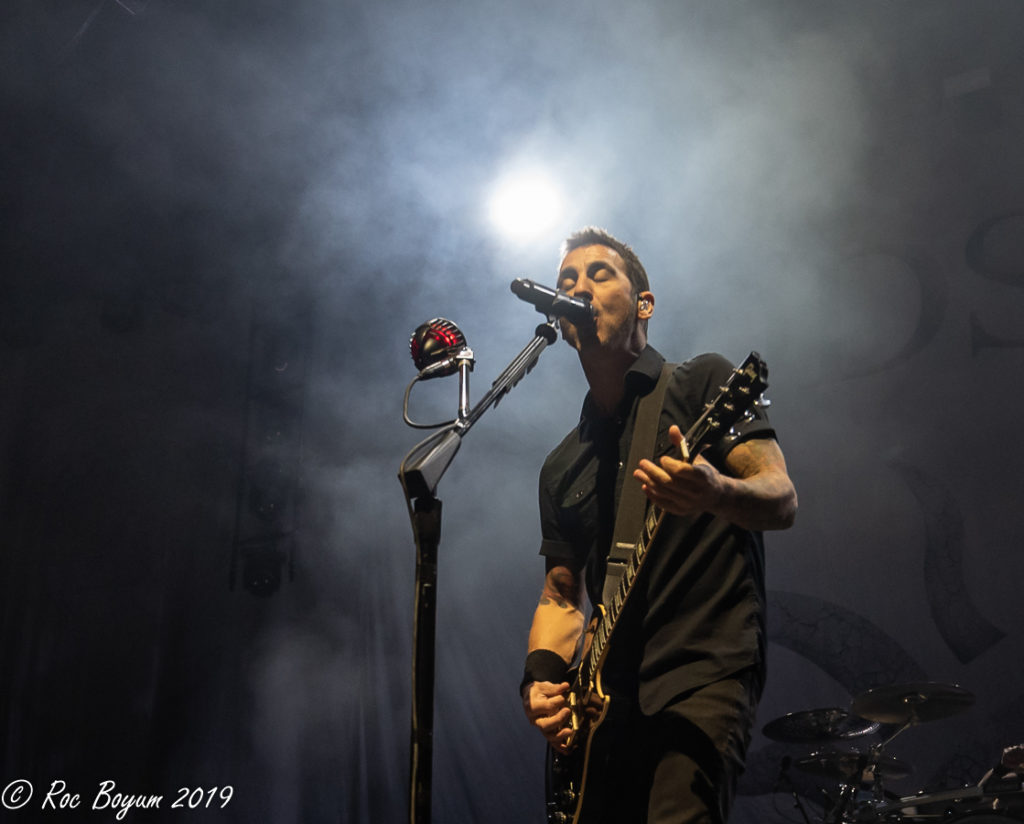 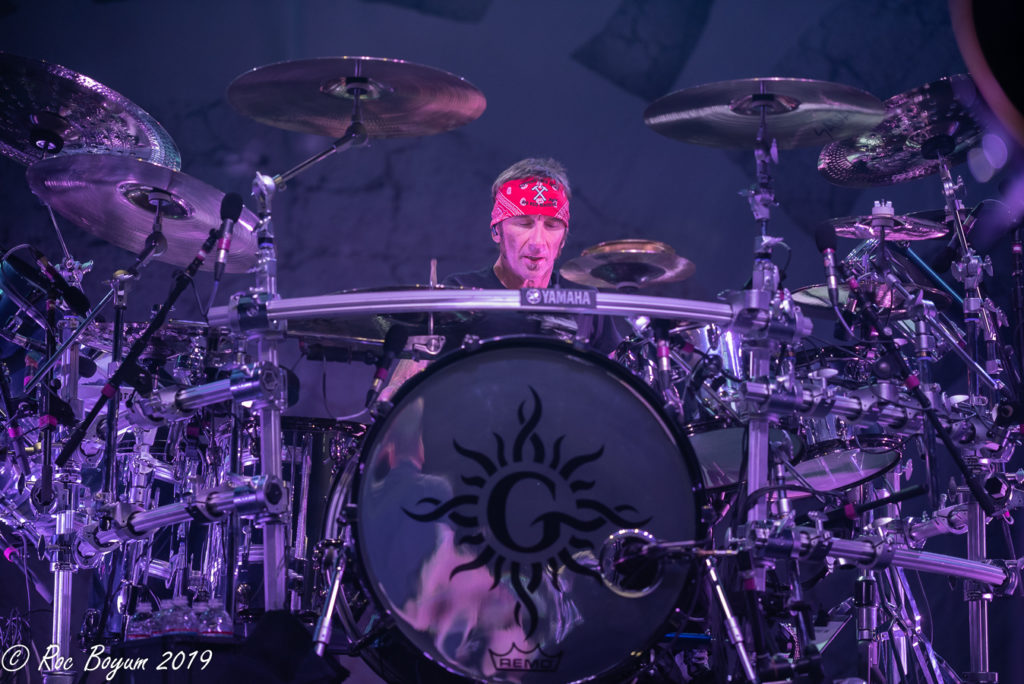 The band followed up with an emotional and moving song from “When Legends Rise” called “Under Your Scars”, a song that’s very dear to this band and was inspired after their meeting and conversation with Lady Gaga. The band has coined the term
“Scars” to address the difficulties that many of us face with mental illness, depression, addiction and bullying. From their meeting with Lady Gaga and through the bands’ own personal experiences with people near to them that have actually lived through these “Scars”; the band decided to take action by founding a foundation to those out there that are in need of outside help.  The foundation was formed by the band and in conjunction with many world experts to help battle these “Scars” that effect all of us; directly and or indirectly.

You can help heal these “Scars” by reaching out at to the band at:  Godsmack.com/scarsfoundation.

The band then paid a tribute to one of the all time greatest song writing teams of all time, Bernie Taupin/Elton John with their cover of the Elton John classic; Saturday Nights Alright for Fighting.

Sully introduced the song by saying;

Since it’s Saturday night here in Bakersfield CA, lets’ do a song just for fun!

As they launched into the Elton John classic, Sully immediately felt and knew that something was a little off!

Sully stopped the song as they were getting underway and asked guitarist Rombola in a joking manner; what the hell are you doing?-You’re playing in the wrong key man. With an exchange of laughter between the two musicians, Sully exclaimed;

“There’s no tapes here, this is as real as it gets people, we’re live”!

After a thunderous applause of appreciation from the crowd, the band went on to rip up a scorching version of Saturday Nights Alright for Fighting with the audience singing along and having an a truly Awesome party this Saturday.

The band finished the night with a shredding version of “I Stand Alone” from their Faceless LP. Sully and company delivered the song with the conviction of the character  as played by “The Rock“, from the movie, the Scorpion King; a man battling against the odds and fighting the good fight; on his own.

Take it to the Edge