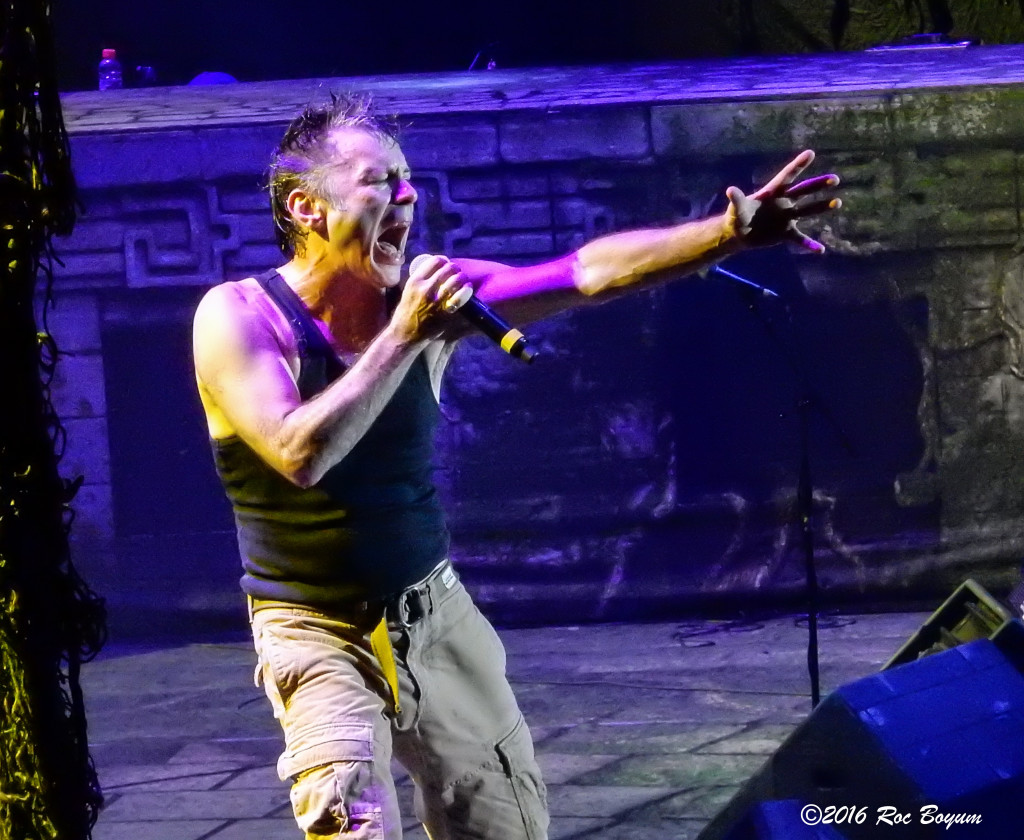 With the return of the Metal Gods in 2017, LA Metal Media remembers the Iron Maiden Frenzy in Los Angeles in 2016.

With the landing of Ed Force One at LAX on April 14, the atmosphere in Los Angeles officially became Maiden crazy.

For two sold out nights, April 15/16 Iron Maiden detonated the Los Angeles fans with The Book of Souls tour. These were the last two shows of their North American leg of this Epic Book of Souls World tour and on the second night Bruce Dickinson told the audience; If we would have known that this many people didn’t give a F..k  about Coachella we would have stayed here (at The Forum) for a week!!! 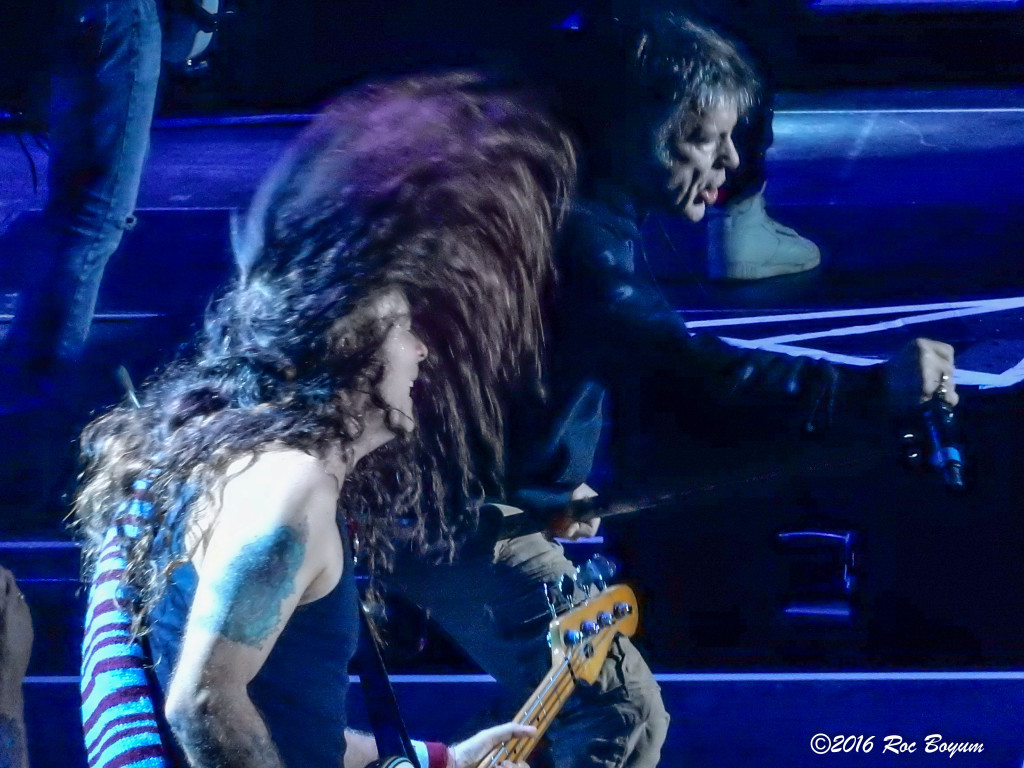 The evening was an Iron Maiden assault of new and classic material from their LP’s The Book of Souls, Fear of the Dark, From Fear To Eternity, Iron Maiden, The Number of the Beast, Piece of Mind, Powerslave and Somewhere In Time.

It’s great to see a band with such an incredible history still able to put out new music that is as relevant today as are the classics they are so well known for. New material is always great for a band to play live, especially a band with a 40 year history like Maiden, but it’s not always the same for the fans. For Maiden fans the new material was not only well received but songs from their latest Book of Souls LP like If Eternity Should Fail and The Book of Souls were highlights of the evening. 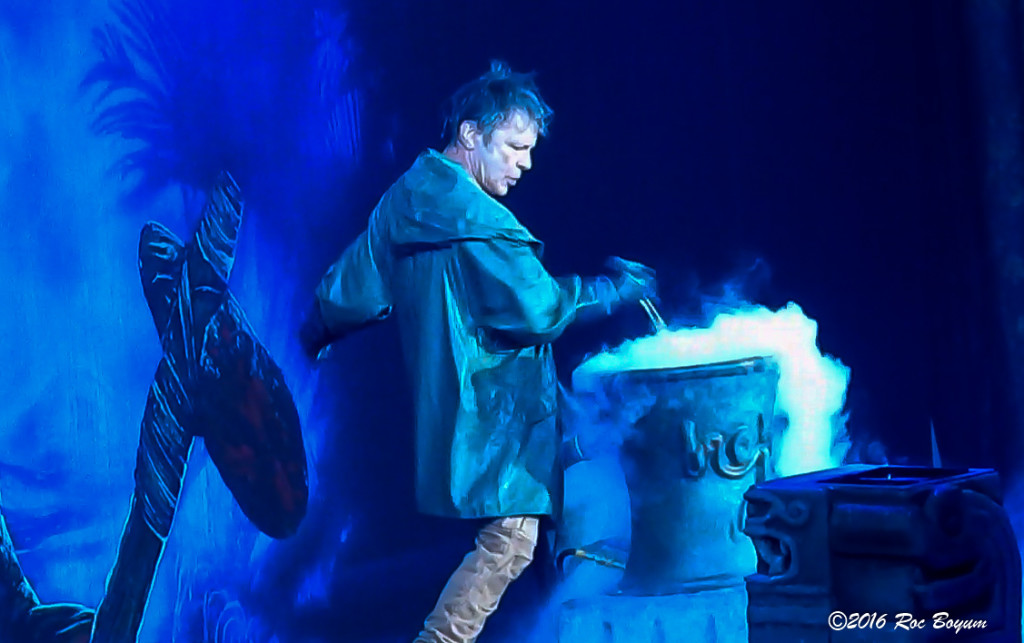 As the lights dimmed, the thunderous roar of the crowd became silent as a single follow spotlight was focused on Bruce Dickinson.  Dickinson was the only band member on stage, high on a platform above the drum riser and standing before an alter with a cauldron that erupted with fog. Then, the sound of an eerie keyboard and Dickinson’s solo vocals, echoed throughout the venue introducing the beginning of “If Eternity Should Fail” from The Book of Souls LP. As Dickinson’s voice faded on the song’s entrance the band burst onto the stage with a force and sound that was as powerful as Ed Force One, the band’s 747.

Dickinson ran to the front of the stage in great form with the same energy he possessed in the 80’s. This was not the vision of a man on the mend or a recent cancer survivor; this was a man on fire, this is Bruce Dickinson one of the most energetic and entertaining front men in metal history. The band then blew straight into a blistering version of Speed of Light from The Book of Souls LP, a song that was destined for the stage from it’s conception.

Check out Iron Maiden live with “Book of Souls” here:

The band then dove into the first classic song from their back catalog with Children of the Dammed from their masterpiece LP; The Number of the Beast.  Dickinson then introduced Tears of a Clown from The Book of Souls LP stating this was a song about the late/great Robin Williams which proved to be even better live than on disc.

Next was the incredibly brilliant, The Red and the Black from The Book of Souls LP with one epic guitar line after another; destined to be a Maiden classic. The Trooper from their magnum opus LP, Piece of Mind followed and received the loudest sing along of the night with the capacity crowd singing over the volume of the band which was quite considerable.

The band continued to blaze through blistering versions of Powerslave and Death or Glory followed by The Book of Souls from the LP of the same name; an absolute high point in the show. During the song, The Book of Souls, Dickinson battled a 13 foot tall Ed  (the band’s mascot) from up high on the runway above the drum riser. The battle ensued until Dickinson ripped out Ed’s heart and then ran down the runway to stage left;  taunting the audience with Ed’s heart until he threw the heart out into the audience. The massive crowd on the GA floor seized Ed’s heart like a school of ravenous Piranha.

Before the encore, the set finished with a stellar version of their song, Iron Maiden from their 1st LP of the same name.

After the 3 encore songs; The Number of the Beast, Blood Brothers and Wasted Years nobody wanted to leave the venue. We had just witnessed nearly 2 hours of explosive metal from one of the all time British Metal luminaries in rock and metal history; AND nobody, Absolutely NOBODY, wanted this night to end.

If Eternity Should Fail

Children of the Damned

Tears of a Clown

The Red and the Black

The Book of Souls

Hallowed Be Thy Name

Fear of the Dark

The Number of the Beast

For full Iron Maiden news and updates on the tour check out the band’s website http://ironmaiden.com/