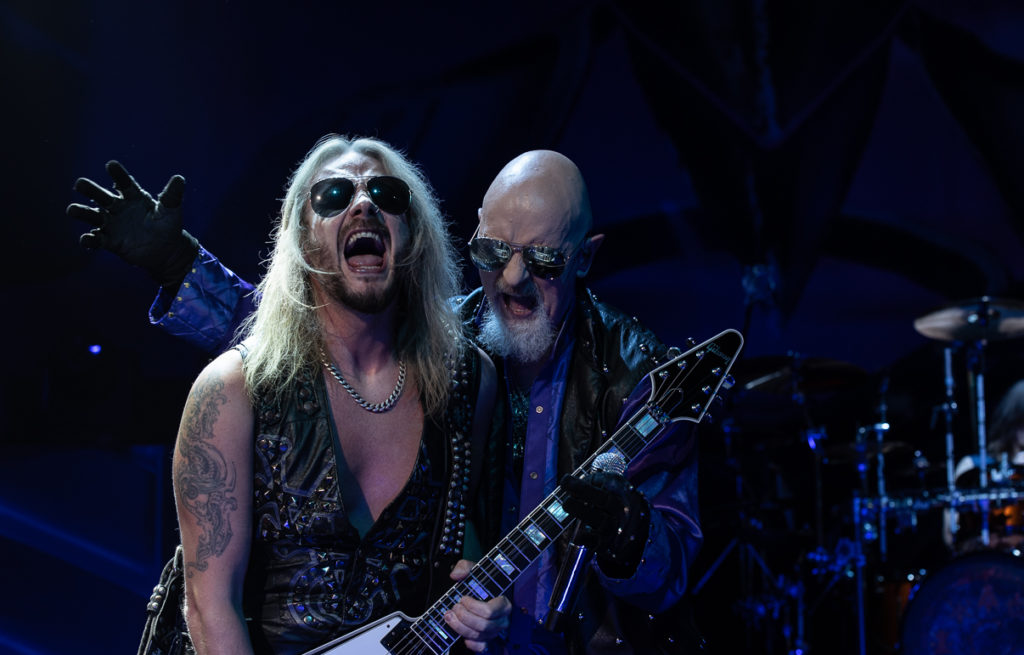 The Metal Gods, Judas Priest returned to the Microsoft Theater with another leg of their Firepower tour but for this outing, they changed things up a bit. For this trek, they’ve chosen not to rest on their fame with a night of their greatest hits; which they could easily do. Instead, they’ve chosen to play some of the deeper cuts from their vast catalogue while simultaneously taking the fans on a journey through the history of Priest. In doing so, some of the material on this tour may elude the casual listener but to the serious Priest fans; this was a long awaited metal feast!

The band culled songs from 12 of their 18 studio LP’s with only a sprinkling of hits such as Heading Out On The Highway, Victim Of Changes and Halls Of Valhalla in their main set. On June 25th in San Francisco, the band added one additional hit song to their main set; Hot Rockin’ from their 1981 classic LP, Point Of Entry.

From their Redeemer of Souls LP they served up the incredible “Halls of Valhalla” that incorporates two separate guitar solos. The first solo is one of their signature/classic dual harmony guitar solos that guitarists Richie Faulkner and Andy Sneap delivered with razor sharp perfection. The second solo, is preceded by a breakdown in the song, where Halford delivers the repeating line; Halls Of Valhalla, Halls Of Valhalla, Halls Of Valhalla, in a deep demonic growl. This unearthly growl, escalates into one of those incredible Halford head shredding screams, that rains over the entire venue and then gives way to the second guitar solo. For this second solo, Faulkner sets his guitar fret board on fire with a blazing solo that takes off like a UFO jumping into light speed. 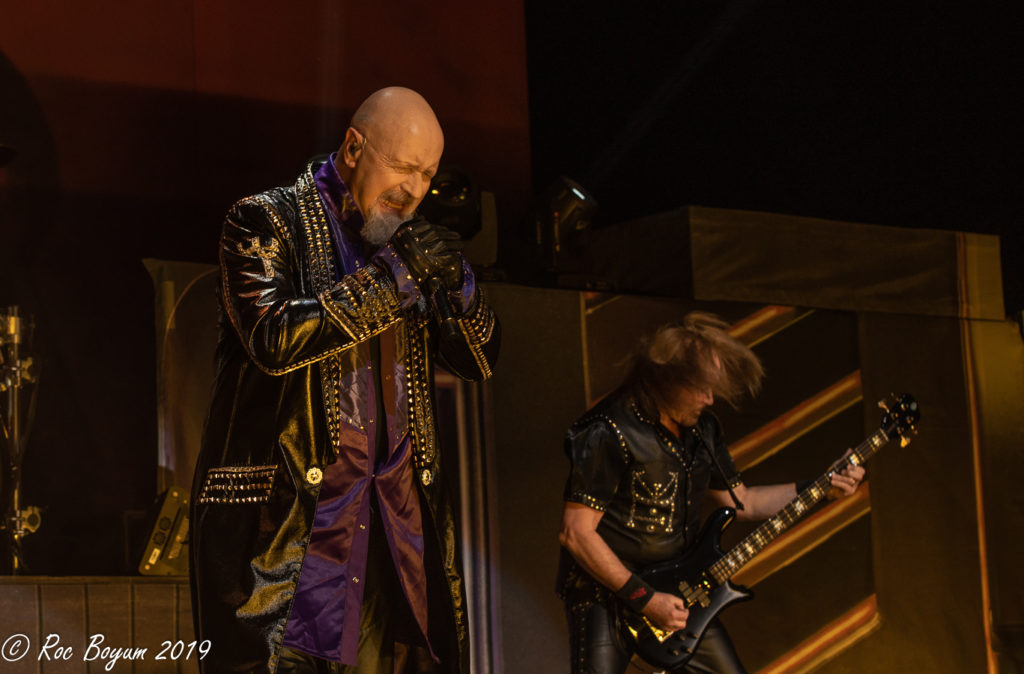 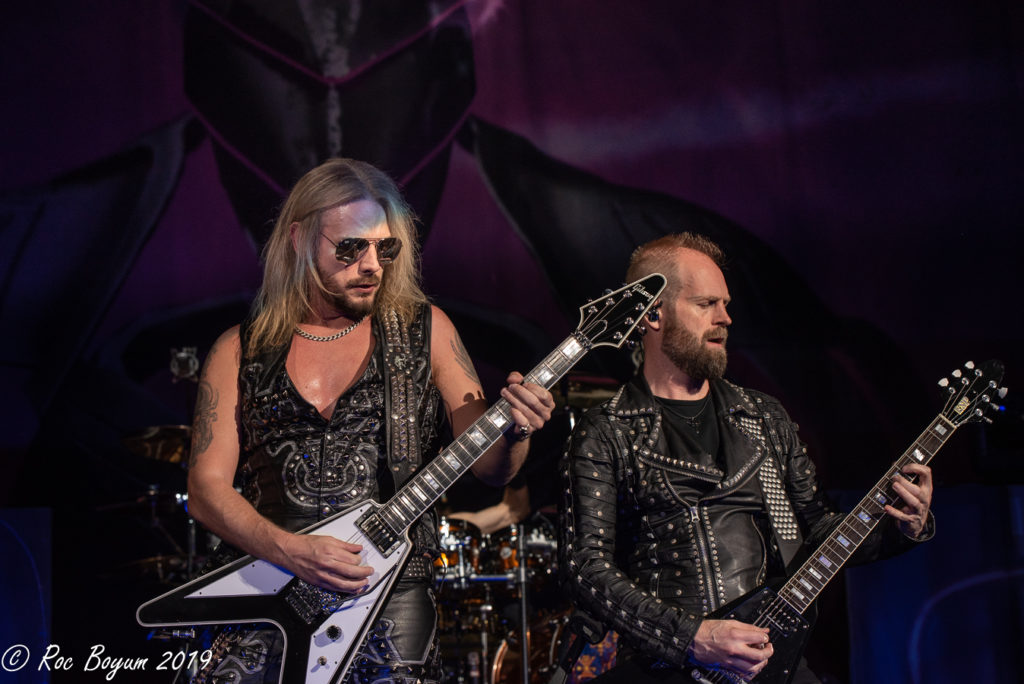 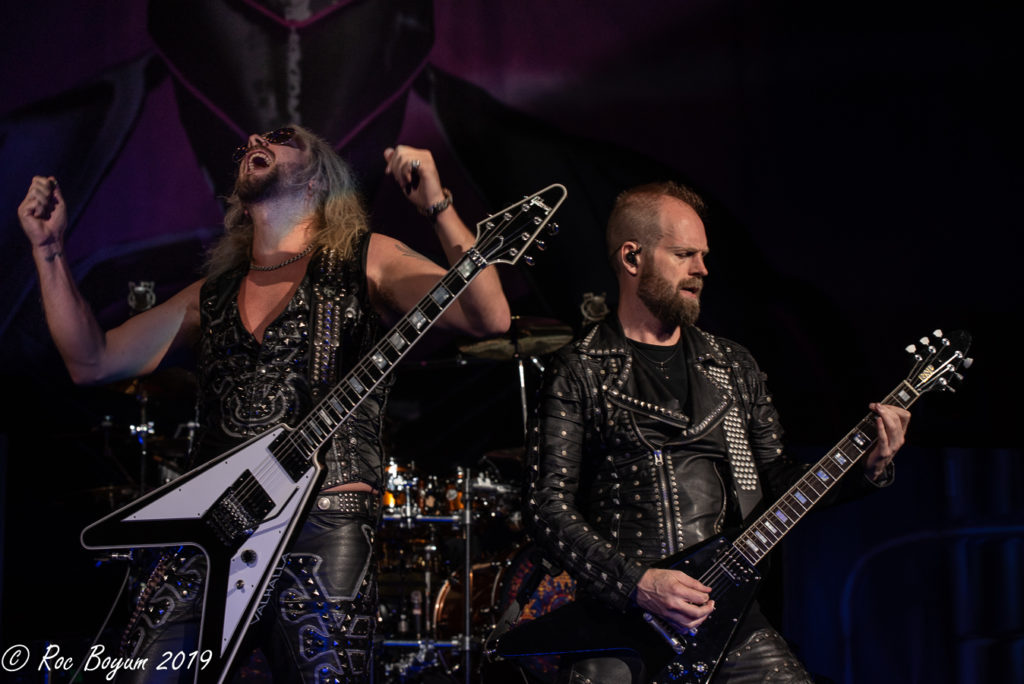 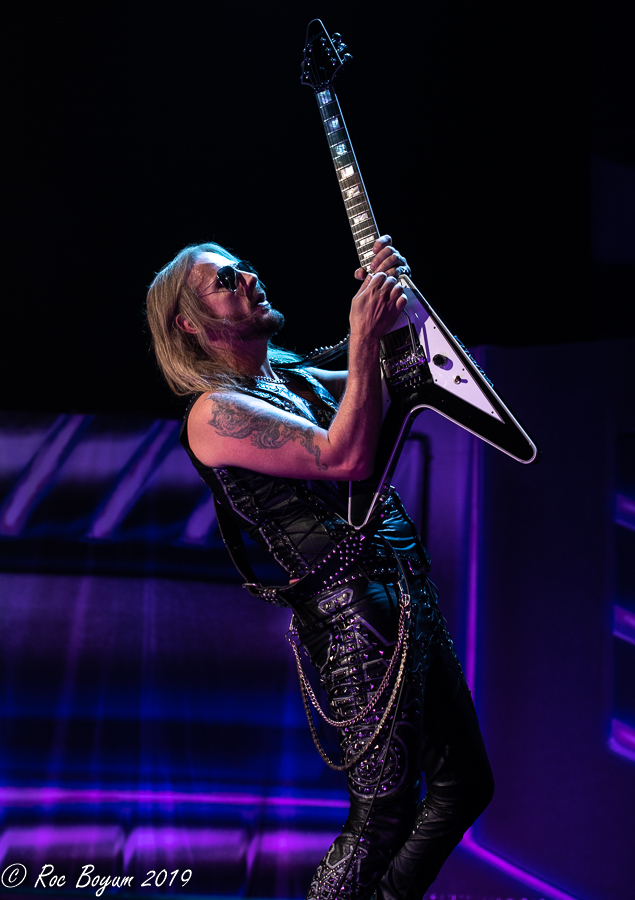 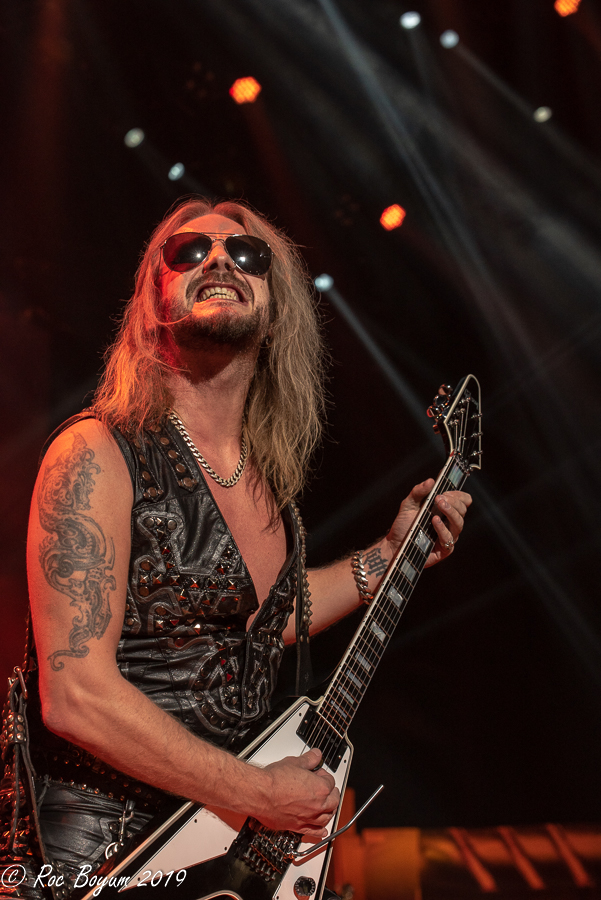 Behind all the flamboyance of the men out front, Ian Hill and Scott Travis deliver their relentless driving force with the right mixture of head crushing power, unwavering mechanized perfection and entertainment. 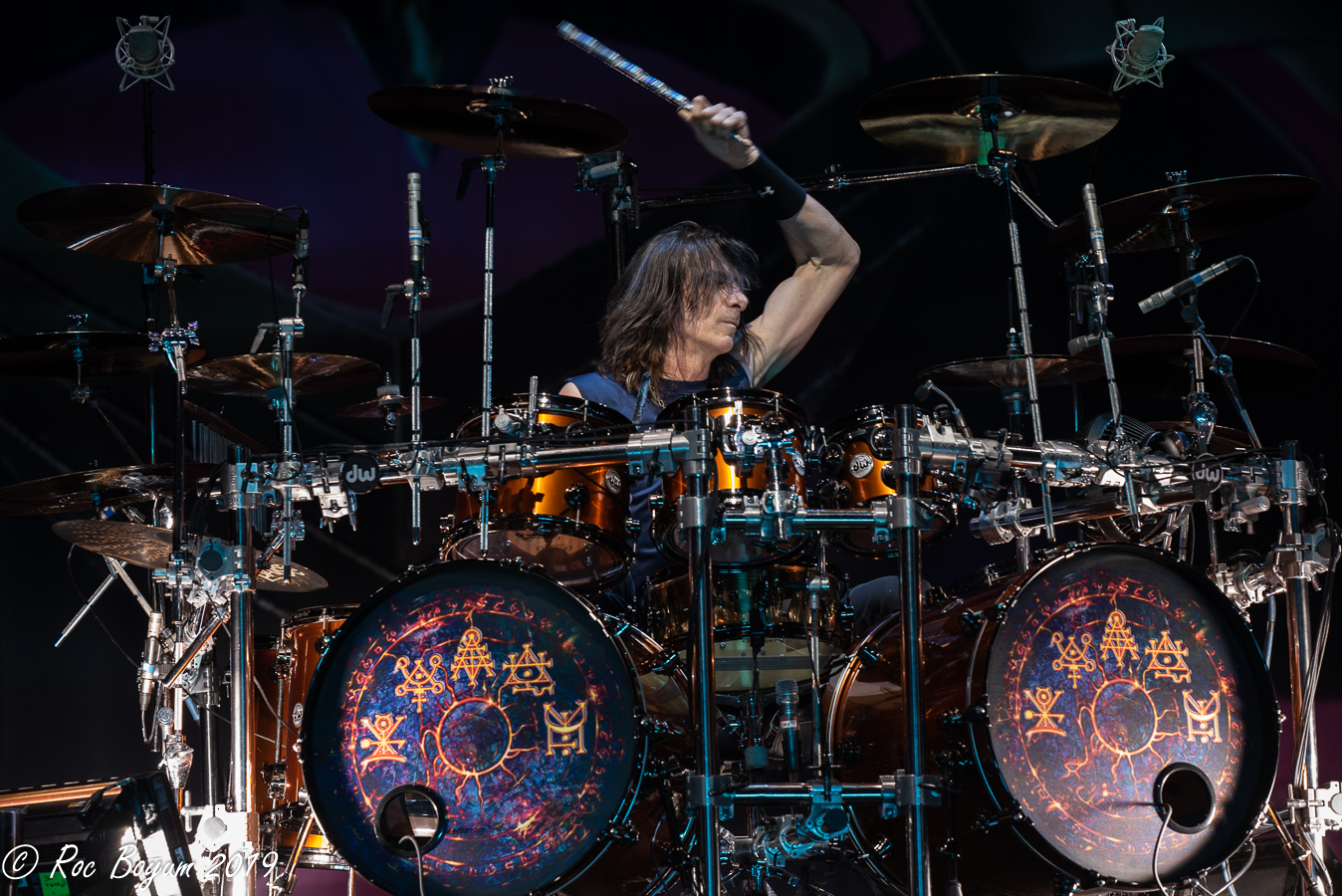 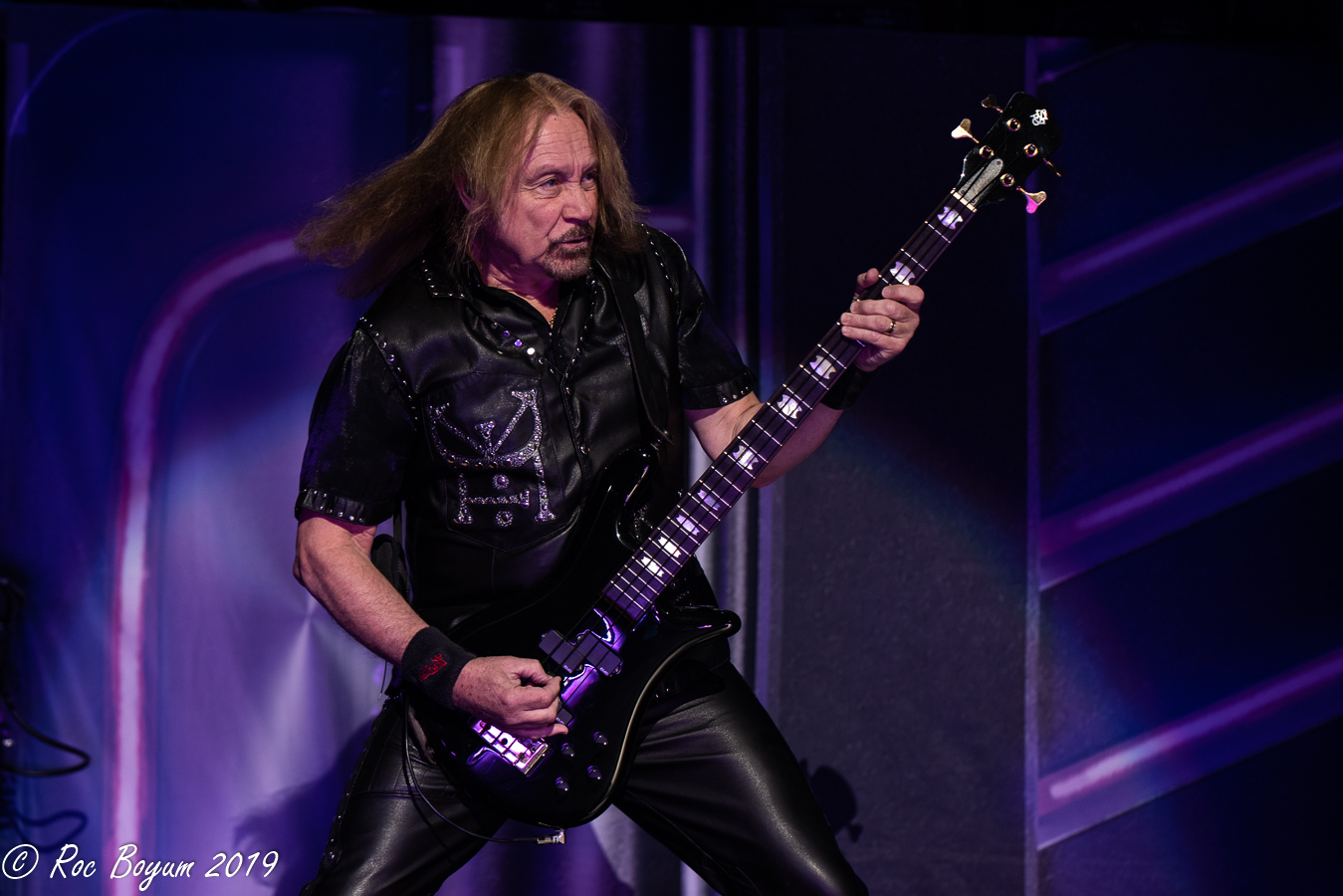 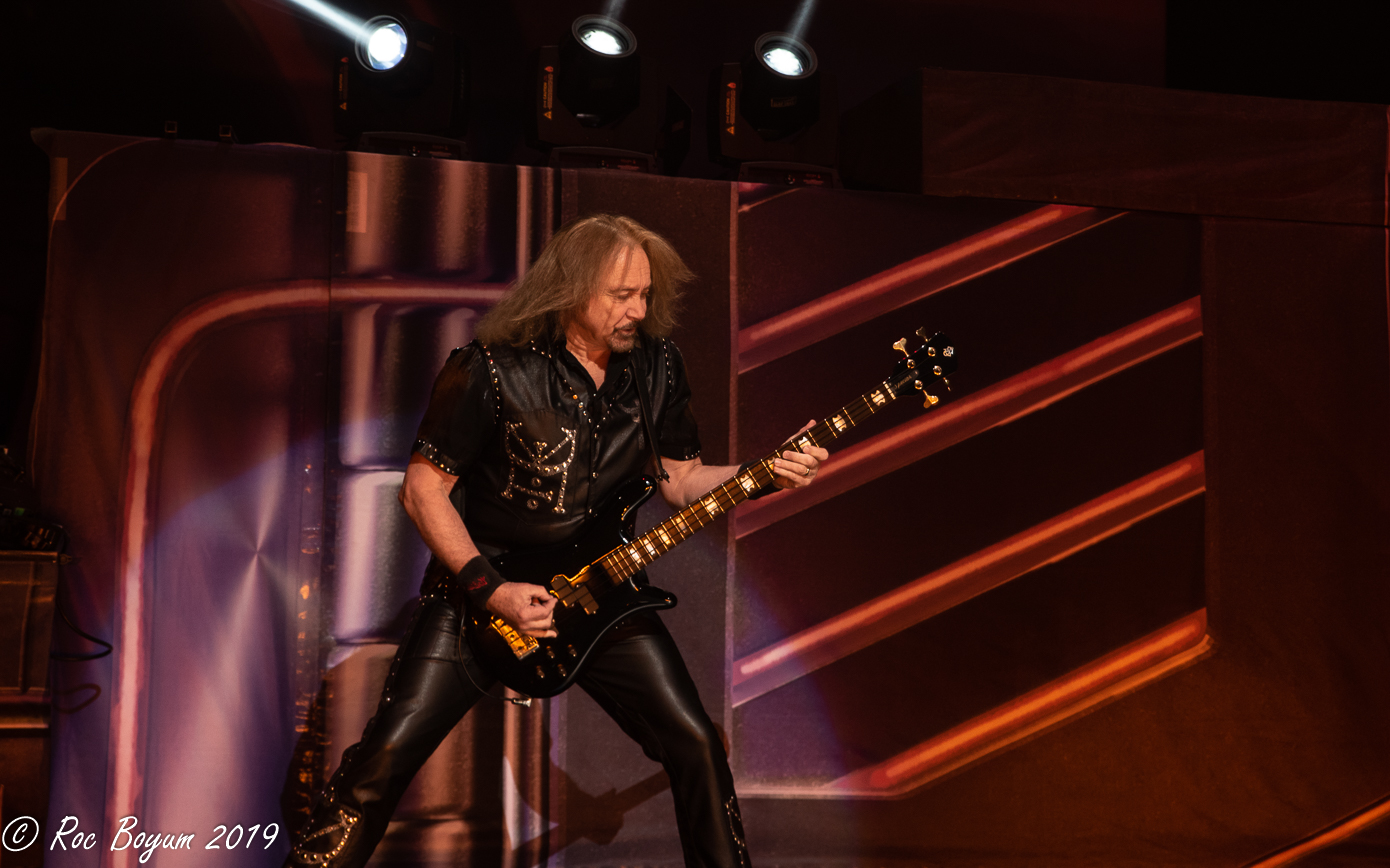 The mighty Priest really set this tour apart from previous outings with songs like (Take These) Chains, Traitor’s Gate,  Starbreaker, and from their 1976 second LP, Sad Wings Of Destiny, Tyrant and Victim of Changes.

The encore songs were of course, a mini set of genera defining fan favs, that even the most casual fan could sing a long to. The first encore track was Hell Bent for Leather, a song that had Halford appropriately shrouded in leather as he arrived on stage, revving his Harley Davidson motorcycle. Two stellar 80’s masterpiece tracks followed with, Breaking the Law and Living After Midnight. The latter song, became the credo of every Hard Rock Rocking Metal Head, for many a generation, and continues to live on to this day!

For his final words of the evening, Halford left the audience with this fitting statement…WE ARE… JUDAS FUCKING PRIEST!

Heading Out to the Highway

Out in the Cold