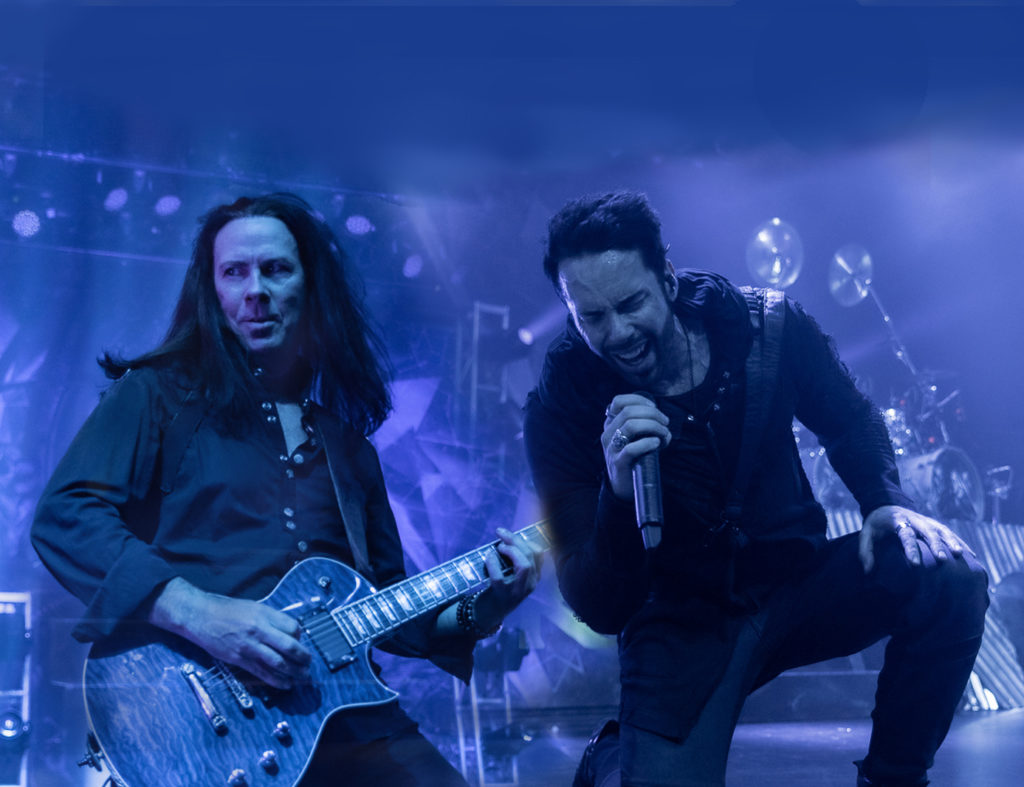 With the long awaited arrival of Kamelot to the City National Grove in Anaheim, eager fans with VIP Meet & Greet passes lined up early. The first of the enthusiastic Meet & Greet attendees arrived at 10 am, with many more arriving shortly after noon. The anticipation for Kamelot was truly high, with the more serious fans arriving in plenty of time to stake their claim in the very front of the line and in prime position to grab the best spot in their respective “GA Tier” .

As the line continued to grow and wrap around the building you could hear the fans talking about previous Kamelot shows, each fan sharing their own story, adding to the mounting excitement that would ignite this truly spectacular night. 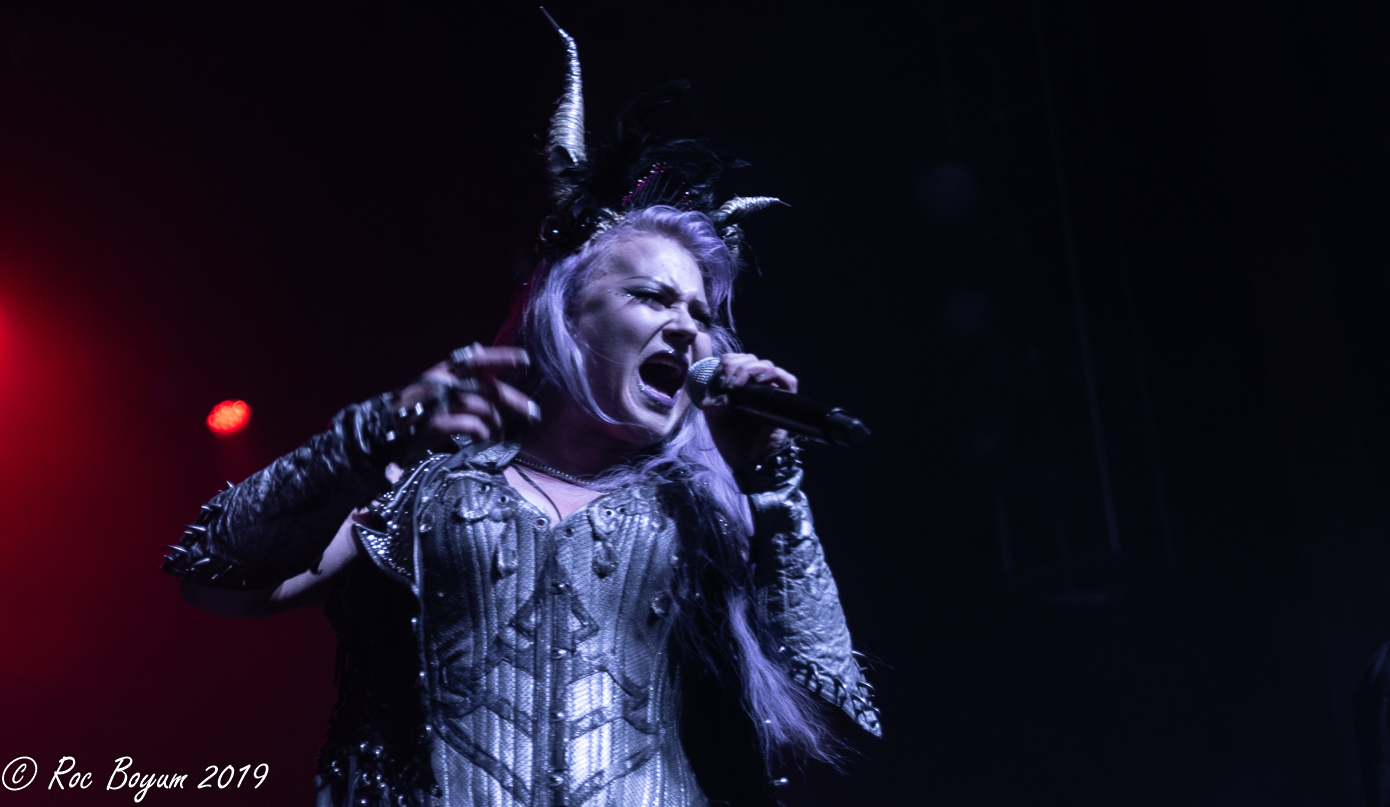 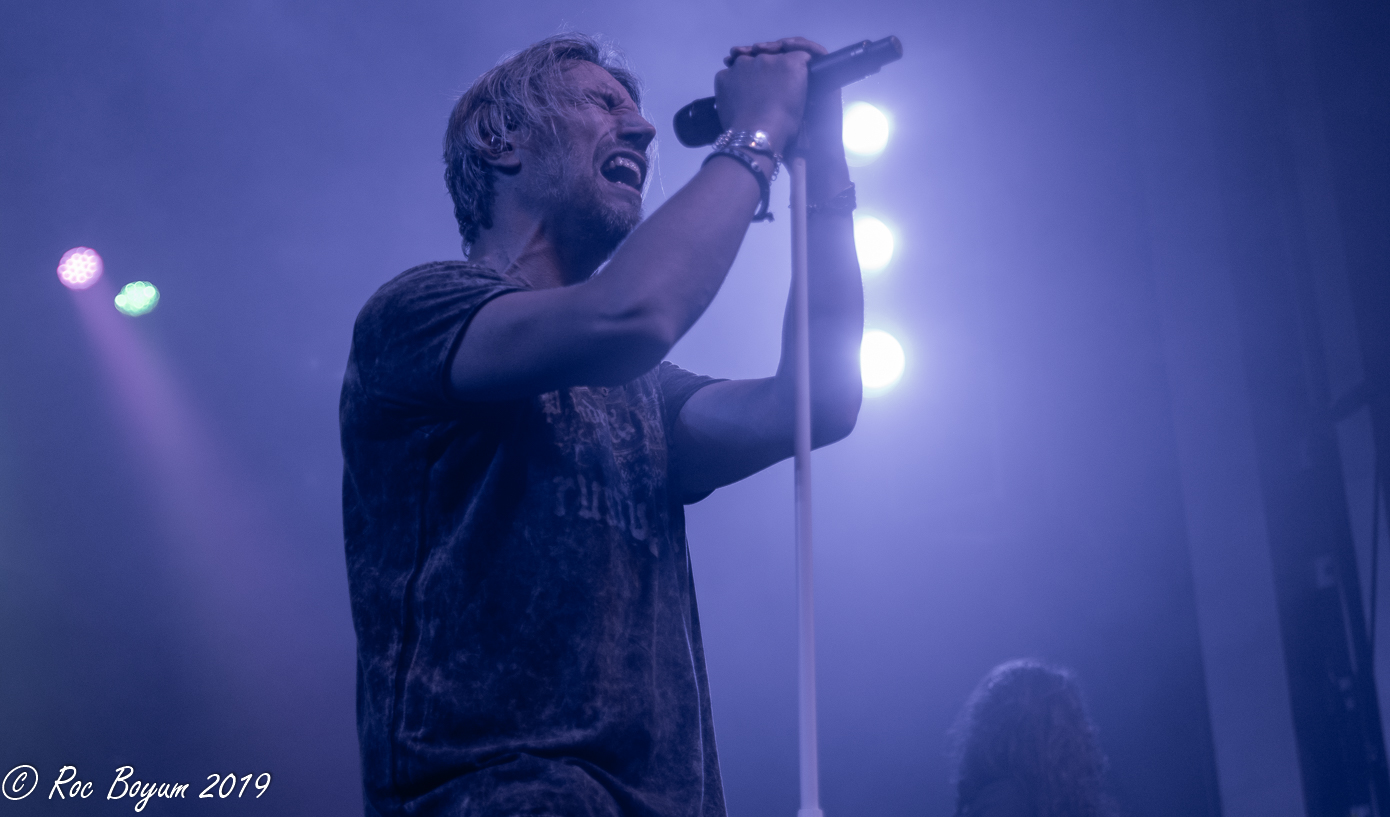 As the stage was being set for Kamelot, you could almost hear an eerie silence as the fans seemed to be holding their breath in anticipation. Suddenly from the total darkness with just a glimmer of light, Kamelot descended upon the Grove stage, one member at a time under a shroud of smoke and dim blue lighting. Drummer Alex Landenburg entered the stage first to the cheering crowd, followed by Keyboardist Oliver Palotai. The crazy wild man on bass, Sean Tibbetts, ran onto the stage cast in a glow of light. Bathing in a glow of light, Tibbetts jumped onto a riser at the front of the stage; raising his arm to the sky; the crowd roared!  Then all at once, Kamelot’s founding member, Thomas Youngblood appeared with a simultaneous burst of strobe lights and shooting vertical columns of smoke with the band exploding into a feverish version of Phantom Divine with guest artist, Lauren Hart from Once Human. 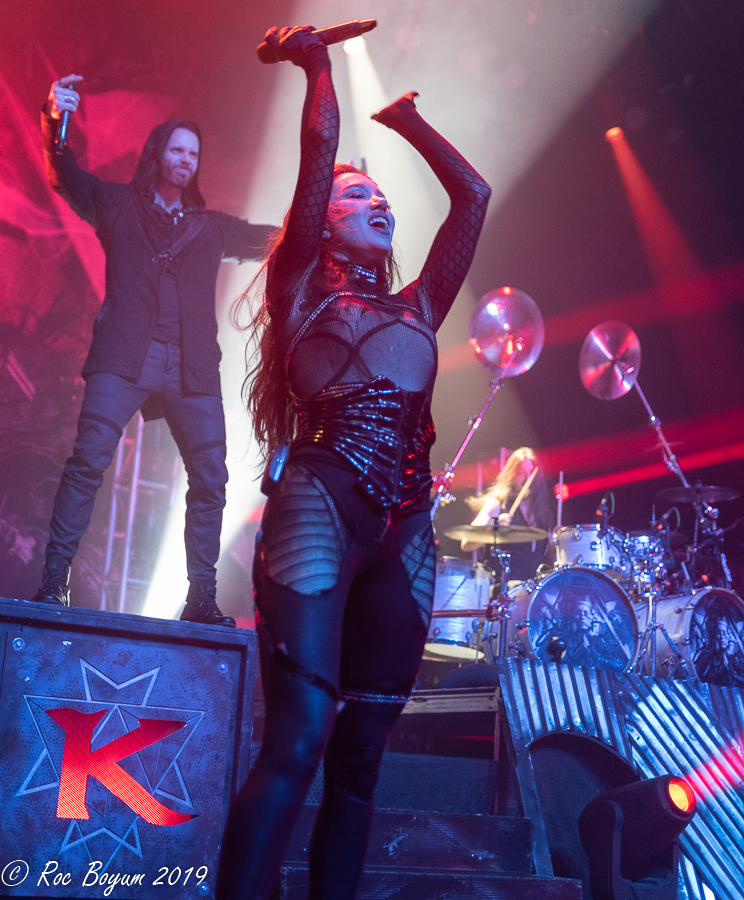 The band tore through a set of fan favorites, representing the LPs, Ghost Opera, Haven, The Shadow Theory, Black Halo and Karma. Some of the fan favorites included Rule the World-2007 (Ghost Opera), and three songs from their 2015 highly acclaimed (Haven) LP with Insomnia, Veil of Elysium, End of Innocence.

Around the middle of the show, Keyboardist Oliver Palotai and Drummer Alex Landenburg remained as sole figures on stage to engage in a keyboard and drum solo exchange. The two master musicians played through several different styles of grooves, with each groove encompassing a progressive element. The grooves included Rock and Latin that featured each musician in a solo spotlight while the other musician accompanied with his supportive groove.

At one point, drummer Landenburg, played a call and audience answer routine with the audience. Landenburg would exchange drum riffs with the audience, where he would play an insane riff, stop, and then the crowd would cheer; with Palotai’s assistance. He finished his audience interactive solo piece with a barrage of foot and hand combinations that included some serious double bass runs and ridiculous hand over hand cross overs.

For the finale to their epic evening, the band finished the night with songs that included featured guest vocals on the song Sacrimony, which featured Noora Louhimo of Battle Beast, and the last two songs of the night, March of Mephisto and Liar Liar, that featured Lauren Hart of Once Human.

A truly great show and another evening the Kamelot fans will never forget.

When the Lights are Down