Metal shows have finally returned and Lamb of God are back with one the most explosive and heaviest shows out there, complete with pyrotechnics!

The show begins with a black curtain drawn down in front of the stage and total darkness throughout the entire venue, you could hear and feel the mounting tension in the venue in anticipation of the arrival of Lamb of God. Then, in a white light on the black curtain, the Lamb of God logo appeared that immediately sparked a loud unified chant that rang out…Lamb..of..God…. Lamb..of..God….Lamb..of..God….   A low rumble came over the PA system that reverberated throughout the venue signaling the beginning of Memento Mori. As in the Memento Mori video, a blue light was cast from behind the curtain that encased singer Randy Blythe as a dark silhouetted shadowy character…as this character, he delivered his monotone beginning about a song that warns us all of the dangers of existing online,  “living in a digitally filtered representation of reality.”

With a mighty blasting sound, the curtain dropped and the intense explosive energy of Lamb of God was unleashed. It’s this energy that can only be found at a metal show that can turn a body of people into a collective mass of wild seething fans that are relentless in their kinetic energy exchange with that band. 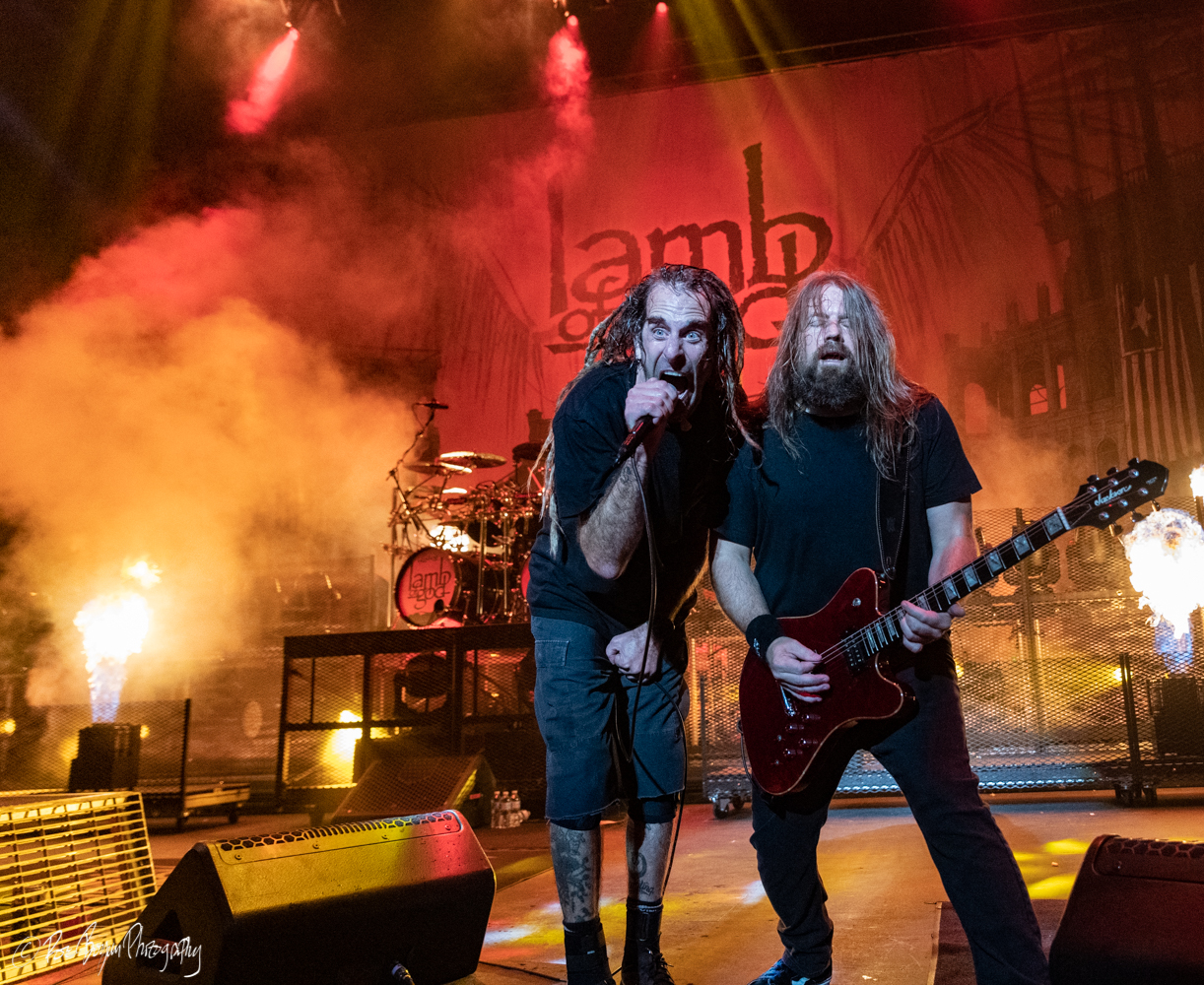 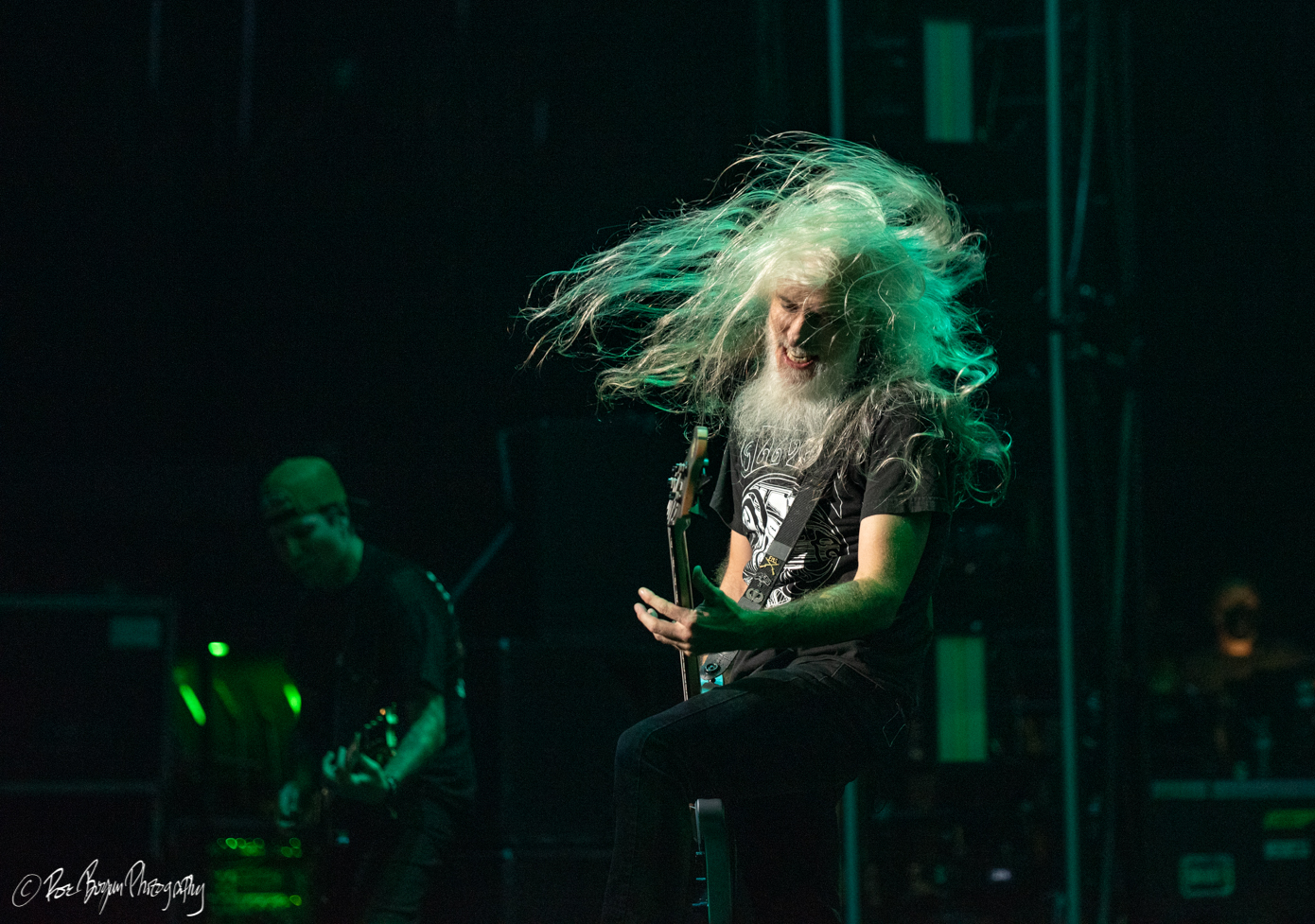 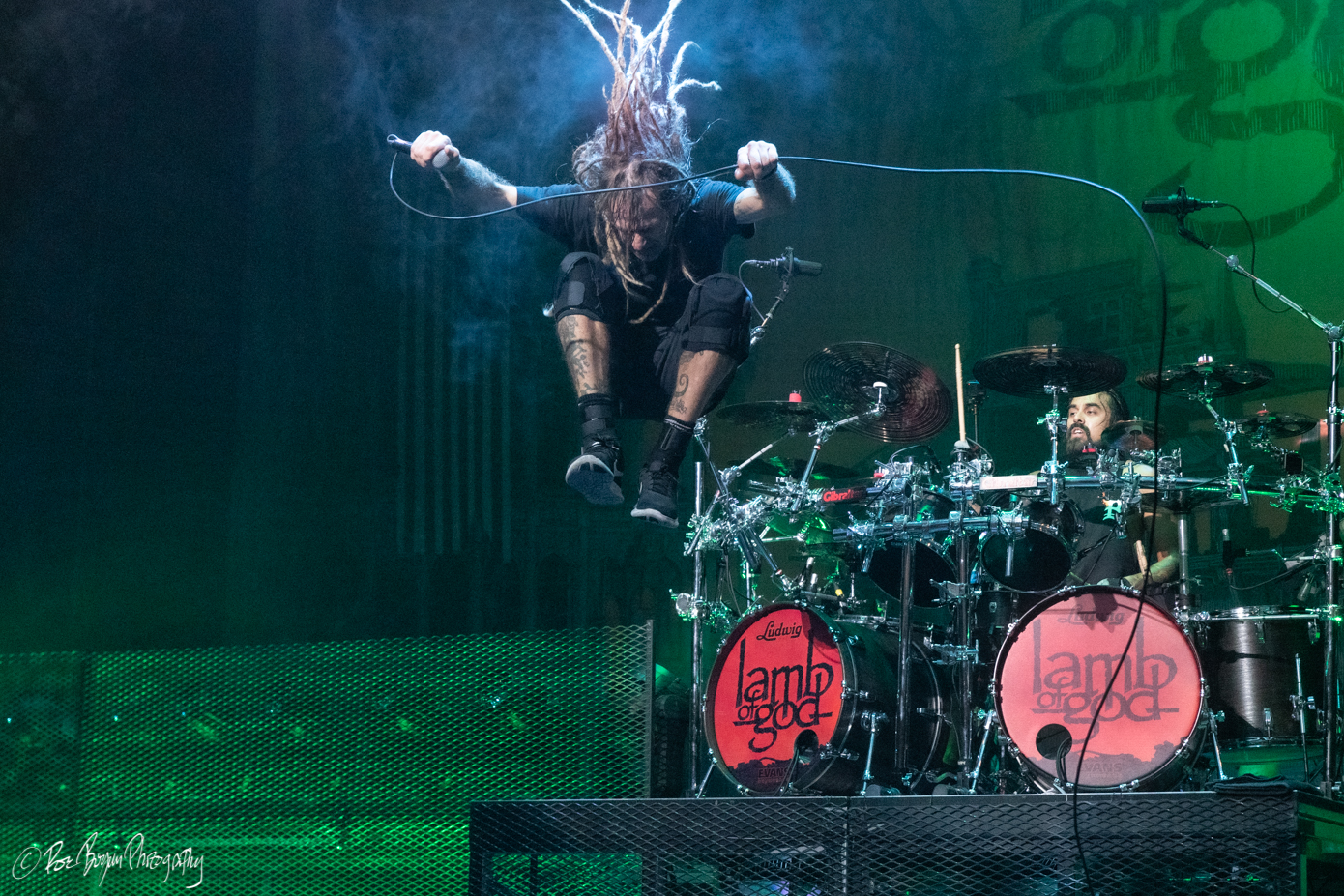 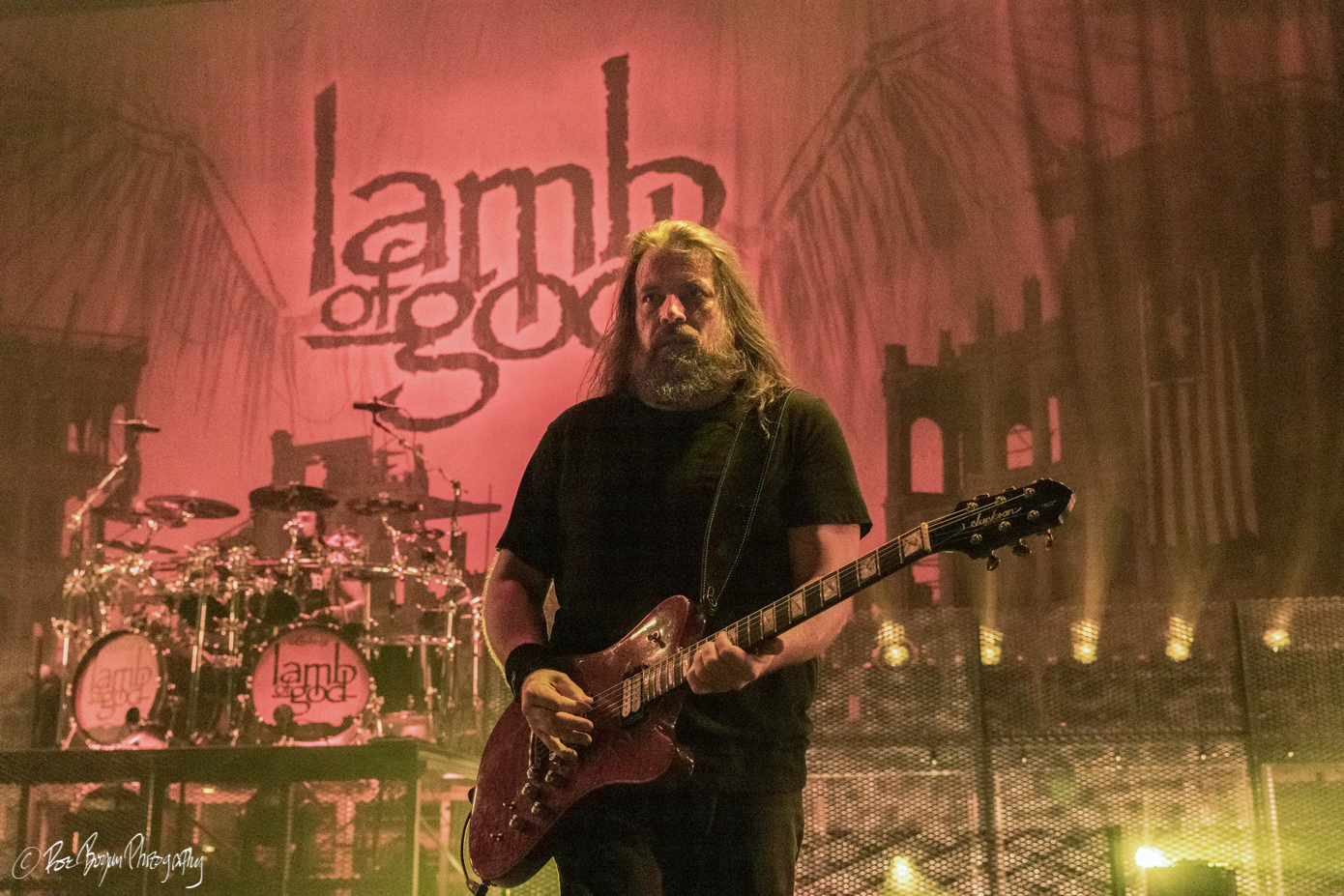 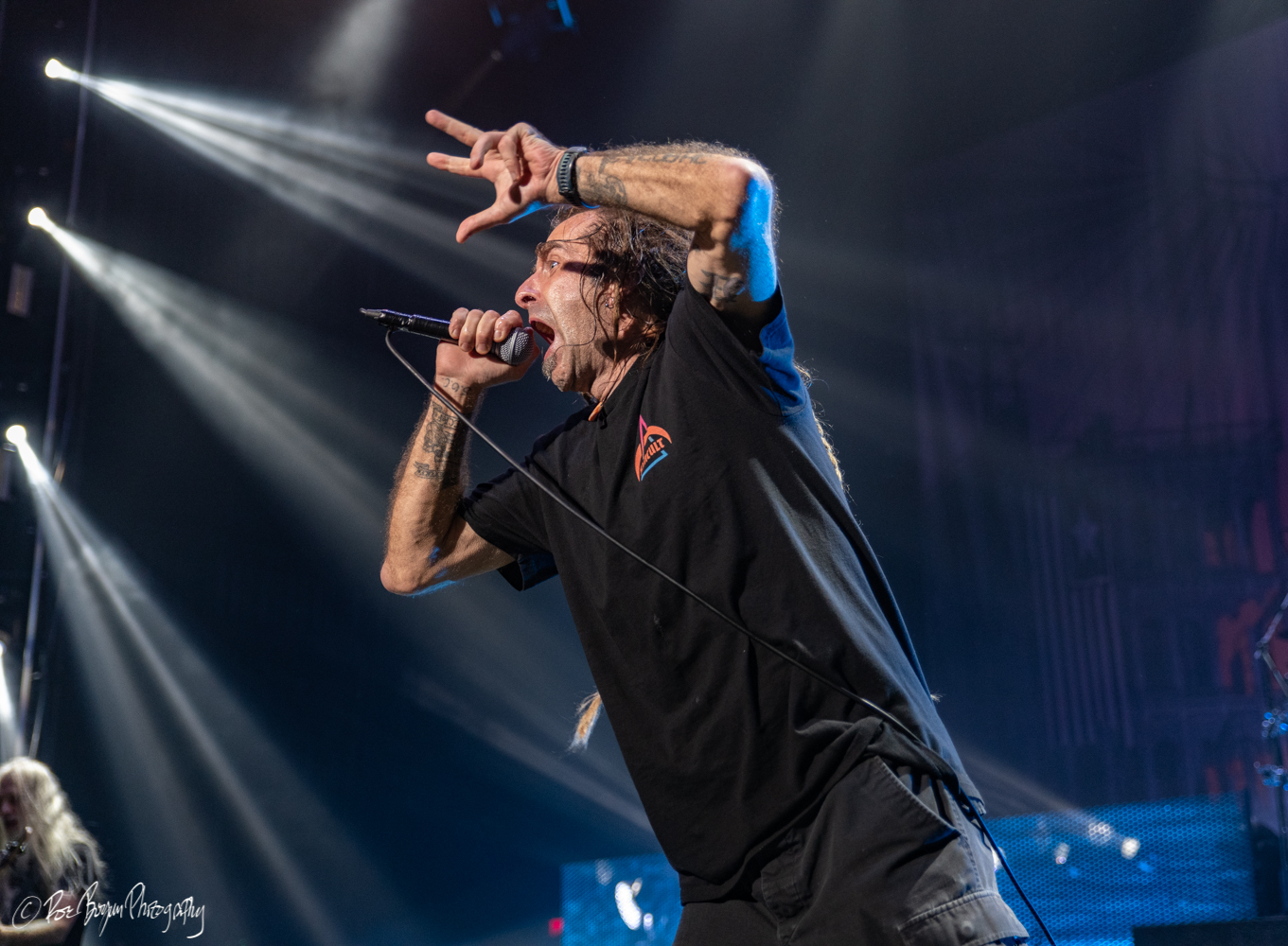 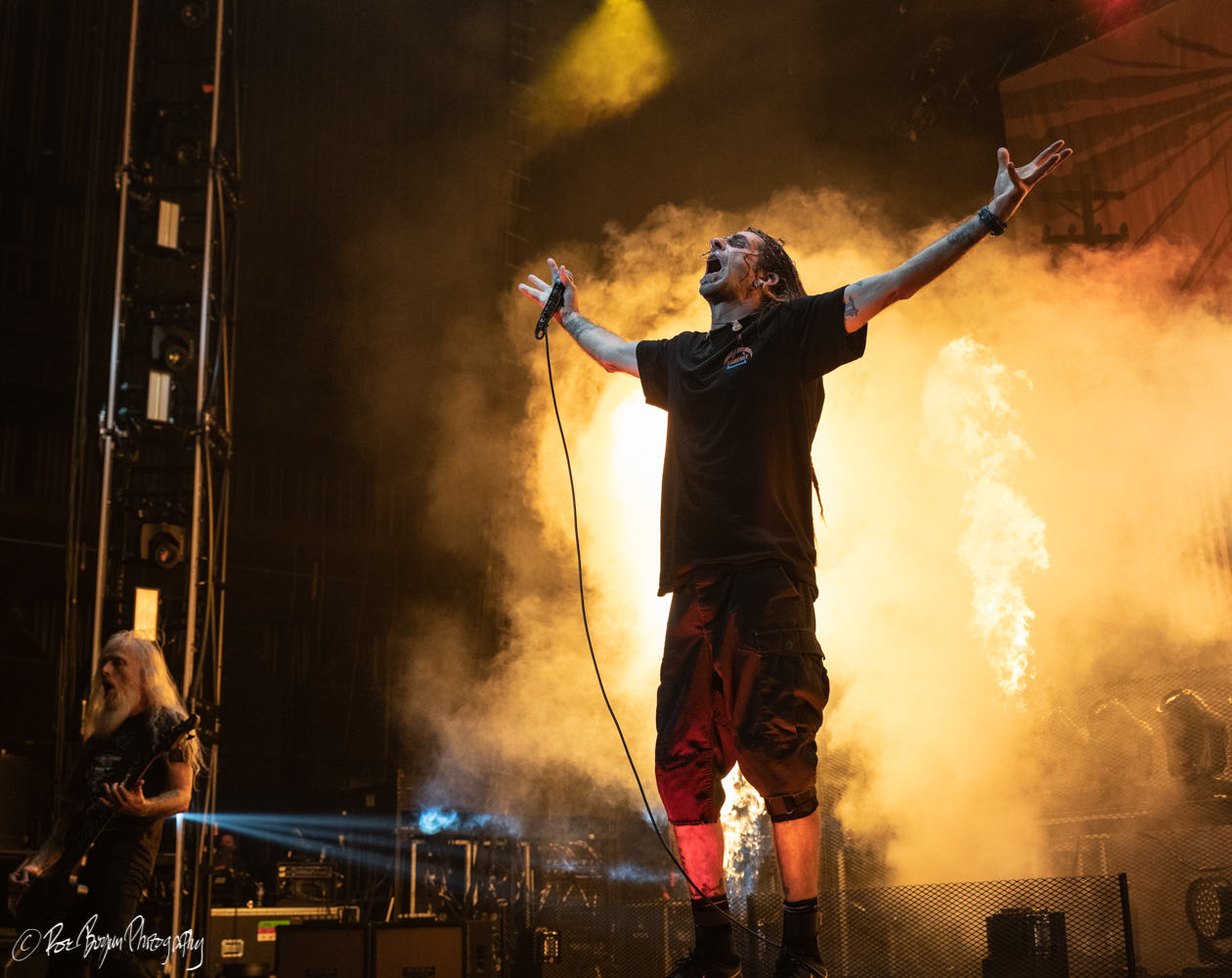 Singer Randy Blythe then introduced the next song Ruin by imparting these words,    “This song is for the people of New Orleans, Keep them in your thoughts right now!” During the song, Blythe shouted to the crowd, “throw your horns in the air”, and in every direction around you, all you could see were thousands of horn thrust hands held up high in the air; metal shows are back and what a beautiful sight indeed!

The song, Walk With Me In Hell appropriately started with columns of smoke shooting into the air from the stage that further ignited the crowd and drove the ensuing circle pit on the floor. This was the first song that definitely had the entire audience singing along.

Next were Resurrection Man and Now You’ve Got Something to Die For! The introduction to the latter song contained the statement; “We return to Phoenix Arizona to do one thing as always, we come to do this, we come to Fuck this place up!!! Are you ready Phoenix to have a good time!!! Which sent the already frenzied Phoenix crowd into greater hysteria! Great fun indeed!!!

Their set continued with the fan favorites of; Set To Fail, New Colossal Hate, Virgil, Contractor and Laid to Rest before their last song of the night; Redneck

For Redneck, Blythe called for (as he stated): “the biggest goddamn circle pit of the evening”, He then said; “Wait a minute – First – Who here has never been to a heavy metal show?…….Everybody…. welcome these mother fuckers! This song is for you people, it’s your first fucking show!”

The pit raged on, the surfers surfed and the horns were high in the air for Lamb of God who hit the AZ Federal Theater with a seismic force that was off the scale. The song finished with a fiery explosion on stage; then the venue echoed with Blythe and the audience engaging in a “Yelling hoot” call and answer back and forth!

As the show came to a close, Blythe looked out over the Phoenix crowd and said these parting words: “Fuck yeah Phoenix, thank you!”

Whether you’re a casual metal fan, a hard core thrasher in the pit, or especially if you’ve never attended a metal show before, this is one metal show you absolutely must see to believe and can not miss!

Check out everything Lamb of God Here!

Walk With Me In Hell

Now You’ve Got Something To Die For