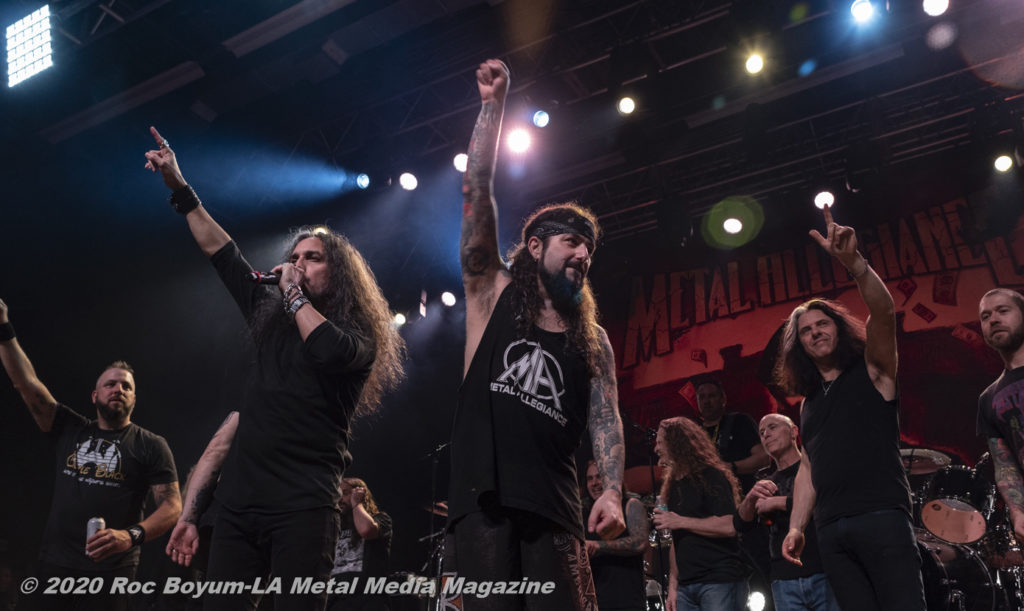 Metal Allegiance, are an alliance of many of today’s top metal musicians that come together to play some of the best metal music ever recorded and assault each audience with a super charged metal performance; but don’t call them a “Super Group.”

On this night, the show was kicked off by WWE Superstar, Erick Rowan as the event’s MC and when Metal Allegiance hit the stage, they blew the roof off the House of Blues (HOB) in Anaheim.

The show had more highlights than one can express in a single article but some of those highlights included; the moment when Testament singer Chuck Billy encouraged the crowd to further ignite the already raging circle pit, which of course incited a crowd surfing frenzy. The crowd surfers were carried across the HOB floor and eventually made their way to the front of the stage and then dumped into the photography pit. Those surfers who were lucky, were dumped onto the backs of the not so lucky photographers as a cushion, and those who were not so lucky, were simply sent crashing to the concrete floor, which is nothing that a few more drinks can’t temporarily fix; great fun indeed!.

Another point of entertainment was when singer Bobby Blitz taunted the audience for their mediocre response to the Band’s kickass performance of the Judas Priest classic Exciter, and the fact that Bobby Blitz took a non-injury fall, as he stepped off his monitor. Blitz’ taunt was something to the effect of:

How you Motherf..kers doing? (with a mediocre crowd response, he railed):

I want you Motherf…kers to make some noise, I just broke a hip!

The crowd then ignited into a cheer that was a more fitting response for the kickass job Blitz and co. just unleashed on the HOB.

A particular high point in the show was when Drummer Mike Portnoy and the whole band paid a fitting tribute to Rush and one of the greatest progressive rock drummers of all time, Neil Peart aka The Professor with their rendition of the Rush classic Tom Sawyer. 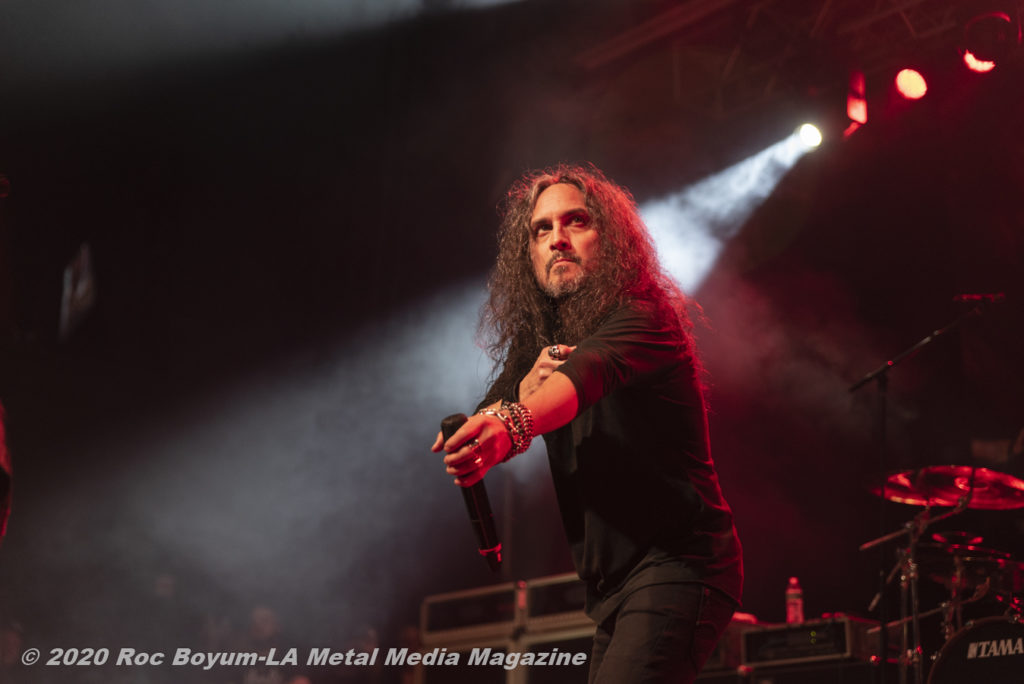 The band ripped into their scorching Rush tribute with Alex Skonlick taking on the Geddy Lee Keyboard lines. In the instrumental section that leads up to one of the most renowned and emulated drum breaks ever recorded, Skolnick was is joined by guitarist Jeff Loomis to help create that incredible y and thick and signature sound that Lee and Lifeson produce live. Guitarist David Davidson took on the Lifeson lead parts during this section but unfortunately Davidson was either turned down or just drowned out by the dominating guitars of Skolnick and Loomis. Of course, drummer Portnoy tore up the world-famous drum fills that Neil Peart cemented in the annals of rock music on Rush’s Moving Pictures LP. At the song’s conclusion, Portnoy raised his arms to the sky in a way of honoring Peart, and perhaps to say thanks to his dear and longtime friend for everything he has contributed to the world; not only as a drummer and drum composer, but also as a musician, lyricist, and prose writer, and most importantly but as an incredible human being. 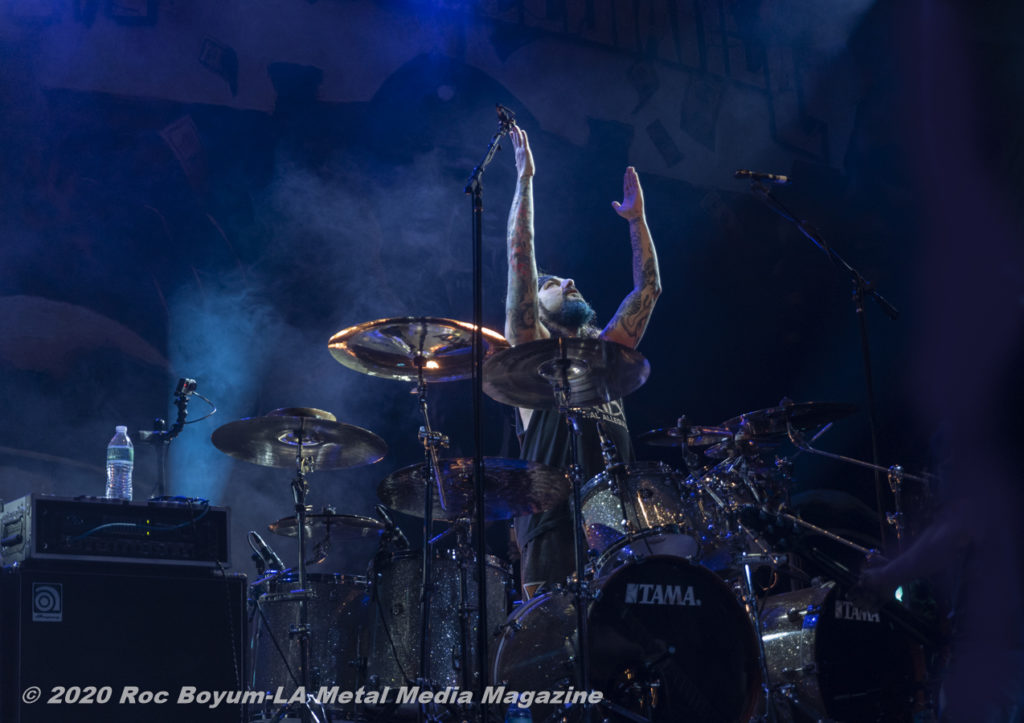 As a lyricist, Neil Peart was considered one of the greatest of all time. Particularly in the later years of Rush’s material the with lyrics that were concise yet highly descriptive. If any of Peart’s lyrics were self-reflective in nature, perhaps the one single line in Rush’s The Garden from their Clockwork Angles LP, says it all and sums up the way he lived his life;

The fundamental foundation principals of love and respect are the values by which Peart lived and had cultivated throughout his life. ;   and These are the qualities that have endeared him to people around the world and prompted the continued outpouring of love and support that he deserves. Peart has meant so much to so many people the world over, and was such an incredible addition to the humanity. race. All of the lives that he has touched have been truly enriched with his numerous and immense contributions; on and off the drum set.

Living by the measure of love and respect are values that would indeed make a better world for all of us.We are all feeling this deep and unmeasurable loss; we all miss him beyond expression, NP rest in peace.

The night concluded with everyone (the entire cast of Metal Allegiance) on stage shredding their rendition covers of Iron Maiden’s Running Free and the Motorhead classic, Overkill. As the multi musician band sliced shredded their way through Overkill, the song then ended with a resounding conclusion, with and everyone on stage following drummer Dave Lombardo into the song’s crashing end. Lombardo was not quite ready to let this night end, so as he launched into a doublebass groove at breakneck speed that seemed to defy human speed and endurance. Everyone on stage looked at one another in disbelief, with a WTF expression on their faces, as Lombardo thrashed on. Realizing that the show must go on, drummer Portnoy threw in towel (so to speak) to let drummer Jason Bittner (Overkill) take his chair and finish this evening’s metal carnage with the rest of the band. This was the final assault of the night.

Metal Allegiance is an incredible coalition of the metal community’s most incredible and notable musicians today; a coalition that pays tribute to some of the best metal music ever written.

Be sure to check out this amazing assembly of metal greats if you can whenever they play live. You may not know what metal greats will show up but you will definitely experience an incredible show of some of the greatest metal musicians to assemble on any one stage. 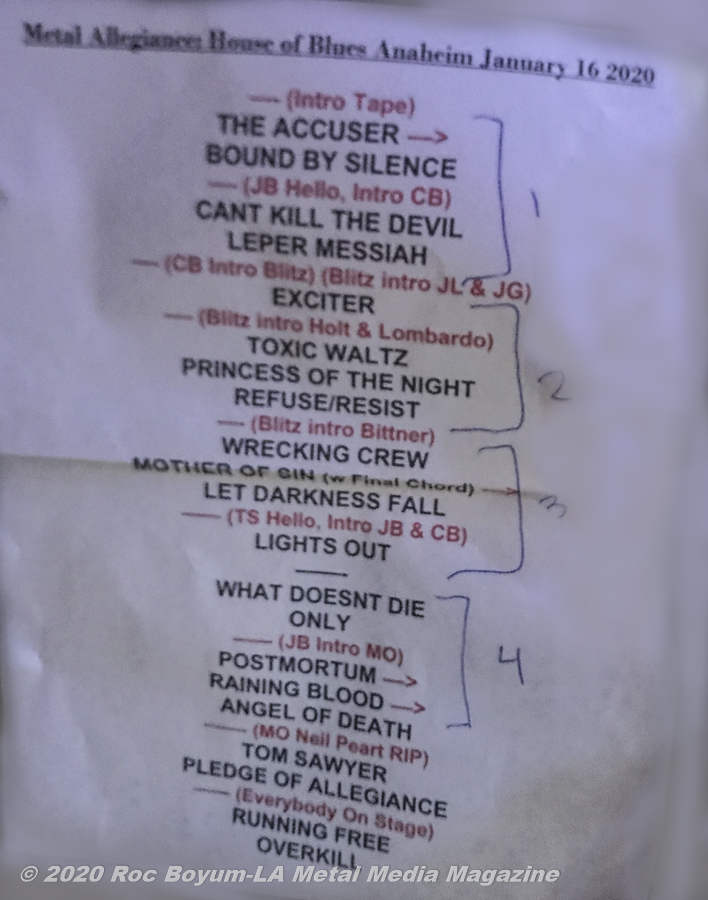