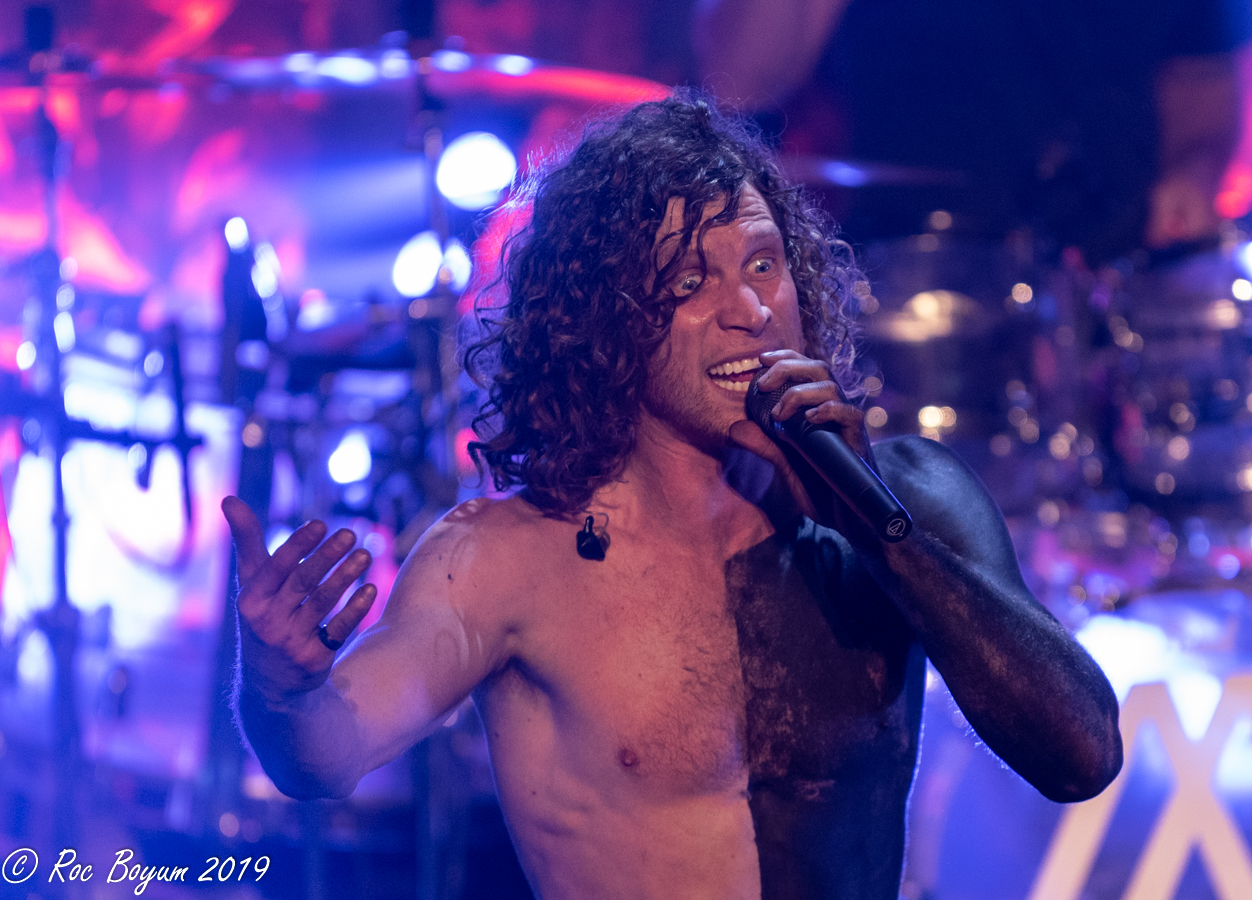 Nothing More Bring Their Headline “Truth” Tour To The Belasco Theater To A Sold Out Crowd That Was As Intense As It Gets!

The night started with a back lit scrim-semi opaque curtain, that was in front of the stage and had the name of this tour “Truth” silhouetted upside down in the center of the curtain. Jonny Hawkins appeared behind the curtain in a silhouette with a can of spray paint, tagging the curtain with the NM logo, as lights started flashing, and a voice echoed across the speakers with the monologue “Convict/Divide” from the Stories LP. Hawkins, still silhouetted behind the curtain, climbed to the top of a single pole ladder that was poised at stage left. From the top of the ladder, Hawkins cranked up an old school air raid siren that reverberated throughout the packed to capacity venue; propagating the crowd’s intensely frenzied anticipation.

Check out this Youtube fan footage of the show beginning posted by Lunik Rosales:

All at once, the curtain dropped and the band exploded onto the stage with an incredible version of Let’em Burn and a sound that was better than I had ever heard the band before; the bottom end was so massively thick and heavy, it shook the entire venue. What better way to start the show than with of Let’em Burn, and the stage/venue appropriately lit up in red that fired up this sold out venue. The audience was so fired up, that the band was blind sided, like a sucker punch to the head, with the entire Los Angeles Crowd singing along so damn loud, it was somewhat overwhelming. Without hesitation the band then went into Christ Copyright from their self titled LP.

Next up was “Don’t Stop” an unmistakable fan favorite about digging deep and never stopping, which was personified by the frenzied audience’s feverish and thunderous sing-a-long.  Hawkins then introduced the 1st of several deep LP cuts off of the “Stories” LP with “Funny Little Creatures”, by simply saying:

I like you LA; We never played this next one live!

Within the first few songs, Hawkins commented that this crowd was so much more intense than the previous night’s crowd (which was in a venue that was twice the size of the Belasco) stating, that he was already worn out. Hawkins, already bathed in heavy perspiration, grabbed a cooling fan from the front of the stage, for a quick blow dry and then pointed the fan at several fans and the security that was standing in front of the stage.

The band continued with their Grammy nominated song, “Go To War” that had Hawkins running the entire length of the stage and from up high on the raised stage behind the drums.

Hawkins introduced “Do You Really Want it” by screaming the song’s title, followed by a simultaneous flash of light and sound. The band’s entrance was like a sonic detonation as they collectively exploded into a song that was known for it’s more subtle guitar beginning. 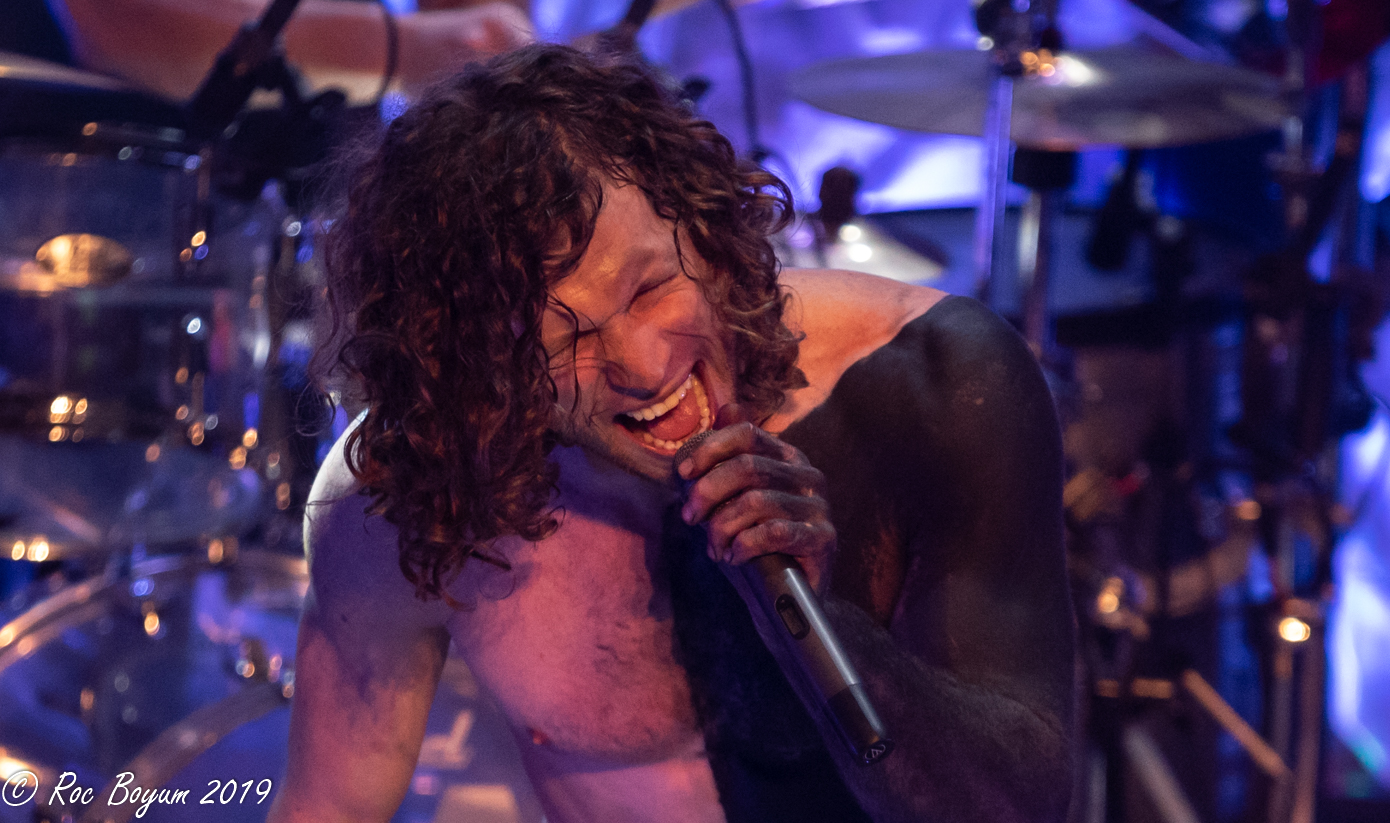 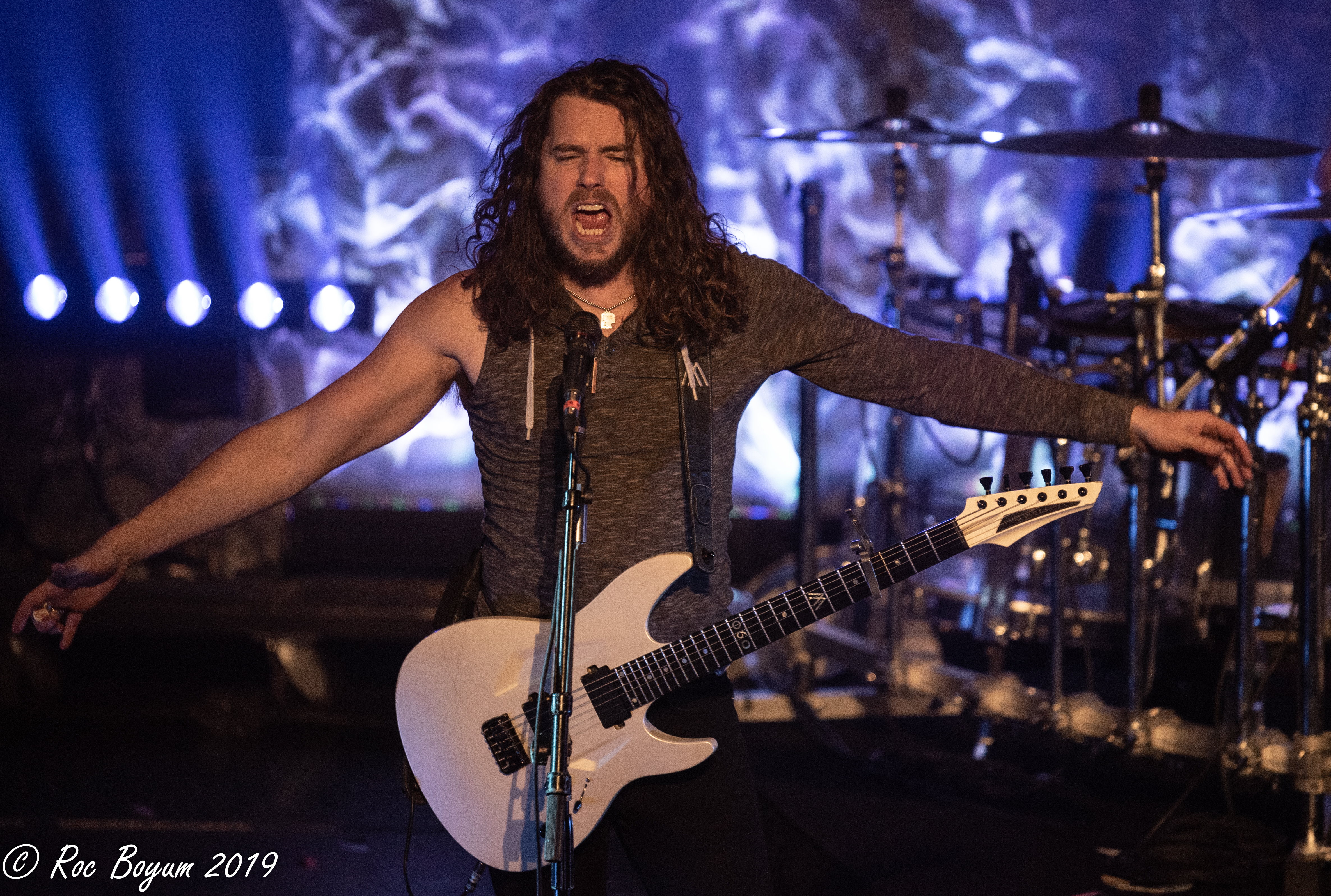 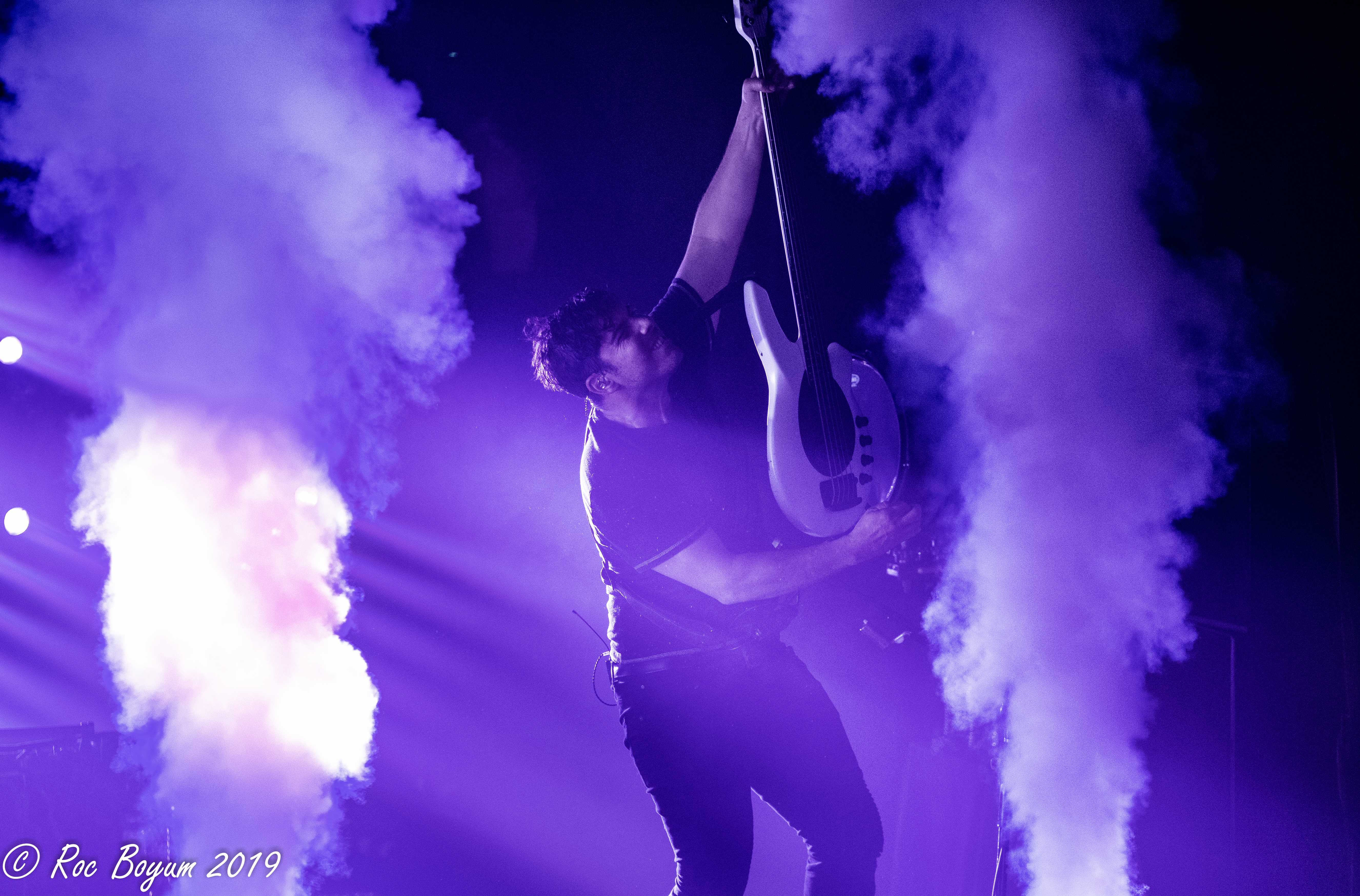 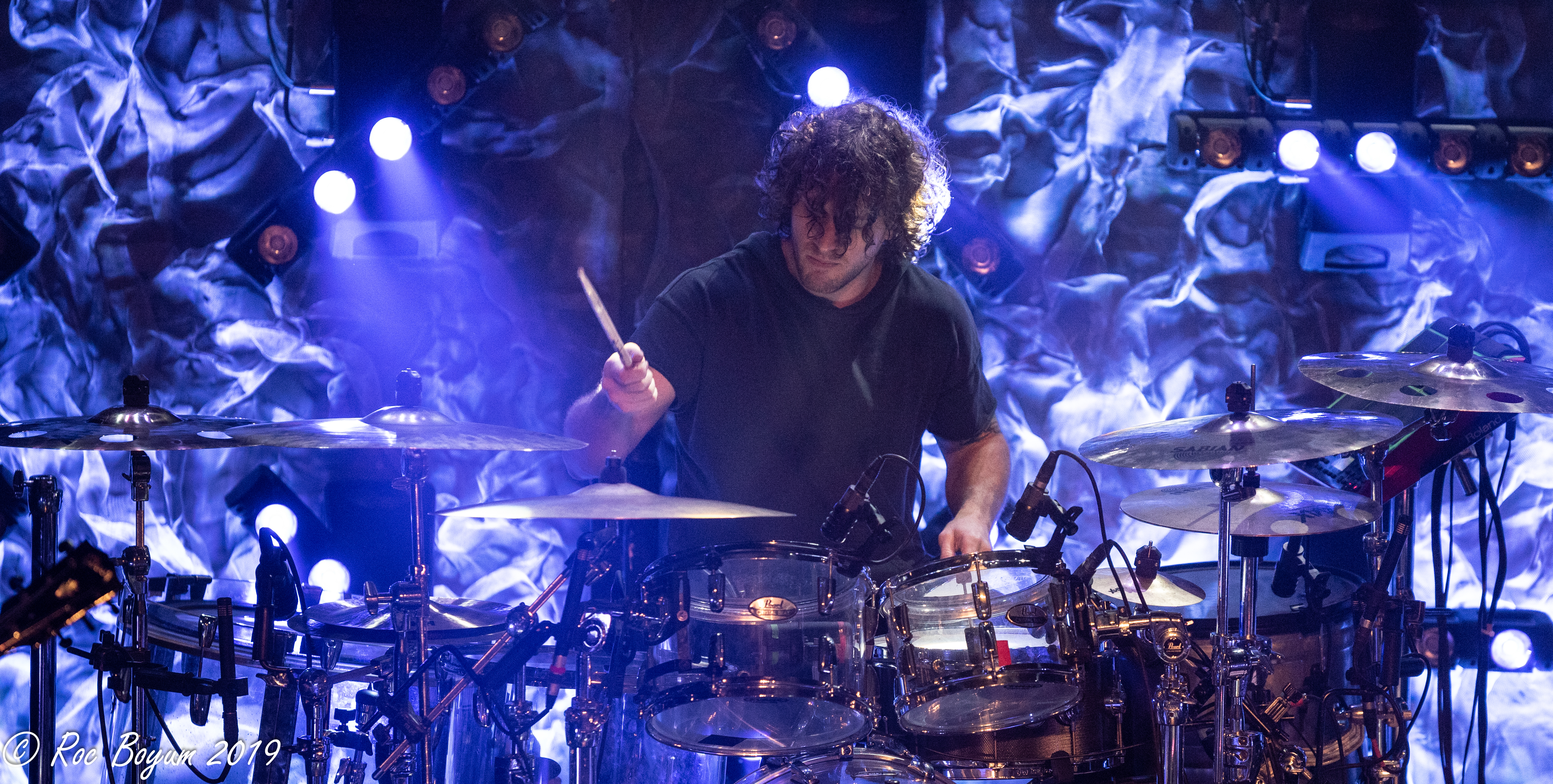 Then the band unleashed two more deep cuts from their “Stories” LP, “The Great Divorce”, a song that is very demanding on drums and drummer Ben Anderson delivered the goods with shredding precision. Nothing More channeled the next song Still in Love with such incredible passion that the entire Los Angeles crowd ignited into a fierce hysteria which included one hell of an audience participation.

From their “official” self titled CD release, came a double shot, with Mr. MTV and Jenny.  Jenny is a song about Hawkins’ sister and Mental Health Awareness, which is also the quintessential epitome of what this tour is all about. The band has done so much over the years to help with the awareness of mental illness and with this “Truth” tour, they continue their cause by donating $1.00 from every ticket on this tour, to a foundation called “To Write Love On her Arms” ; be sure to check out their site. 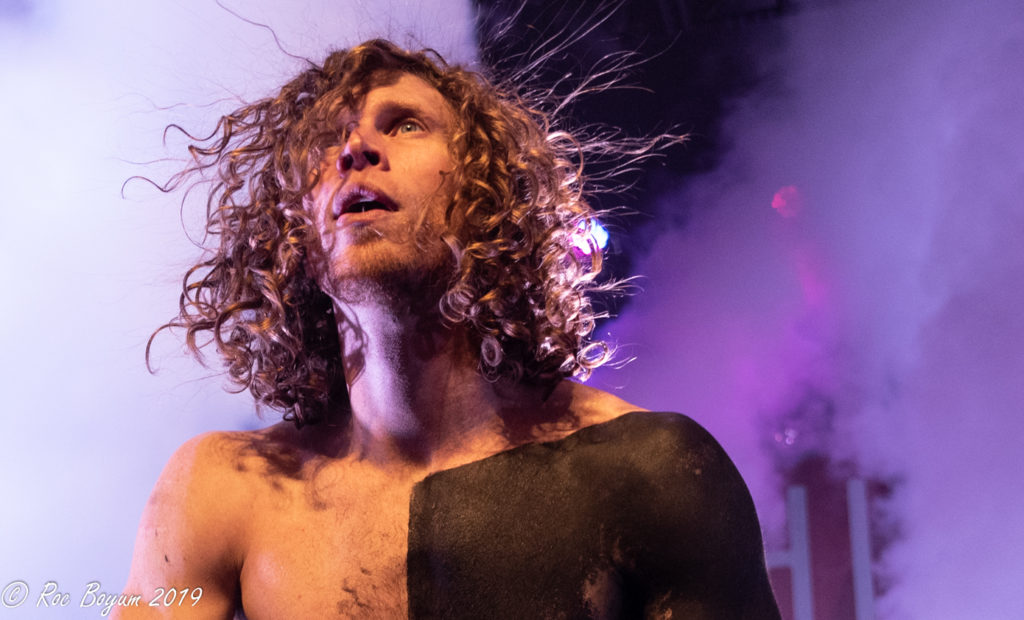 “Tunnels” from their “Stories“ LP was next, a song that needed to be played live to be fully appreciated and was truly an underrated track until now. Guitarist Mark Vollelunga took the verse crunches and made them extra thick, heavy and badass and all those subtle parts at the end of the song that you might have thought were keyboards, were actually all done on guitar which really helped bring this song to life. This was also the last of the “Stories“ LP deep cuts on this show.

The band then presented the emotional Fadein/Fadeout from the “Stories” LP, a song that’s very dear to the band and was introduced with Hawkins stating;

This is a song for anyone who has lost a parent!

Ocean Floor, which is the opening track to their self titled LP, was delivered intimately, with Hawkins sitting on the floor, at the front of the stage and provided the perfect unplugged feel which then quickly changed into a whirlwind of sound and flashing lights as flash pots exploded as Hawkins jumped up to his feet and the band erupted into “This is the Time” from the same LP. Nothing More delivered “This is the Time” with a resounding force, conveying the song’s meaning with resolute conviction.

For their last three songs; a Skrillex cover, a Queen cover and Salem (Burn the Witch) the band cleverly crafted and weaved together excerpts of the two cover songs before diving into “Salem“. The Skrillex cover, “First Time of Year” was delivered from high upon the “Scorpion Tail” an invention crafted by their bass man, Daniel Oliver. Also for the first time live, the band brought forth Queen’s “We Will Rock You” which had the entire Belasco Theater irresistibly stamping their feet, clapping their hands and singing to the song’s praise “We Will Rock You”; a song that will surely go down in the annals of rock music.

The band finished the night with a blistering version “Salem” (Burn the Which), and as usual, the song was prefaced with a statement by Hawkins;

For those of you who don’t know us, we’re a band who does not do encores, why? Cause they’re fake! 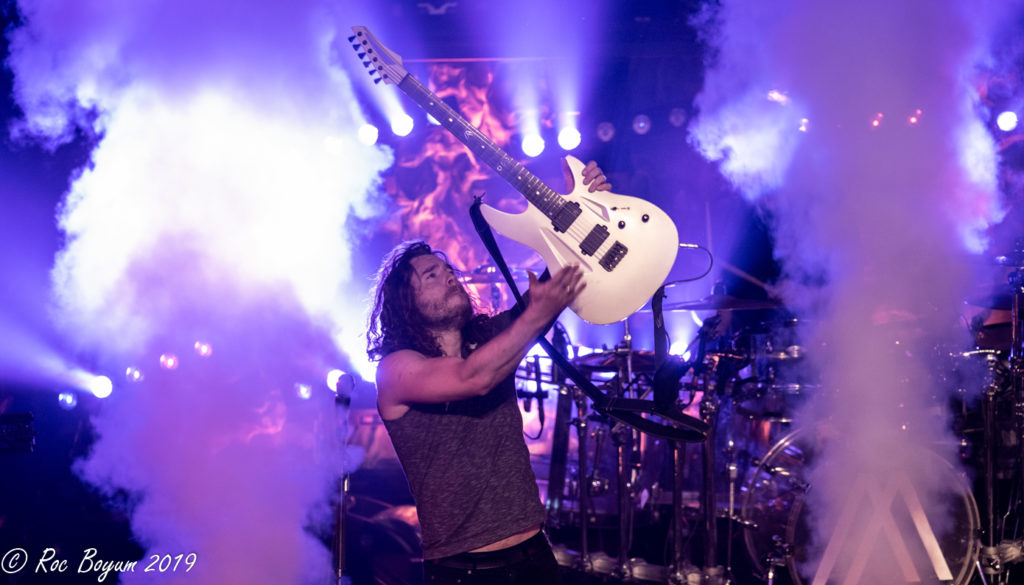 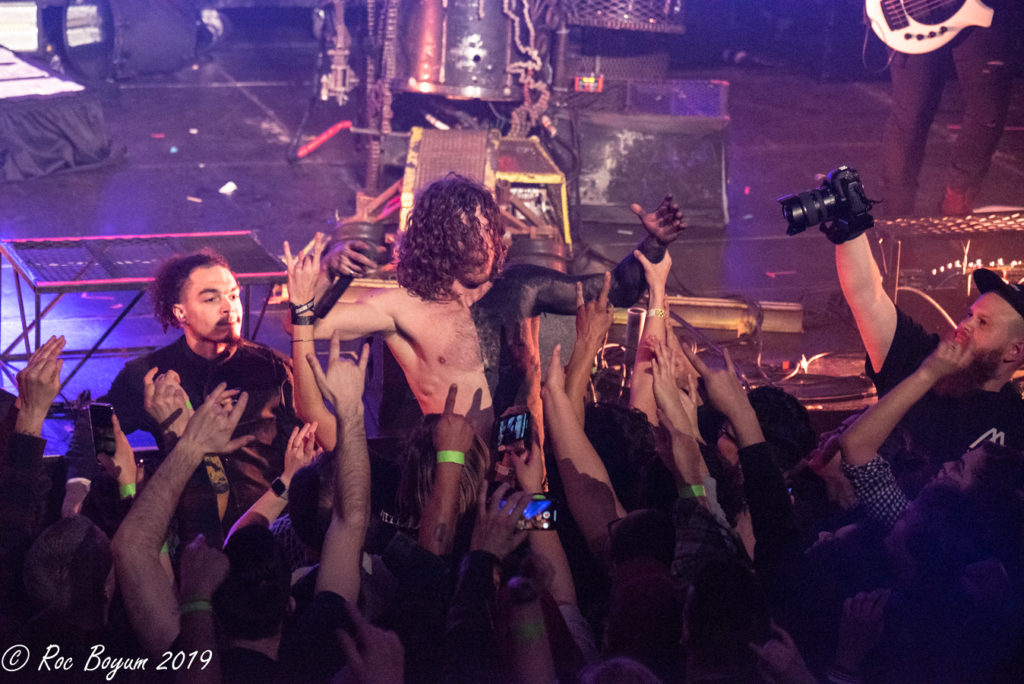 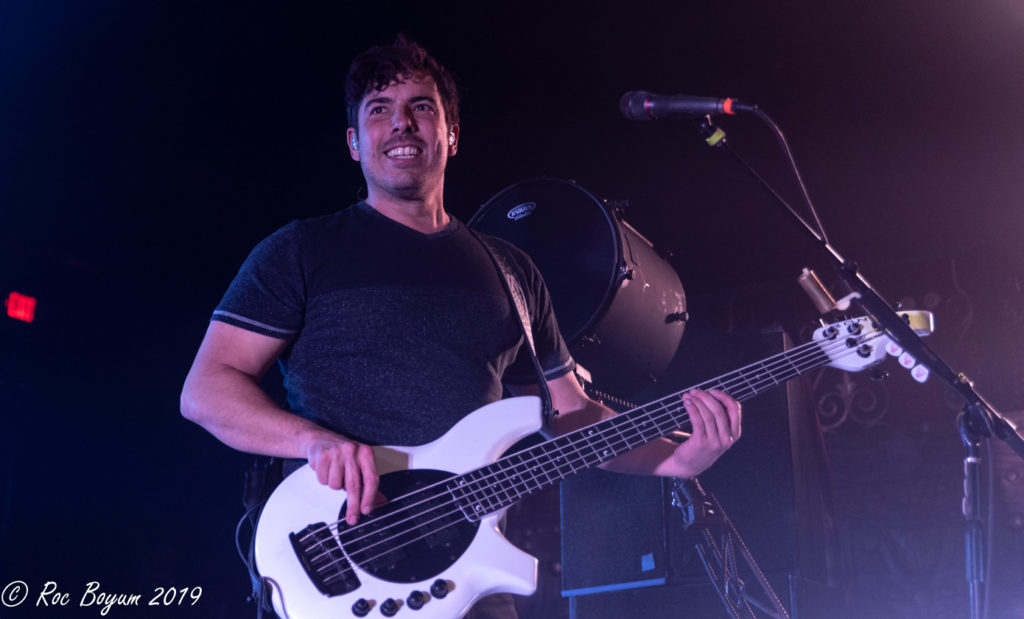 “Salem” always whips the crowd into mania and this night was no exception – with Hawkins leaving the stage towards the end of the song to get into the mix of the frenzied GA crowd on the floor which insured, that for this night, the Belasco got a show that was, way way over the top!

This is the last tour in the states for Nothing More before they embark on the creation of a new LP, so you definitely do not want to miss out on your chance to see these guys this time around; it could be a year or more before they return!.

Check out the Nothing More Belasco Theater Photo Gallery here!

Do You Really Want It?

We Will Rock You-Queen Cover