Nothing More, crushing the obstacles before them; a band that practices what they preach!

On September 13, 2019, Nothing More hit the Rabobank Arena in Bakersfield CA, with the first show of this North American tour in direct support for Ghost. With all the success that Nothing More has garnered thus far in their career, we have been accustomed to seeing Nothing More as a headlining band as opposed as an opening act; but reaching new and different audiences is somewhat of a never-ending process. Nothing More is not just any opening band, in fact they’ve attained three Grammy Nominations for their hit song Go To War, they have gained incredible industry success and they have an insanely devoted fan base. So, how is it possible, that with all this success, they can still come face to face with a pour audio mix, in-ear monitors that don’t work and lighting that is hit and miss at best; as an opening act, there are many things that are simply out of your control!

From their first note, it was immediately apparent that they were going to have to enact the lyrics of their song “Don’t Stop” to overcome the potential array of issues that an opening band can encounter.

The band’s challenges started from the very onset of their show when singer Jonny Hawkins climbed a ladder (a single pole with rungs) to crank up their air raid siren with no light on him what-so-ever. The audience was left without the ability to see Hawkins in action, and, it was surprising that Hawkins didn’t get injured, climbing down a ladder with limited visibility.

Upon Hawkins’ ladder decent, the band immediately launched into a high energy brilliant song from their “Stories” LP, Let’em Burn, with Hawkins barely in any light. The song’s middle section is where Hawkins usually crouches down at the front of the stage to connect with the audience, but on this night due to perhaps the venue size or Hawkins’ inability to hear well, Hawkins simply sat down right in front of the monitors for his delivery. This new move by Hawkins was embraced by the Nothing More fans with their renowned sing-a-long that inspired others to become part of the family. From there, they pulled out a scorching version of Christ Copyright from their 2014 Self Titled LP, before embracing the lyrics to their next song; Don’t Stop. Don’t Stop is a song about tough times and the need to work through whatever issues you may be facing at that given moment; to gaze with reflection and look inside yourself, and as the lyrics state:
Oh, keep on digging deep, keep digging deep, Keep digging, WE DON’T STOP!

As with any headline band that takes on the role of an opening act, it is always possible that many people in the audience may not be familiar with their material, and they have to rely on their past experience and ingenuity to win those fans over. With that said, they pulled out the “Bassinator“, a device that was absent from their previous Headline tour but is an incredible spectacle that definitely gets your attention.  The “Bassinator” segment consists primarily of a three man bass solo and is an invention that was built by the band’s bass player, Daniel Oliver. This solo segment has Drummer Ben Anderson dishing out a badass groove, which is the driving undercurrent that gives guitarist Mark Vollelunga, bassman Daniel Oliver and singer Jonny Hawkins the ability to break into an insane, extreme and visual bass solo jam.

The “Bassinator” machine, is a bass guitar that mounts on a platform which allows the three band mates to spin the bass guitar in consecutive 360 degree rotations during the solo. They of course, bring the bass guitar back to a locked position for more bass madness, visually stunning! 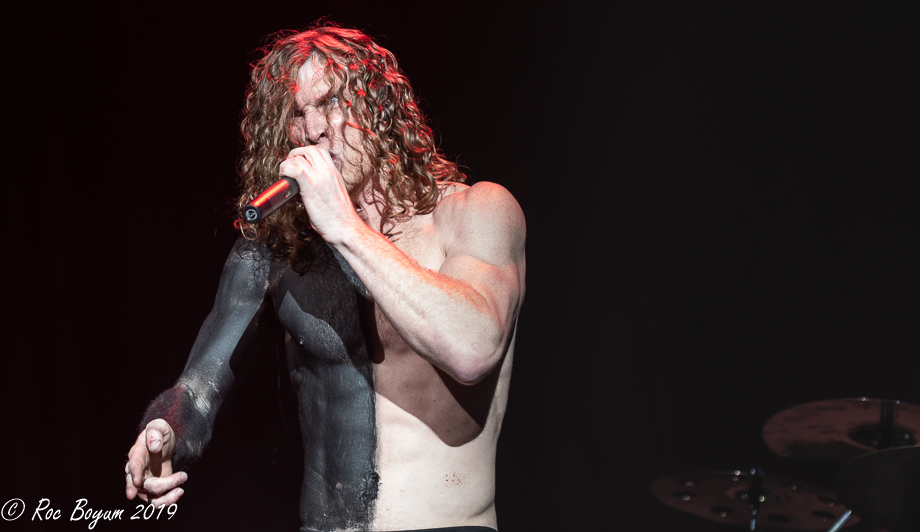 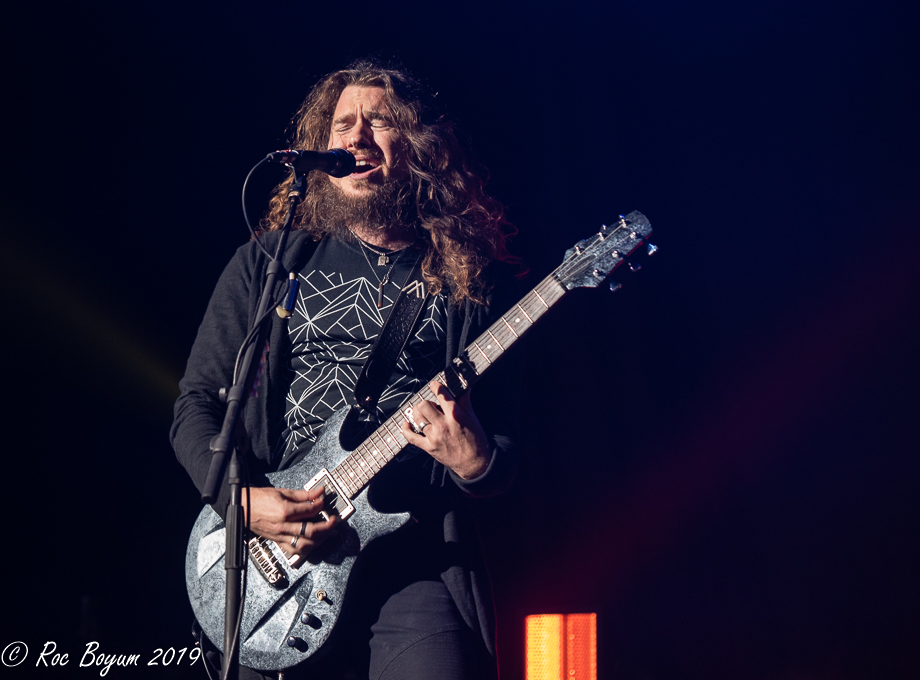 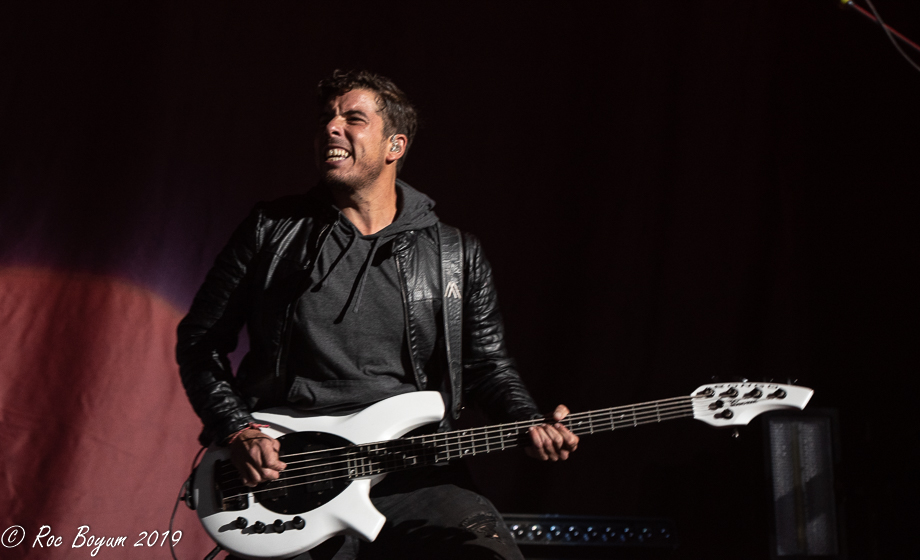 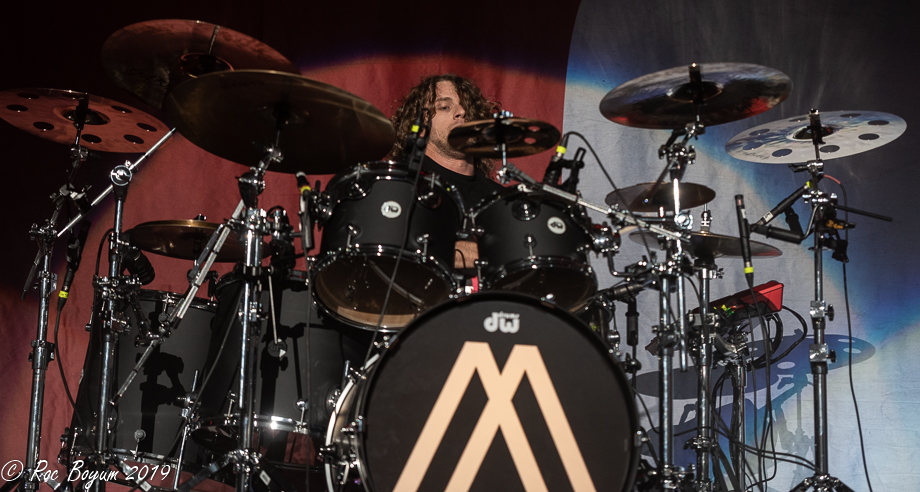 Up next was Go To War; the band’s award winning song, a song that was also featured in the latest Planet of the Apes movie. Following Go To War, was the fan favorite, Jenny; the latter song was introduced by Hawkins stating;

“This is a song about my sister.”

He then proceeded to fill the venue with passion and emotion as he sang his deeply emotional lyrics of his sister Jenny and the following song about his father.

As Hawkins introduced the next song, Fade in/Fade out he simply stated:

“This is a song to anyone who has lost a parent.”

Although this song has a subtle beginning; the song’s outro becomes a roaring jam that had the whole band collectively throwing all caution to the wind. During the outro, we found both guitarists jumping and assaulting their guitars, Hawkins was vocally wailing away, while drummer Anderson thrashed away at his drums with a destructive force.

The band finished out the night with Ocean Floor and This is the time (Ballast), both songs are from their 2014 self-titled LP and two cover songs; Skrillet’s First of the Year and a piece of Queen’s We Will Rock You!.

Once again, the band was playing it smart by leaving the audience with a song that they could sing along to and by giving them a visual feast with their invention, the “Scorpion Tail.” The “Scorpion Tail” as the band calls it, is a device that was constructed by the band’s bassist, Daniel Oliver and cannot really be described in words, one has to witness this incredible performance to really believe it; check out the clip below:

This video excerpt below of the Skrilett song – “First of the Year” was performed at the 2017 LOUDWIRE Music Awards with Nothing More and Hawkins, riding the “Scorpion Tail” , a real beast!

For the last song of the night, Nothing More left the audience with an excerpt from the Queen Anthem “We Will Rock You.”

With the entire venue singing along and chanting the words “WE Will ROCK YOU” it is certain that even though this was the first night of the Nothing More/Ghost tour, this band is on their way to adding many new fans to their already loyal and incredible fan base!

Check out the Nothing More Rabobank Photo Gallery here!

First of the Year (Skrillet Cover)

We Will Rock You (Queen Cover)