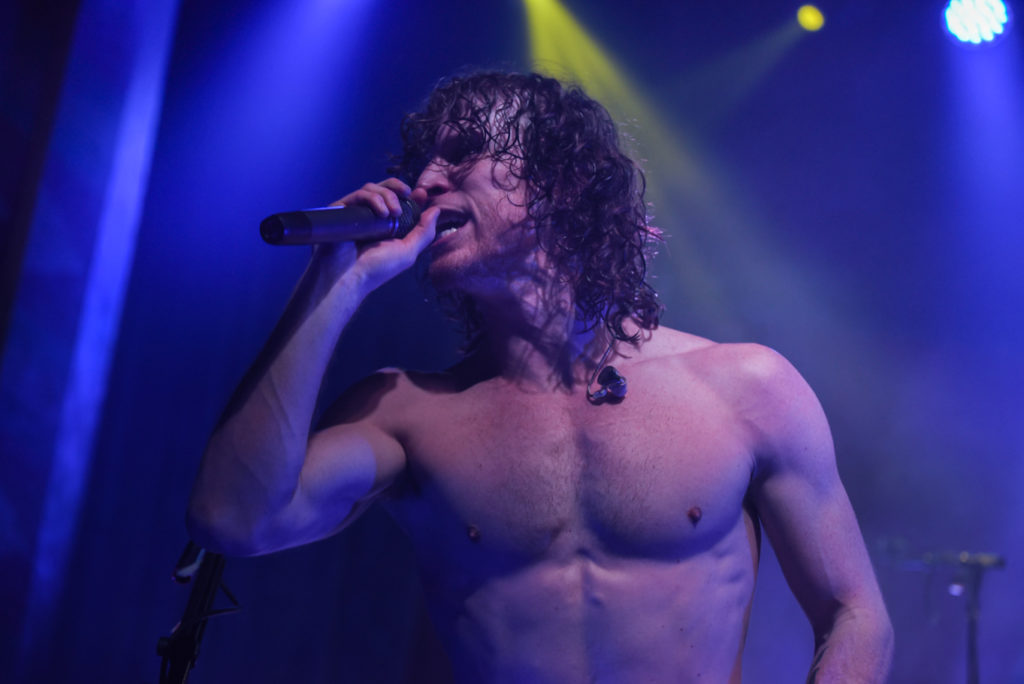 Grammy Nominees Nothing More were nominated for the 2018 Grammy Awards for Best Rock Performance for Go To War, Best Rock Song for Go To War and Best Rock Album with The Stories We Tell Ourselves.  In the Best Rock Album Category  Nothing More was up against Metallica for their album  Hardwired…To Self-Destruct-   extremely impressive company. If these impressive credits aren’t enough, the band will be the featured opening band in Barcelona Spain for the Guns N Roses show on July 1, 2018.

Nothing More blasted through Los Angeles on March 1, 2018 on tour in support of their  highly acclaimed LP, The Stories We Tell Ourselves. The massive volume of fans that crowded into the Regent Theater in Los Angeles to see Nothing More was almost as overwhelming as the incredible word for word sing-along generated by the entire crowd of  people in a packed to capacity, standing room only venue. The audience knew the words to every song and the entire crowd singing in unison was stunning and overwhelming, even   to the band. Reviews of this tour have said that this tour will give the fans one of the best shows they could possibly see this year and on this night at the Regent Theater the show surpassed any expectations …. the band was absolutely unbelievable!!!

Nothing More’s line-up is Jonny Hawkins-lead vocals, Mark Vollelunga-guitar, Daniel Oliver-bass and Ben Anderson-drums.  The band’s precision and synchronicity as well as their sincere passion are a testament to why they work so incredibly well together. As a band, they are a collectively cohesive unit and they go out of their way to give their audience the very best possible live show and performance anyone can give. Their new CD has a great progressive and alternative edge to the songs. But Nothing More live, takes on a life of its own and turns their sound into a much harder edge that is more progressive Hard Rock than on CD…many believe the harder Live sound is a much better sound for the band. 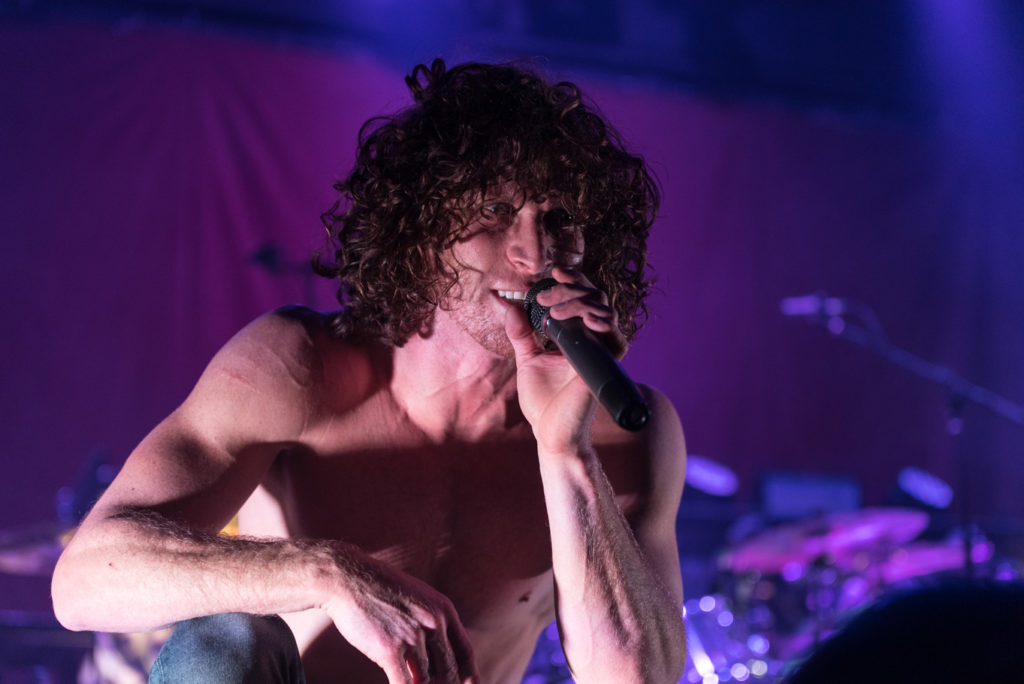 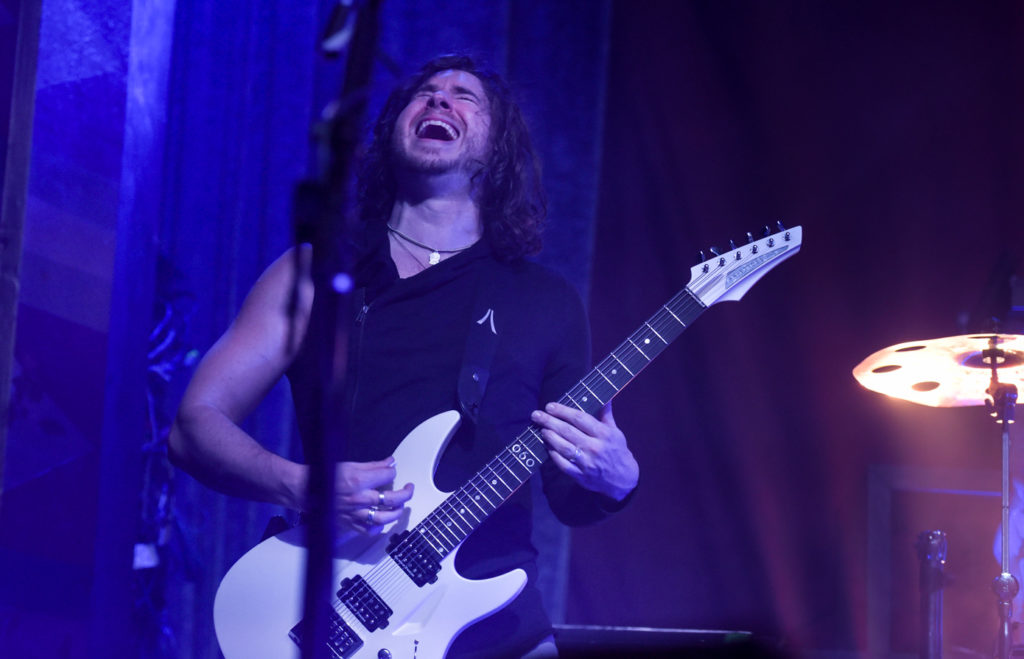 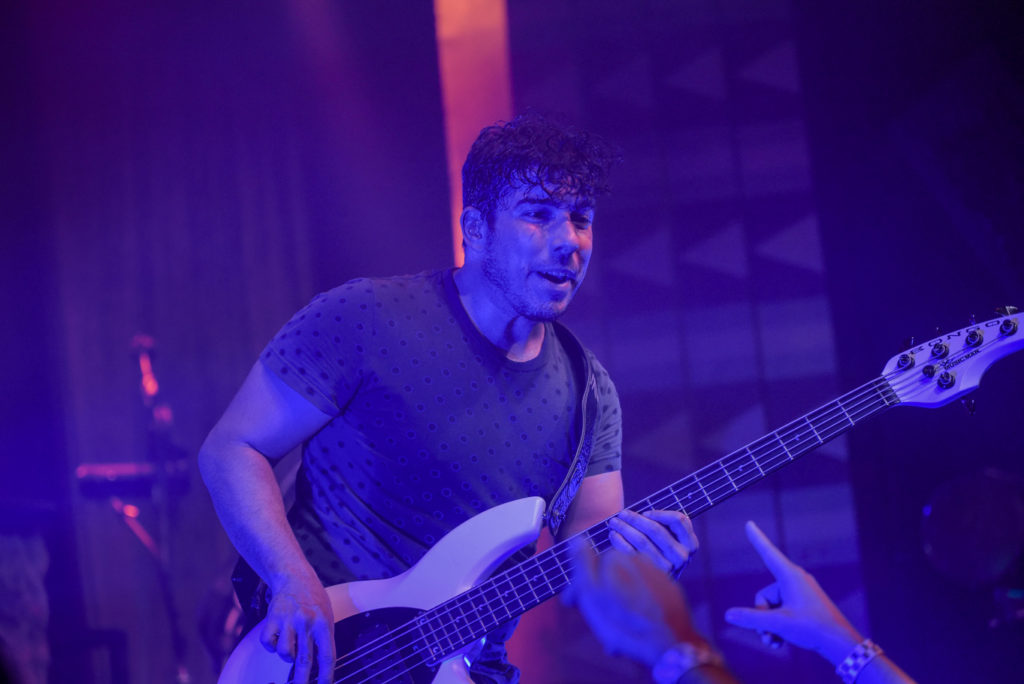 Hawkins was originally the band’s drummer before shifting gears to take over the lead vocals and become the front man for the band. This proved to be one of the best decisions the band has ever made, for both, the band and fans alike. 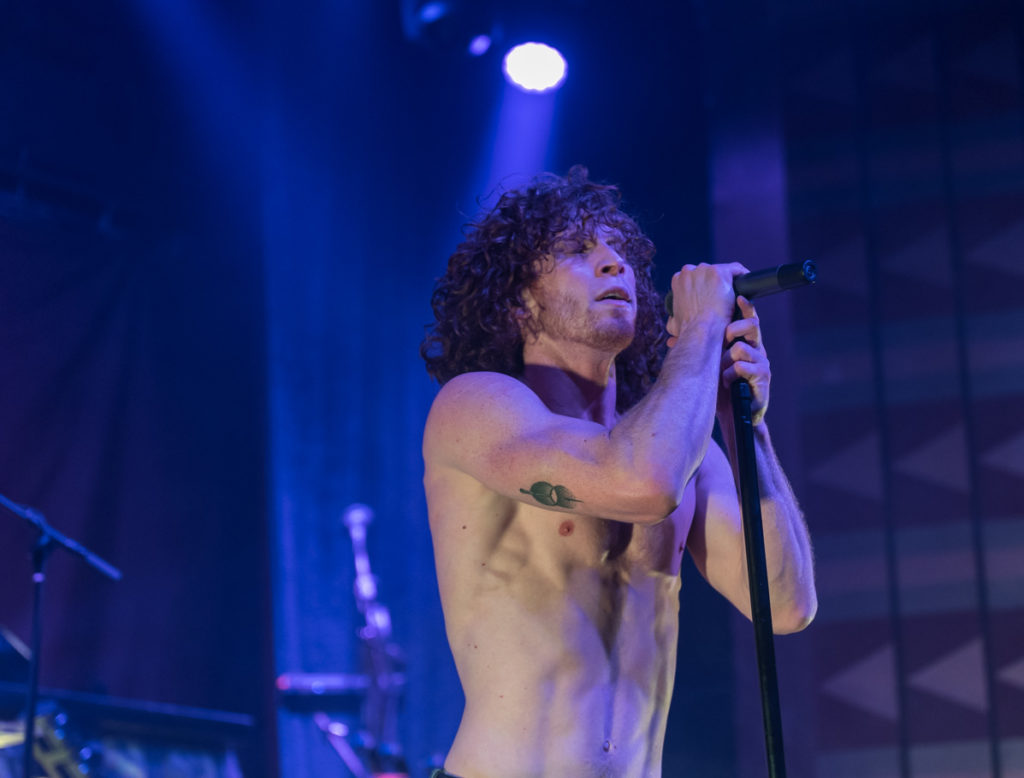 Nothing More is incredibly high energy with music that is a unique combination of Progressive Hard Rock arrangements, stellar musicianship and melodies that everyone can and does sing to. Throughout their set, the band explodes across the stage as the entire crowd sings along to every song.

The band presented a 17 song set with many fan favorites as well as insights into the band and their songs. At one point Hawkins commented that band had played in Los Angeles a few years earlier to a crowd of 20 people, mostly made up of their label at the time, Eleven Seven and representatives from Serious FM. Mid way through their set the band offered up the acoustic song Just Say When which is quite possibly one of the best songs from their latest LP The Stories We Tell Ourselves. For the song’s introduction Hawkins related;  this was a song that was almost left off the record, and we almost threw it away. On this night in Los Angeles it was easily one of the most intense performances and definitely a absolute fan favorite.

At one point in the evening Hawkins gave a narration of difficult beginnings in the early days with the band, as he announced the song Here’s to the Heartache from their 2014 self titled LP, he said “The path that has led me to where I am now has been anything but a straight forward path, with many twists, turns and difficult times. So, to those of you here tonight who might be in the middle of a rough road or on a coarse that doesn’t seem to be leading in the right direction, hang in there, because the path you’re on is most definitely the coarse, that leads you to the better place you are meant to be.” 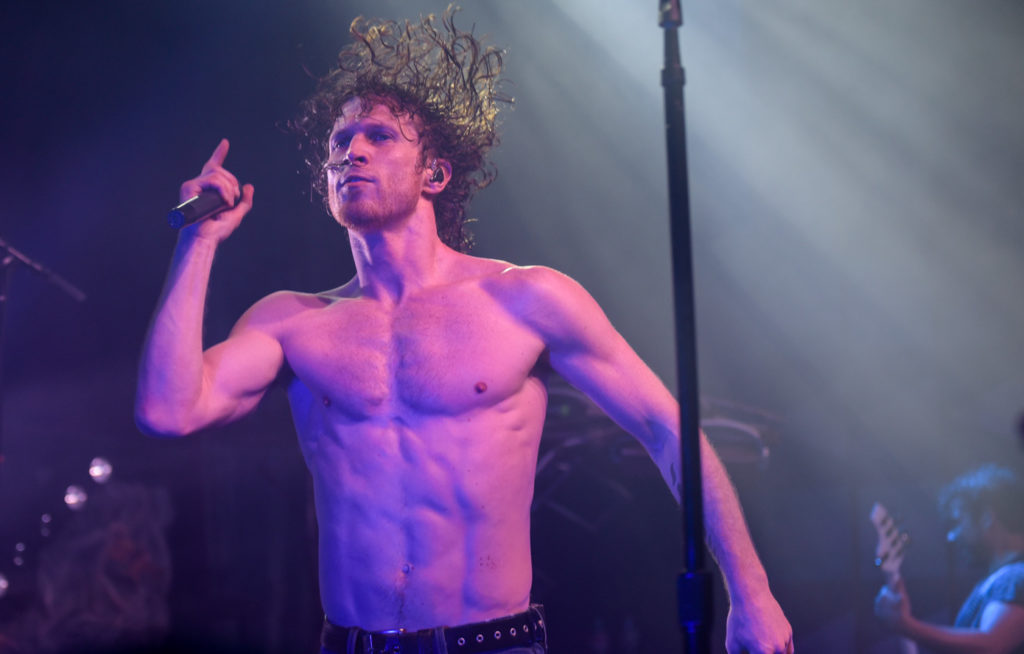 Other fan favorites included Don’t Stop, Do You Really Want it?, Fadein/Fadeout and Go To War from the hit film, War for the Planet of Apes. Jenny is a song from their 2014 self titled LP which needed no introduction; Hawkins simply said, here’s a song about my sister which incited an immediate fan fare eruption. Non-stop throughout the night, the audience sing-a-long with fan appreciation was so intense that Hawkins at one point was prompted to comment; this is indeed a lively crowd.

The last song of the night was Salem (Burn the Witch) from their 2009, The Few Not Feeling LP. The live performance transforms the band into a crazy drum ensemble de jour. During the song Hawkins is surrounded by several large floor toms on which he pounds away with a relentless assault in unison with drummer Anderson. Hawkins, who is pounding away at his own drums and exalts his melodic assault with spins, stick flips and jumping up and down from his drums like a crazed cross-fit mad man. Hawkins and Anderson are then joined by Vollelunga and Oliver who further ignite the melodic drum carnage like a seriously well oiled Taiko or Hawaiian drum group. Taiko is a Japanese style drum ensemble who play on different drums together.

These guys have songs and fans that are so engaging, you could see them live without knowing any of their material and still feel a connection to their music, almost like a surreal correlation to something you’ve always known, appreciated and that has always been a part of you; which is a very rare accomplishment for any artist.

NOTHING MORE PERFORM GO TO WAR AT THE LOUDWIRE MUSIC AWARDS

by clicking on the Nothing More LP The Stories We Tell Ourselves album cover below! 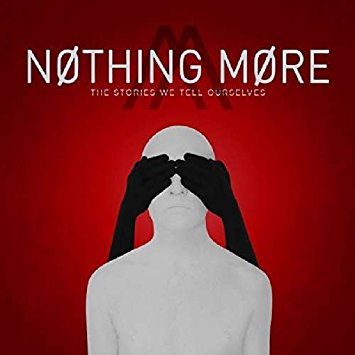 Nothing More-The Stories We Tell Ourselves

Also check out the Nothing More Regent Theater Photo Gallery by clicking here!

Or clicking on the picture below! 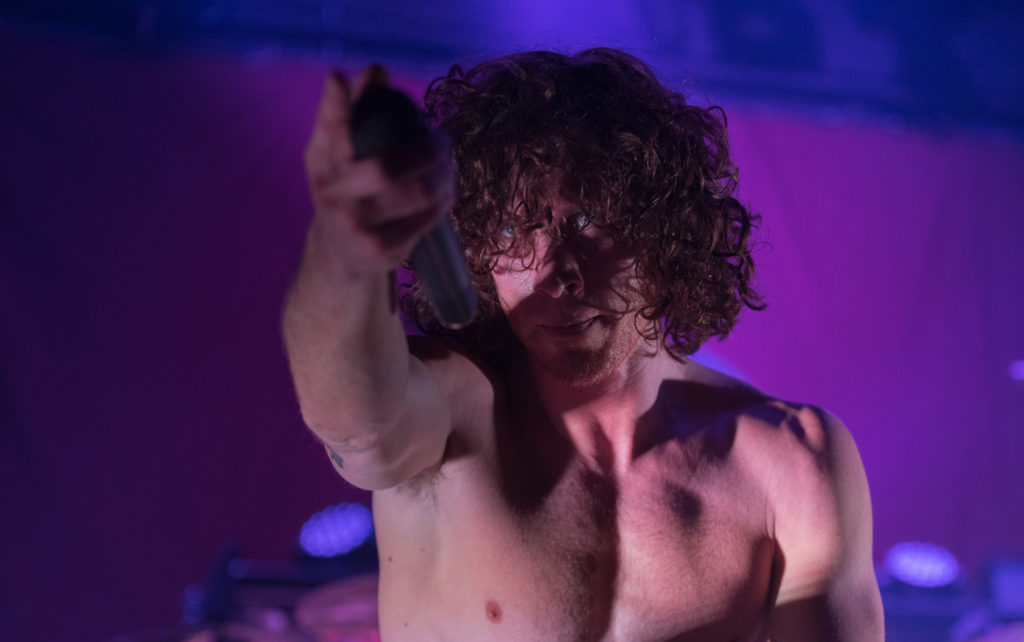 LA Metal Media talks to Jonny Hawkins of Nothing More!

Do You Really Want It

Here’s to the Heartache

First of the year