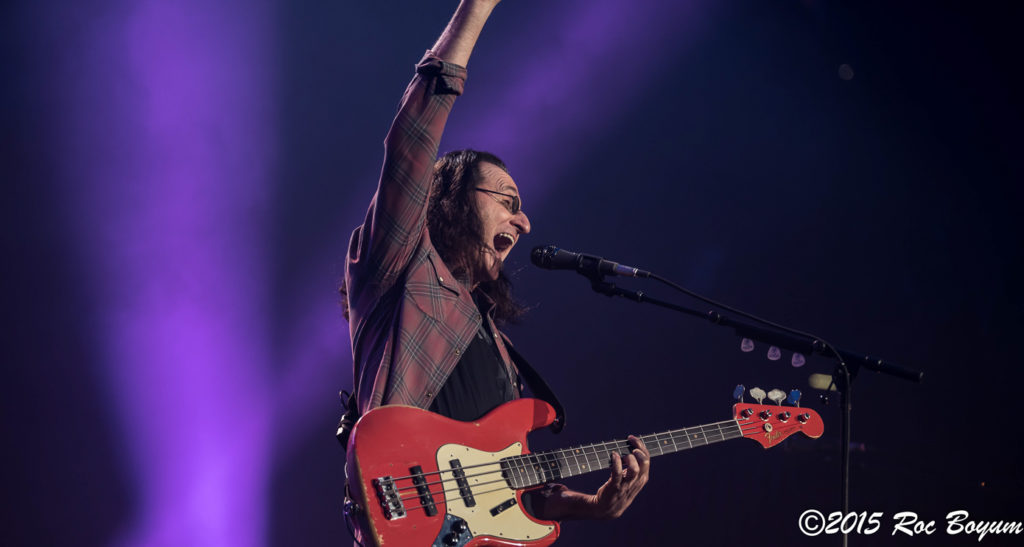 RUSH, Alex Lifeson, Geddy Lee and Neil Peart, ignite the City of Los Angeles with the final stop of their R40 tour at The Los Angeles Forum on August 1, 2015. The City of Angels came out in full force to celebrate their musical heroes and thank them for 40 years of incredible music; LA was honored to host their final show.

Over the years, Rush has presented many different back-line stage themes. For their R30 tour, there were the dryers with vending machines; for Clockwork Angels, the back-line had a steam punk theme;  and for this R40 tour, the band presented a very elaborate and interesting history of Rush, if you will. Their back-line changed throughout the night to reflect the era of music that they were playing at that point in the show; thus giving us a  back-line that was in a reversed chronological order.

The night began with an entertaining and animated video that was also a history of Rush –History that gave way to the shows’ explosive beginning. From a darkened stage the band appeared emerged in light and Peart as the Professor, hammered out his signature tom tom groove for the beginning of the Anarchist from the Clockwork Angels LP. The band immediately followed that up with yet another Clockwork Angels masterpiece, Headlong Flight that features a scorching solo from guitarist Lifeson and the first drum solo of the evening from Peart appropriately titled; Drumbastia.

The band continued to blaze their way through the set with brilliant versions of Far Cry and their most recent instrumental piece, The Main Monkey Business (which is their modern day answer to YYZ). Next was One Little Victory, which divulged the first clue as to which set list the band might be presenting this evening. This tour had several different set list variations and the LA crowd was eager to see what surprises the band might present and One Little Victory was the first clue as to the musical course for this show; considering that throughout this tour they had only played One Little Victory for their 5th song on two other occasions; June 29th in New York and on July 17th in Vancouver.

Peart then broke into the beginning of Animate with his bad-ass, deep and heavy groove. The band delivered this song with brilliant perfection that included the songs’ unique bridge section that has Lifeson soaring on guitar with his textural sounds that swirled throughout the venue and complemented Lee’s vocals. During this section, Peart gives the listener a most interesting and creative drum composition that was inspired by the drums he heard while on his bike riding tours through the villages of Africa. Peart, musically paints a picture on his tom toms of African drum voices from distant villages that were calling and answering to each other in a rhythmic conversation that echoed through the night air. 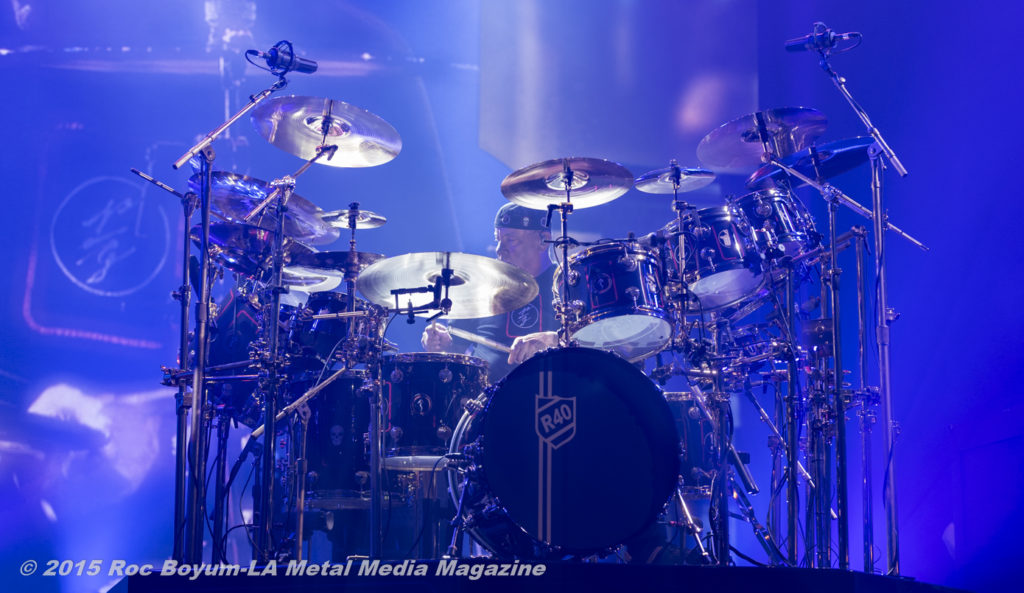 After Roll The Bones, came Distant Early Warning and the only song represented from the Grace Under Pressure LP which had the Forum crowd of over 17 thousand fans pumping their fists in the air in perfect synchronicity to the song’s syncopated breaks.

At this point, the crowd went crazy as Lee announced the song, Losing It from their Signals LP. Losing it, is a ballad which features an incredible Violin solo originally performed by Ben Mink. For this show, the band brought out Jonathan Dinklage, an incredibly accomplished violinist from their Clockwork Angels tour. Dinklage executed the songs’ ridiculous 11/8 time signature solo with shredding perfection. The entire audience responded with collective applause upon the conclusion of his awesome performance.

The Forum then echoed with manic frenzy as the band finished their first set with a blistering version of the fan favorite Subdivisions from their Signals LP.

During the break, you could hear fans talking about past LA Forum Rush shows and how much better the acoustics seemed to be in this newly renovated building. As I walked through the concession halls, I could hear many fans singing; “the bell tolls for thee”, a line from the song Losing it. I had a chance to talk to a few fathers who brought their kids to this show for their first concert experience. After the first set, these kids were excited to now be part of the Rush community and couldn’t wait for the next set to start.

After the brief intermission, the band returned for their second set with it’s back-line changed to circa 1981 to reflect the tour supporting their Moving Pictures LP. They would continue to scale back their back-line as they continued back in time during this set and the encore; the only piece of equipment that would remain a constant throughout this set, was Peart’s drum kit, “El Darko.”

“El Darko” is Peart’s reference to the black-chrome Slingerland kit Peart played during their “A Farewell To Kings” and “Hemispheres” tours. Peart commented that the new DW version of this drum kit far surpassed his 1970’s kit in tone, resonance, play-ability and “shininess!”

The second set began with the famous South Park video animation of “Lil Rush” counting off the first song, Tom Sawyer which is said to be the band’s most popular song. The band then continued with the last song representing their Moving Pictures LP with the brilliant Red Barchetta.

The band continued their journey back in time with two incredible tracks, The Spirit Of Radio and Jacob’s Ladder from their “Permanent Waves” LP.  The Permanent Waves LP was undoubtedly a turning point for the band in terms of popularity as they moved away from the longer musical pieces on previous LPs in favor of a more concise sound. While some of the songs on “Permanent Waves” were more radio friendly, the song still managed to represent their signature progressive rock style with odd time signatures and impressive technical prowess.

The lighting and sound for Jacob’s Ladder transported the crowd into a Mystical Realm that echoed throughout the arena.

Continuing the musical journey back in time the band treated the Los Angeles crowd to a brilliant medley of Cygnus X-1 with parts of “Book One” from A Farewell To Kings and parts of “Book Two” from the Hemispheres LP. This particular collection of Book One and Book Two of the “Cygnus X-1” story had never been played live in this combination before this tour and had their frenzied fans jumping in the isles.

They followed with the perennial fan favorite Closer To The Heart where the audience became a sea of lighters, lighted cell phones and special 2112 lights that the fans waved in the air.

The band then brought forth the epic opus masterpiece, Xanadu from their Farewell to Kings LP. For Xanadu, Lifeson and Lee came out with double guitars. Lifeson’s double neck guitar is a combination of a six string and twelve string guitar while Lee’s is a six string guitar and a four string bass guitar; Lee, I believe was the first musician to come out with the guitar combination.

Although the second set was almost over, it couldn’t be complete without a medley of at least part of the story of 2112.

For R40, Rush created the perfect blend of 2112:1 – Overture, 2112:II – Temples Of Syrinx, and 2112: IV – Presentation (with Lifeson’s fret burning solo) and 2112: VII – The Grand Finale. This was the perfect end to an absolutely brilliant set of incredible Rush classics.

The stage set-up continued to scale down and with only a few songs remaining in the encore. The stage became a set of single amps with a back drop of a basketball gym that represented their humble beginnings.

The encore consisted of Lakeside Park, Anthem, What You’re Doing and Working Man; which contained the the final shredding Lifeson solo of the evening and made for an incredible and unforgettable night.  A night that all of Los Angeles would forever treasure.

Typically, for the final bow, Peart waves at the audience from behind the drum kit; and Lifeson and Lee take their bow out at the front of the stage. For this night for the first time in the bands’ history, Neil Peart joined Alex Lifeson and Geddy Lee at the front of the stage for the bow; potentially signifying what my photo pass indicated, Roman numeral 40 with a red line through it; meaning Done! 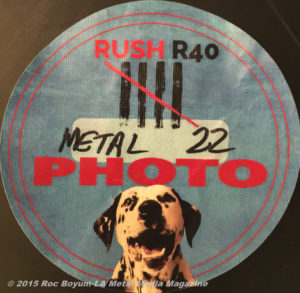 Farewell may be on the lips of many, but Rush played with the enthusiasm and precision that would make one think they’ve got many more years in the tank.

Thank you so much Los Angeles, on behalf of the greatest crew and organization in the world, on behalf of our whole organization, thank you United States of America for 40  Awesome years, and I do hope we’ll meet again sometime! Bye Bye!

Many fans held up signs thanking the Rush for 40 years of incredible music; and that really says it all!

It was a night for the history books that’s for sure and indeed an epic encounter with the 3 luminaries known as Rush. Rush is a band that has indeed inspired us all with their music, their lyrics, their humor and as amazing people who have given so much of themselves to their fans. Thank you Rush for everything that you are! 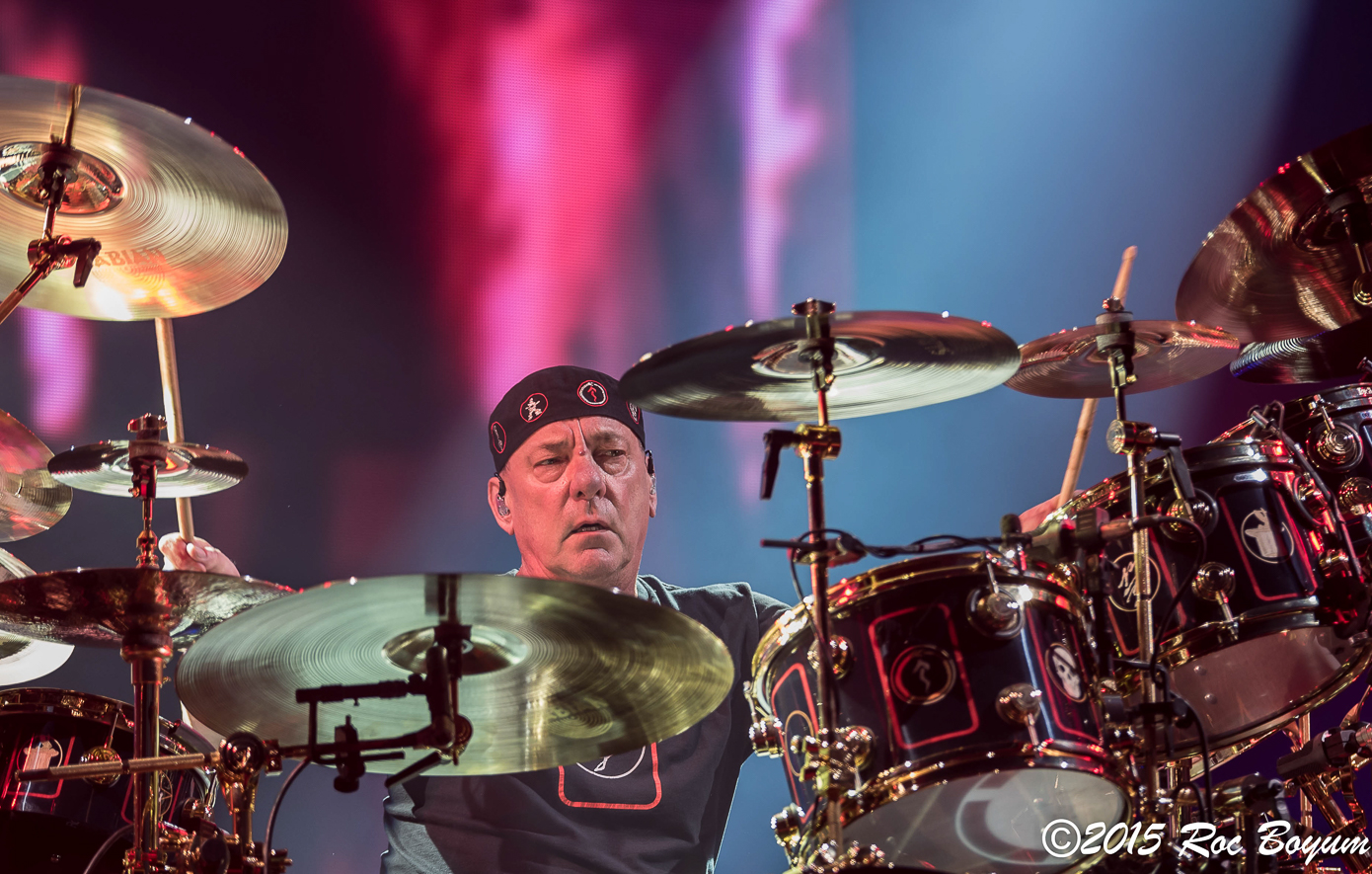 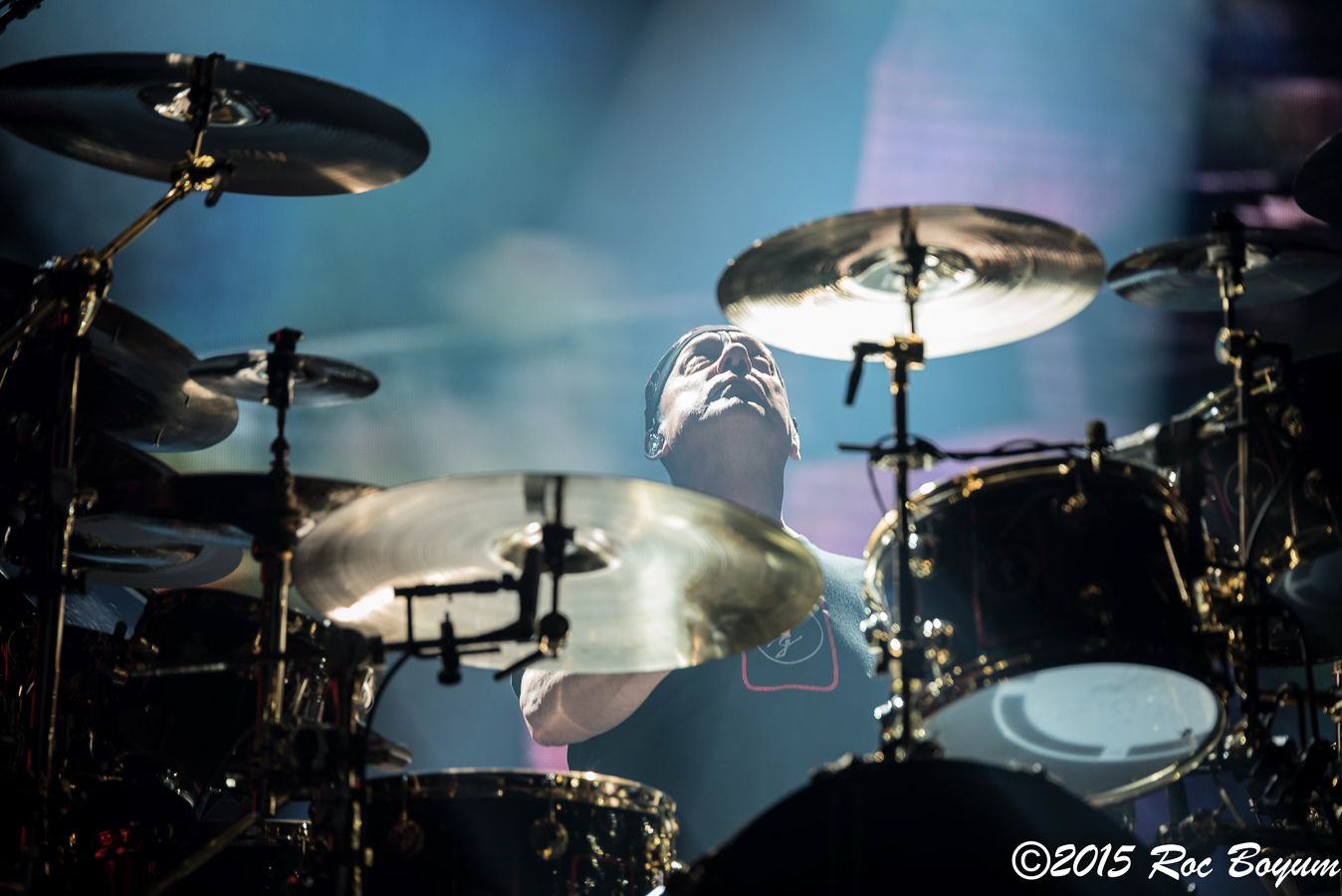 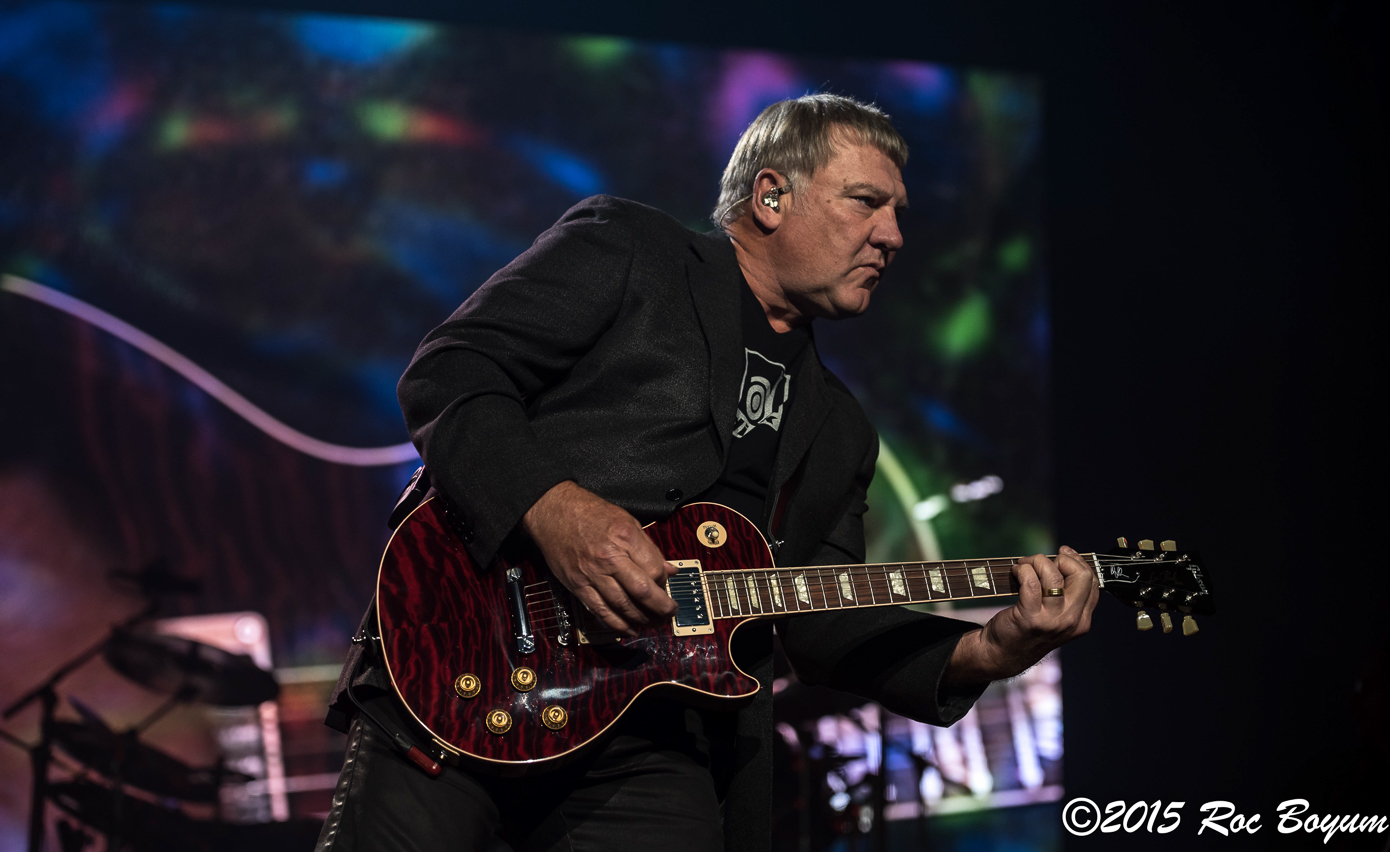 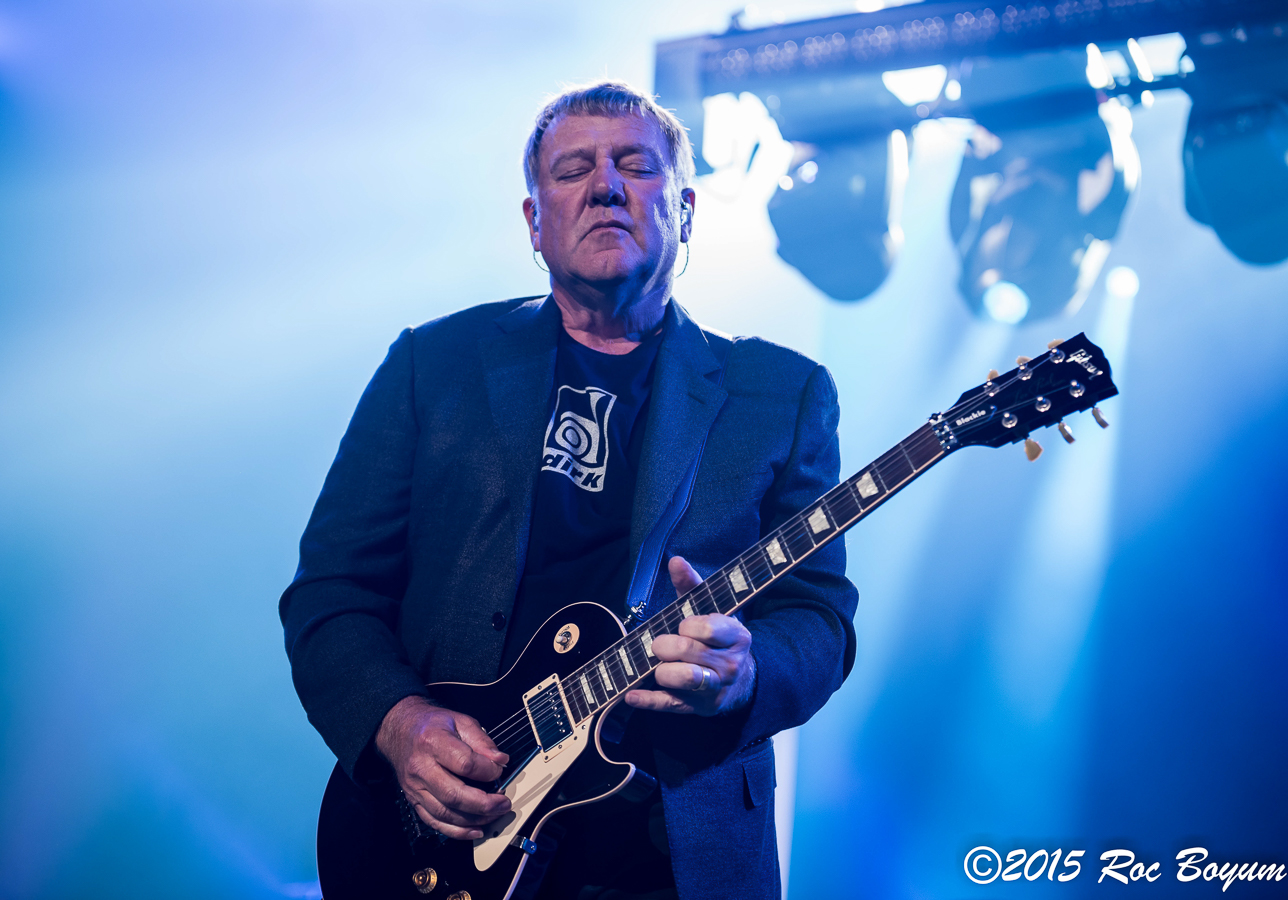 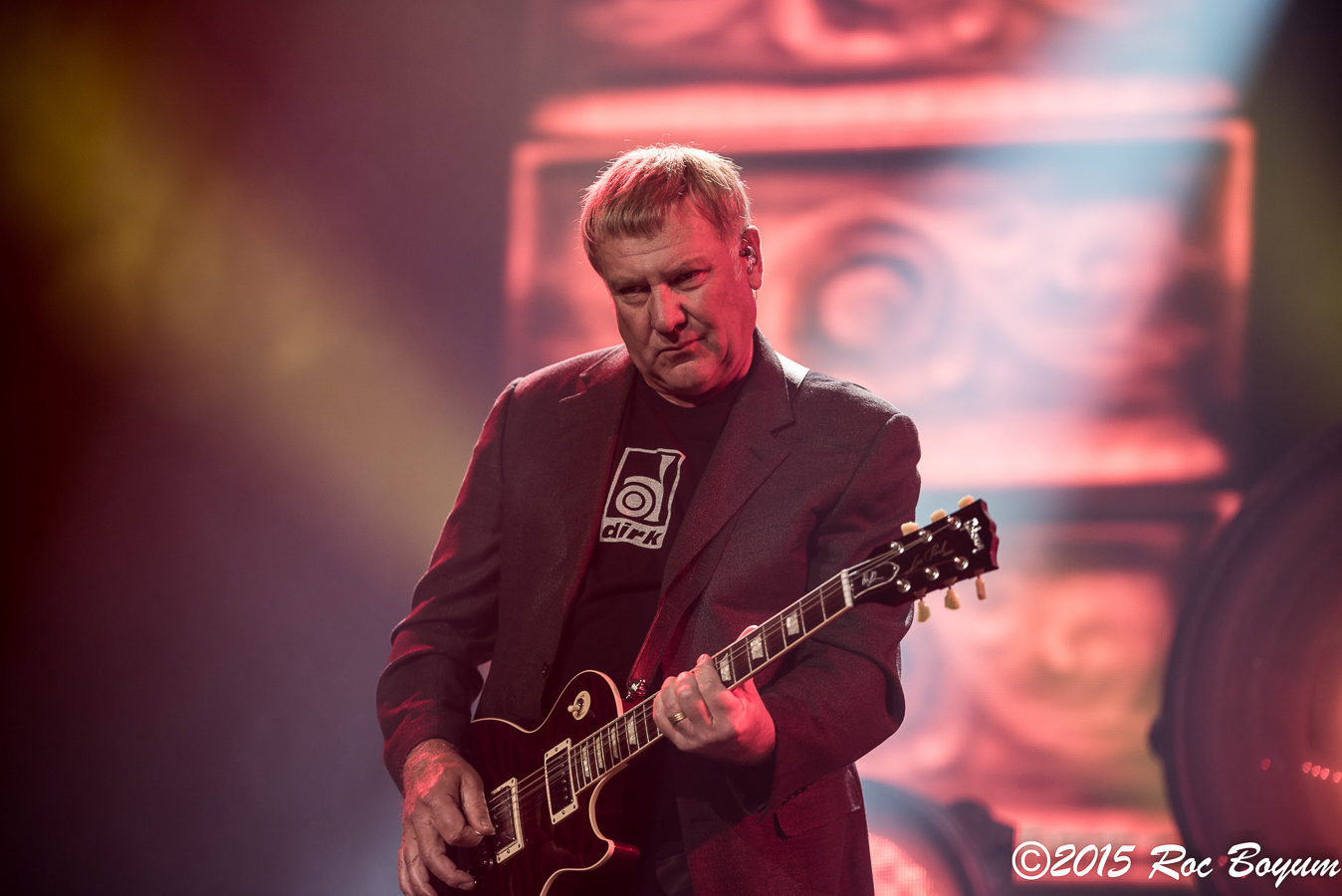 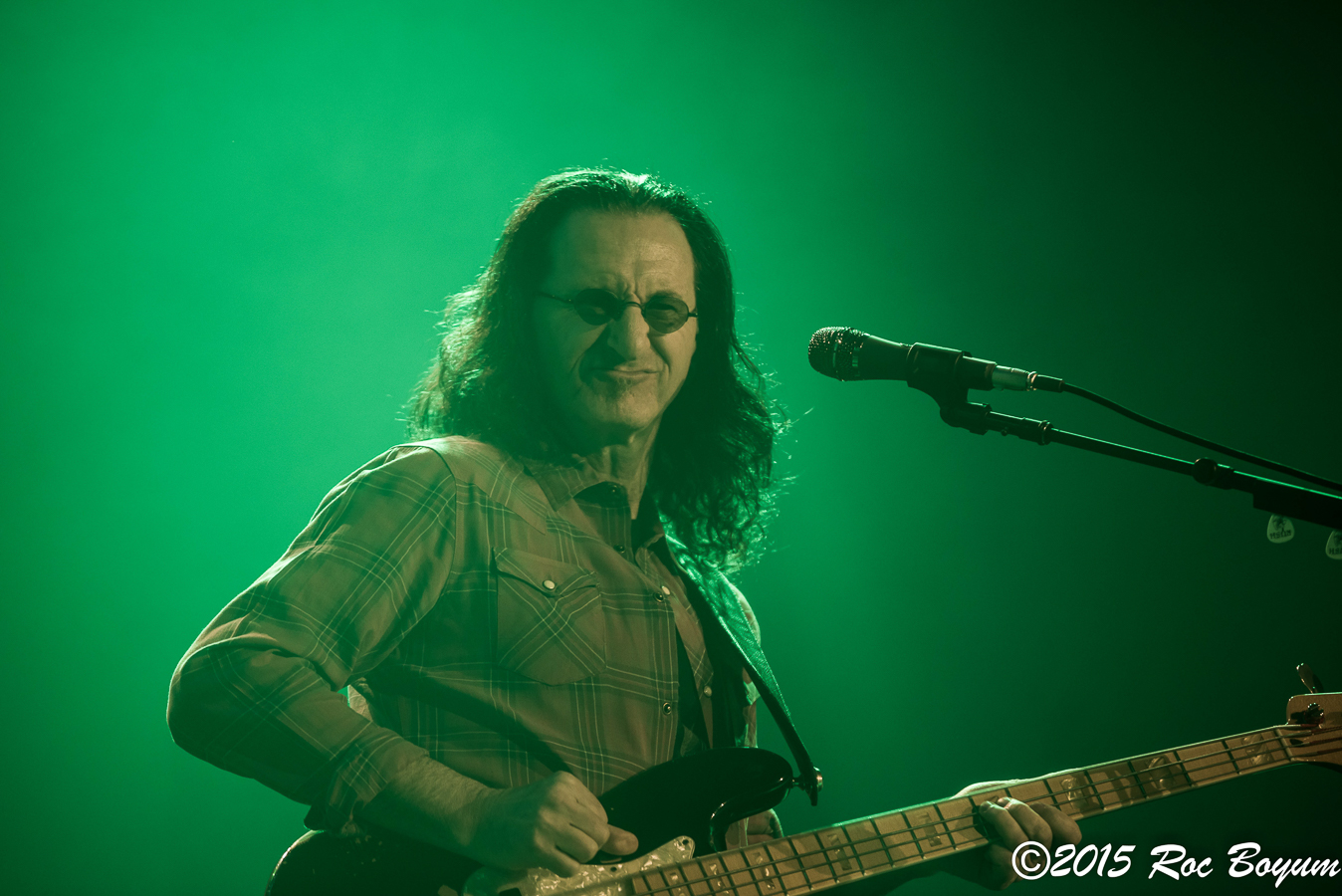 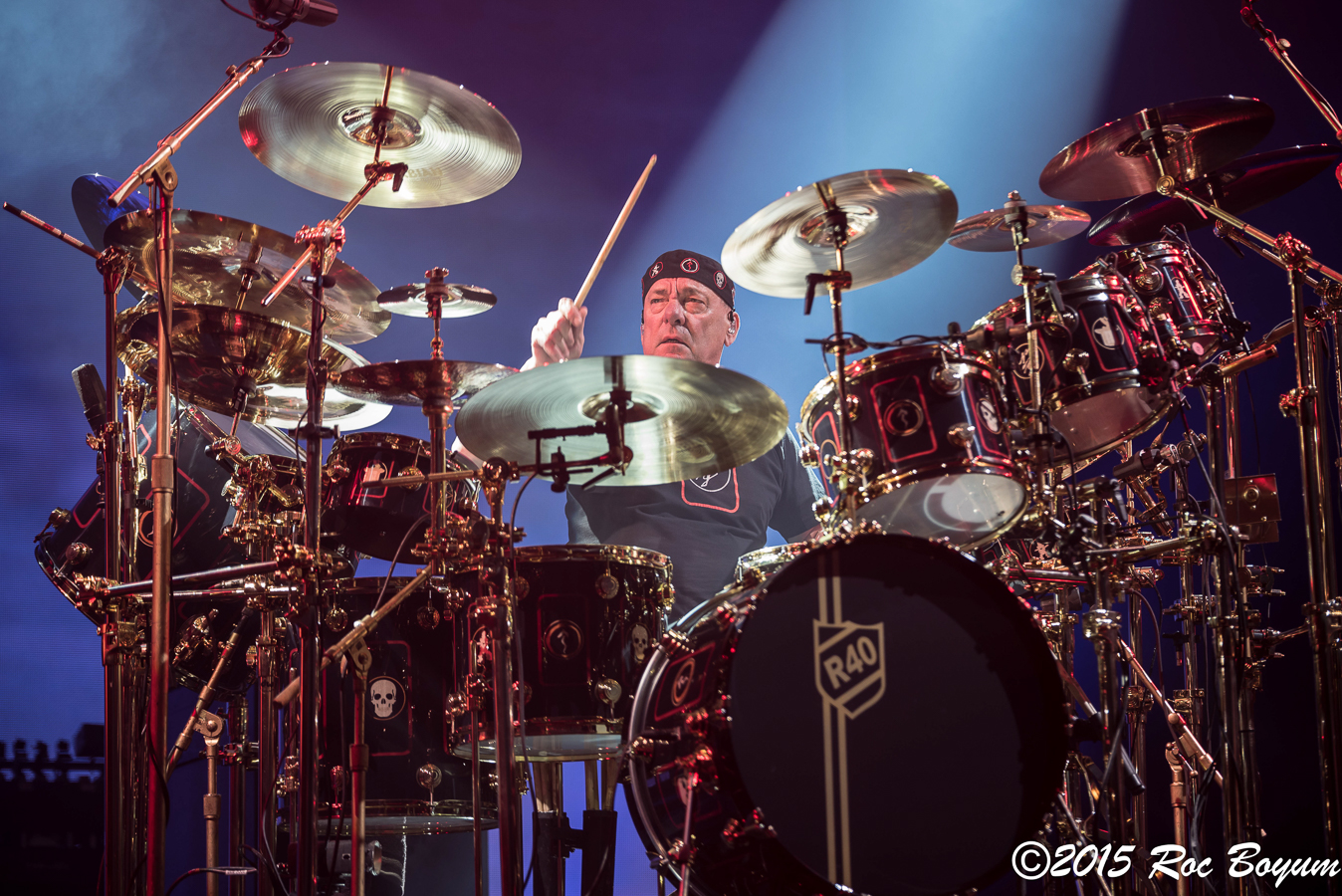 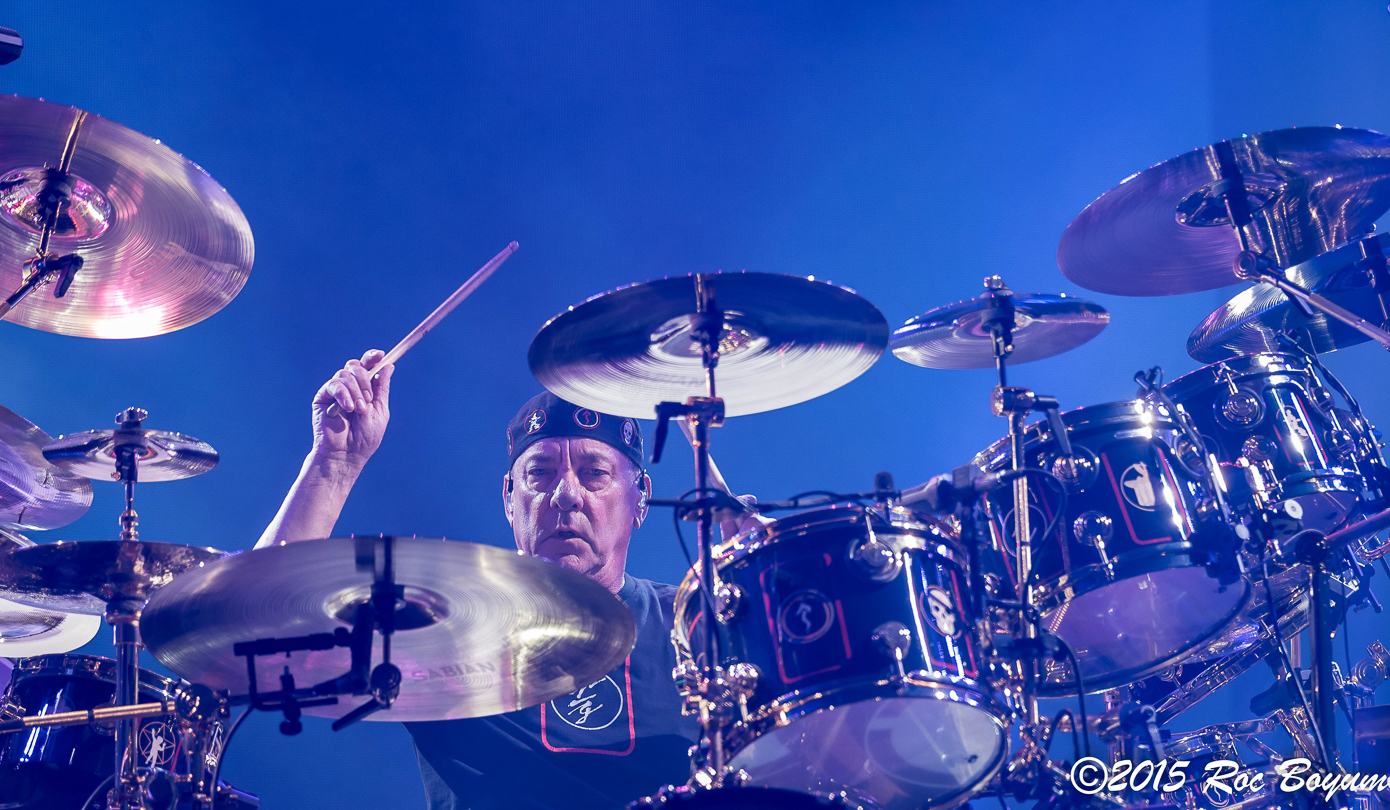 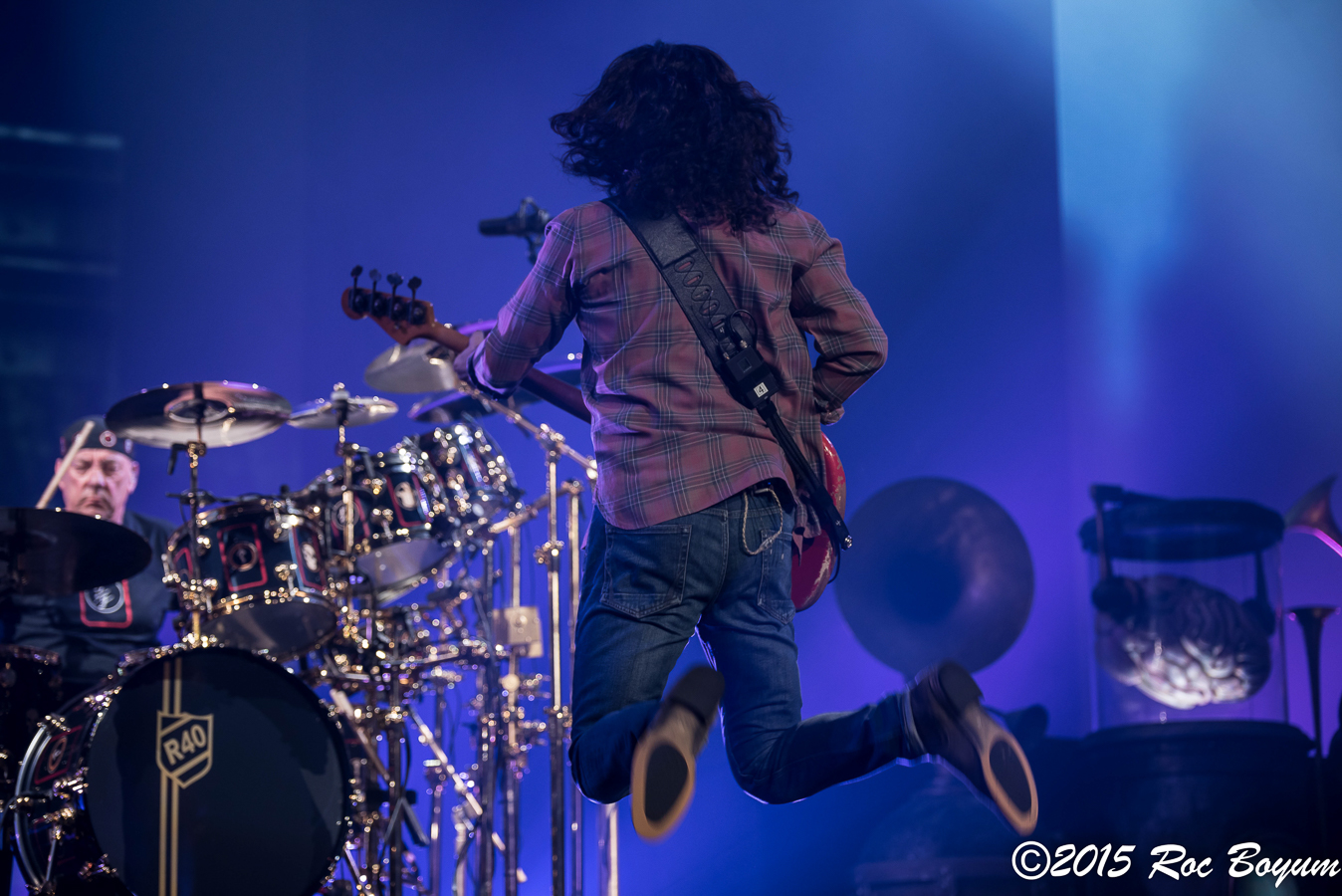 All Photos by Roc Boyum for LA Metal Media Magazine