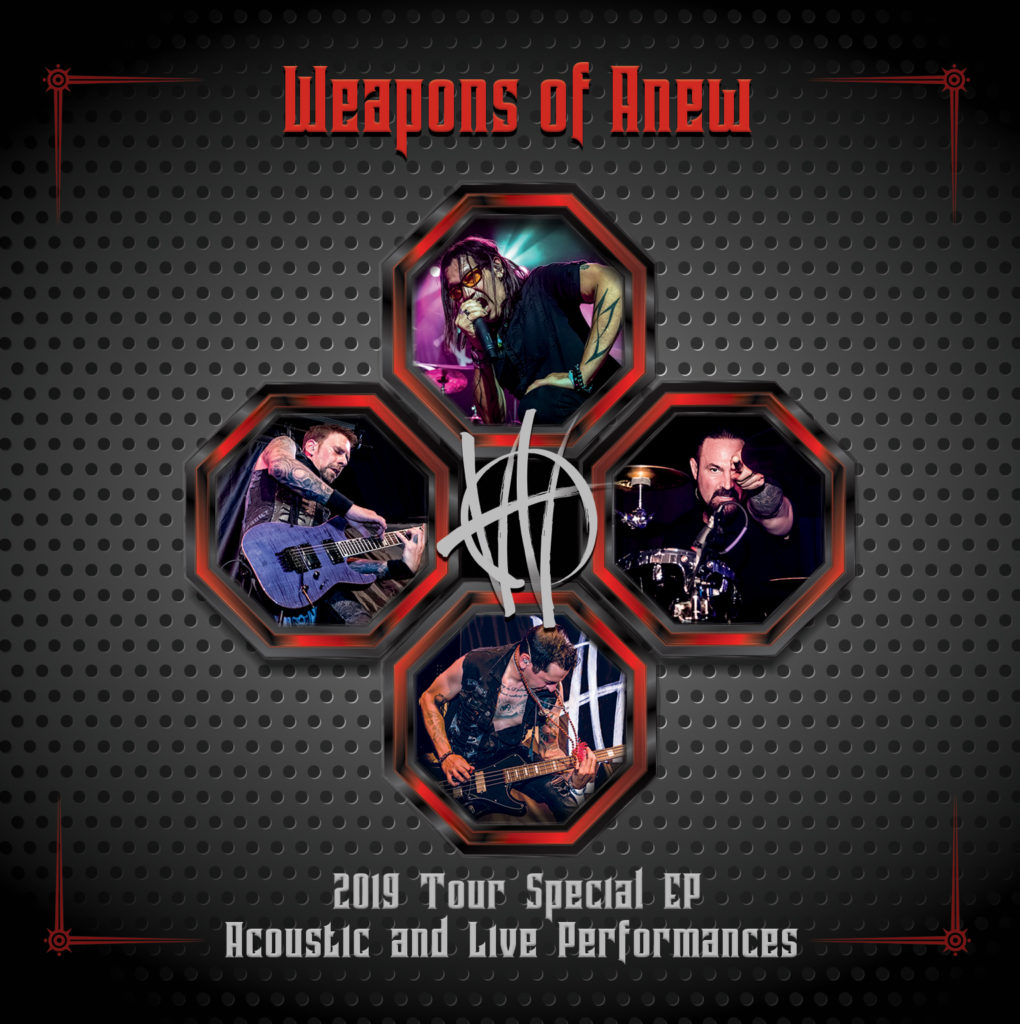 Metal Allience,MiOnline press kit for Weapons Of Anew can be found here: https://www.opk.solutions/woa2019

New Jersey-based melodic metallists Weapons of Anew will be releasing a new mini-album in time for the holiday season, when the ‘2019 Tour Special EP’ drops on December 13th.

Recorded live on July 30th, 2019 from the Palace Theatre in Greensburg, PA, the five-track release features vocalist Ray West supplying gut-wrenching, pitch-perfect vocal acrobatics worthy of any top 10 singer list, Freddy Ordine’s tasty shreds that are guaranteed to melt any metal fan’s face right off, and drummer Chris Manfre and bassist Stephan Reno Cutrupi sounding so tight that you never really “hear” the rhythm section – as much as you feel it in your chest. Additionally, these live performances were mixed by famed rock producer, engineer, mixer Mike Ferretti (Sevendust, Breaking Benjamin, Warren Haynes).

“The response we have gotten from fans to our live show has been overwhelmingly positive,” says Ordine. “So as a special ‘thank you’ to those who have attended our shows and supported us from the very beginning, we have assembled this special EP, which serves as the perfect preview of what to expect from WOA in concert, and also, including the first time the band has ever released an acoustic-based track, with an ‘unplugged’ rendition of ‘Moment’.”

Also, WOA will be opening for Metal Allegiance on January 16, 2020, at the House of Blues in Anaheim, CA. “We are really looking forward to sharing the stage again with Metal Allegiance,” adds West. “We have played with them before and had a blast…and we picked up many new fans in the process!”

The band has already honed their live show, opening for the likes of Alter Bridge, Tesla, and Metal Allegiance, and will be performing standouts from their latest album, ‘The Collision of Love and Hate,’ including the single, “Killshot,” for which a hard-hitting (literally!) video was filmed for: https://www.youtube.com/watch?v=MNg-4pNrjEQ

And WOA has already received praise from the rock press:

“[Weapons of Anew] had no shortage of energy with their stage performance…[and] left the crowd wanting more.” – Shockwave Magazine

“[Weapons of Anew] kept the audience mesmerized and could have easily played a longer set. They are definitely a band to watch out for.”  – Music Life Magazine

Rarely are such accolades showered upon a band that had just completed their first-ever live shows and had yet to release their debut disc, but that’s what happened when WOA opened Alter Bridge’s ‘The Last Hero’ Tour! WOA have been unleashing their brash, bold sound upon audiences, including this past summer as the opening band for Scott Stapp’s summer tour. Also, guitarist Ordine has already been endorsed by some of the best-known instrument companies – ESP guitars, Mesa Boogie amps Bogner amps, GHS strings, EMG pickups, AND Jim Dunlop picks and wah pedals.

Currently prepping for a new release coming in 2020 again with producer Mike Ferretti, Weapons of Anew serve up this holiday platter of acoustic and live performances. All the songs on the EP are from their debut album, ‘The Collision of Love and Hate,’ which was released in 2017. Give it a listen, and get ready for WOA in 2020!

Weapons Of Anew live promo clip for the new E.P release can be found here: https://youtu.be/YKvHv9Umjng

To download or stream the bands new E.P., please visit: