The Iron Maidens Concert Review and Photos By Roc Boyum

The Iron Maidens are the world’s only all-female tribute to one of the greatest bands in rock and metal music history; Iron Maiden! On January 07, 2023, The Iron Maidens returned to The Marquee Theater in Tempe, AZ for a great headline show of… well, you guessed it; Iron Maiden classics. This show was most likely their warm up show for their upcoming European tour that starts on January 14, 2023 as direct support for another great metal band, Accept.

The Iron Maidens have been paying their tribute to the mighty Iron Maiden since 2001, so, to say that they have the music of Iron Maiden down pat would be a great understatement. Drummer Linda McDonald is the only member from the band’s original lineup with bassist Wanda Ortez having joined the band shortly after the band’s formation. It’s this longtime rhythm section collaboration that creates a solid driving force that is essential in propelling the musical juggernaut known as “Iron Maiden.”

So, with regard to tribute bands in general, there are usually several questions that come to mind when going to see one of these bands live; 1) how does the band sound and 2) does the band look like the original band members. As far as each member looking like any of the original members, I don’t think it’s really that important and since this is an all female lineup; there’s obviously no need to go there anyway.  So with that being said, it’s really all about the music and how does any given tribute band sound compared to the original band. In the case of The Iron Maidens, this band, for all intents and purposes sounds exactly like the original band while employing only two guitarists instead of the three guitarists that the current lineup of Iron Maiden has on board. Usually, all the instruments, bass, drums, guitars etc. are covered and executed with no problem, so it’s generally about the vocals that can make or break the sound of most tribute bands. With The Iron Maidens we find singer Kristen Rosenberg really nailing the whole “Bruce Dickenson” vibe which helps to give the audience the feel like they’re really experiencing the music of Iron Maiden while vocally, she adds a slightly different element that makes this unique to her style and that fits in perfectly with the Iron Maiden experience. The other musicians capture and replicate the Iron Maiden riffs and sound with bassist Wanda Ortez playing all those crazy and intricate Steve Harris bass lines, all the while guitarists, Nikki Stringfield as (Dave Murry) and Courtney Cox as (Adrian Smith) work together to deliver all those iconic Iron Maiden guitar lines with each guitarist and their respective solos. Drummer McDonald tears through the rapid fire single stroke rolls by Iron Maiden’s first drummer Clive Burr and the more calculated approach by Nicko McBrain who is Iron Maiden’s current long time drummer; BTW, McDonald also covers some of the backup vocal duties as well; you won’t get any of that from Nicko McBrain!

If you want to get your Iron Maiden fix and hear the music of Iron Maiden in a club setting and be a part of the audience participation – a crazy live vibe like you would get in a South American concert and/or soccer match without paying their associated crazy high-ticket prices and associated traffic hassle; then The Iron Maidens is the band for you!

The band presented a strong 10 song set with an additional 3 song encore of some of Iron Maiden’s greatest material. Right out of the gate, the band broke loose with a really tight version of a song that is synonymous with Iron Maiden; “The Trooper”. Singer Kristen Rosenberg came out waving a British flag to pay homage to Iron Maiden’s homeland.

Their set consisted of mainly Iron Maiden prerequisite songs as well as a couple of more obscure numbers from the Iron Maiden catalogue, including a brilliant version of the all-instrumental song “Genghis Khan” off the band’s Killers LP that is a favorite for some of the more die-hard Maiden fans. The song “Fear of the Dark” came with all the audience participation that you get at a large venue “Maiden” show.  Starting off with the audience singing the beginning guitar lines to the song.

“Run to the Hills” and “2 Minutes To Midnight” had some of the greatest audience participation of the night with the audience singing along to every word – and with drummer McDonald burning out all those Clive Burr ripping single stroke rolls in “Run to the Hills” while singer Rosenberg engaged the entire audience to join in on the sing-a-long to the chorus of each song.

The three song encore of “The Prisoner”, “2 Minutes to Midnight” and the seven plus minute power rocker, “Powerslave” made for a great end to a great replication of the Iron Maiden experience. This was definitely an awesome way to get the beginning of 2023 kicked into high gear.

Whether you’re a casual Iron Maiden fan or a die-hard fanatic fan, The Iron Maidens will give you a killer set of Iron Maiden music that will make you feel glad you got out to get your “Maiden fix.

Check out The Iron Maidens Here! 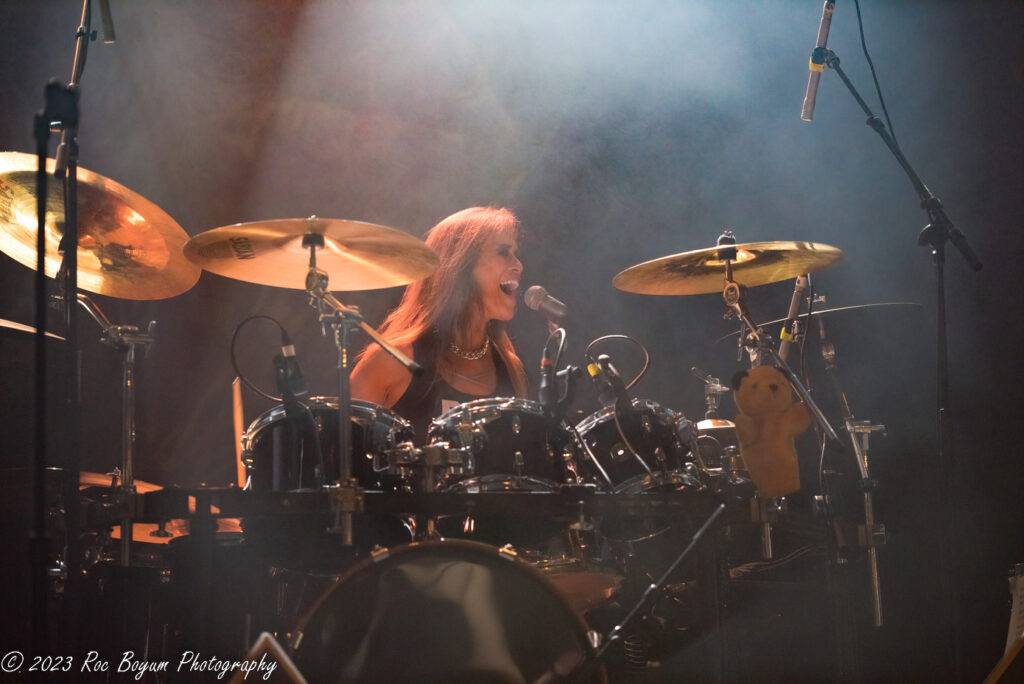 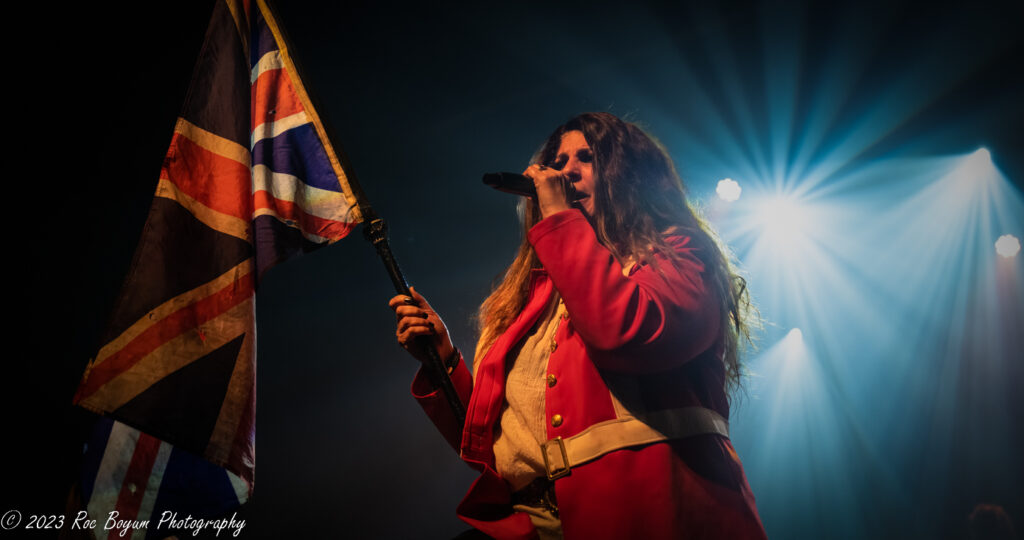 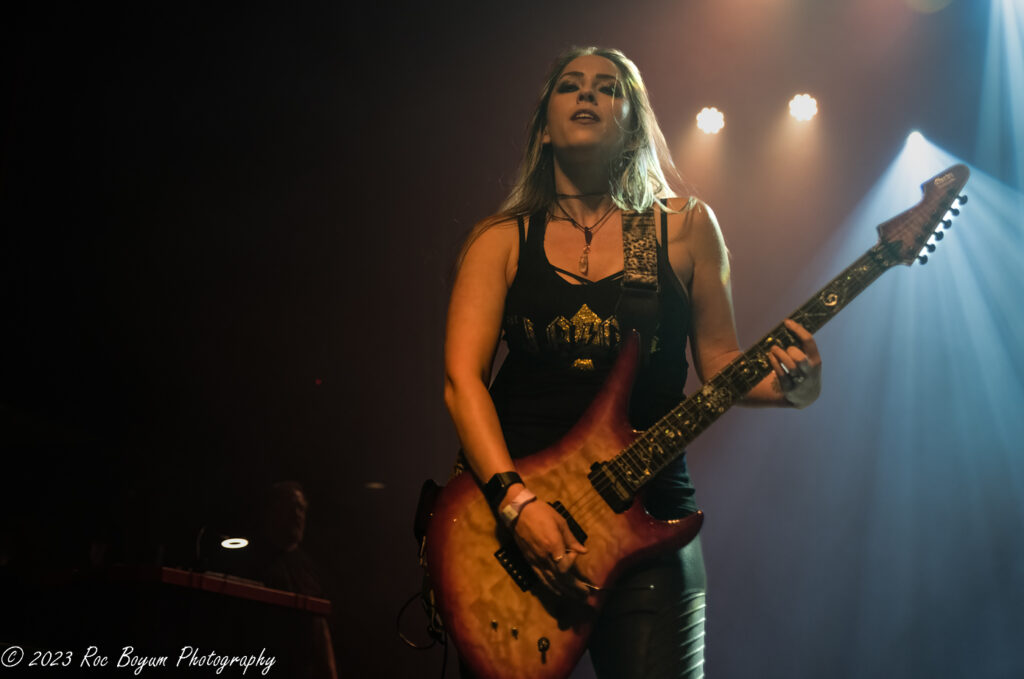 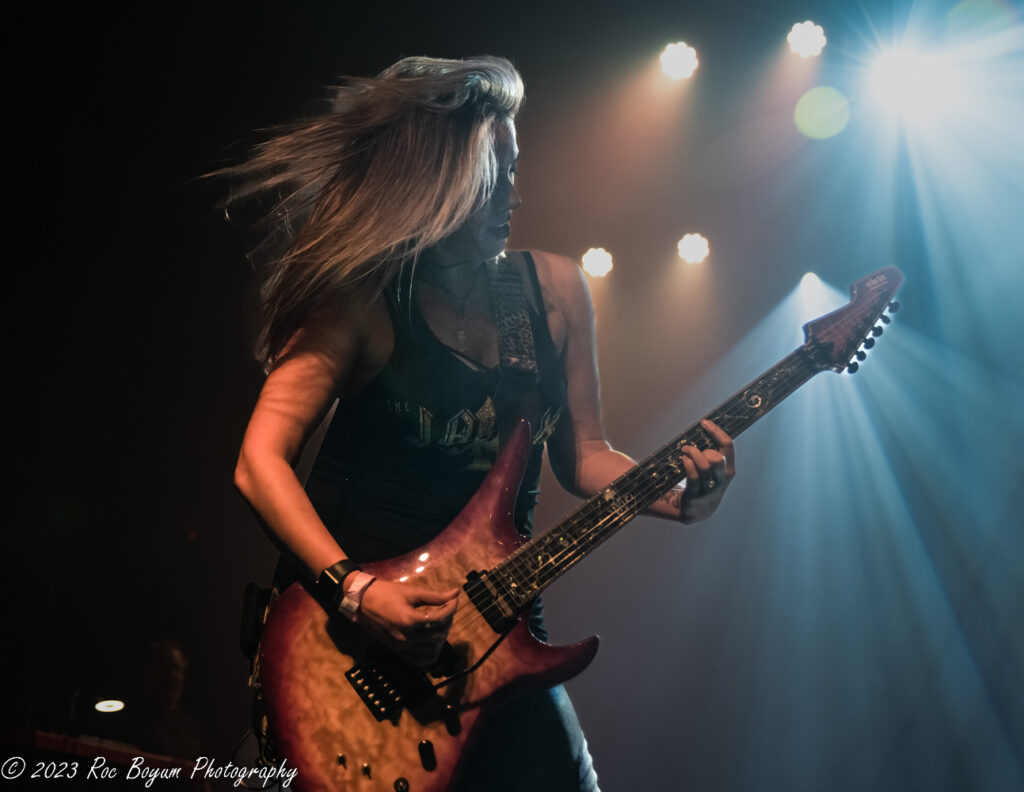 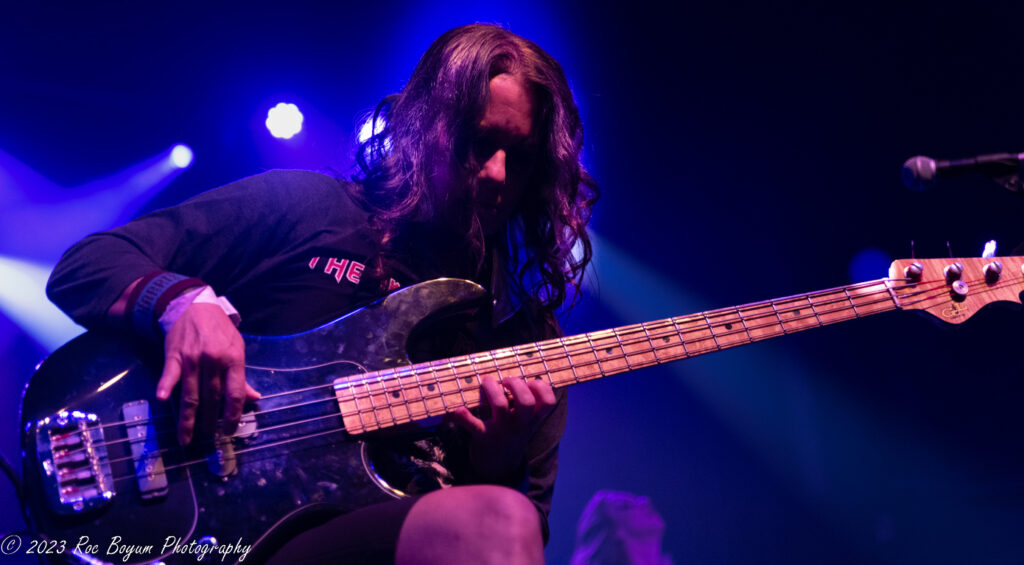 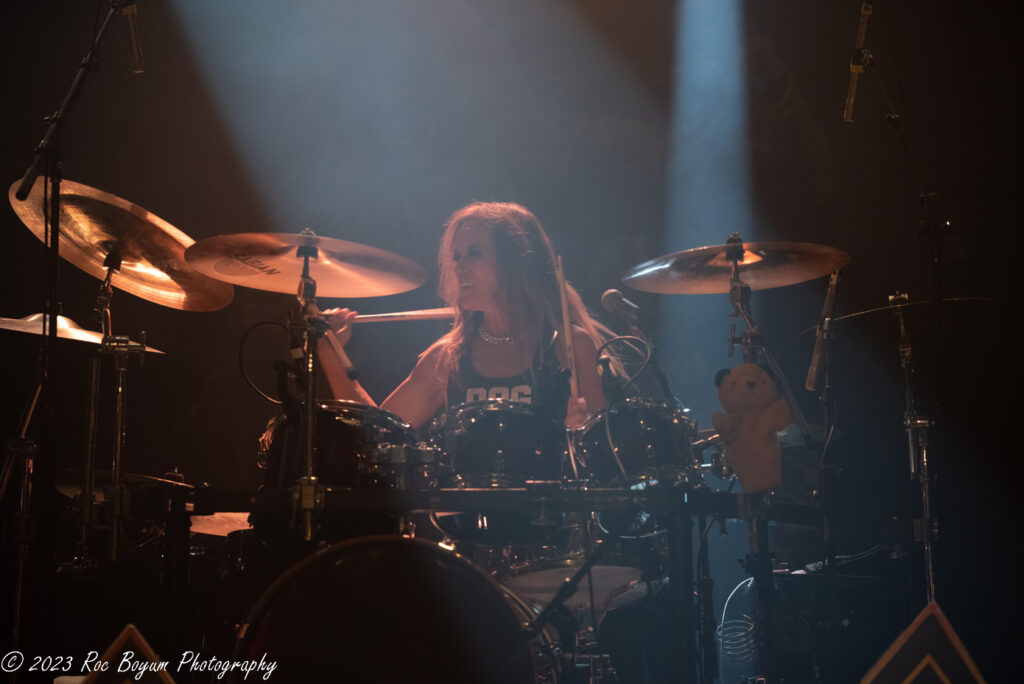 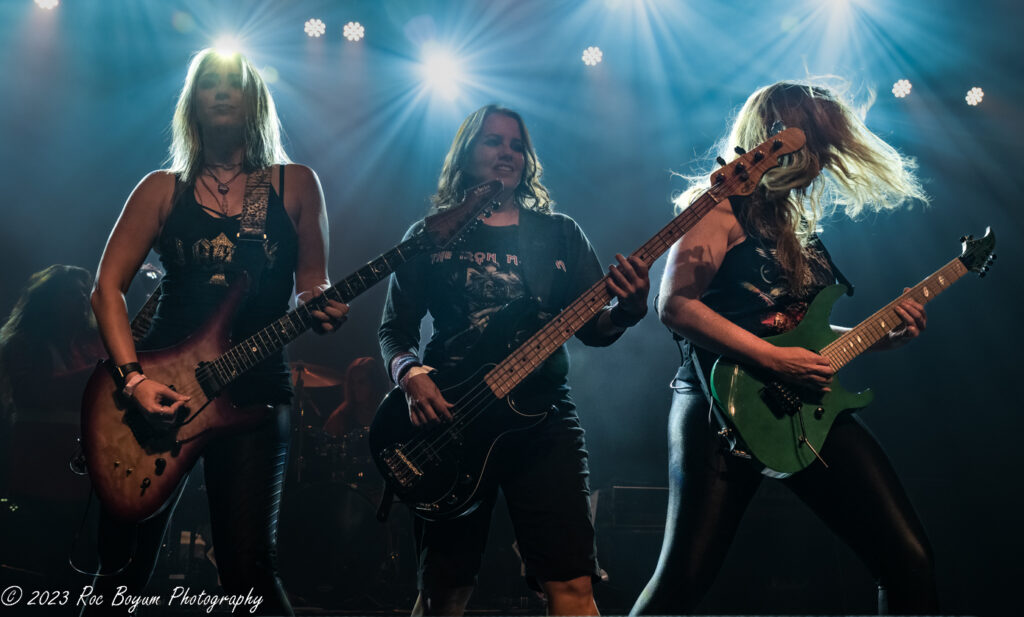 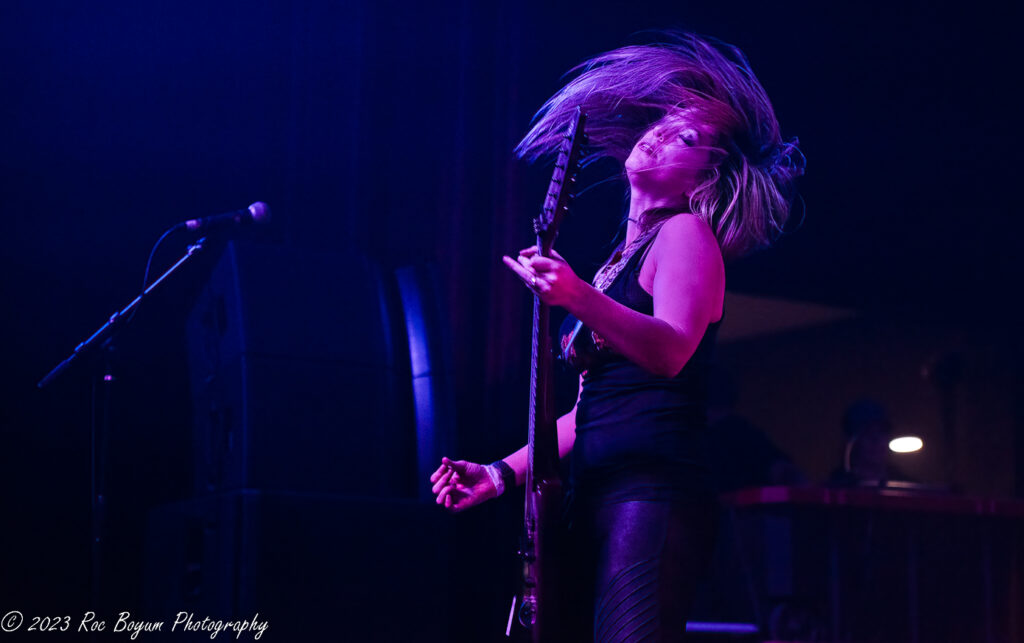 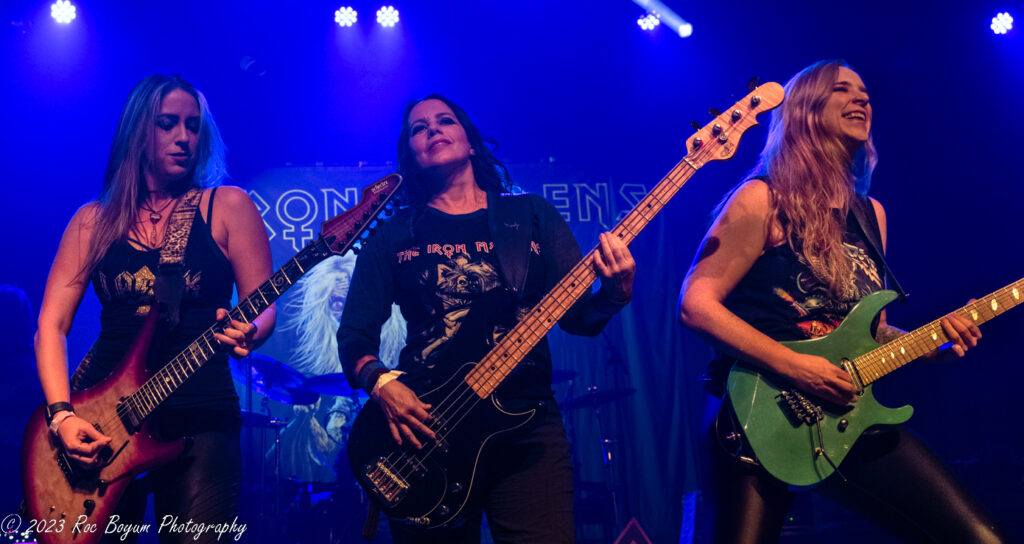 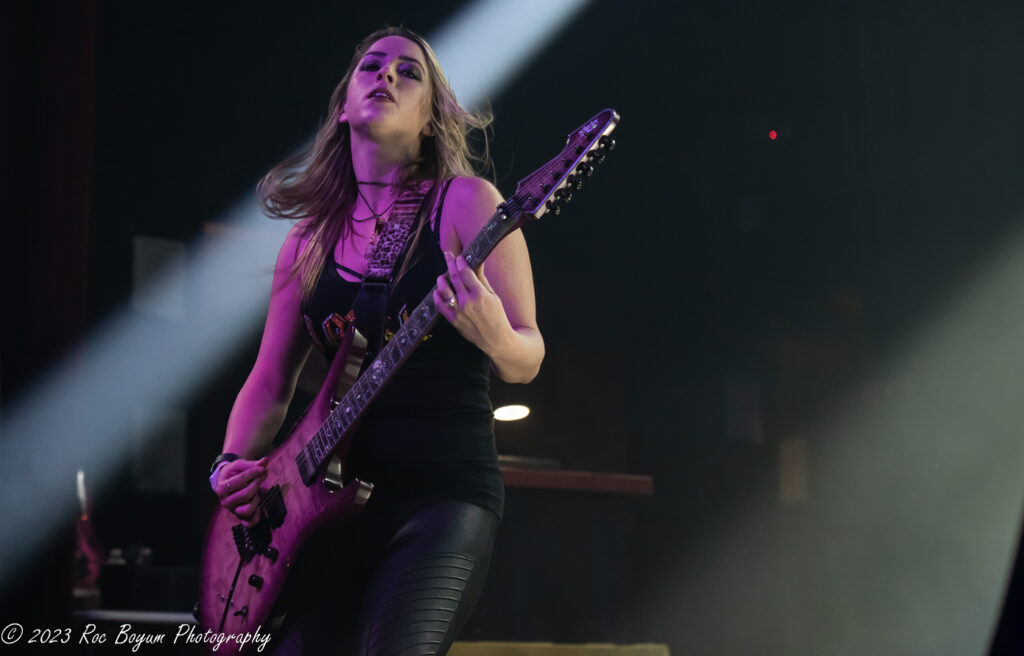 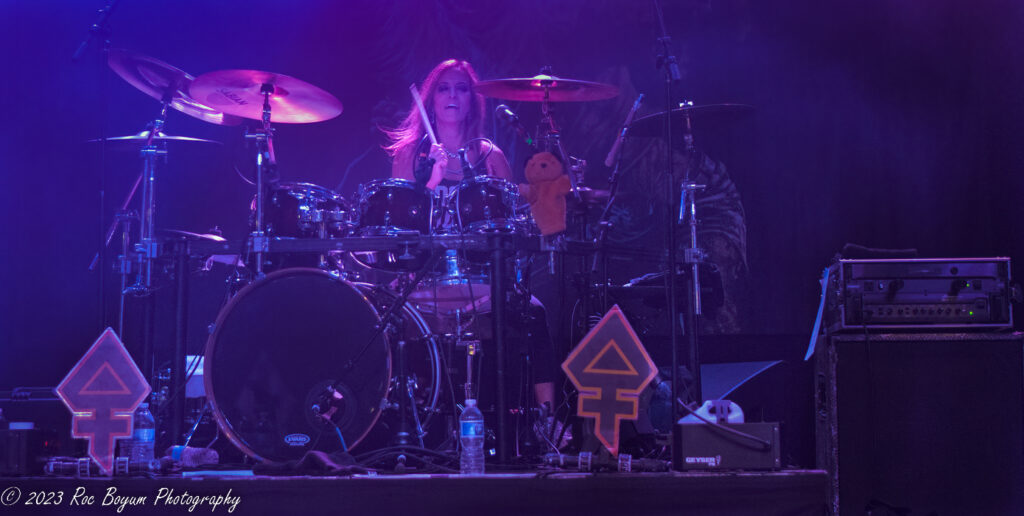 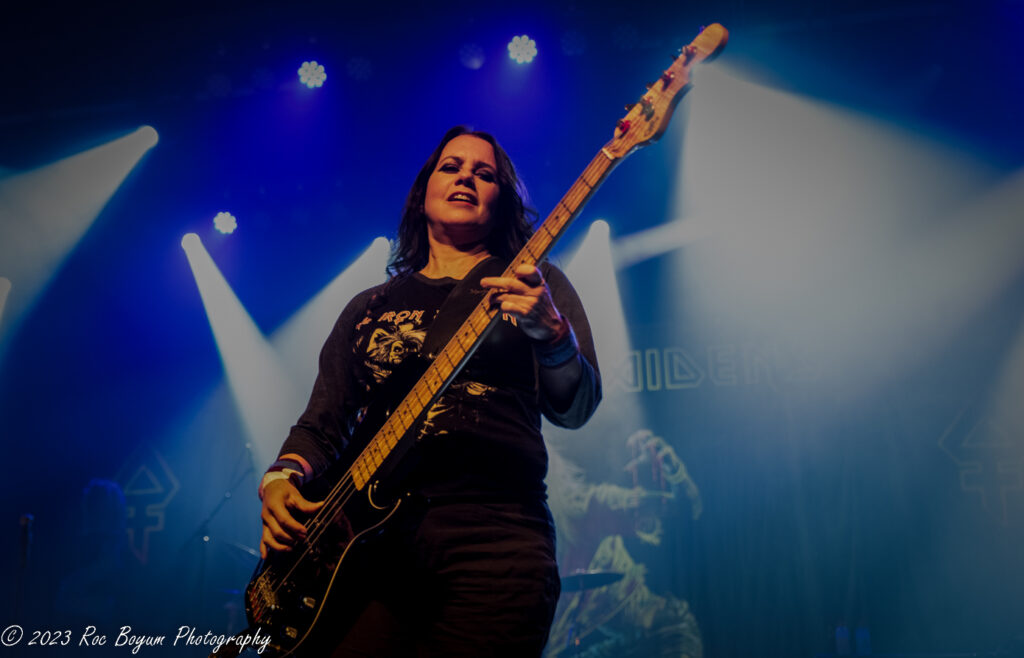 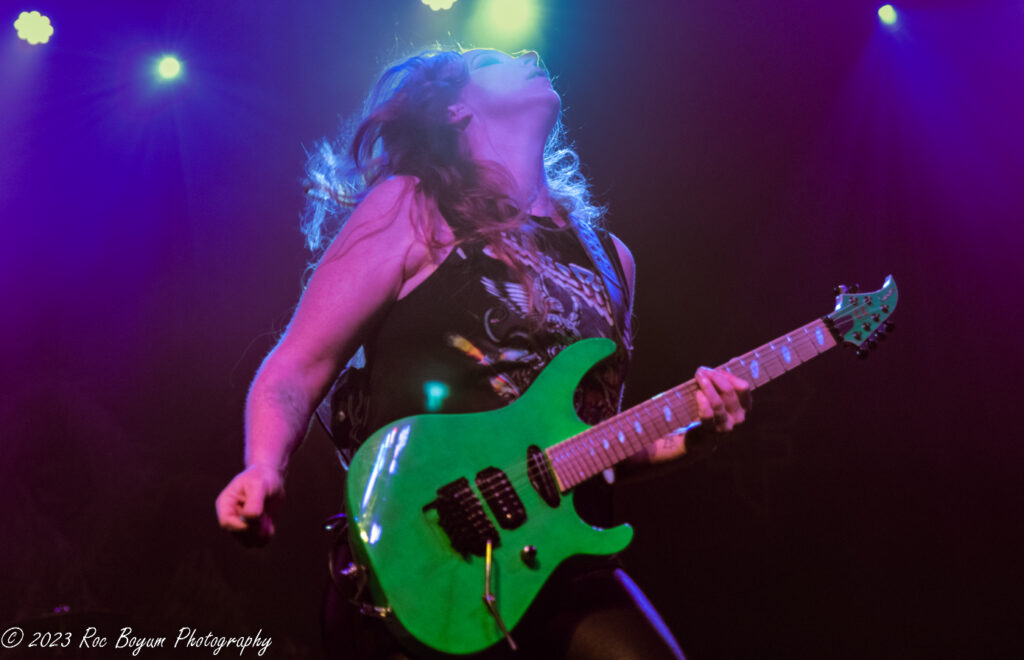 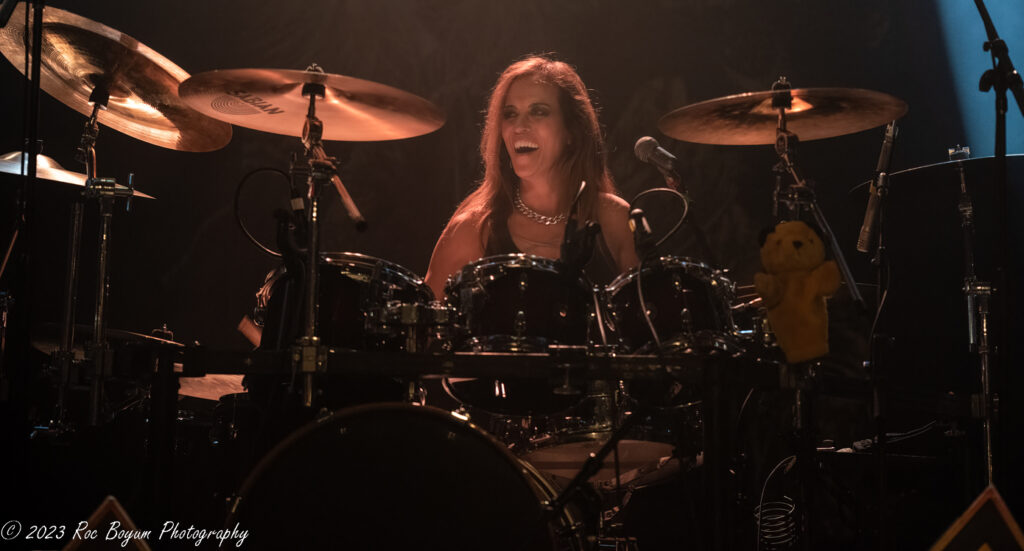 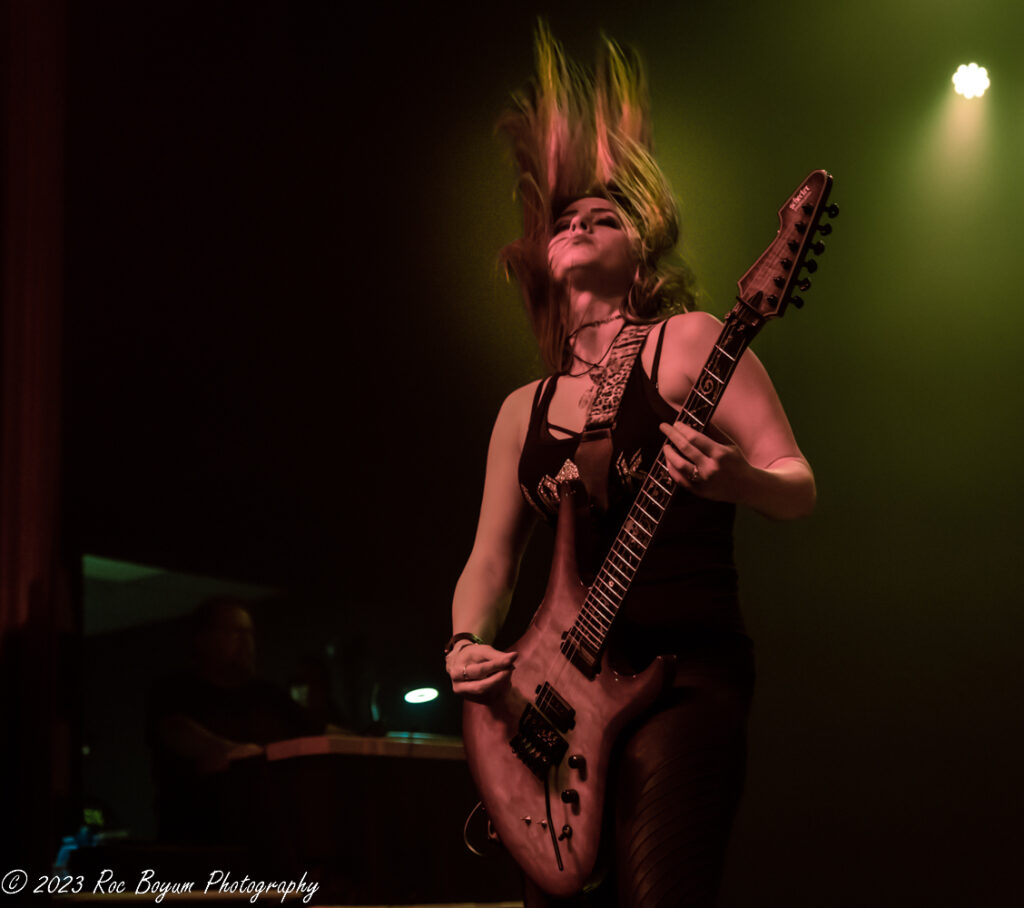 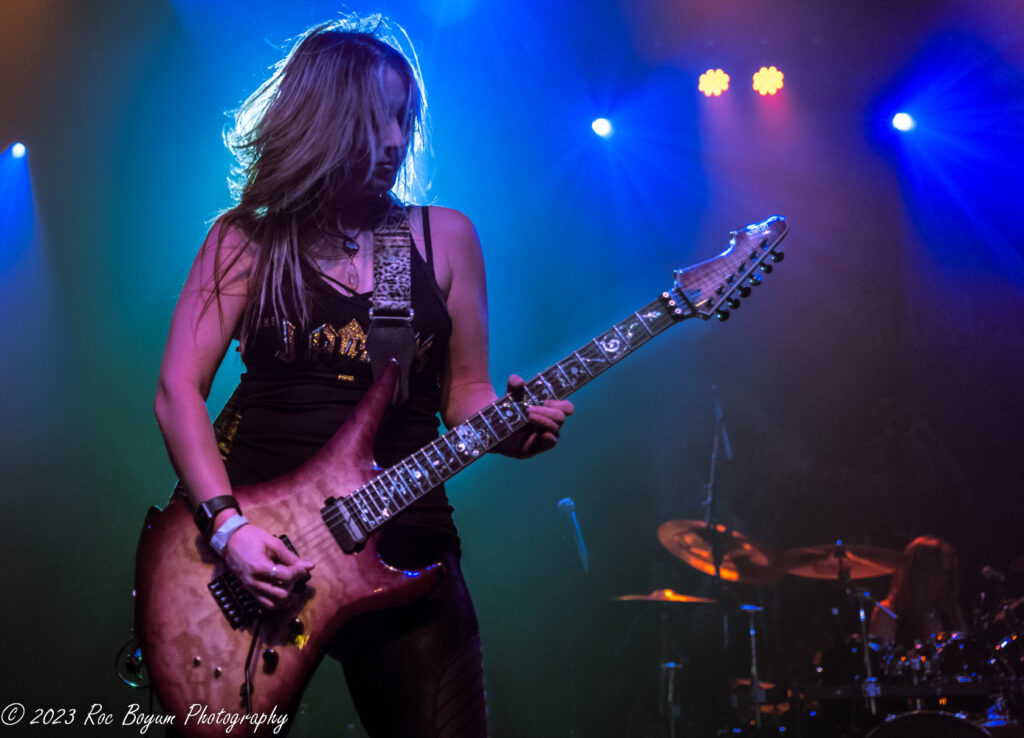 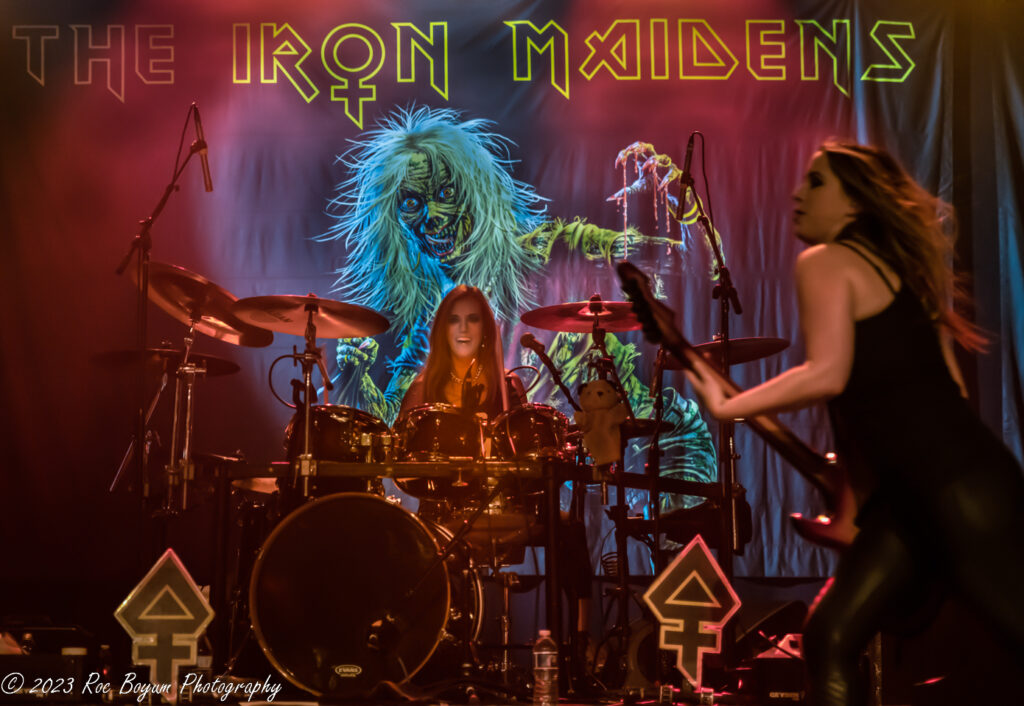