On October 24, 2017 as Los Angeles reveled in anticipation for the Loudwire Music Awards to arrive, the scene outside the Novo Theater was in complete chaos. The Legends, Icons and up and coming stars began to arrive on the “Black Carpet” talking to press and besieged by photographers. LA Metal Media Magazine was fortunate to catch up with The Metal God himself, Rob Halford, who was being awarded the “Lemmy Lifetime Achievement Award.”

Stars Arriving on the Black Carpet 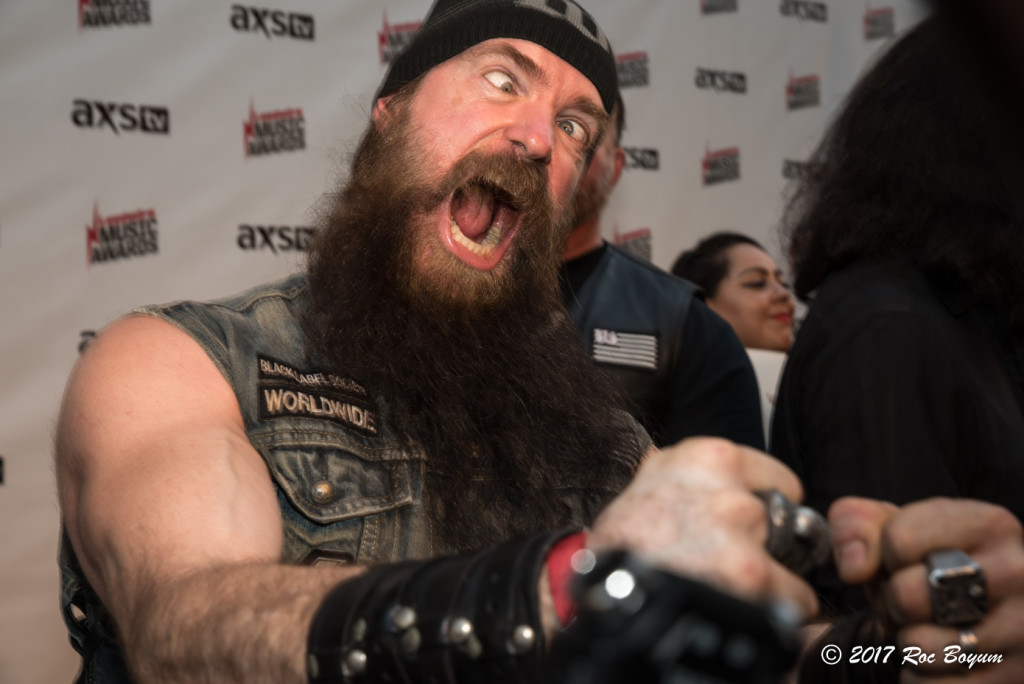 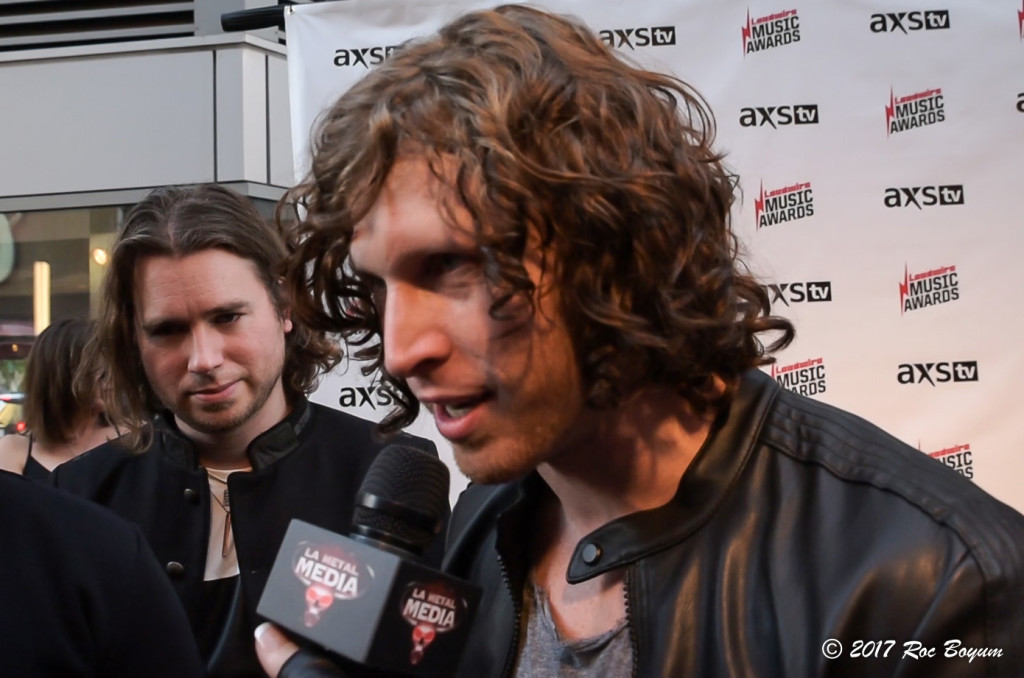 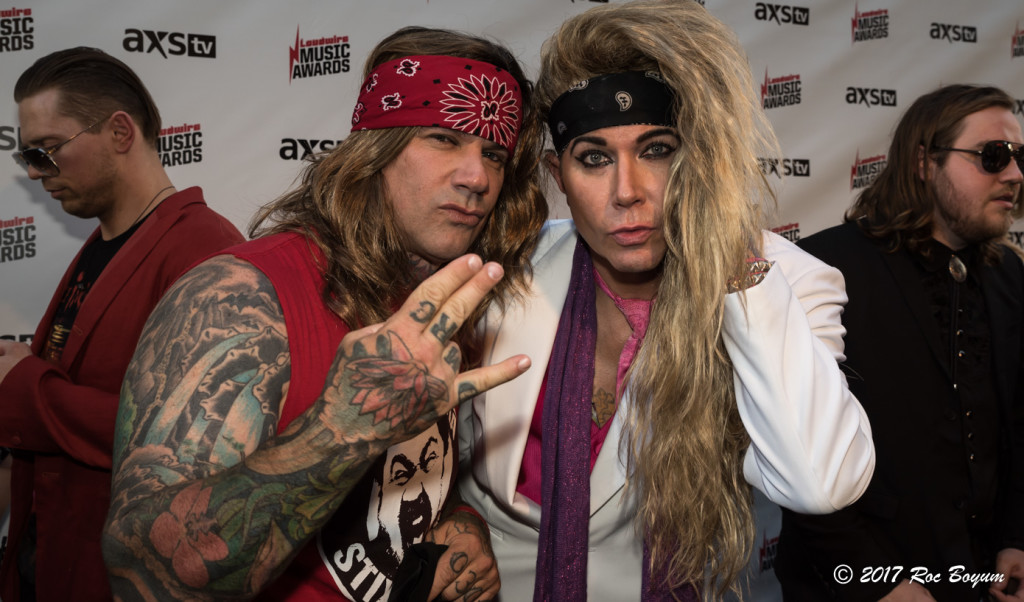 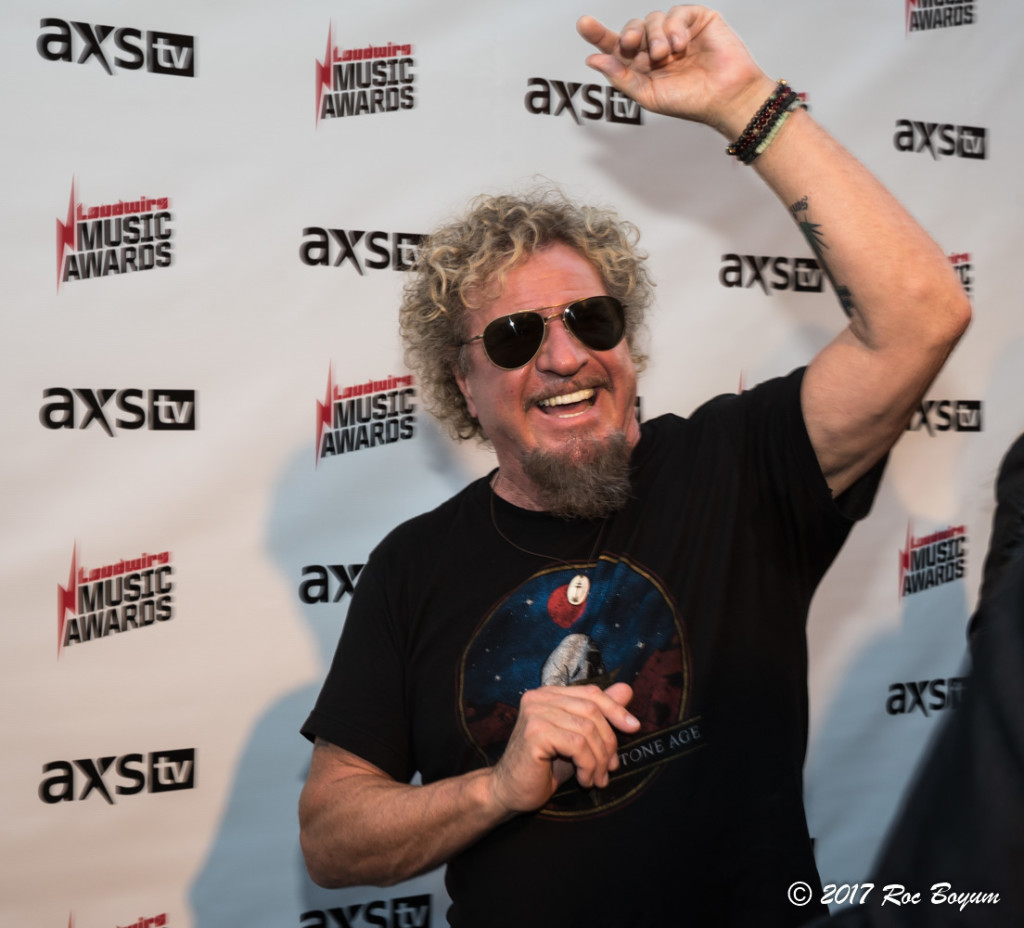 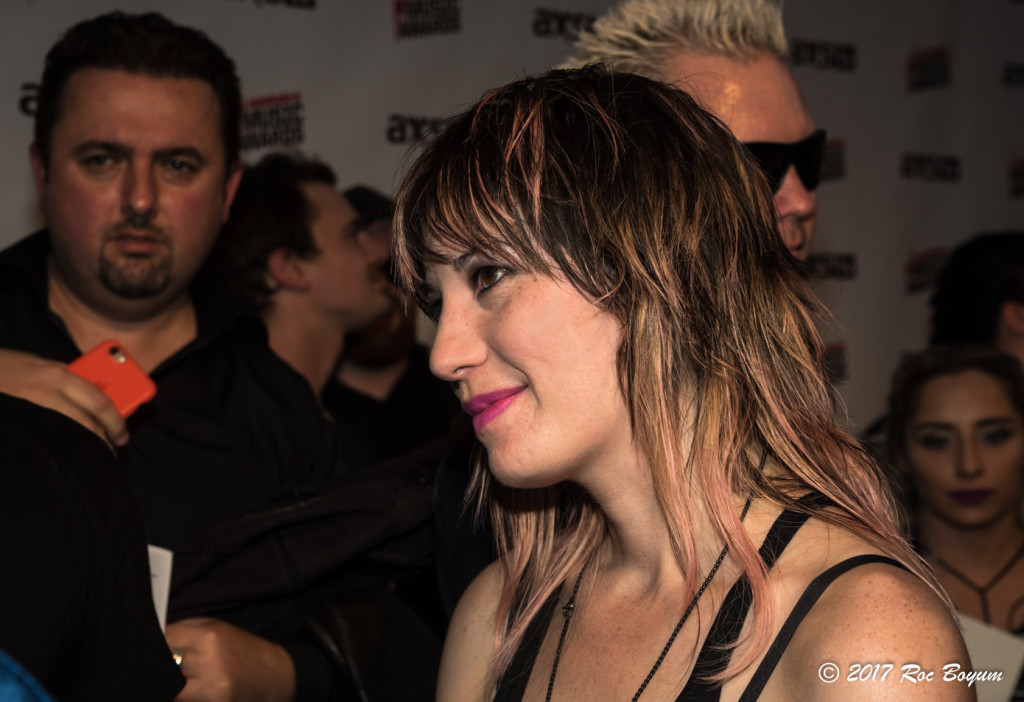 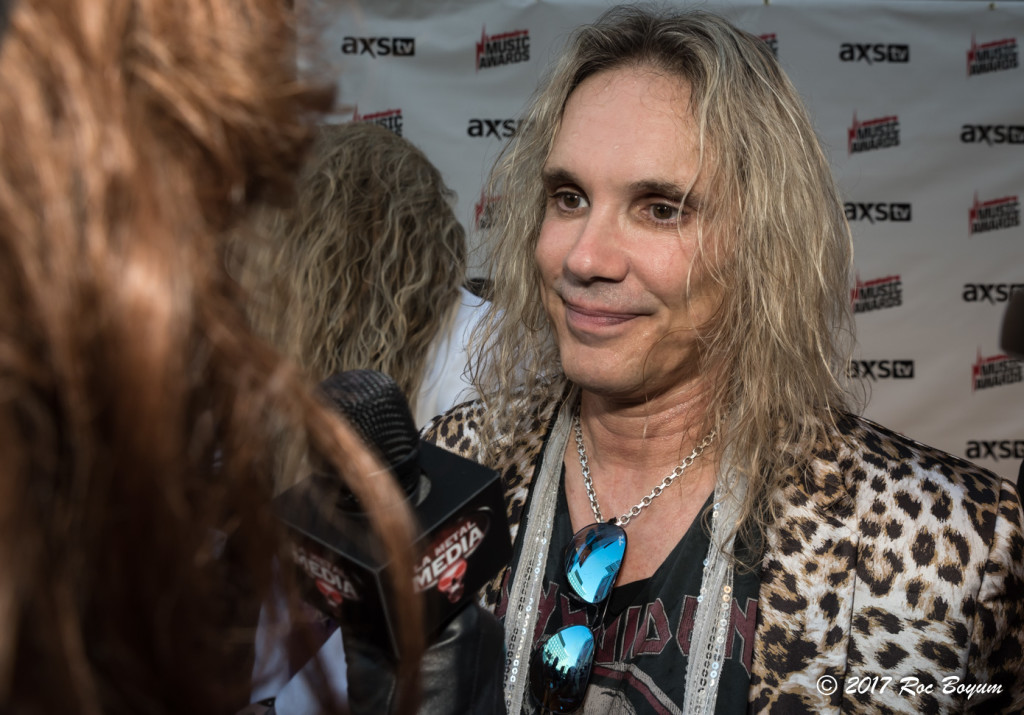 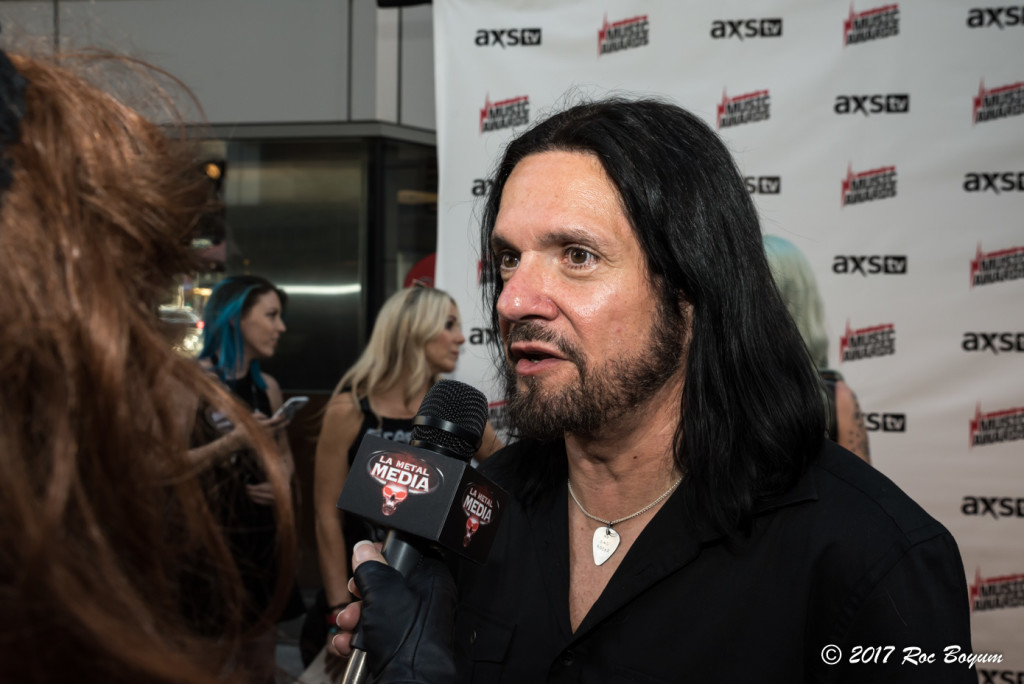 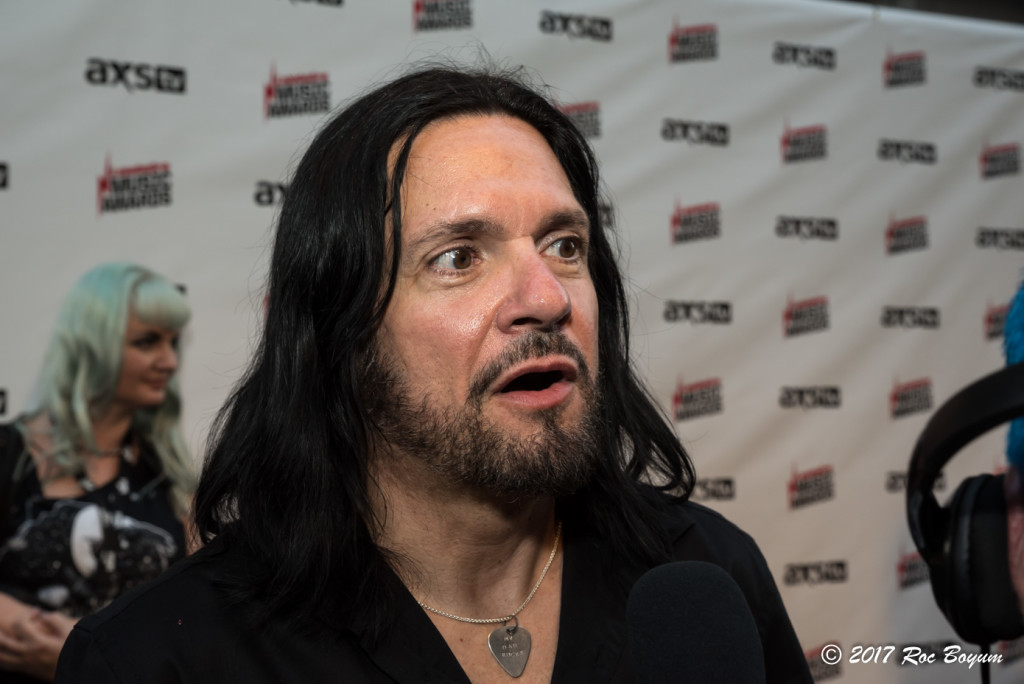 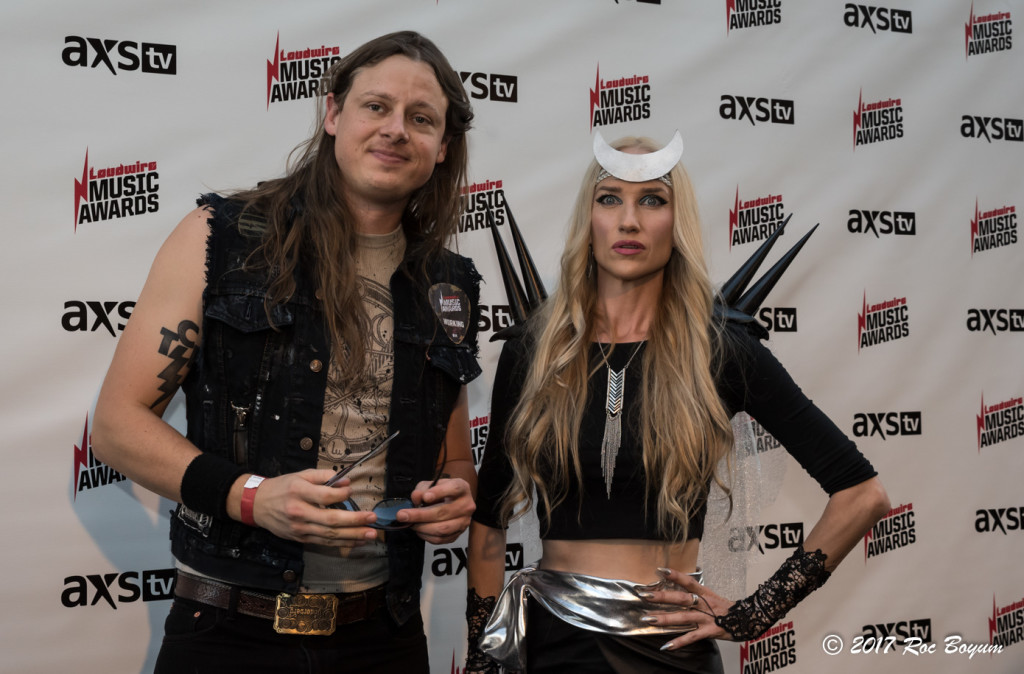 Maria Brink and In This Moment 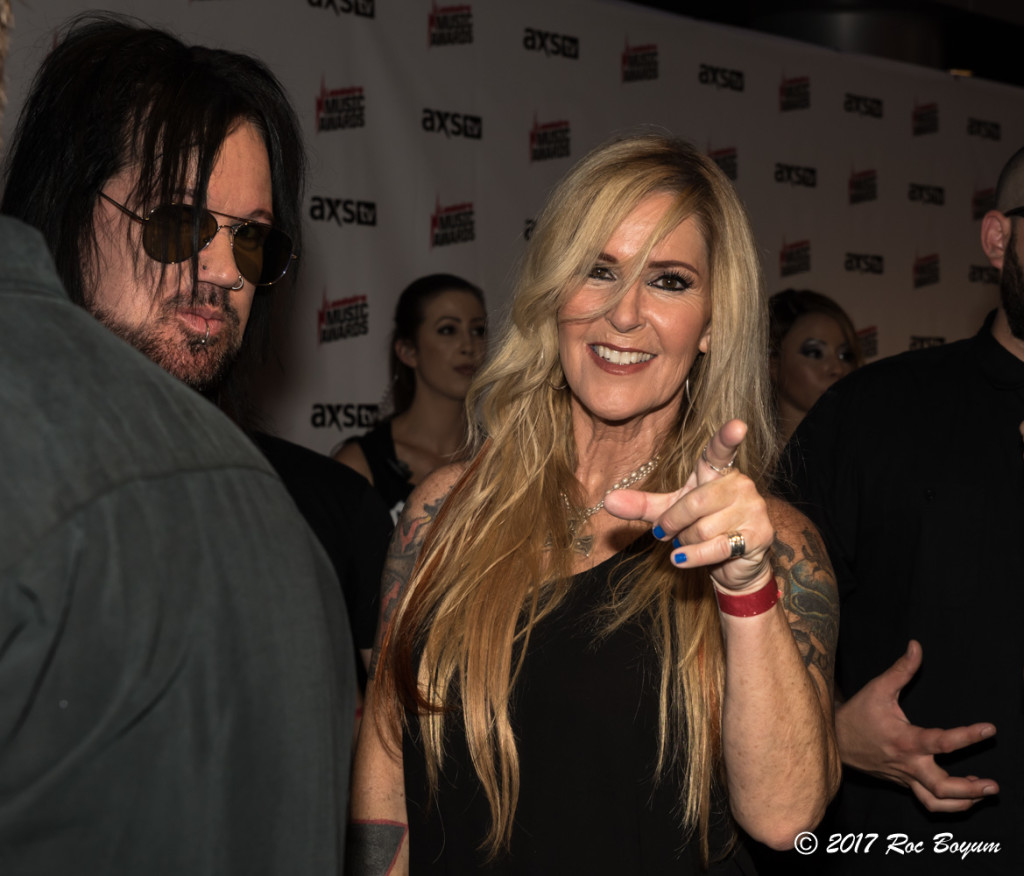 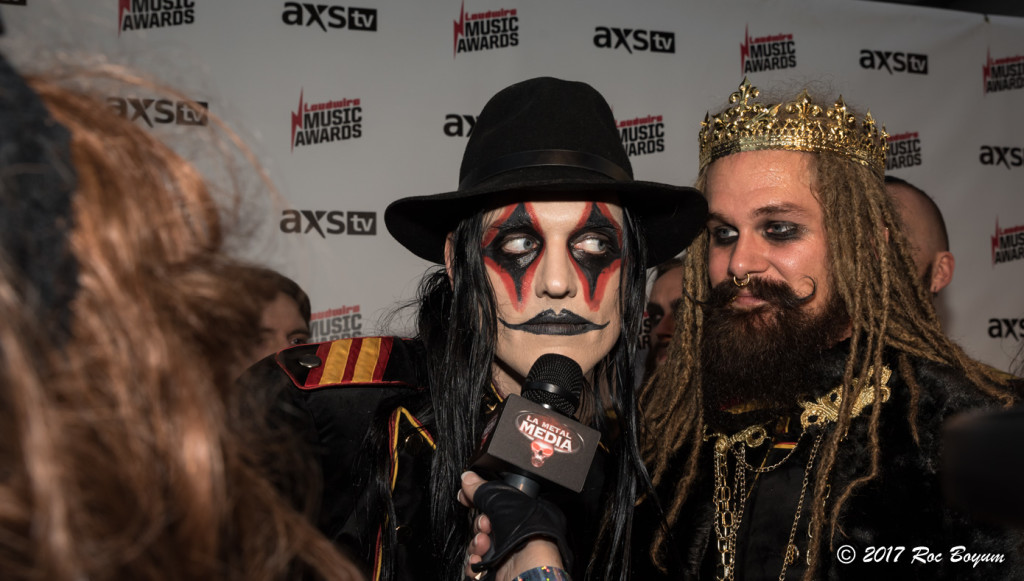 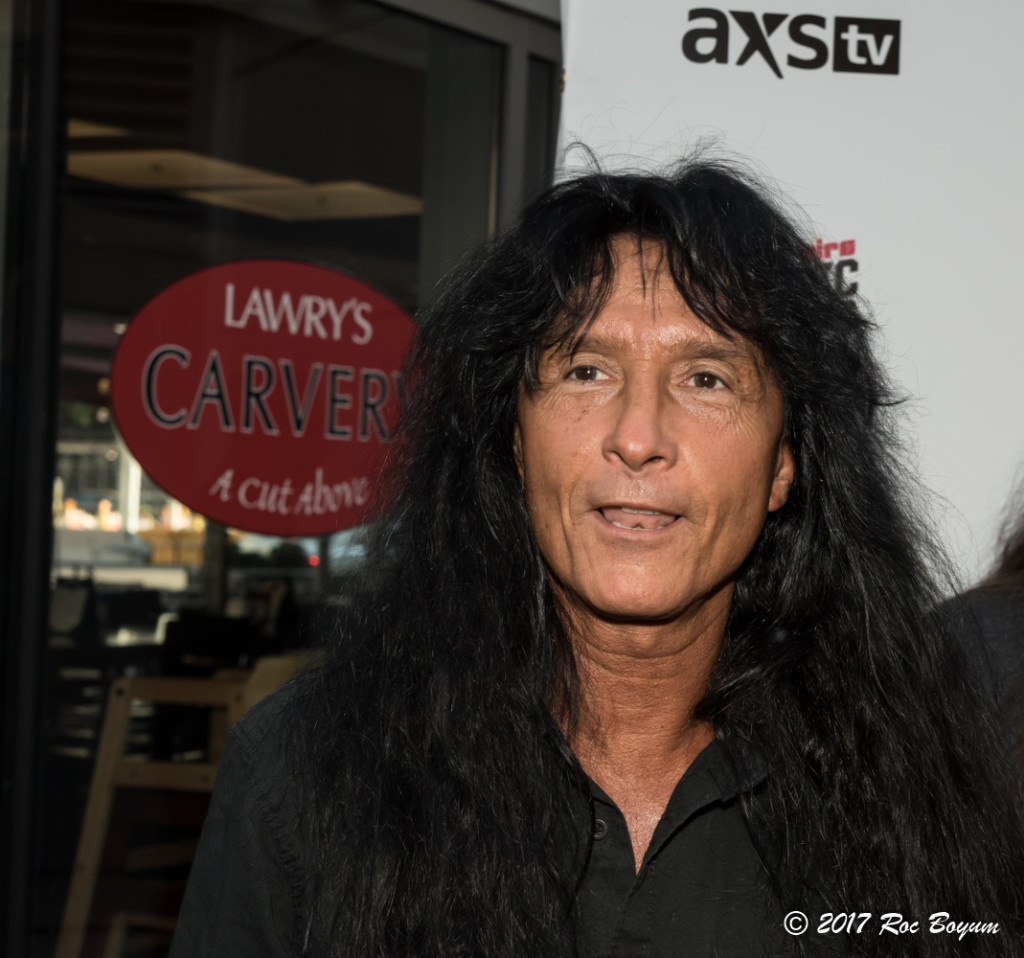 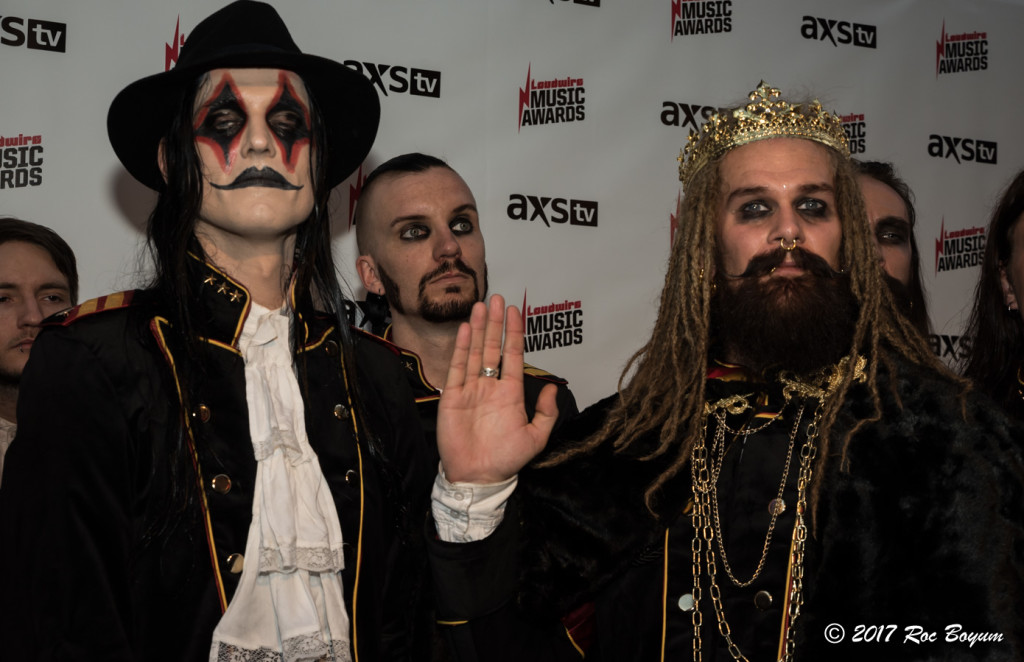 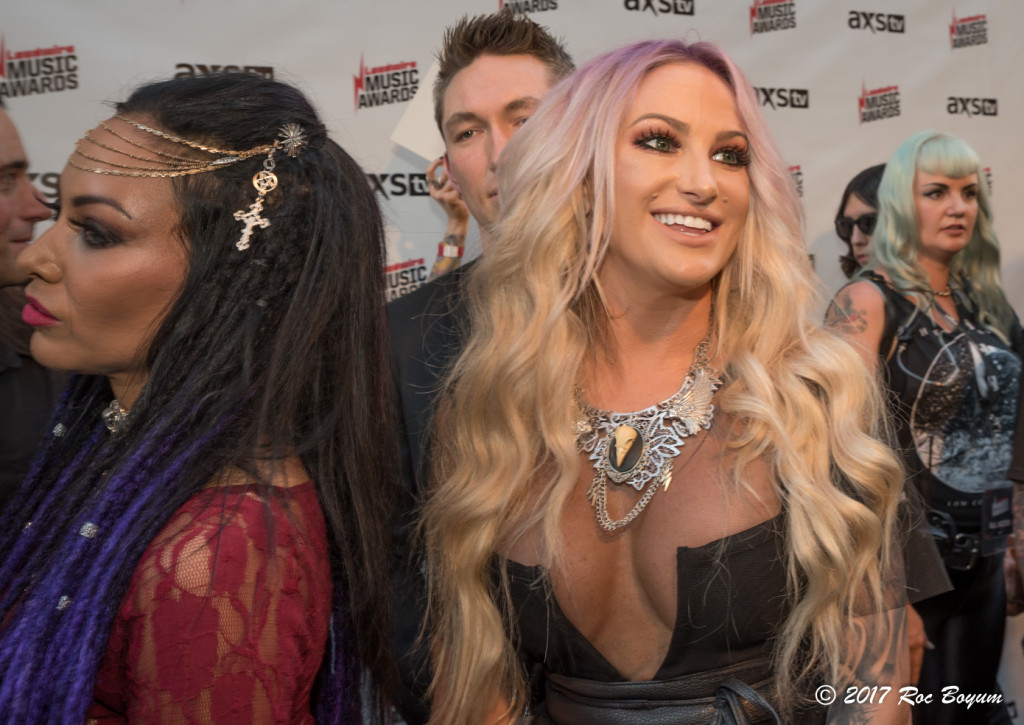 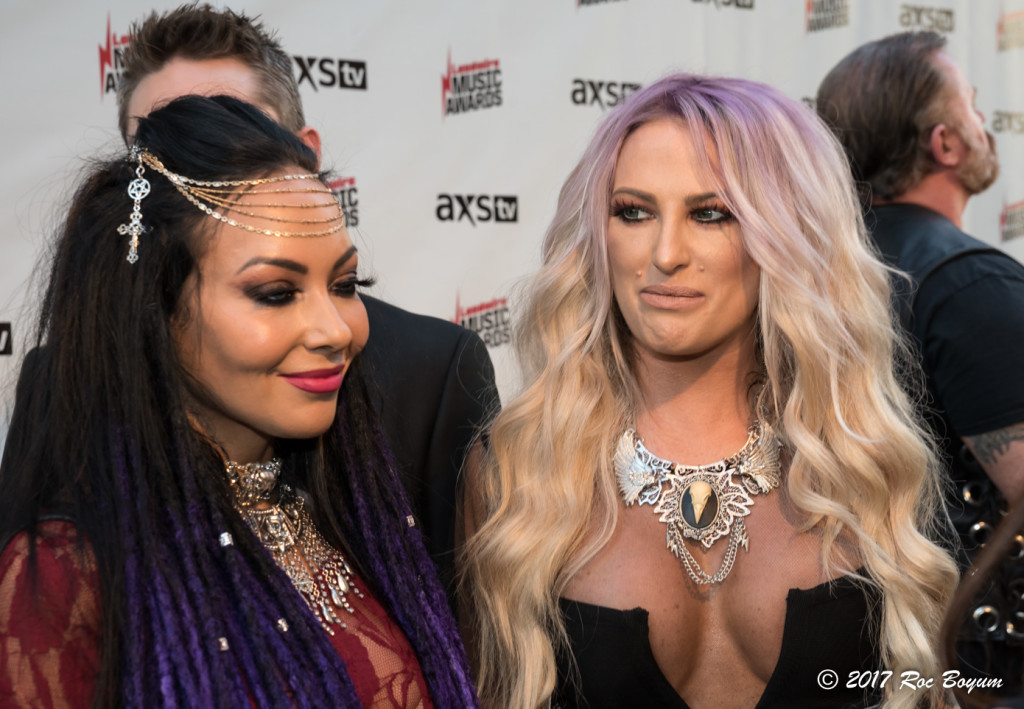 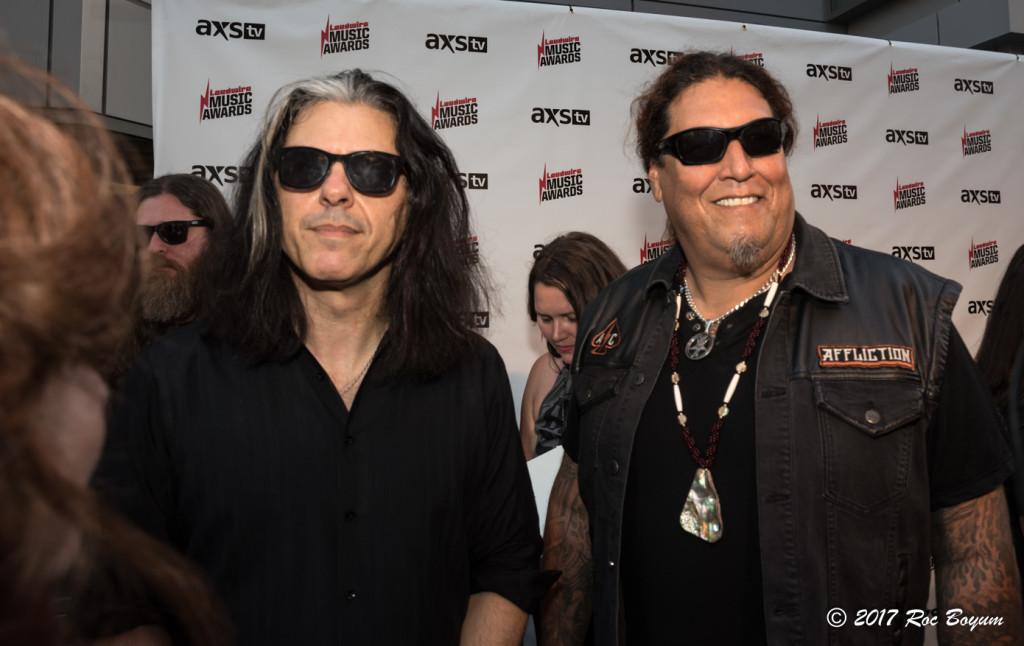 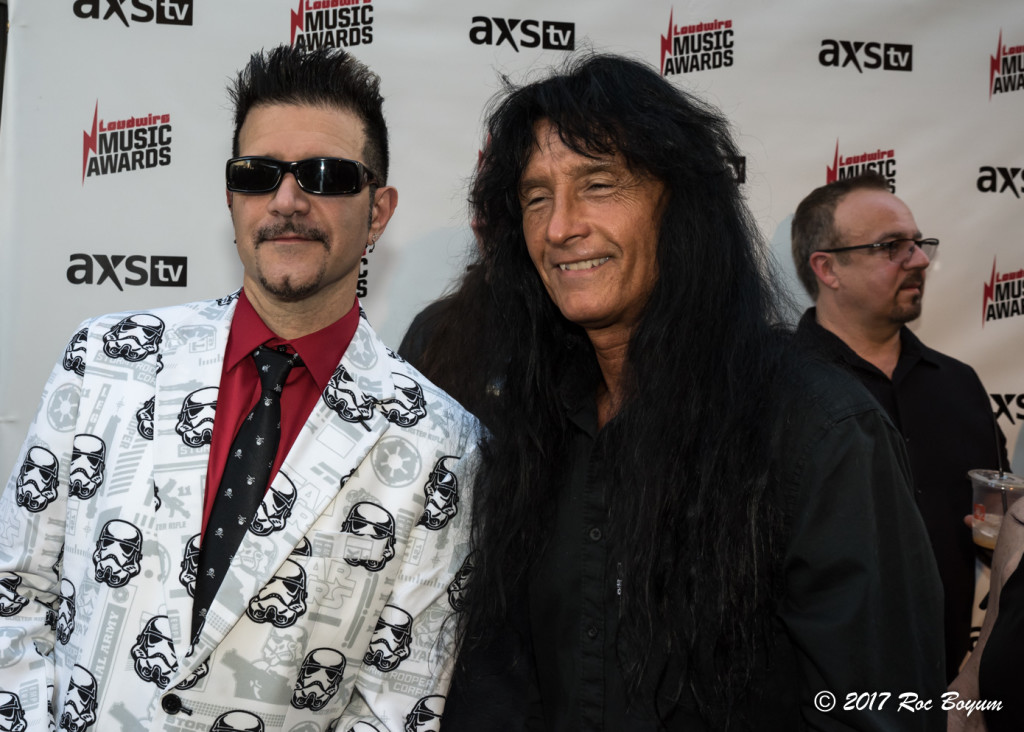 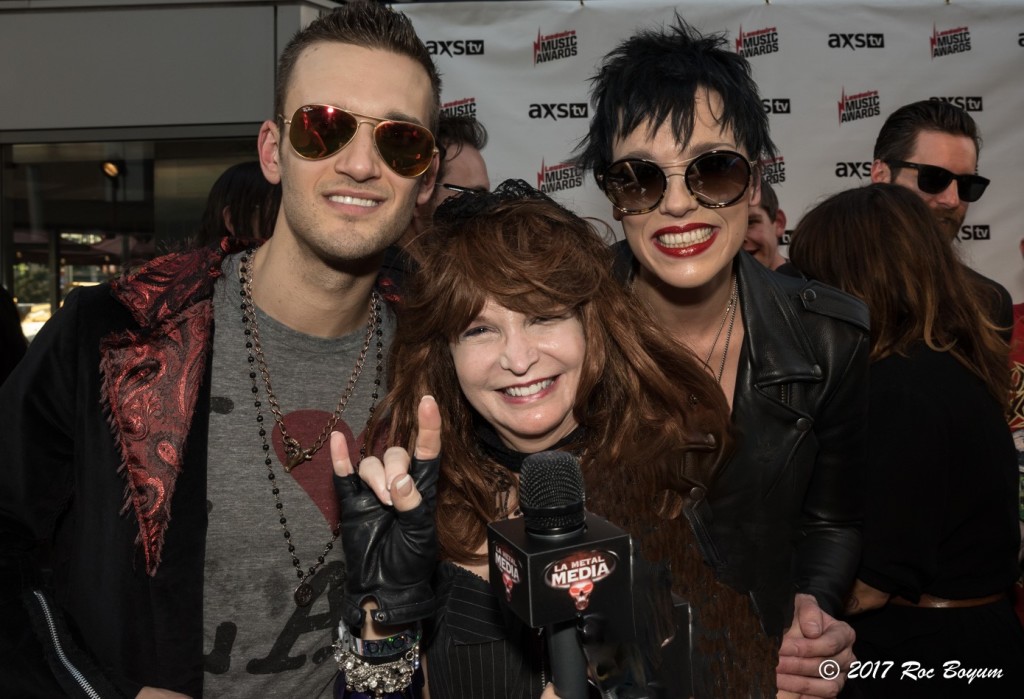 In an Industry completely overlooked by “other” Award Shows it was refreshing to see an entire Award Show Event to honor the Music and Mastery of Hard Rock and Metal.  The City of Los Angeles began buzzing in anticipation several days before the event and the City of Angels was eager to be a part of the event that was to take place in Los Angeles at The Novo Theater on Tuesday, October 24, 2017, with an event that would become the benchmark for the Hard Rock and Metal Industry of Award Shows. In a carefully orchestrated and masterly assembled evening of Live Performances and Presenters consisting of Legends, Icons and up and coming superstars, the entire Novo Theater remained completely transfixed on the Stage and Presenting Podium in anticipation of the evening’s festivities. The Evening began with the incredible video of the making of this coveted Award using the hand flashing the horns of the Black Sabbath Metal Master himself Tommy Iommi. The video illustrated the process using the Mold to create the perfect cast to create the Award Trophy.

Then the stage lit up with the Priest and Priestess of Metal,  Rob Halford of Judas Priest and Maria Brink of In This Moment performing “Black Wedding” a stunning duet off the new In This Moment CD titled “Ritual“ which is a Gothic spin on the Billy Idol “White Wedding.” Maria and her band then performed the song “Roots”  off their new CD Ritual. The night was off to an amazing start with presenter Chris Jericho of WWE and Fozzy fame welcoming the crowd and showing a humorous video featuring the Steel Panther’s expertise in delivering the ballots.

The first Award was presented to Zakk Wylde for Best Guitarist as the crowd went crazy. Amazing live performance by Body Count featuring Ice T and Dave Mustaine followed. Ice-T and his band Body Count performed “No Lives Matter” off their latest release Bloodlust. Then Megadeth’s, Dave Mustaine joined them on stage for the song “Civil War” with an incredible guitar solo bringing his amazing guest guitar solo that was featured on the album to the Loudwire Music Awards Stage.

Following the incredible live performance,  BEARTOOTH were the winners of the Breakthrough Band of the Year.

Next up, The very special Courage Award was presented to Tony Iommi by Zakk Wylde.

The Black Sabbath legendary guitar riff master Tony Iommi has been called the man who invented Heavy Metal and was to be presented a very special Award this night, The Courage Award. Iommi was honored with the Courage Award for continuing to play heavy metal throughout the years, even through a battle with cancer. Iommi came out to accept the award with a quick story about how the award was formed and his hand getting briefly caught in the mold during the process. Amazing and humble, and truly an incredible representative for this Courage Award. Next, a live performance by Nothing More, a band from Texas whose song “Go To War” was nominated and performed live on the Loudwire Music Awards Stage. This song was also featured in the “Planet of The Apes Trailer.” Their live performance also included a wild distorted version of Skrillex’s “First of the Year” – Prior to the performance frontman Jonny Hawkins commented – “Loudwire is on the forefront of rock, always sharing news about the best things in our genre, so we’re honored that they asked us to do this show… Can’t wait!”

In what would be the first tribute to Chris Cornell of the evening, NOTHING MORE  invited OF MICE AND MEN’s AARON PAULEY to the stage as they performed a rousing tribute of AUDIOSLAVE’s “Show Me How to Live” in honor of the late CHRIS CORNELL.

After the Event shaking performance, the Award for Best Bassist went to IRON MAIDEN’s STEVE HARRIS. Then it was time to honor the Metal God himself ROB HALFORD of Judas Priest. As HALFORD was presented with the inaugural “Lemmy Lifetime Achievement Award” he paid homage to Lemmy Kilmister, the man the award is named after, looking up and shouting “Lemmy.”

Rockers Congratulate The Metal God On His Award

Halford then thanked the fans, by saying “The fans are the lifeblood of what we do…” The evening continued with STARSET, and frontman DUSTIN BATES and his spacesuit-wearing band performing “Satellite” and “Ricochet.”

Two of the night’s biggest awards came next,  “Metal Song of the Year” up-and-coming rockers POWER TRIP took home the Award for “Executioner’s Tax” and  I PREVAIL was awarded “Hard Rock Song of the Year” with “Alone” and accepted via video.

POWER TRIP took the Loudwire Music Awards stage to perform “Executioner’s Tax (Swing of the Axe)” and followed it up with a special pairing of HATEBREEDs JAMEY JASTA on a cover and tribute to  MOTÖRHEAD’S “(We Are) The Road Crew,” reminding everyone that “Lemmy” was still in the house.

Then came another huge win for IRON MAIDEN, for “Best Live Band” which followed on the footsteps of the STEVE HARRIS’ win earlier for best “Bassist.”

One of the absolute standout moments of the evening was the emotional presentation of the Award for the winner of the “BEST VOCALIST.”

The late CHESTER BENNINGTON of LINKIN PARK won the award for “BEST VOCALIST”, with HALESTORM’S LZZY HALE, presenting the moving tribute to BENNINGTON. Hale offered some moving thoughts about the late singer; “All of us, we have terrible beasts and demons and vices that we battle daily. As humans we have a responsibility to everybody, to each other, to lift each other up. We are in this fight together,” said HALE who also used her speech to make a call-to-action to stop cyberbullying and speaking about the power that words can have in a negative and positive manner.